A. What is Trail Orienteering (Trail-O)?

The International Orienteering Federation (IOF) has official rules for four types of orienteering, namely foot orienteering (foot-O), ski orienteering (ski-O), mountain bike orienteering (MTBO), and trail orienteering (trail-O). Foot-O is the classic running from controls (checkpoints) to controls, which is the type of orienteering that we do the most often. Ski-O is not for a sub-tropical guy like me. MTBO requires intricate network of bike routes, which can be quite hard to find locally. Yet, trail-O can be friendly in many areas.

Basically, trail-O is a multiple choice test, where all questions are in the following form:

Q: Which of the following flags best describes the circled point on the map and its description?

If there is one flag, the question boils down to true or false:

There are two types of trail-O: precision-O (pre-O) and temp-O. In this blog, I will cover mostly on pre-O. One main difference of pre-O from foot-O is that walking off-trail is not allowed. Another difference is that the course can be completed in walking pace. Trail-O (pre-O or temp-O) is mostly a mental test. In fact, if the trail is flat and smooth enough, people who has handicap in mobility can participate in trail-O.

Whoever answer the most correct answers wins. If there is a tie, the timed control (TC) is used as a tie breaker. Finishing the course quickly has nothing to do with winning, except TC.

It was nice that I could go outdoors on this day, since I just got off from a long flight the day before, and I still needed to adjust the jet lag. Knowing that I did not need to run today, I even wore jeans to this event. After all, this was my first time to participate in trail-O, and I registered the beginner course. Dressing like a beginner should be fine!

The event center looked typical. I had to claim my number tag and a punch card. The punch card is the multiple choice answer sheet. 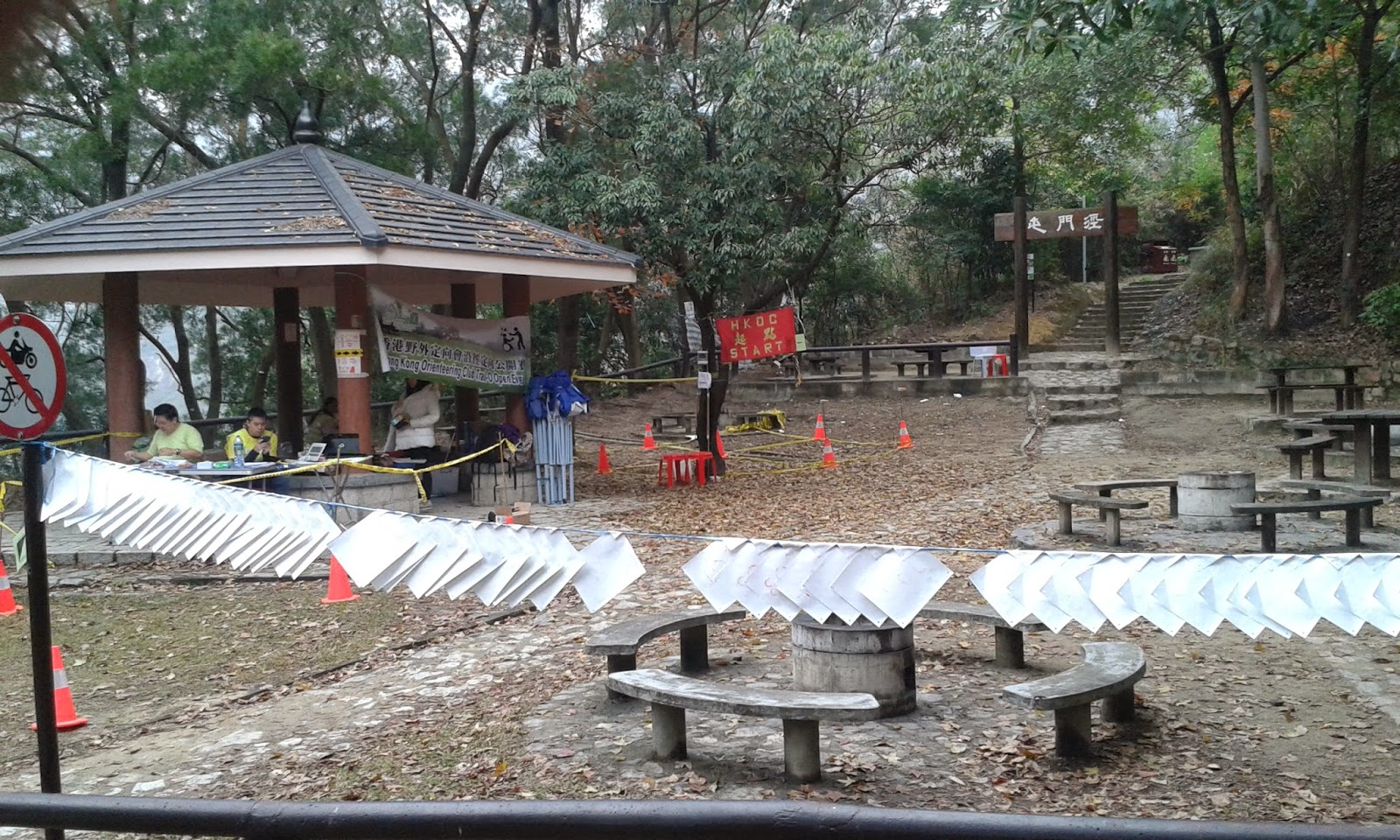 The following shows how the start area look like. Competitors move forward one space after one minute. In this case, I had to arrive two minutes before my start time. 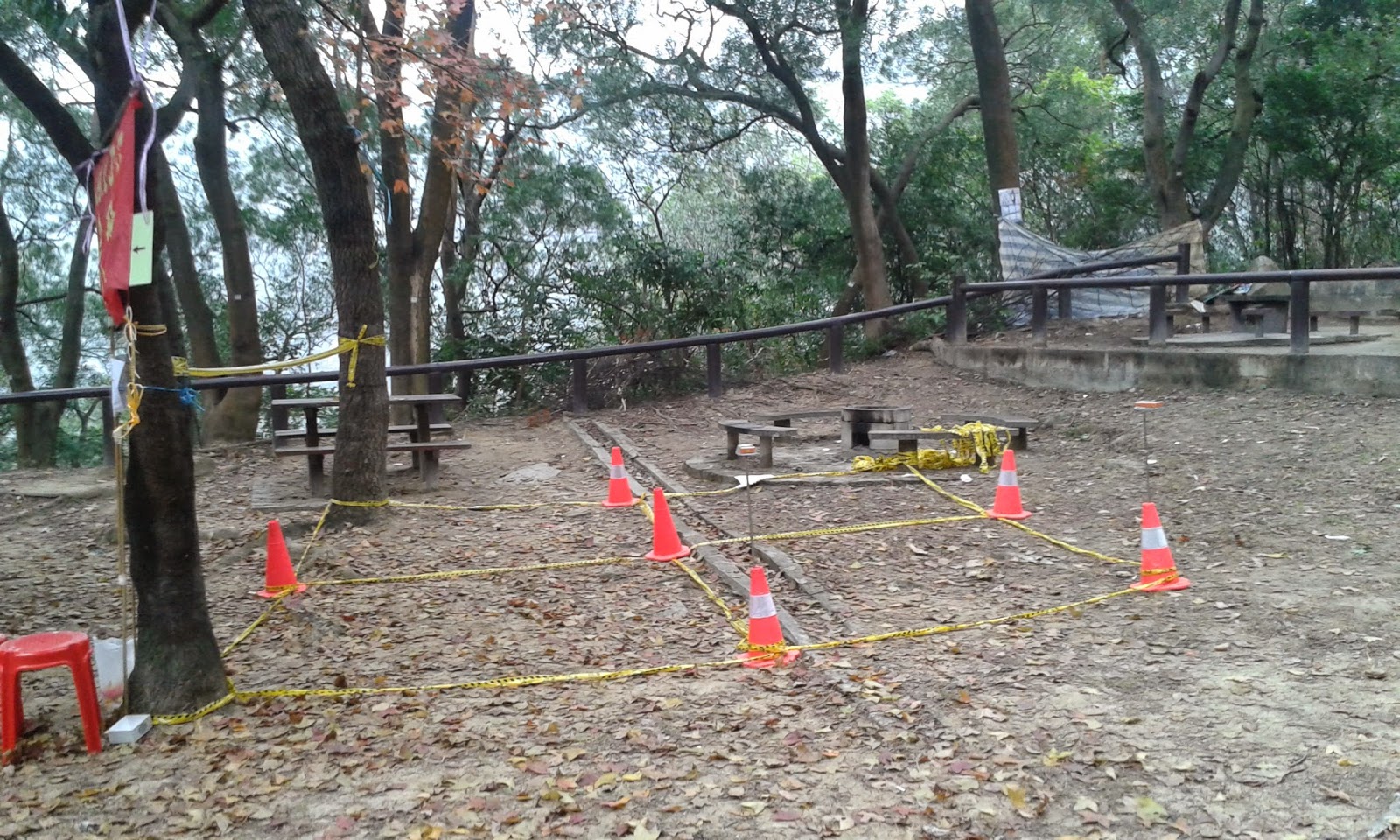 C. In the Course

I could only read the map after I started. Here is the map (I hope I can scan the map for better quality, but I cannot find a place to do it. I will certainly do it after I return to the U.S.): 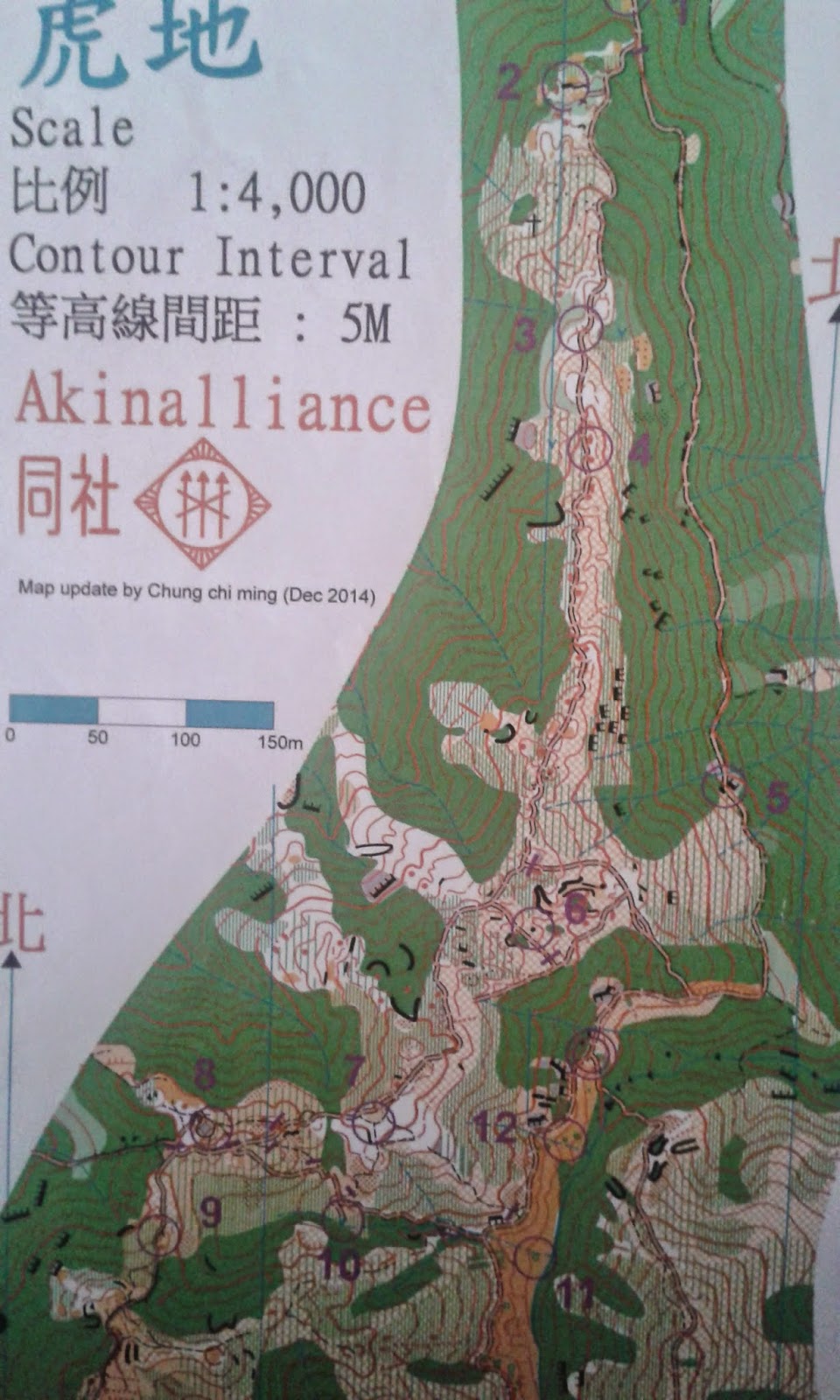 Here is the control description: 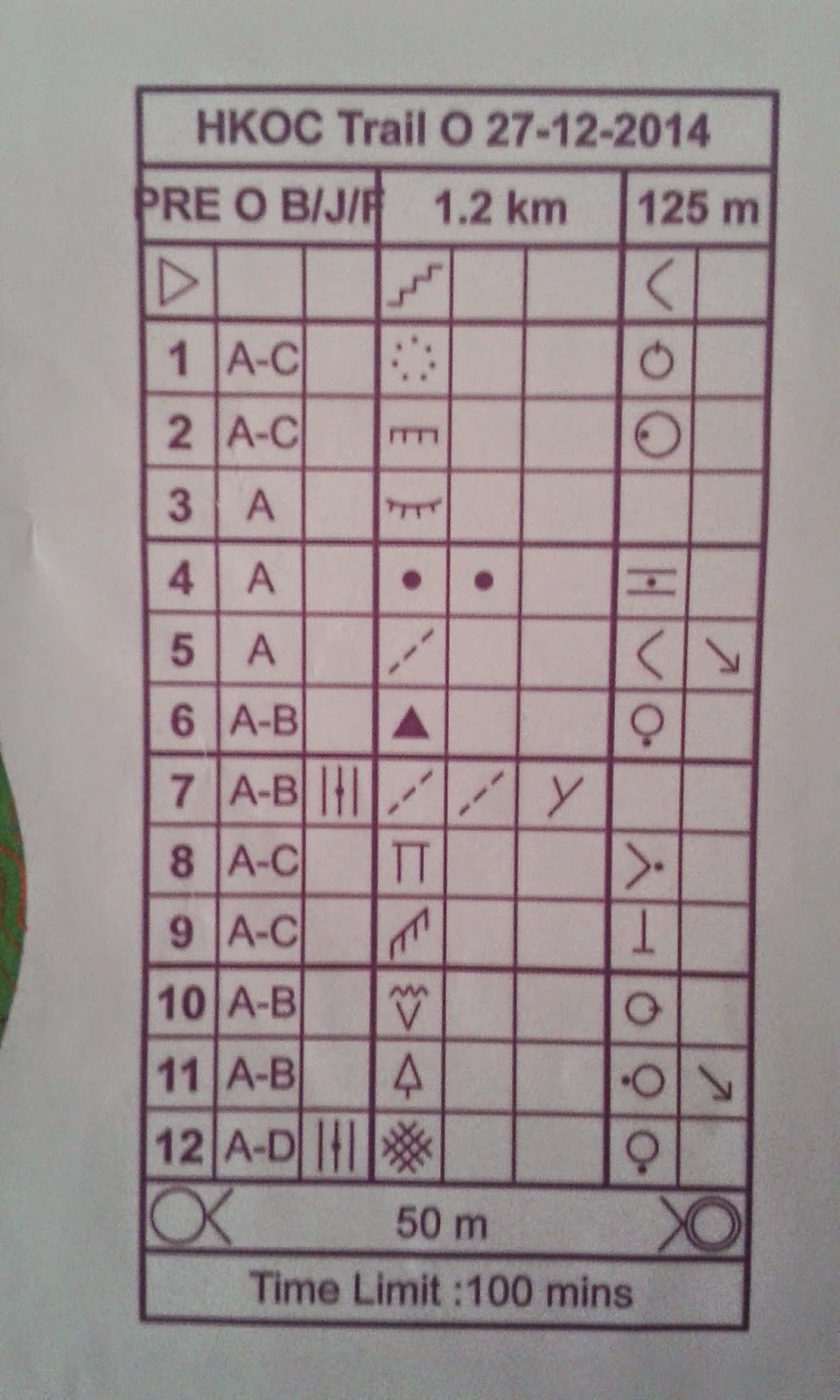 The map looks very similar to foot-O. The control description looks slightly different. The control number column is replaced by the choices of flags (e.g., Control 10 has 2 flags: A and B). The last column may also show the viewing direction.

Each control has a decision point (DP) that is not marked on the map. Here is an example for Control 9 (picture taken after finishing the course): 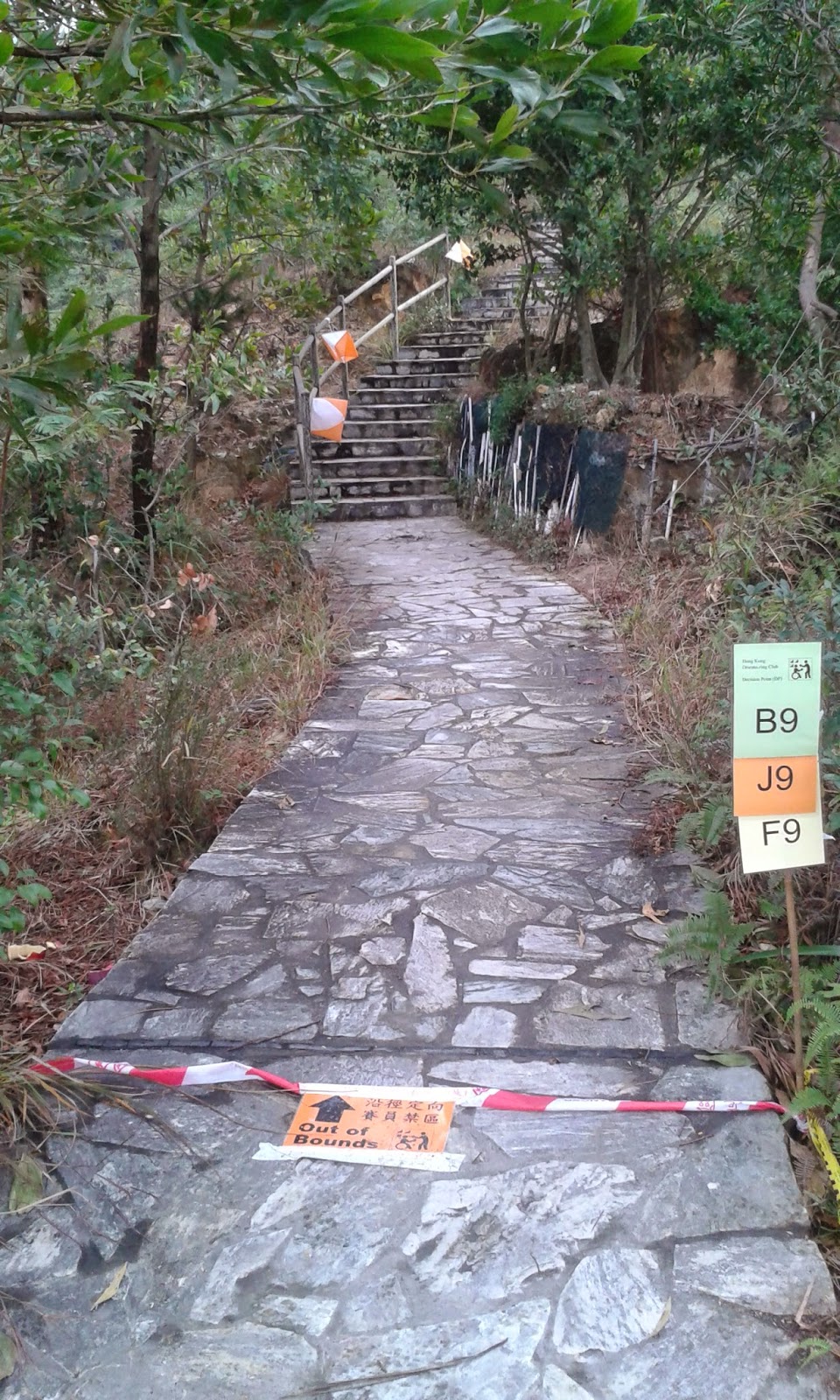 The sign on the right shows the location of DP. DP is only used to view all the candidate controls and decide the flag coding. Flag A is always the first flag from the left, viewed at DP, then Flag B, C, D... can be counted to the right. In this picture, the highest flag is Flag C.

The course also contains out-of-bound areas, usually forbid competitors from getting close to the candidate controls.

So, which of the above flags is correct? A, B, C, or none of the above (Z)? Hint: according to my compass, I was viewing to the south.

To answer the question, you need to read the map and control description. If you do not know the IOF symbols, they translate as "south end of fence" for Control 9. With this, one can easily identify that "C" is the correct answer, since the picture was taken to the south, and Flag C was really at the south end of the fence.

The above control was easy, but there were some harder ones. Let me show another example: 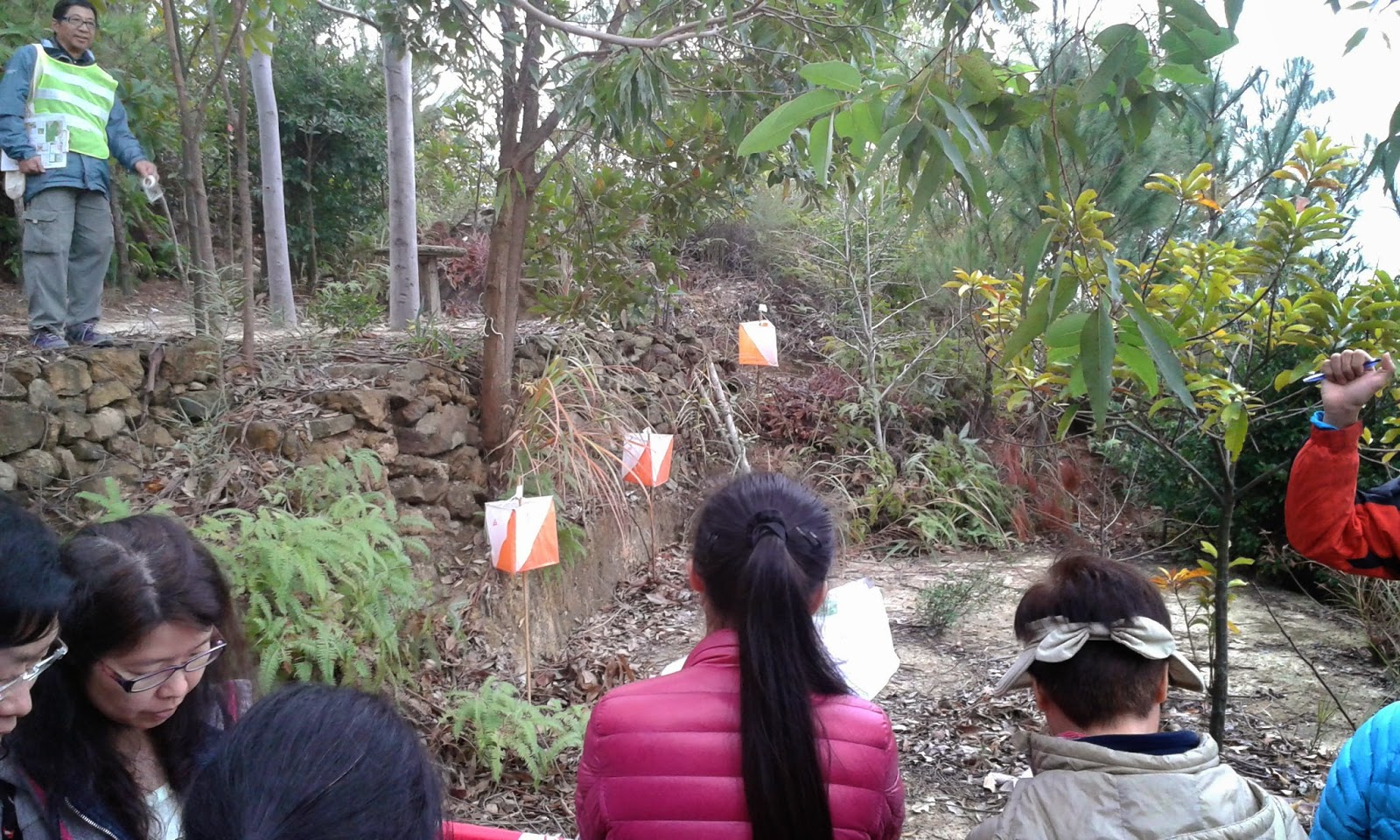 The DP was only a few steps on the right, so you may treat this picture taken at the DP, i.e., the closest flag is A, and the furthest flag is C.

What is the answer?

This question illustrated the importance of control description. The solution is: A is at the cliff (meaning the center of the cliff); C is at the west end of cliff. The answer is B, which describes the west part of cliff. To do well in this trail-O multiple choice test, knowing the definitions of control descriptions is essential. In fact, after this event, I learned the difference among "part", "side", and "edge".

Here is one more example: Control 11 (picture taken to the south). 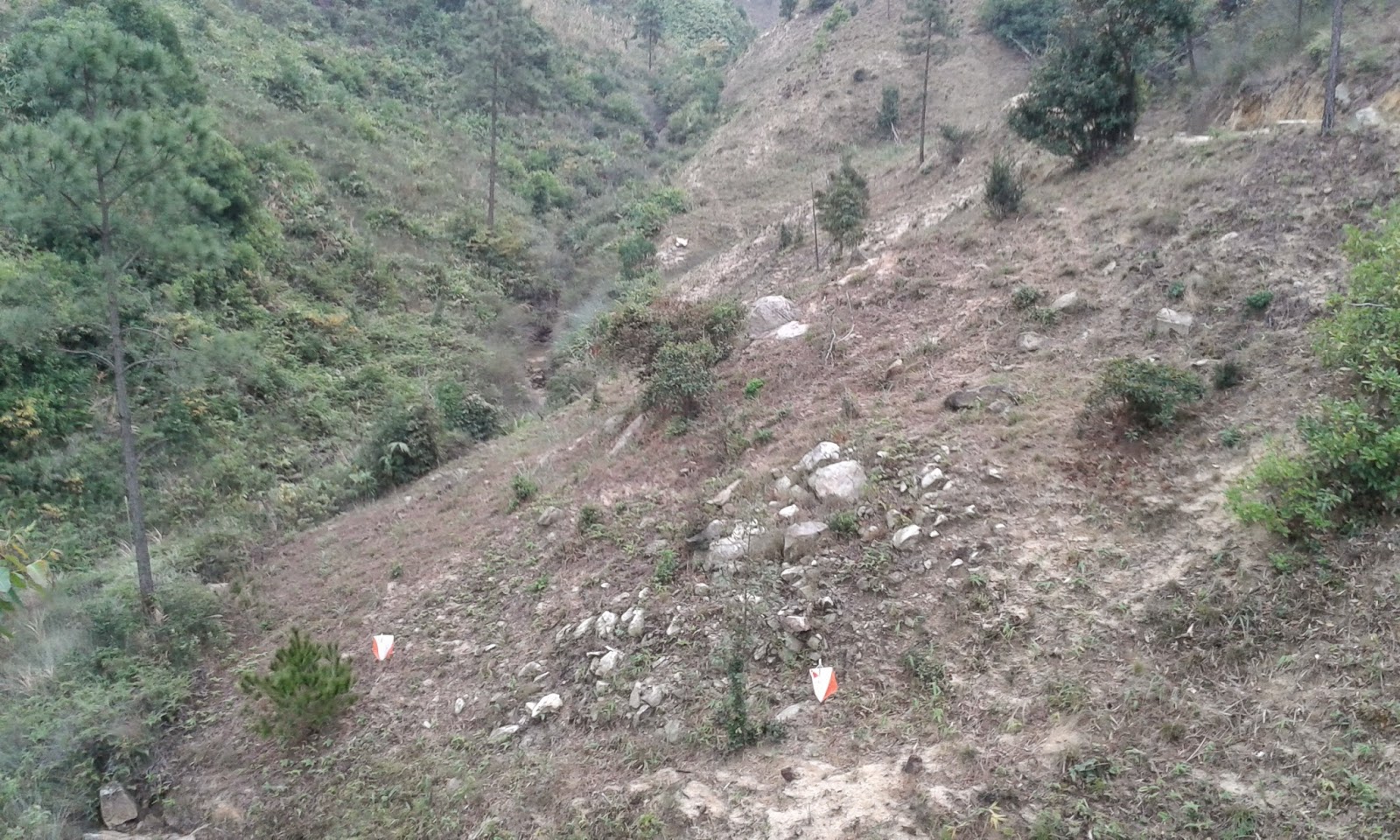 You may also treat the picture taken at the DP. Control description: west side of distinct tree.

What is the answer? Both flags had a shrub next to them.

However, do you notice a tall tree left of Flag A? It turns out that trees that are too small are usually not mapped, unless they are very distinct. The mapped tree referred to that tall tree. Therefore, the answer is none of the above (Z).

I only showed examples where answers can be determined at the DP. However, there were questions that required walking past the DP to find the answer. As long as the competitors walk along the trail and avoid out-of-bound areas, they are allowed to walk anywhere to determine the answer. Some flags were even put at a similar feature at a different location to test if the competitors can identify the parallel mistake.

I took the course very slowly. Sometimes I stayed at an area for 4 or 5 minutes to ensure I found enough evidences in supporting my answer. Still, I could finish the course in ~70 minutes. Having 100 minutes as time limit was really a lot.

Before the TC, there was a point where the competitors formed a queue. The first person in the queue was then guided to the TC, with an umbrella to block the view of the controls. 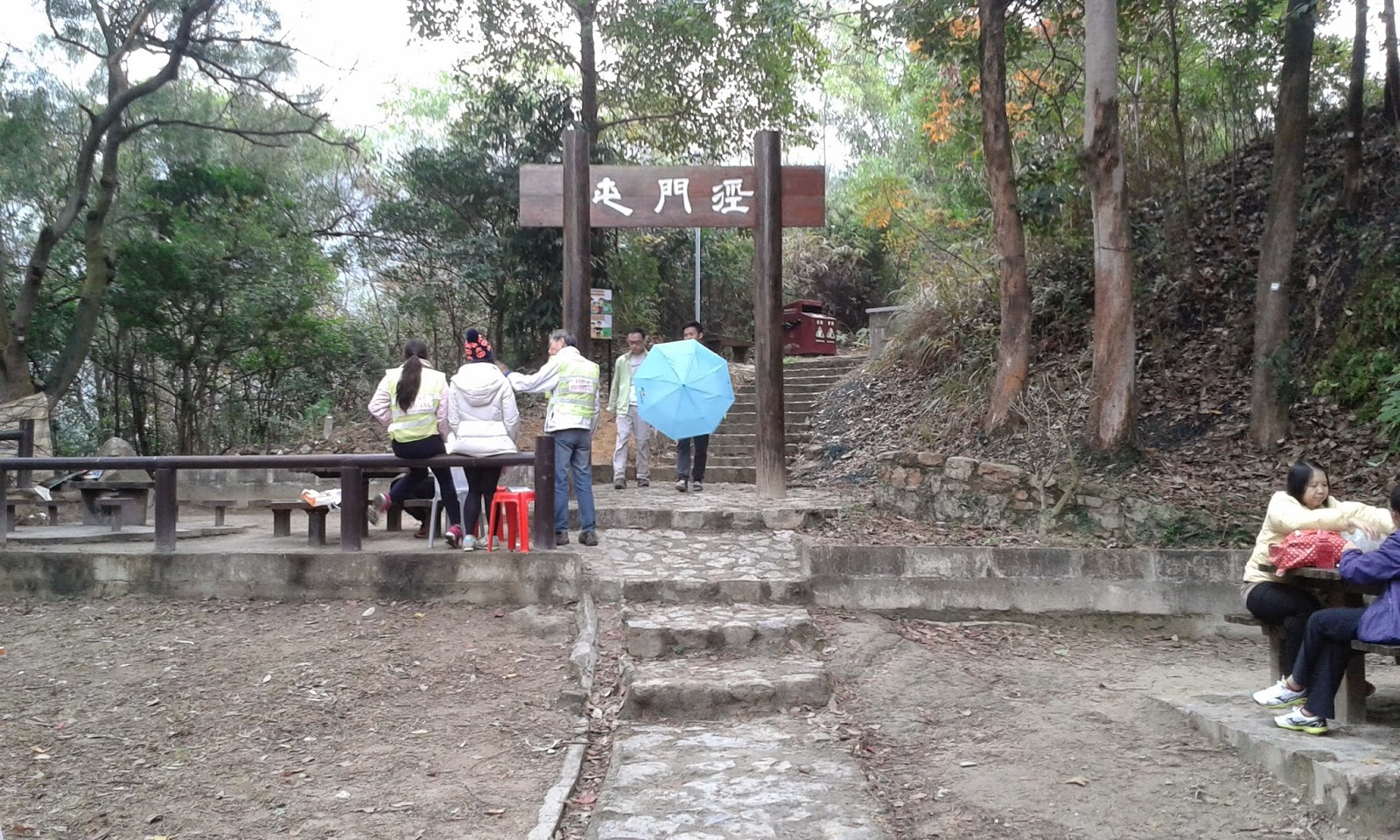 The competitor was then asked to sit down. The event official then explained the rule of TC, "The map has been set to correct orientation. You have 30 seconds to answer the question. Use your finger to point the answer. Oral answer is not accepted." At this moment, the controls could still not be seen. 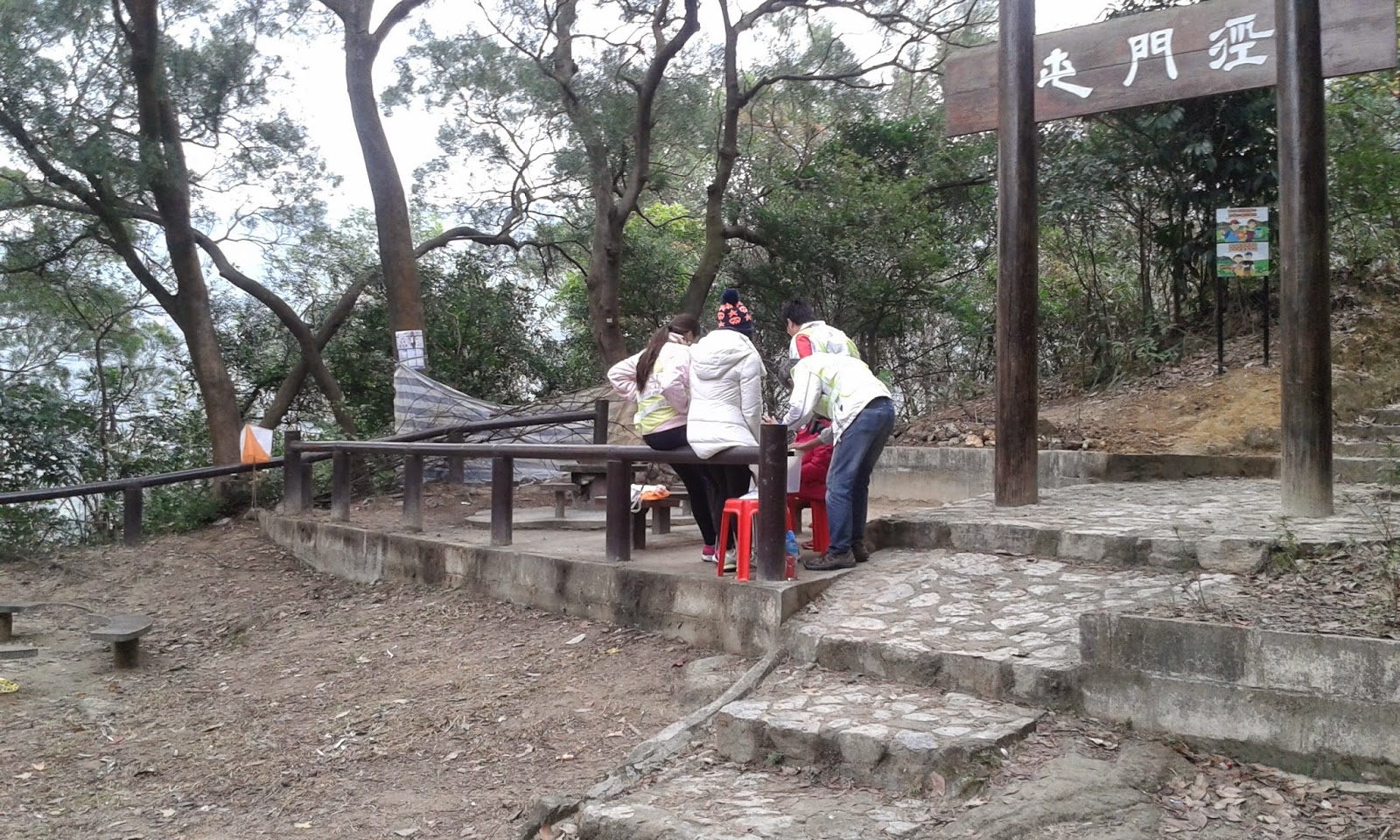 After understanding the rule, the controls could then be viewed. "From the left, this is A, B, C, and D (with finger pointing)". Officially, the official will say "alpha, bravo, charlie, and delta", but since these words may confuse kids, ABCD were used. Immediately after finger pointing, the official said, "your time starts now", and the map (with the control description) was uncovered. 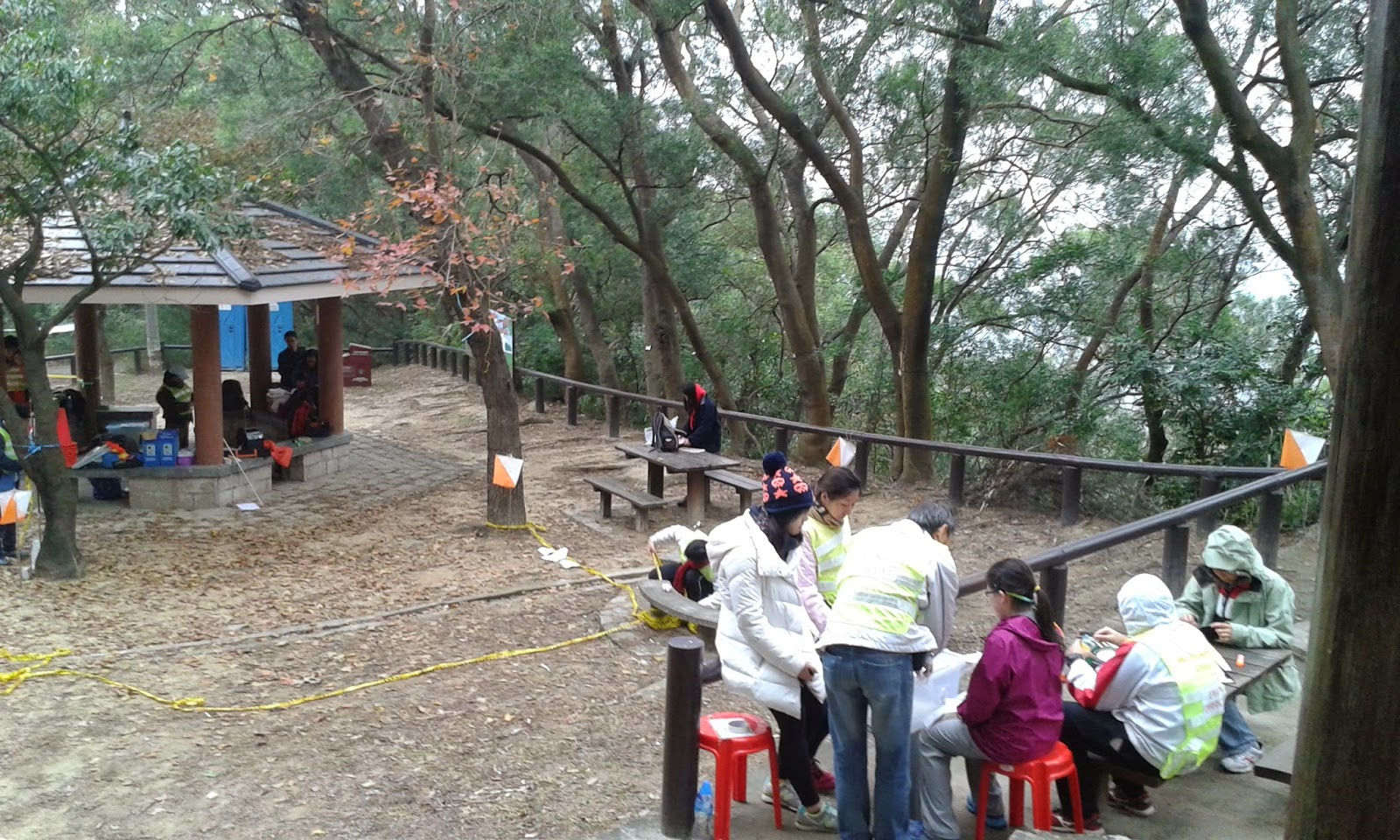 When I saw the map and look at the center of the circle, I immediately knew the answer, but I still felt that I should check to make sure. I did not have the question map, but the control description is: "South side of SW tree". The above picture was taken to the approximately north direction.

My thinking was: C, D could be immediately eliminated, since they are not on a distinct tree. The center of the circle pointed slightly to the left, indicating the left tree was what I should look for, so the answer should be A. I confidently pointed the answer.

The official said "Your answer is A." The two time keepers read out the stopwatches, both of which were ~ 5 seconds. I wondered if I could still do this faster.

Then, I was directed to submit my Pre-O answer sheet.

E. After the Course

After everybody was returned, there were people leading us to the course again to discuss the answers. Everybody got solution maps for the Pre-O and TC, so they could check the answers. They look like this: 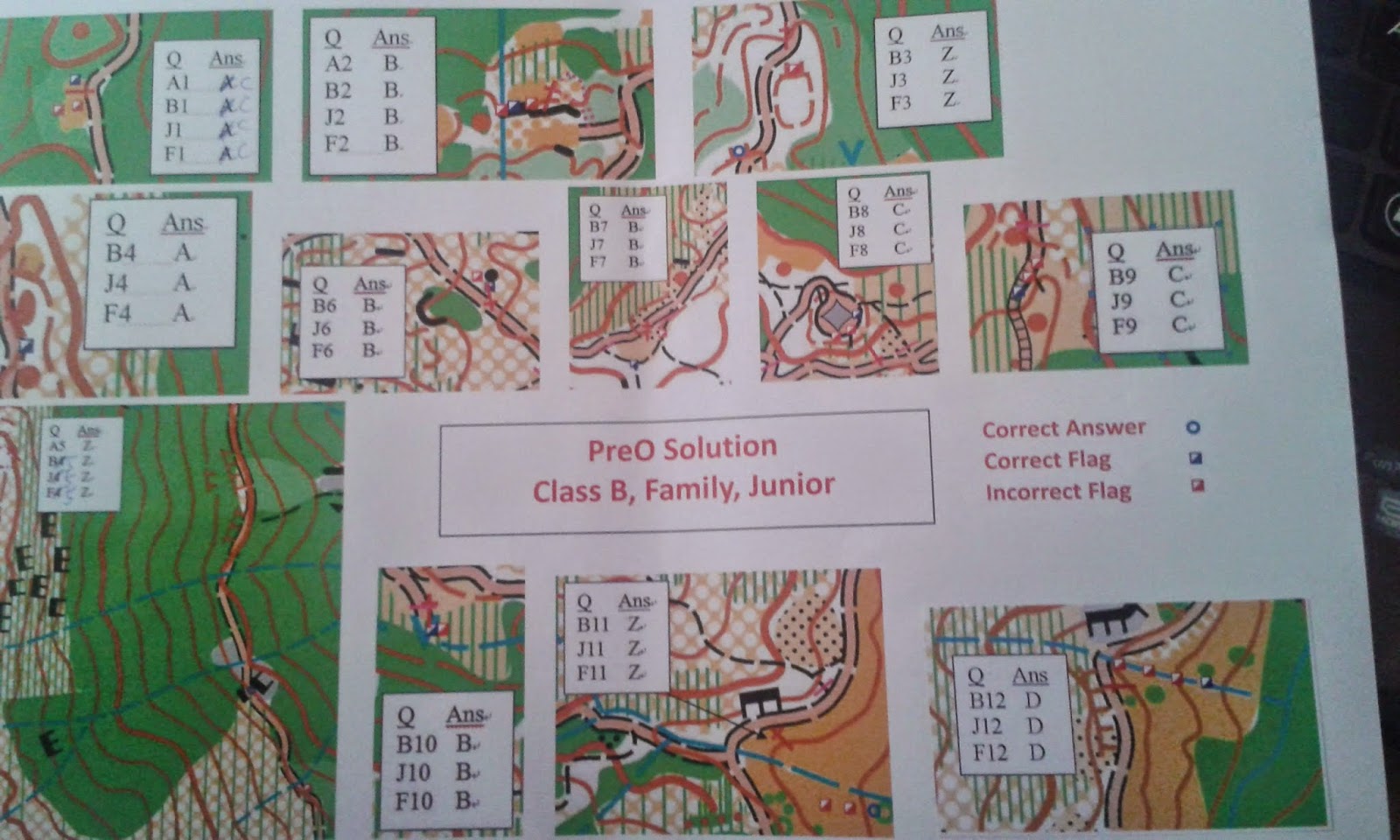 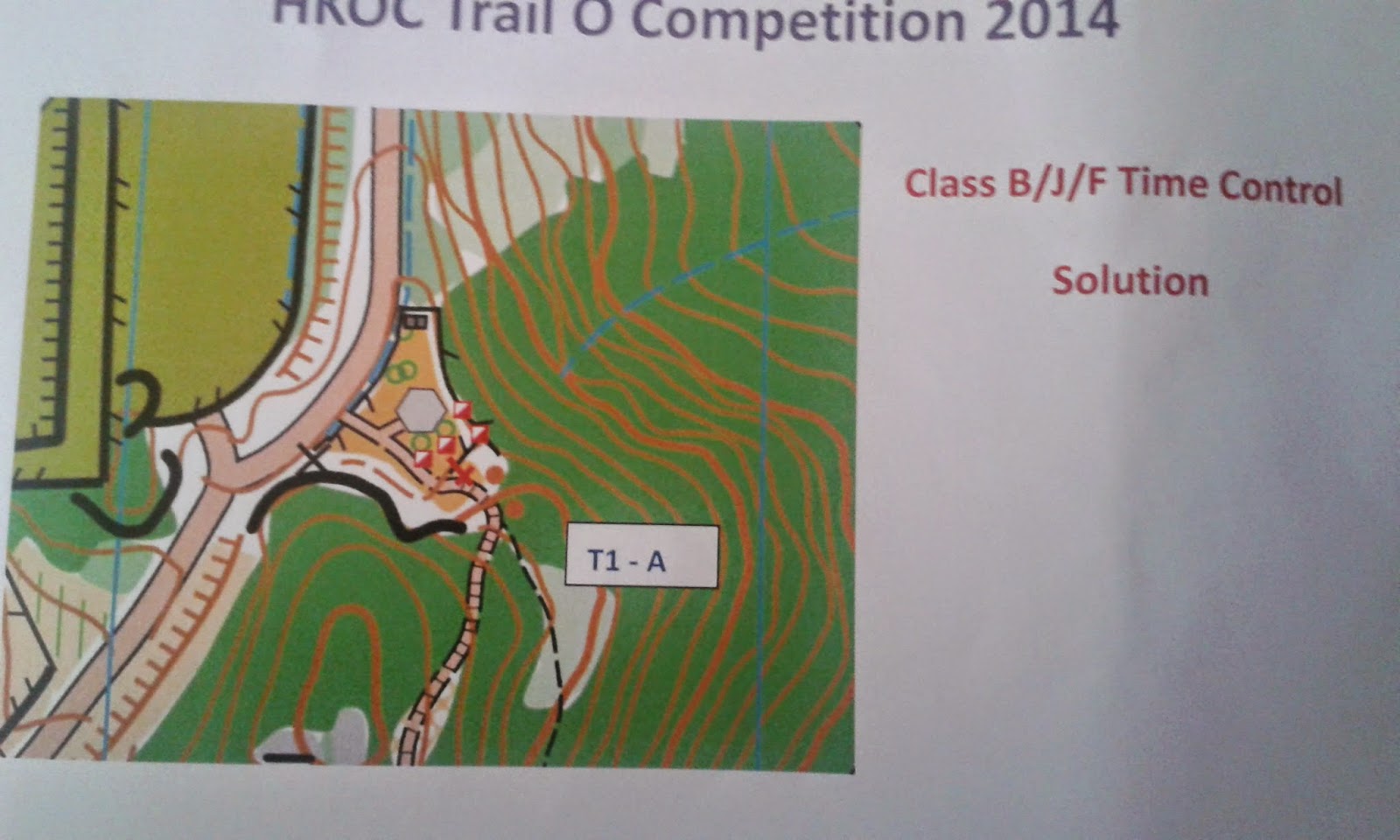 I took the above field pictures during the discussion session.

After returning to the event center, the results were up. I got the first place! I also found that using 5 seconds for the TC was very fast! 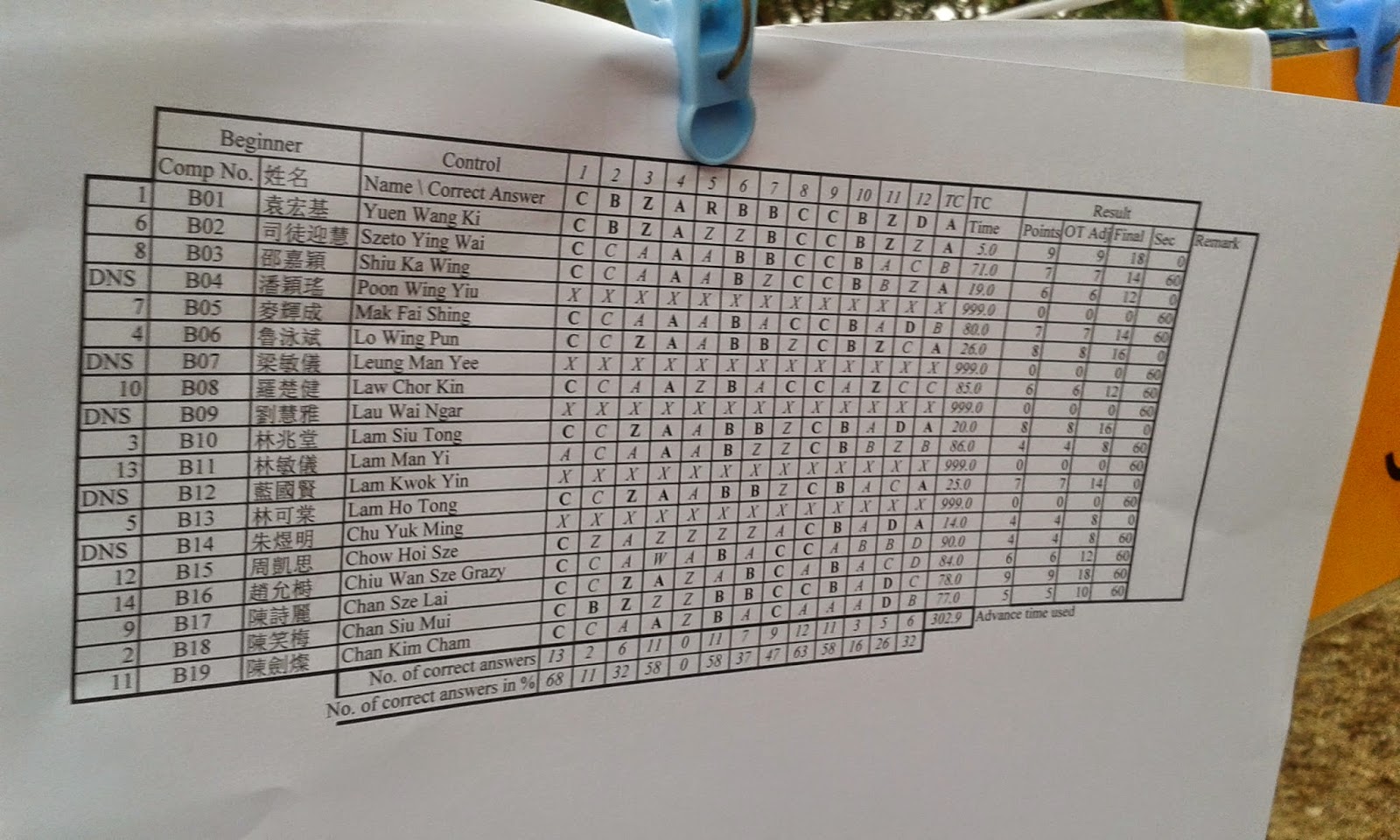 Therefore, I got a medal! Besides, all participants got a certificate for completing a trail-O. 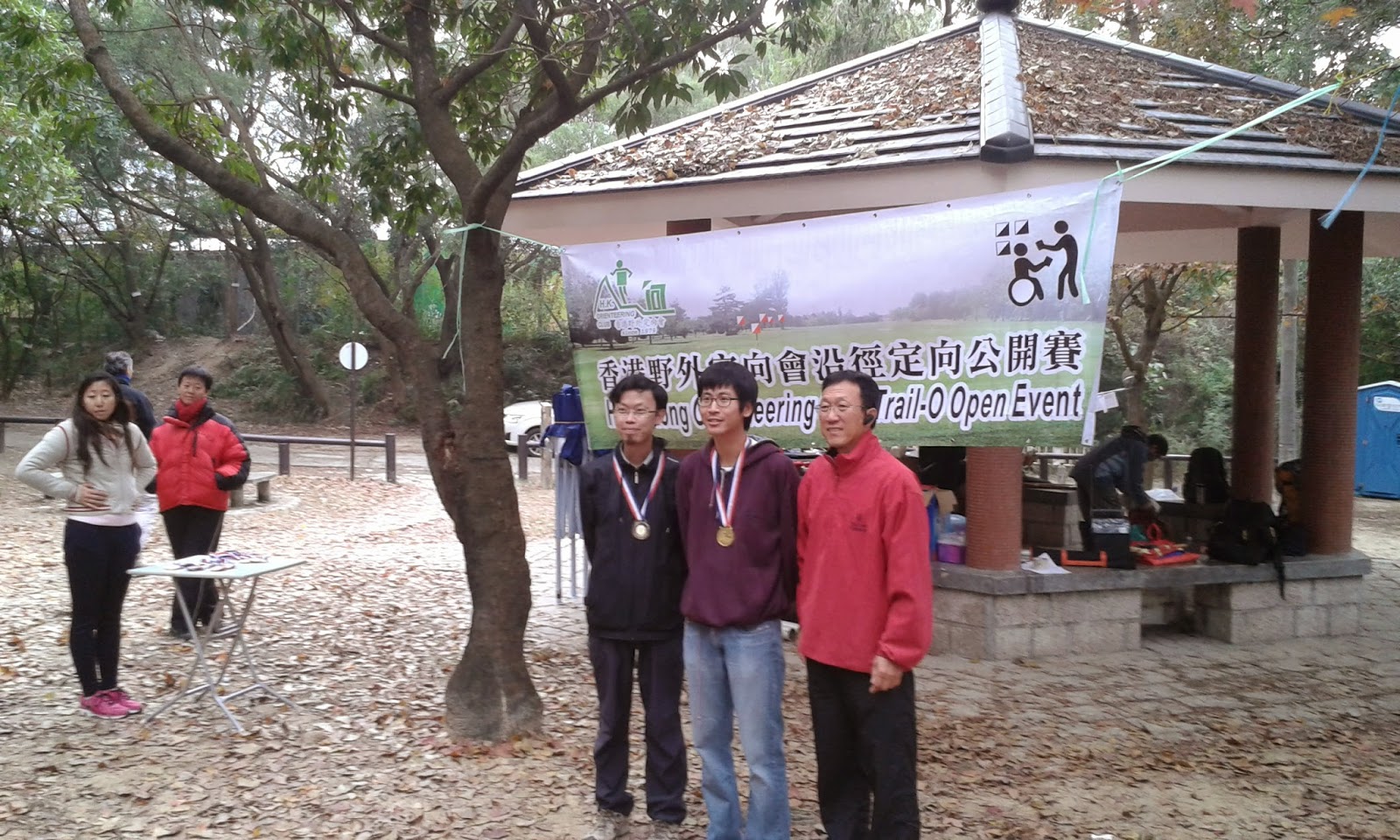 I think I really like trail-O. I know I do not run fast, so as a less active person, trail-O gave me opportunities to do short hike, while also getting difficult puzzles to solve. I wish I can do advanced course next time. Sadly, I will be out of Hong Kong soon, and the area that I live does not have trail-O at all. Should I try to organize trail-O there, even I have limited experience in trail-O?
Posted by johnayuen at 3:30 PM