A. To the Start

Tai Mo Shan (大帽山) is the tallest mountain in Hong Kong, with elevation of 957 m/ 3140 ft. Literally, it means "Big Hat Mountain", but since the pronunciation of 帽 (hat) is similar to 霧 (fog), the mountain is also nicknamed as "Foggy Mountain". In fact, this mountain is frequently foggy at the top.

To get to the event center for the Annual Orienteering Championship - Long Distance, I first needed to take MTR (Hong Kong subway) to Tsuen Wan, take the bus route 51 to Tsuen Kam Pass, and hike uphill for another 1 - 2 km. When getting off the bus at Tsuen Kam Pass (elev. 480 m), it was as foggy as this: 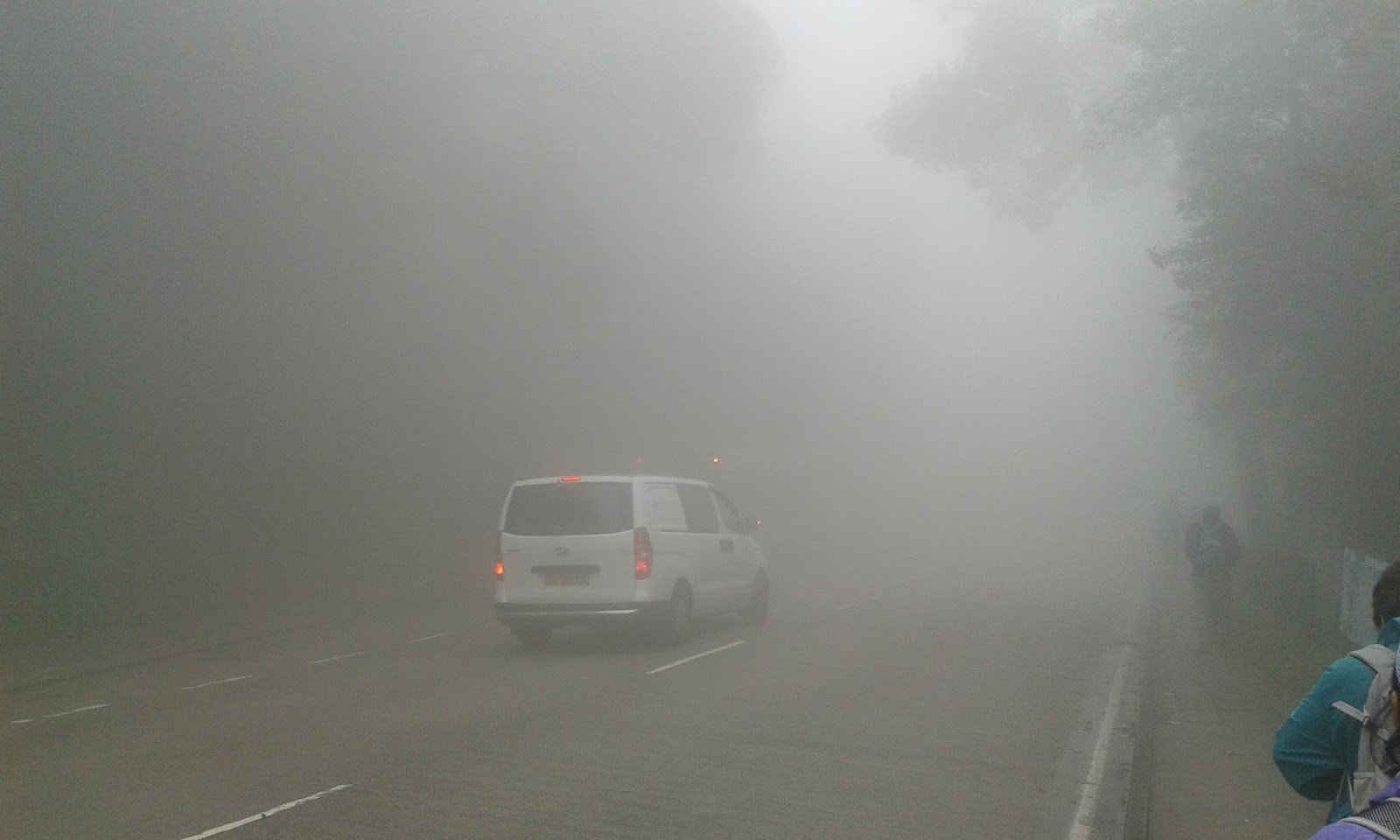 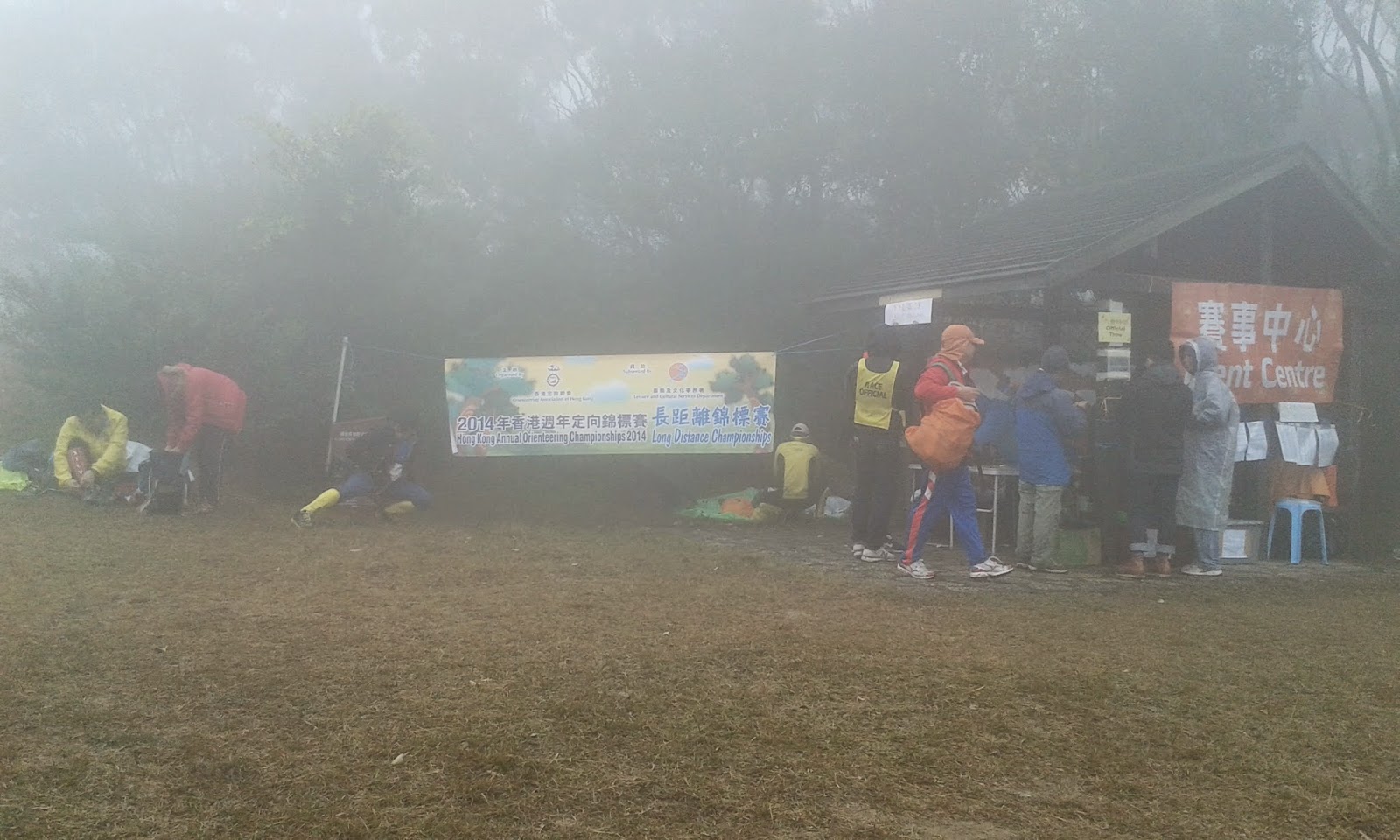 I was thinking of changing clothes and leaving all the stuff there. However, I did not recognize anybody there, so I decided to carry my stuff to the starting point. I knew that someone that I know stationed at the start. Leaving the stuff with people that I know may be safer. Therefore, I continued to go up. Below is a sign to warn vehicles for orienteering competitors: 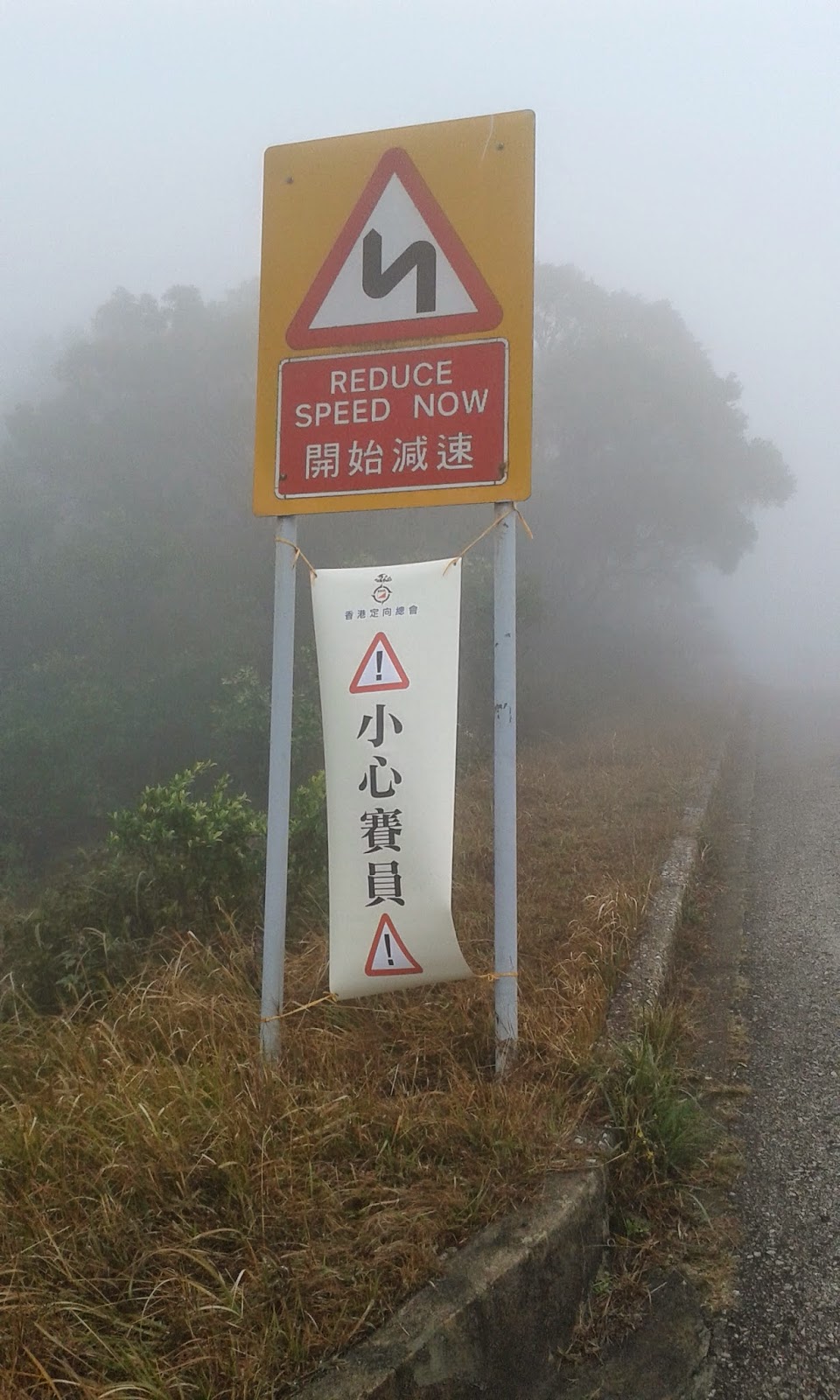 I also walked past the finish: 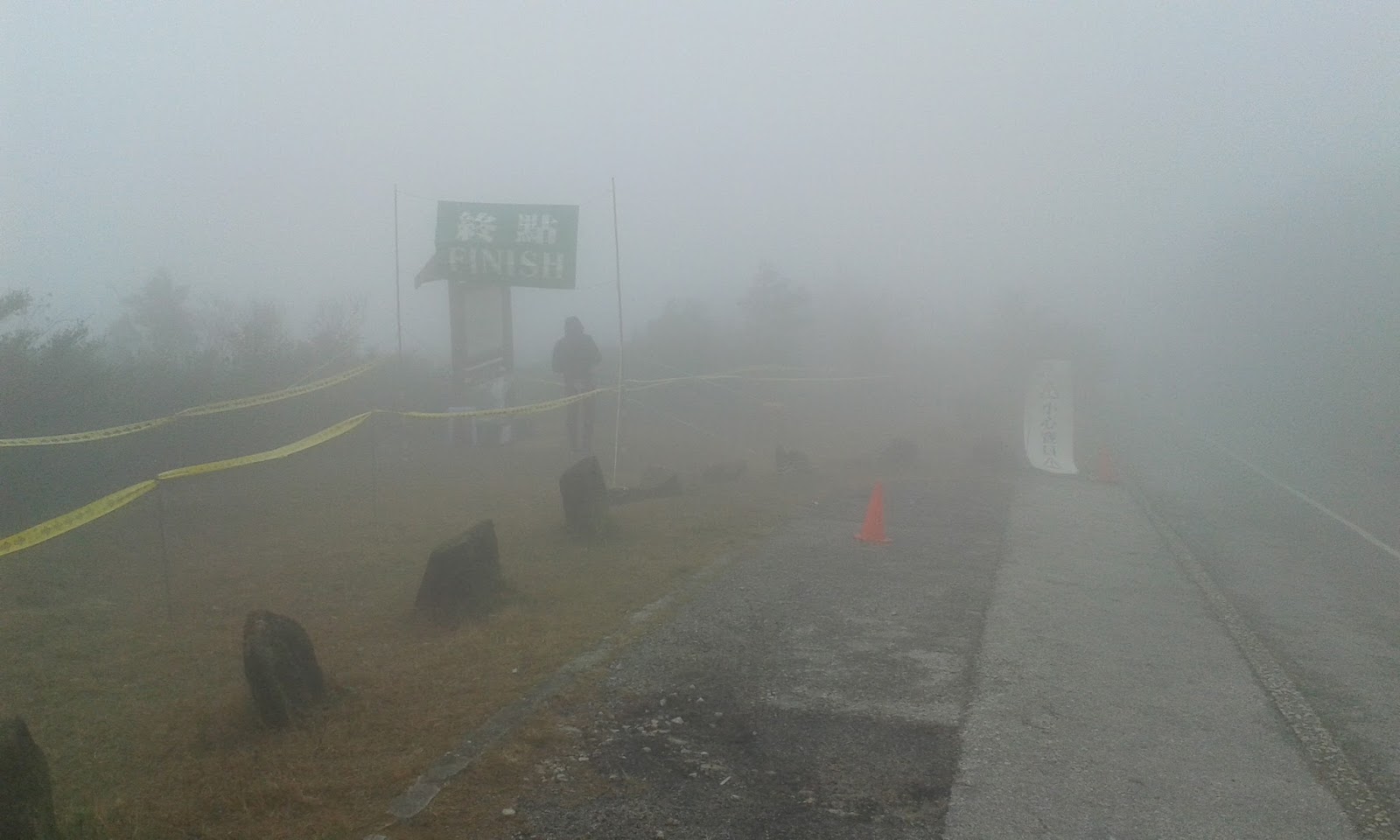 B. On the Course 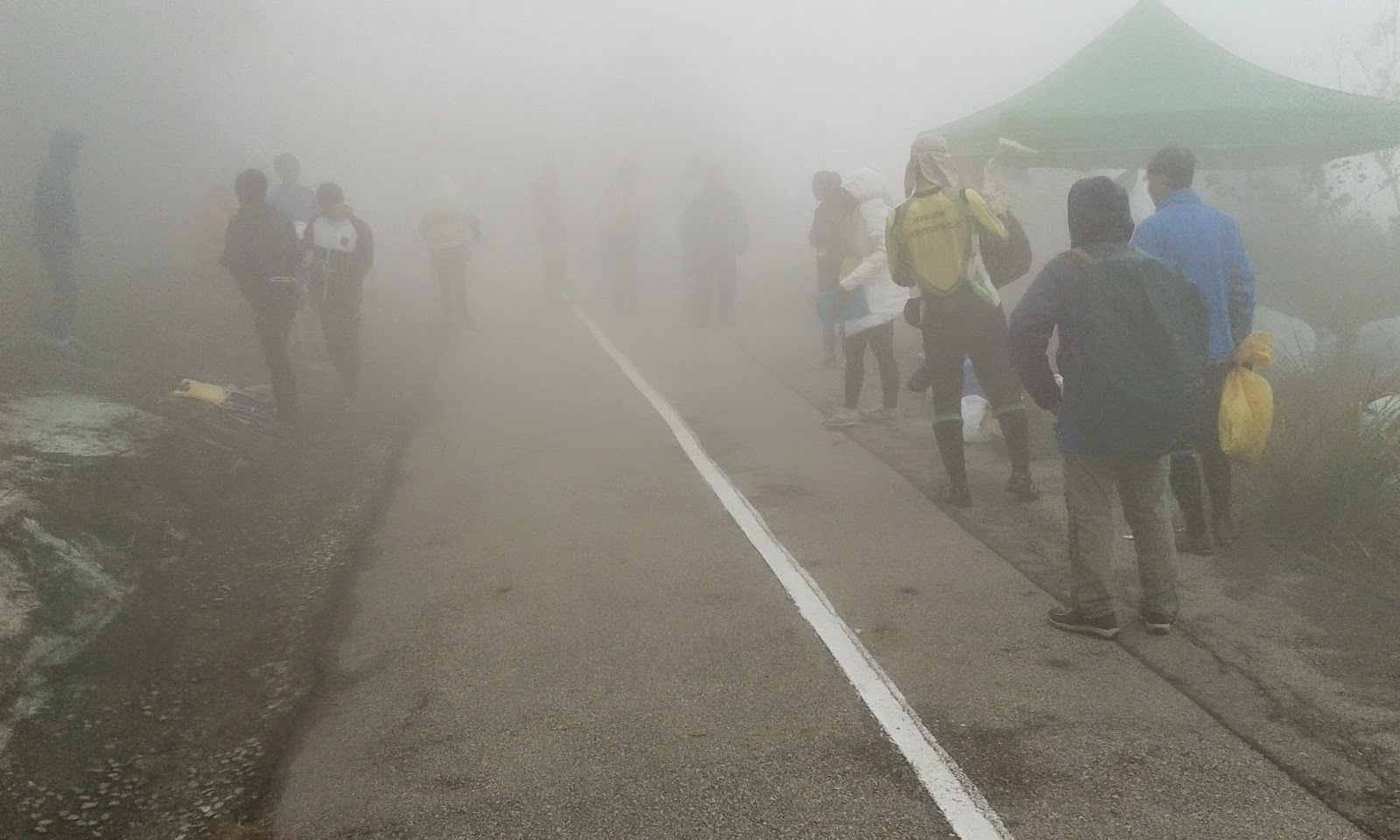 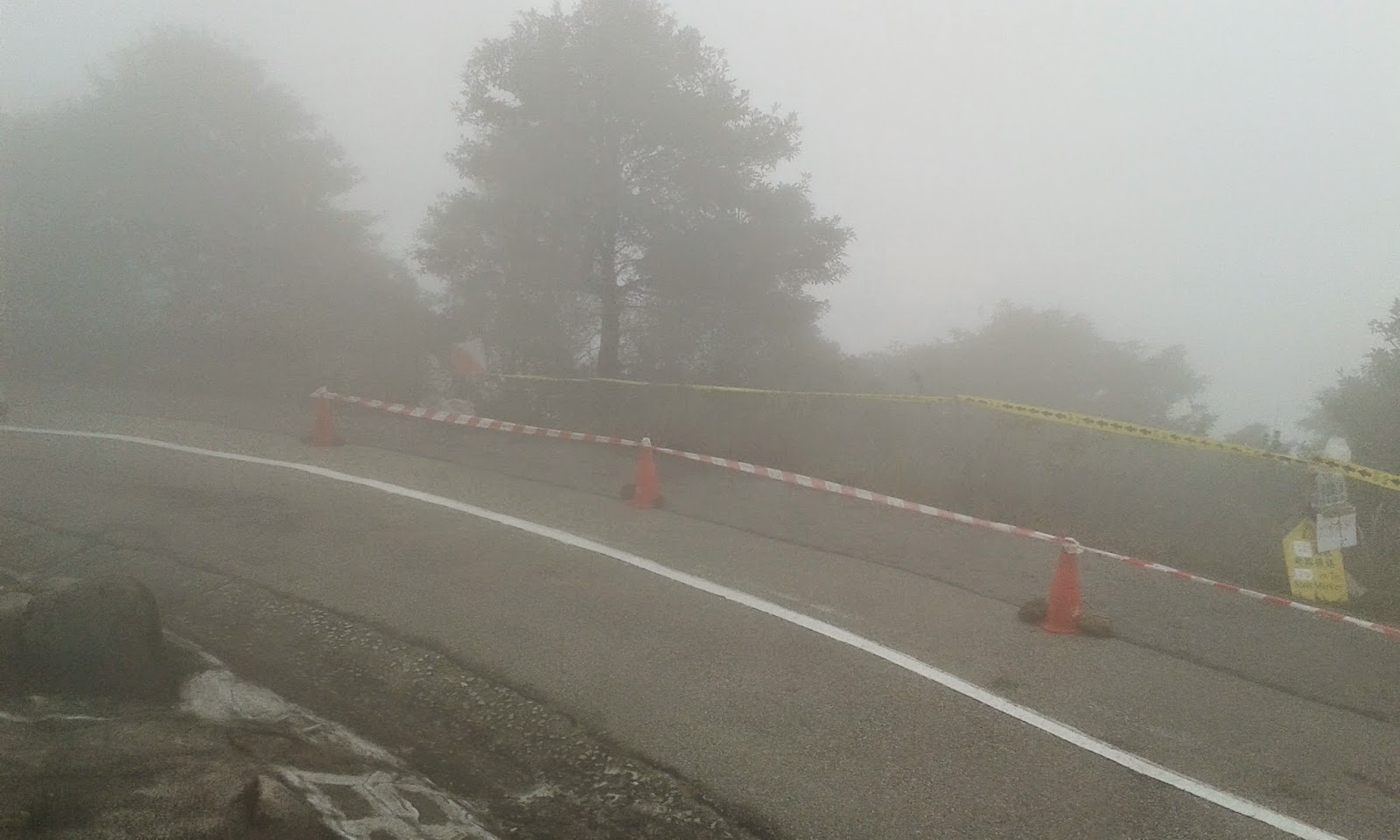 At 12:30 pm, all MO (Men Open) group participants could start. I was given this map: 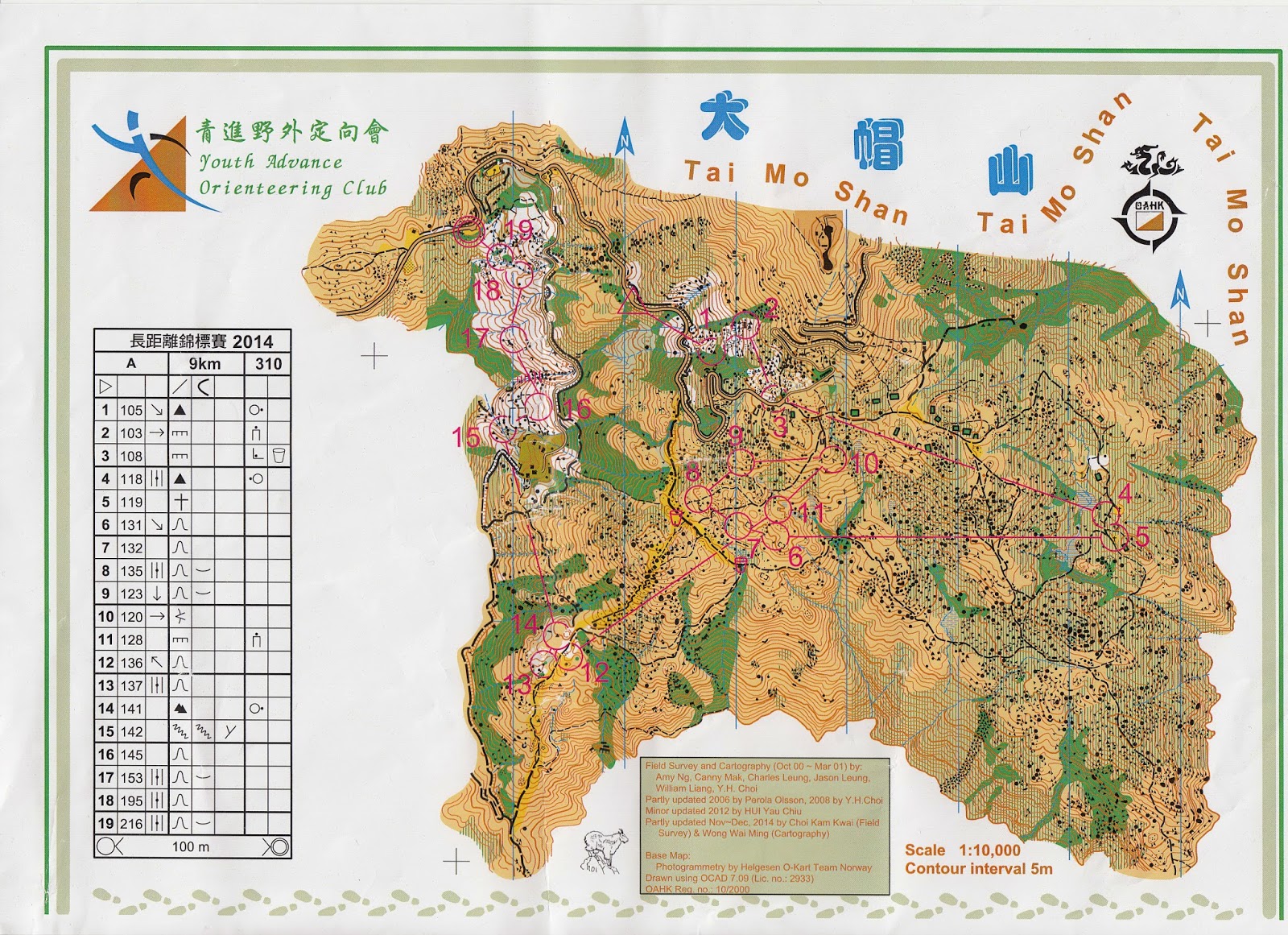 There are a lot of open areas in the map, but it did not matter. Seeing far was not possible due to the fog.

I had the GPS record. Hopefully I can overlay the GPS data on the map after I get the map scanned. Here, I will show some pictures that were taken during the course. Since MO group did not have prizes, I could take the course slowly and take pictures. Still, I realized that I made some not-so-minor mistakes during the course.

This picture was taken on the way to Control #4. It was a long trail run, but there were several path junctions to decide. I was quite concerned in this area, since I could not see the surrounding small hills to identify my location. In the end, I did go to the wrong path. I wished I could use the NE path. In the end, I used the SE path. 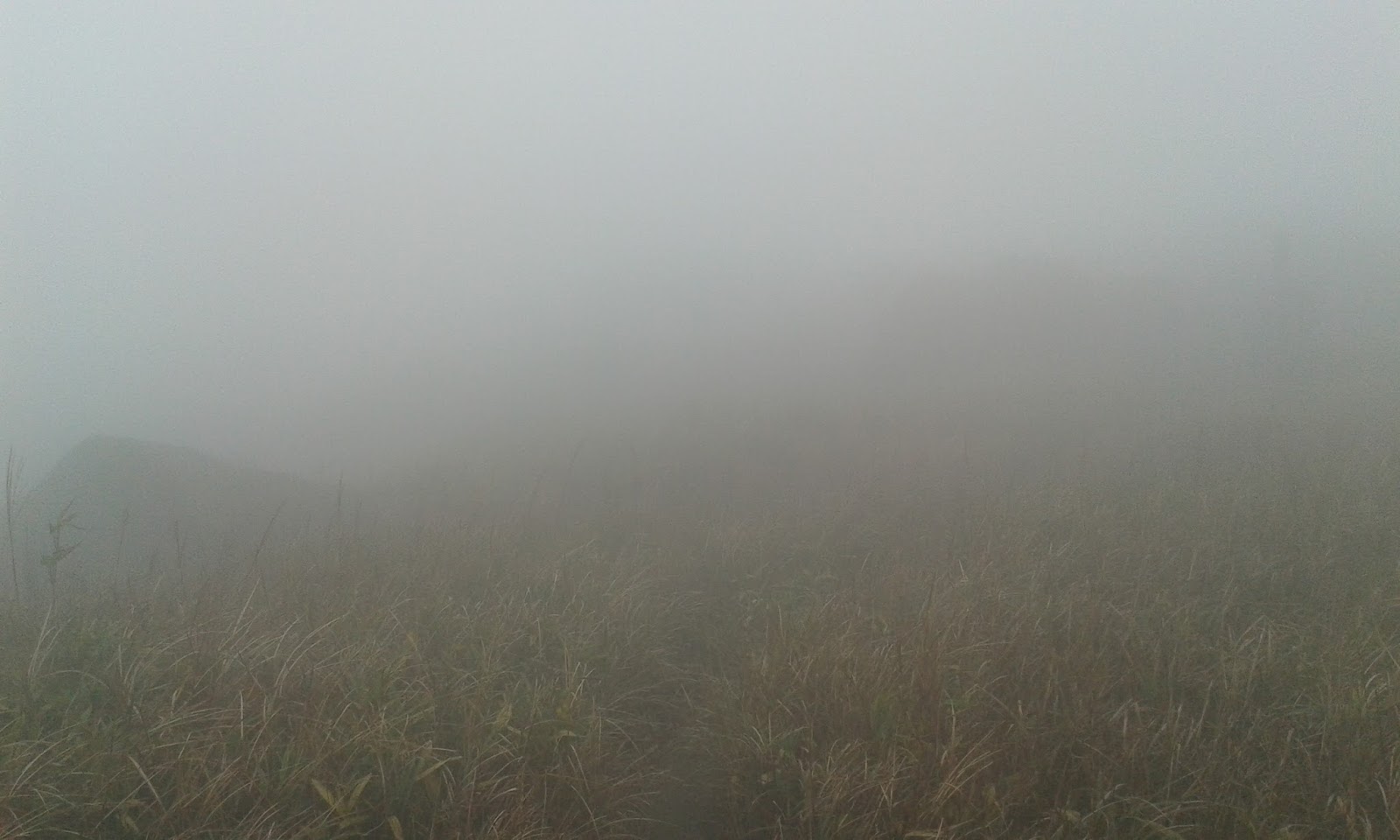 Fogs started to clear when I was on the way to Control 6. 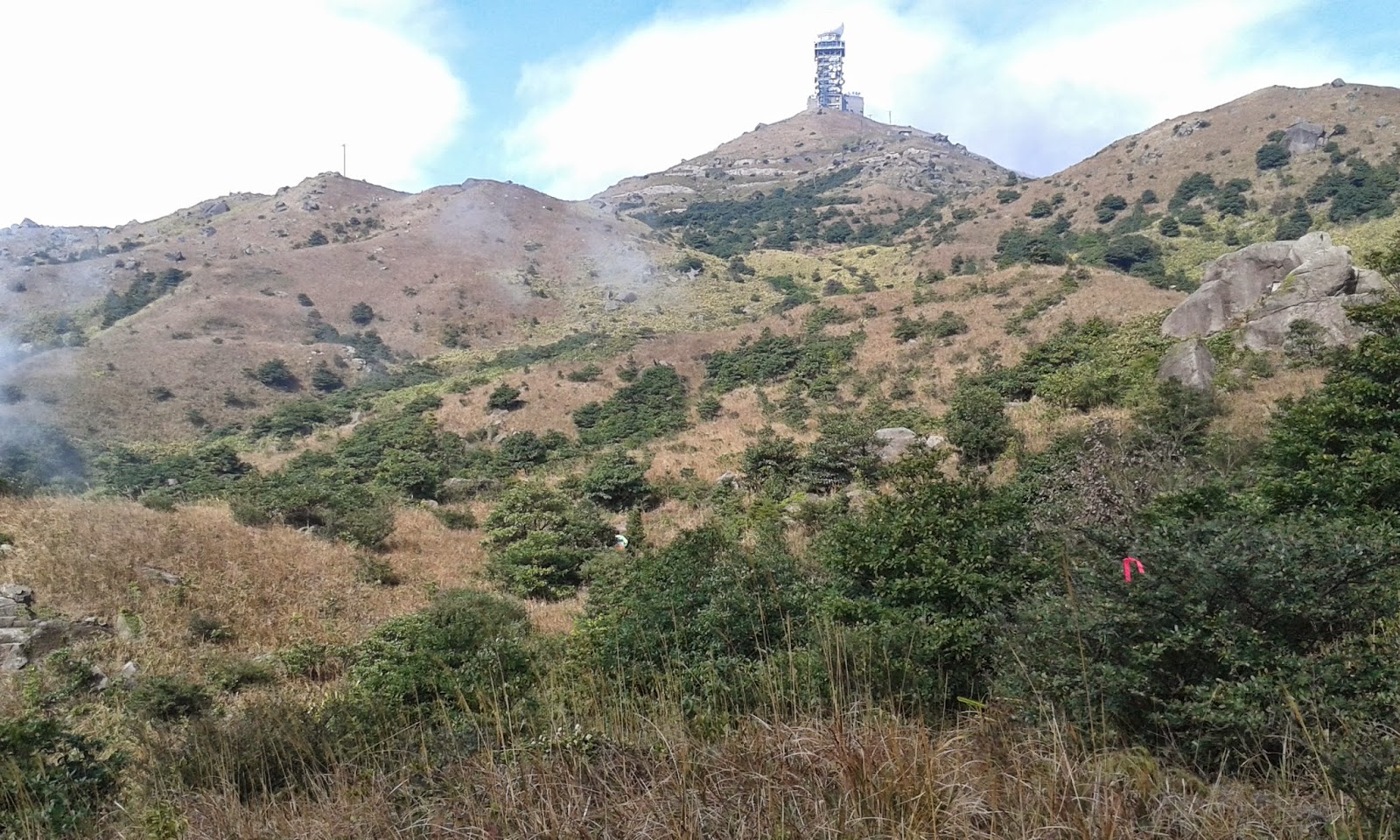 This is a picture of Control 11, looking from NE. 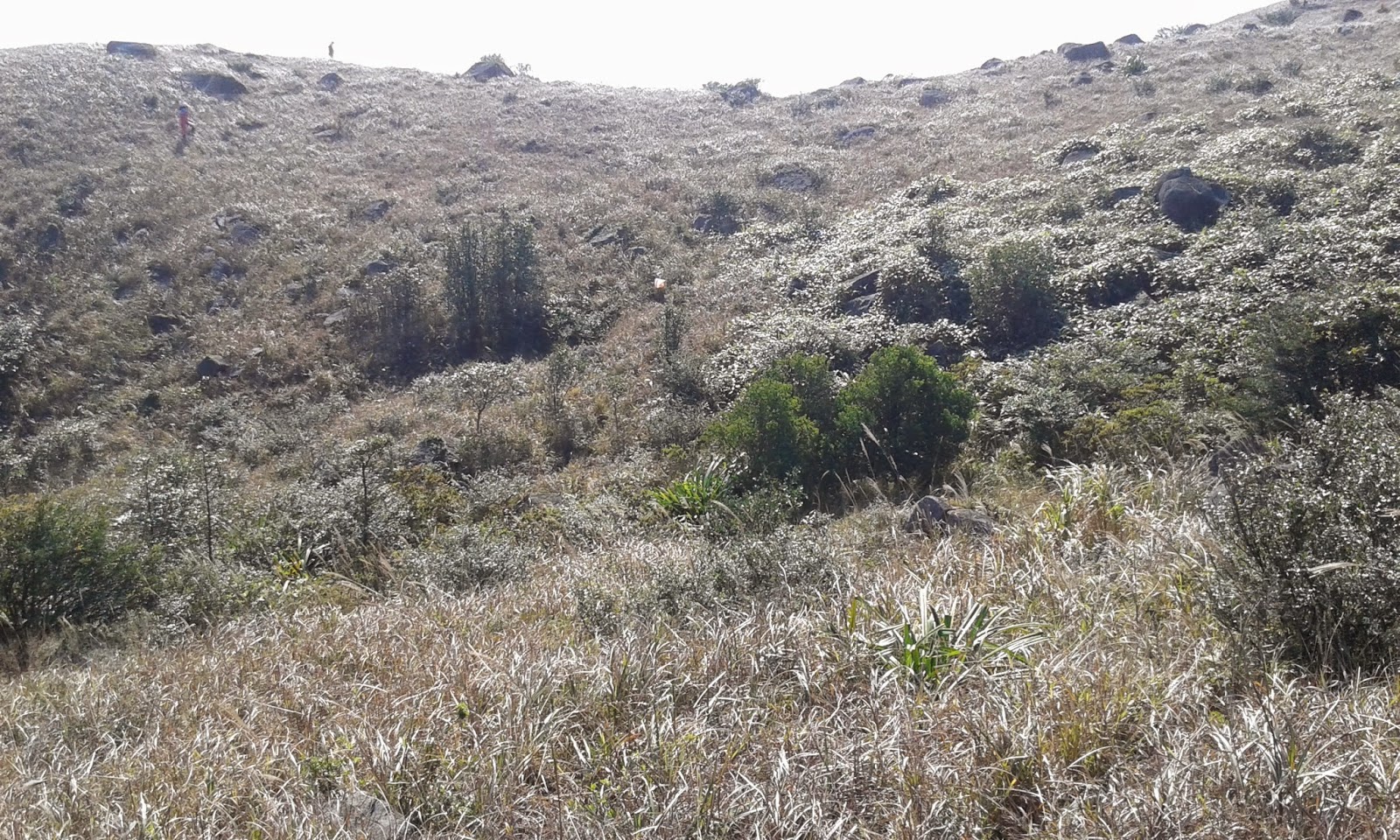 This picture shows the cliff near Control 17. The last five controls guided the competitors to navigate through the white woods, which are quite rare in Hong Kong. 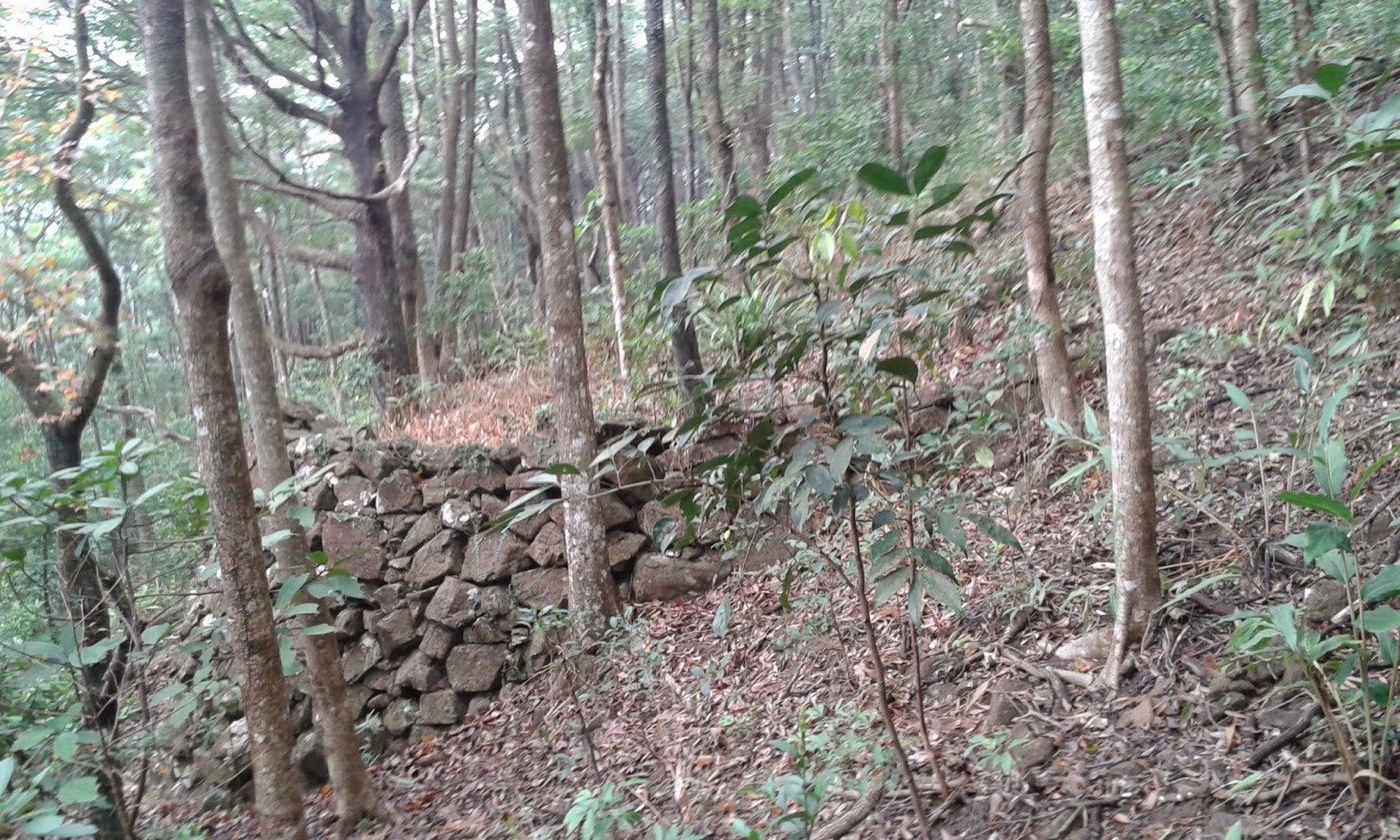 After finishing the course and checking the results, the fastest person finished the course in ~1 hr 15 min, but I took 2 hr 7 min. That was too slow. Seeing that I only ran 7.4 km in this course, I think I should be able to finish the course within 2 hours.

Even with the mistakes, I was happy that I could finish an orienteering course at the top of the tallest mountain in Hong Kong. 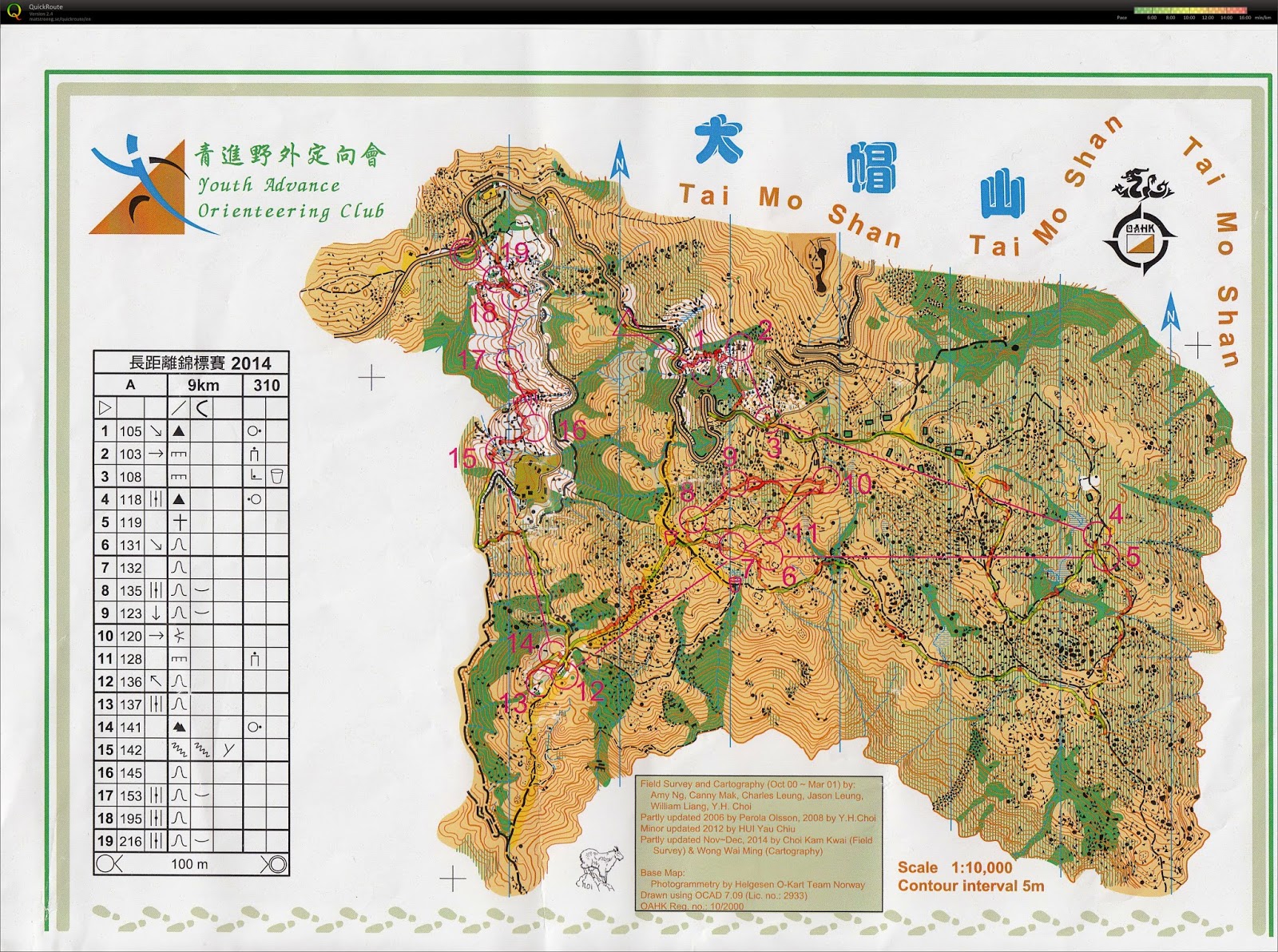 Control 2: I did not climb enough to get to the control. However, I also felt that the vegetation within this area was not that accurate. I used the north thicket and went east to navigate, but I saw an unexpected open land, and the cliff with control seemed to be further south.

Control 3: I went too far west on the road. The bends of the road helped me to get re-oriented.

Control 4: I was not aware of an important trail junction, which caused me to use plan B.

Control 6: Same problem as Control 4. I used the east trail to leave Control 5. At the junction, I should go west, but I went south because I did not see the junction.

Control 10: I misjudged my distance. I incorrectly searched for the control not even passing through the undergrowth area.

Control 13: I did not see this control on the map and went to Control 14 first.

Control 18: I should not walk along the contour and climb uphill instead. Perhaps I was too tired to walk uphill?