To get a glance on orienteering in China, I got an opportunity to do two-day orienteering competitions in Shenzhen, China, which is right next to Hong Kong. Not being in Shenzhen for a while, it is also a chance to see how Shenzhen changed. 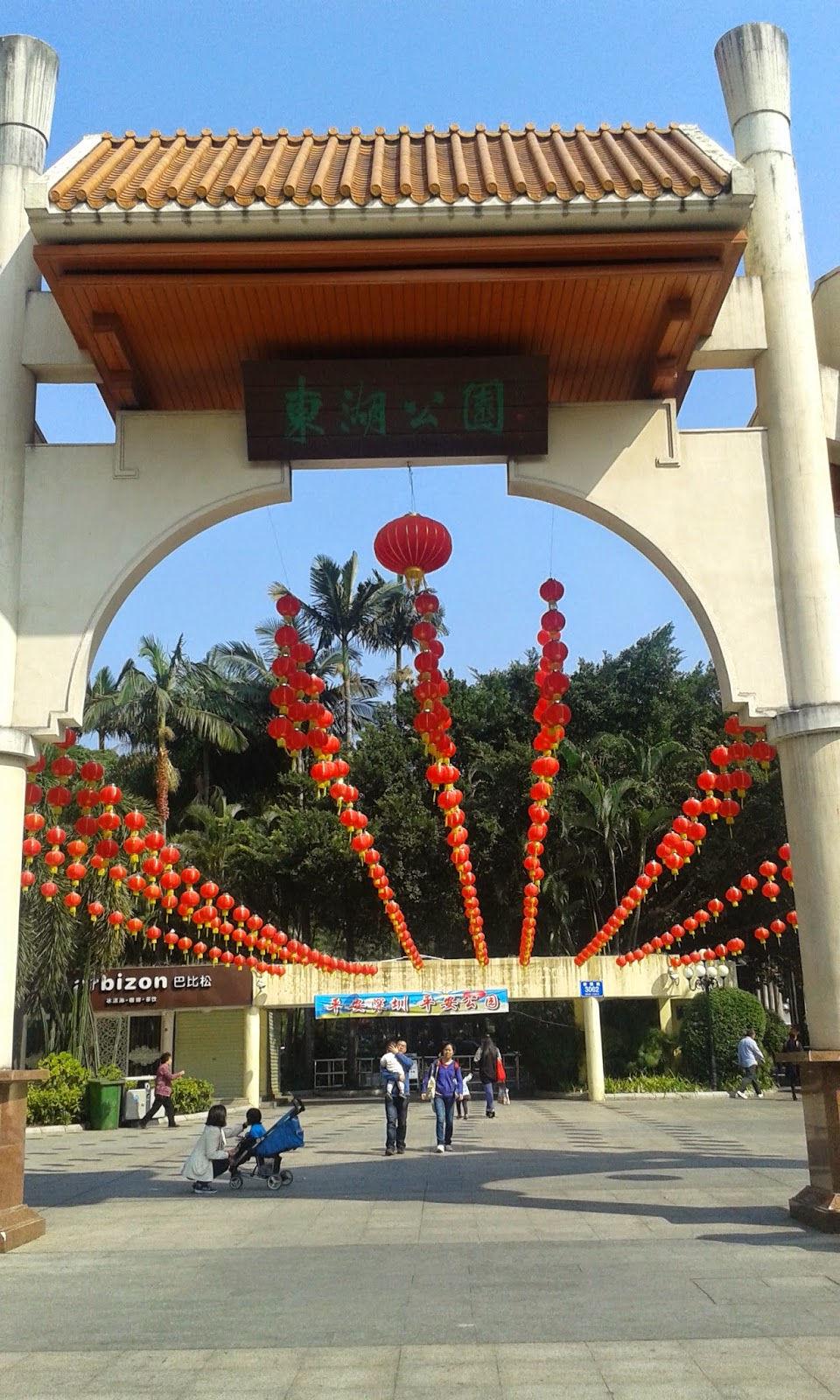 After crossing the Hong Kong border through Lo Wu, I got ~45-min ride to East Lake Park by bus. When looking around on the way to the park, it seems to me that Shenzhen is already very developed. I got a chance to walk around the streets. They looked generally safe and clean. 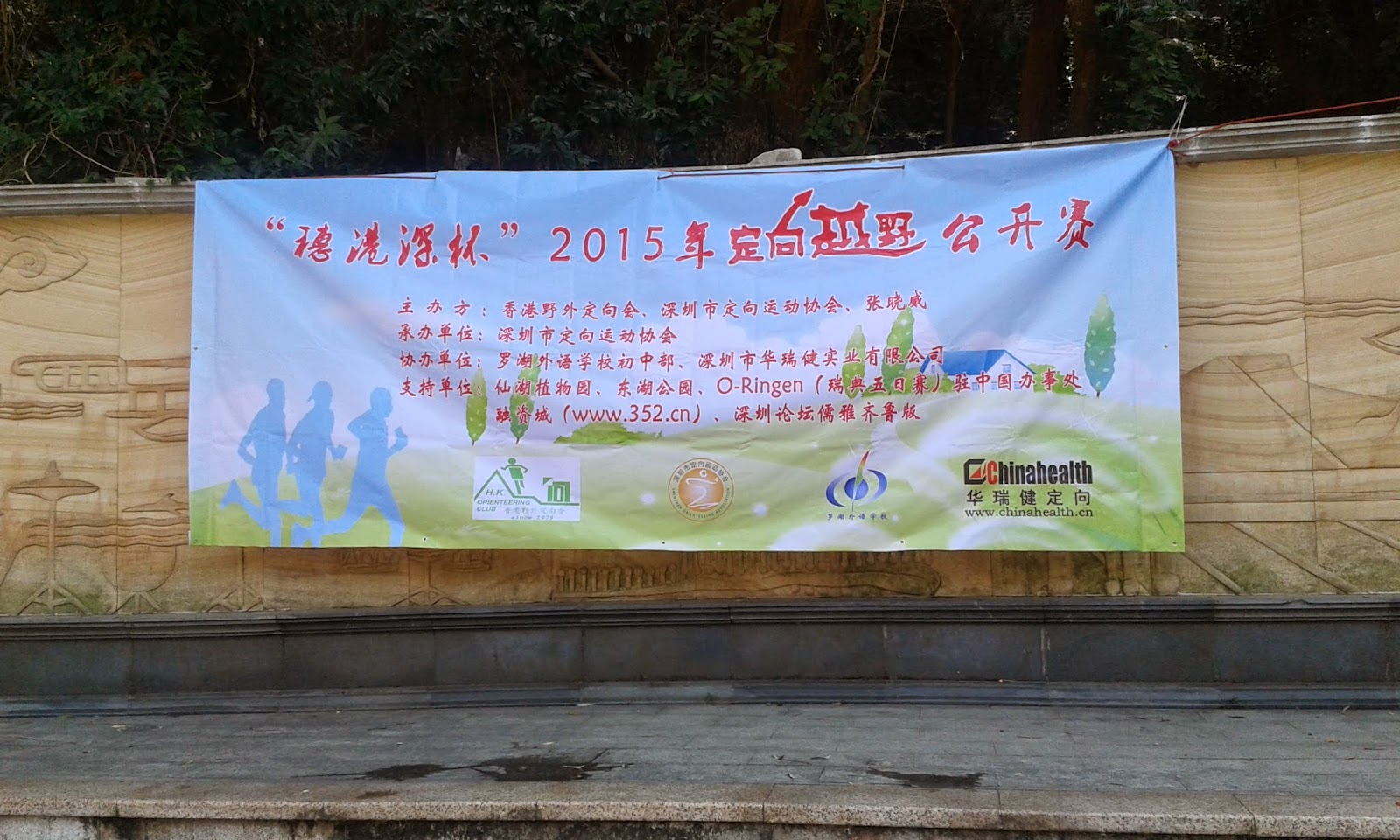 The start was at a plaza near the entrance of the park. The competition was named as “Guangzhou - Hong Kong – Shenzhen Cup” The competition acted as an exchange of orienteering between Hong Kong and Guangdong Province of China.

The following picture shows the start area. Like many competitions, the start uses 3-min boxes: competitors check in at 3 minutes before start. They advance one box for each minute, until they take the map and start. In China, they do not use start time, but use batch group. The batch group tells you relatively when to start. Instead of saying the official time, the officials will say “batch group #X goes into the first box”. 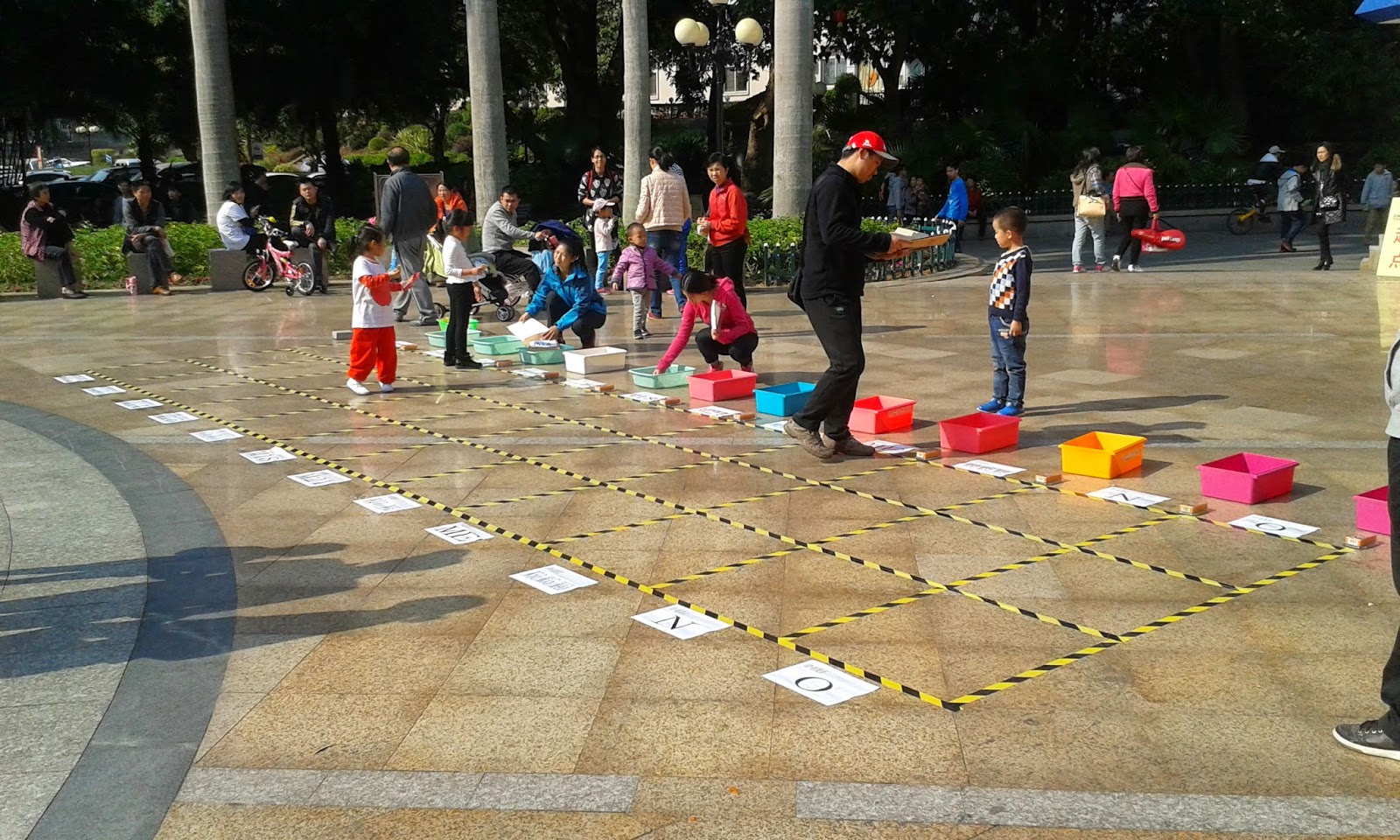 The sprint course for ME group looks like this: 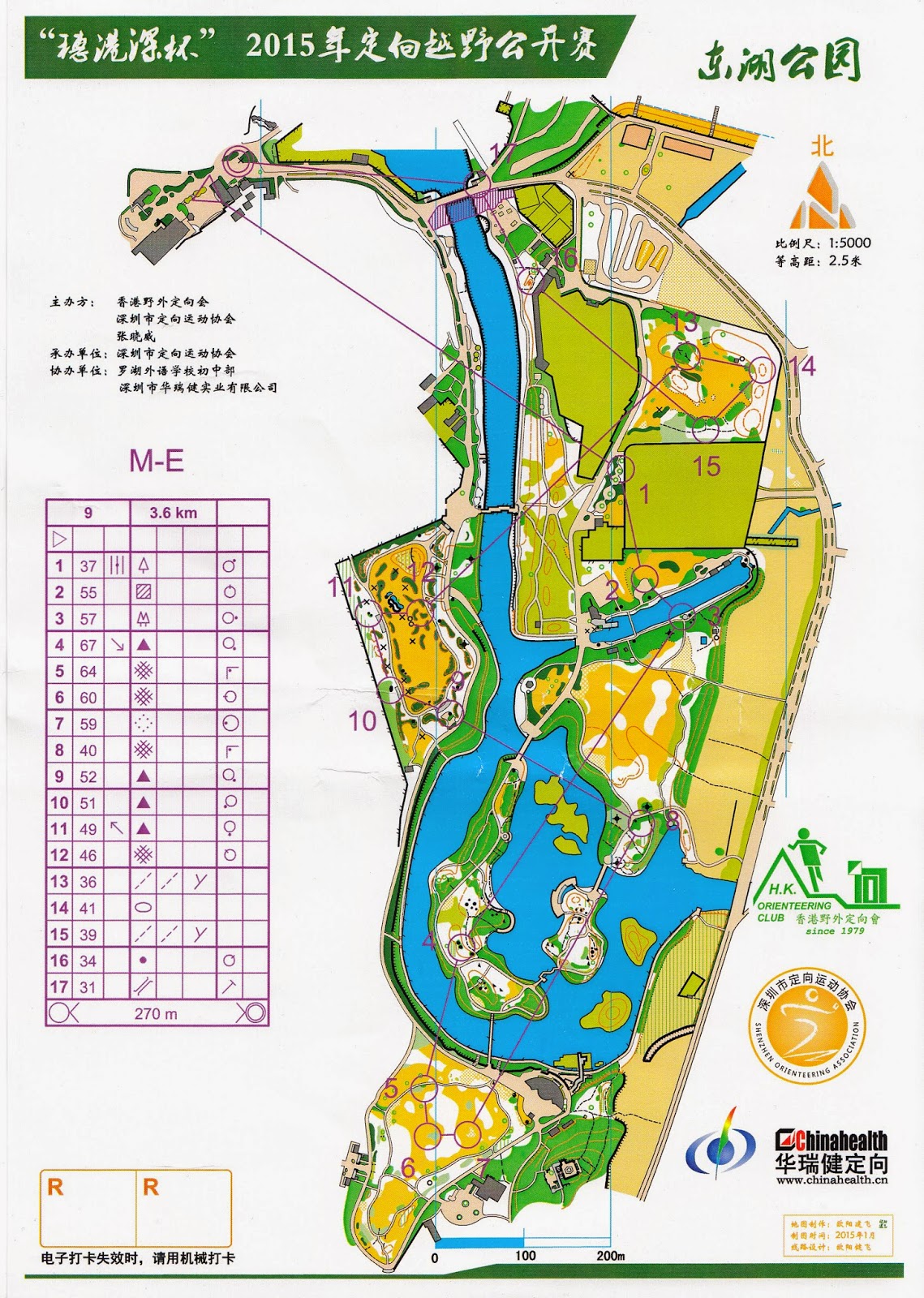 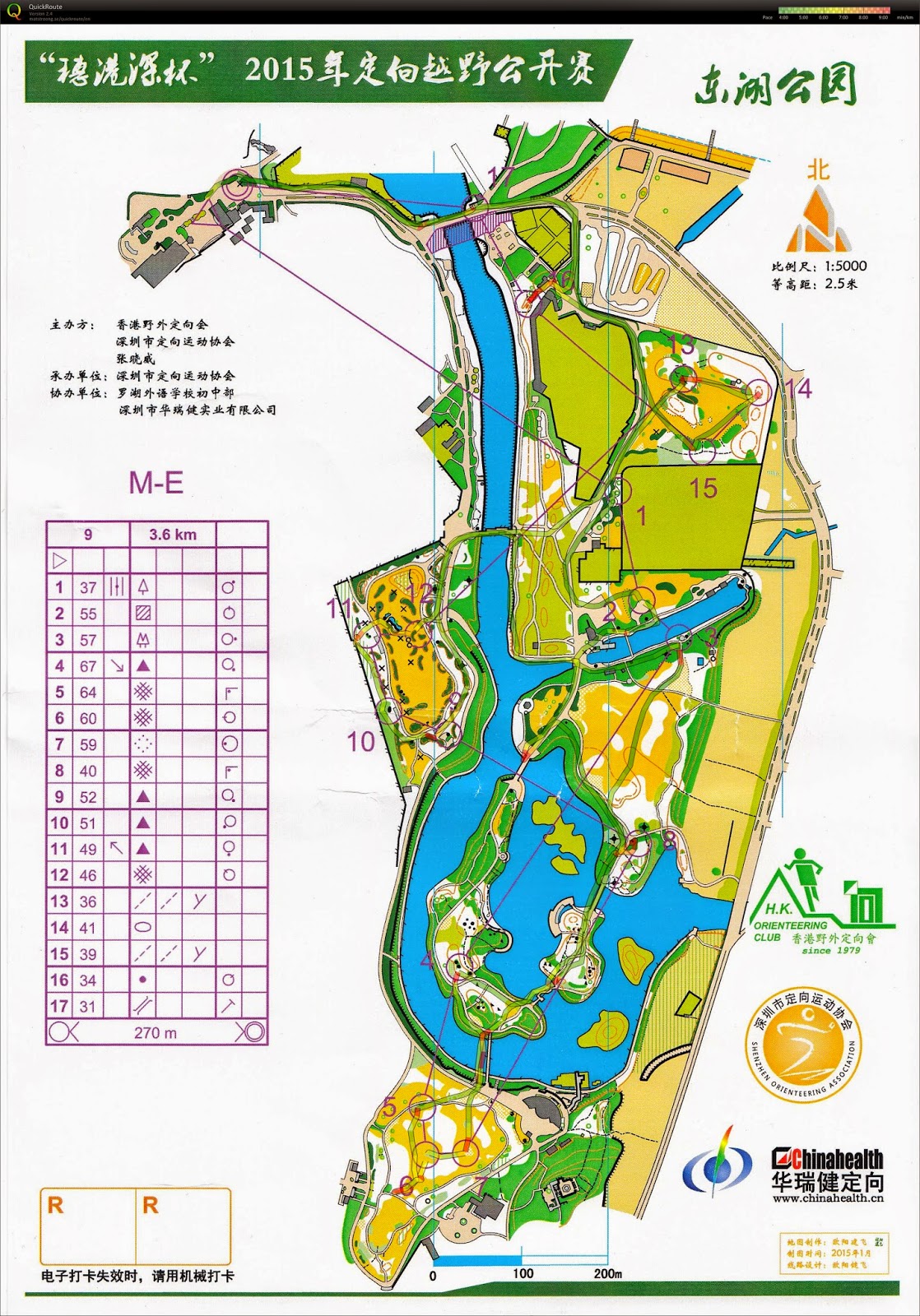 At the beginning, we passed through the finish, which was next to a Confucius statue. (Note: pictures were taken after the course) 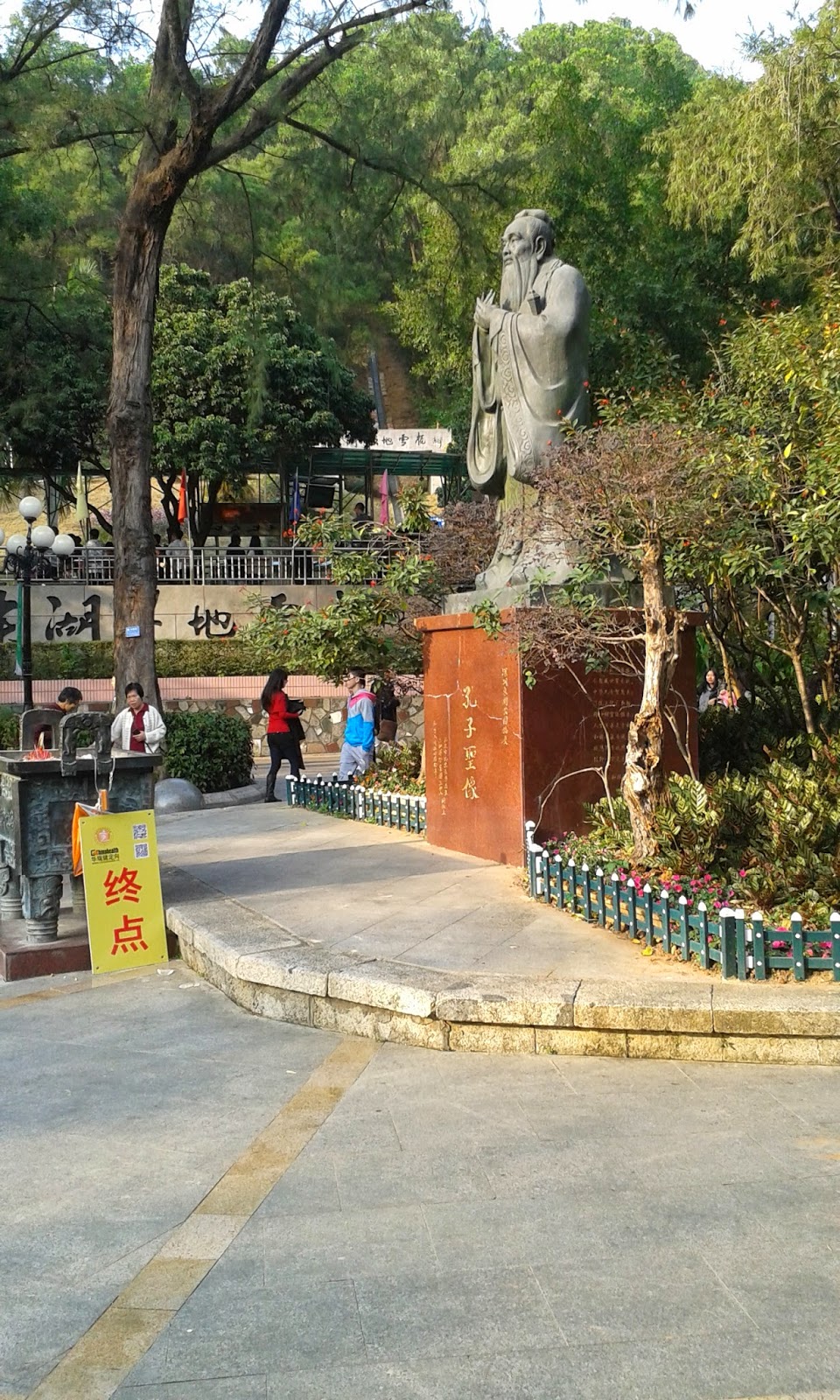 Basically, the course had a lot of running (e.g., the first and the last legs). It was not difficult, since the bridges dominated route choice. The accuracy of the map and the control placement looked fine with me. One place that annoyed some of the runners was #2 to #3. One had to decide which way to cross the river. The better choice seemed to be turning right (go west) and using the small bridge. However, on that day, many people were fishing on the bridge. Some kids blocked the bridge to forbid runner to pass through. Therefore, most of us had to run around more.

#8 to #9: I was a bit agitated to see a long run choice between running clockwise or counterclockwise. Still, I made a serious mistake by turning to a wrong path when using the counterclockwise route. Moreover, so kids around #9 really wanted to show me the location of the control. I would thank them even though their help was unnecessary.

#11 is the picture below. Just a control between Chinese-style tall rocks. 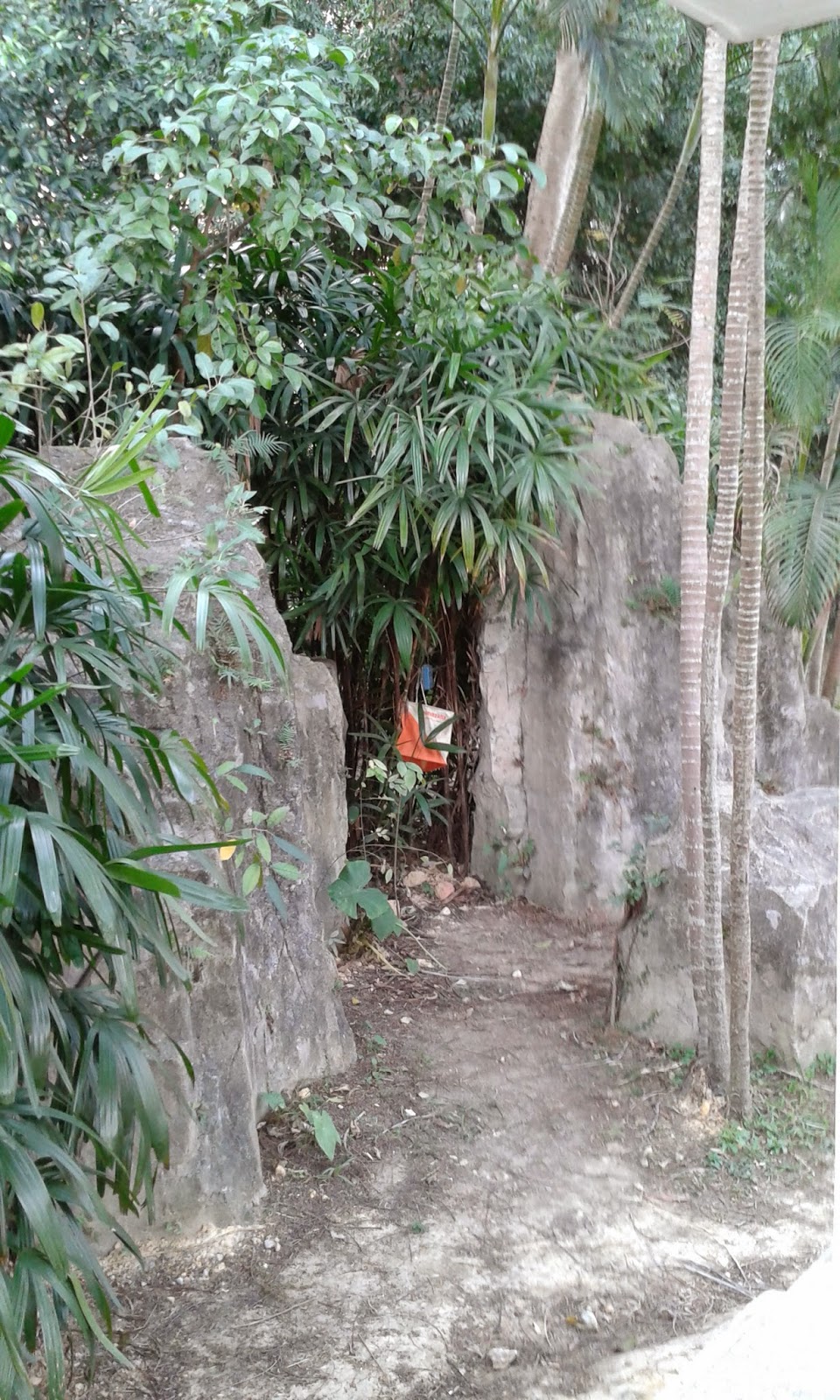 Otherwise, I did not have much to say about the course. I did not do many sprint courses, so I could not judge if the course could be made more challenging.

After the sprint, it was near evening. I was following the orienteering seniors to have fish hotpot. It was very nice!

The bonus after dinner was a night orienteering inside a school. The map looked like this: 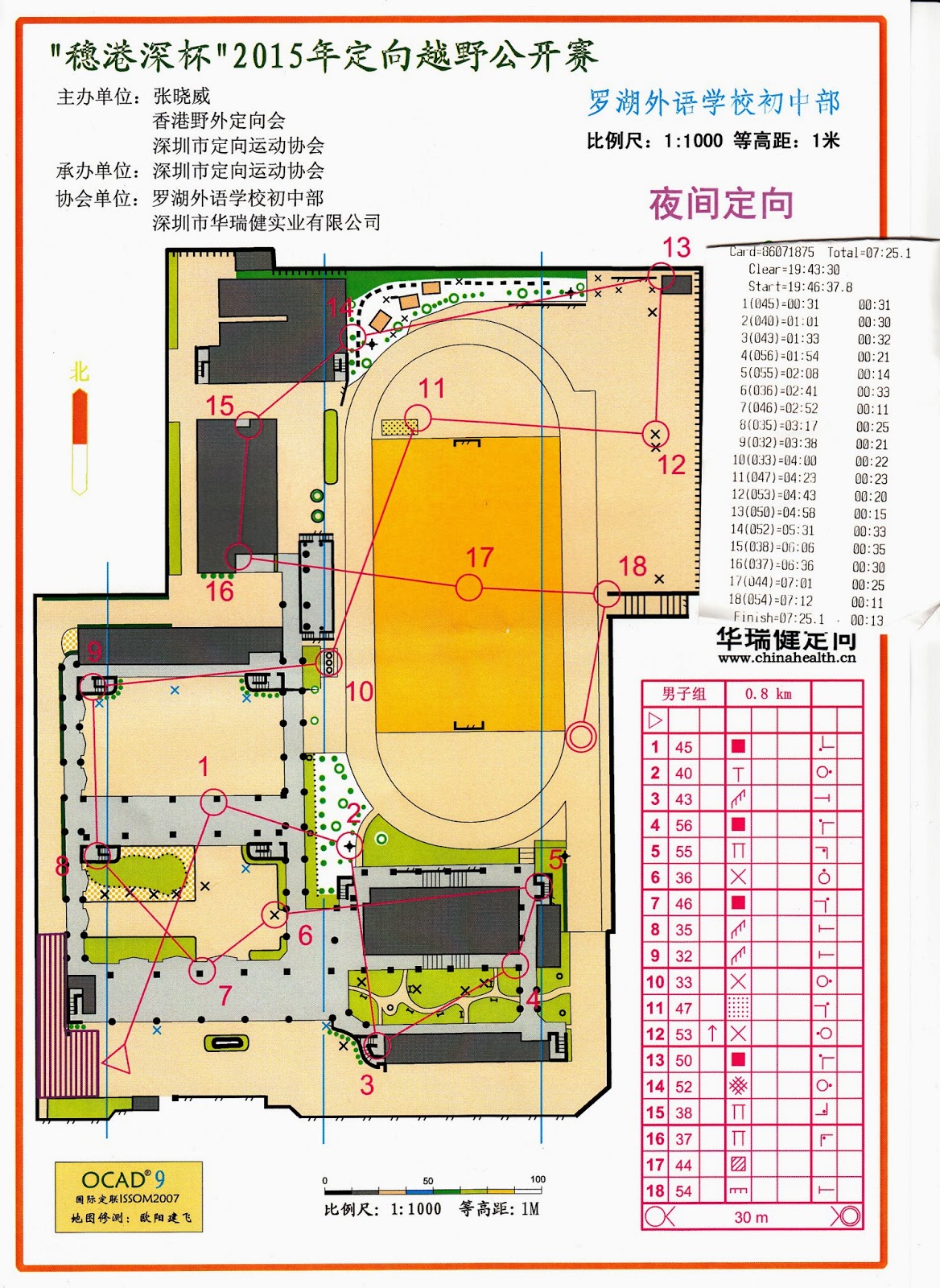 There was also a panel that talked about the history of the competition and means to improve publicity of orienteering. I learned that the development of orienteering in China was greatly influenced by Hong Kong in the 1980s. 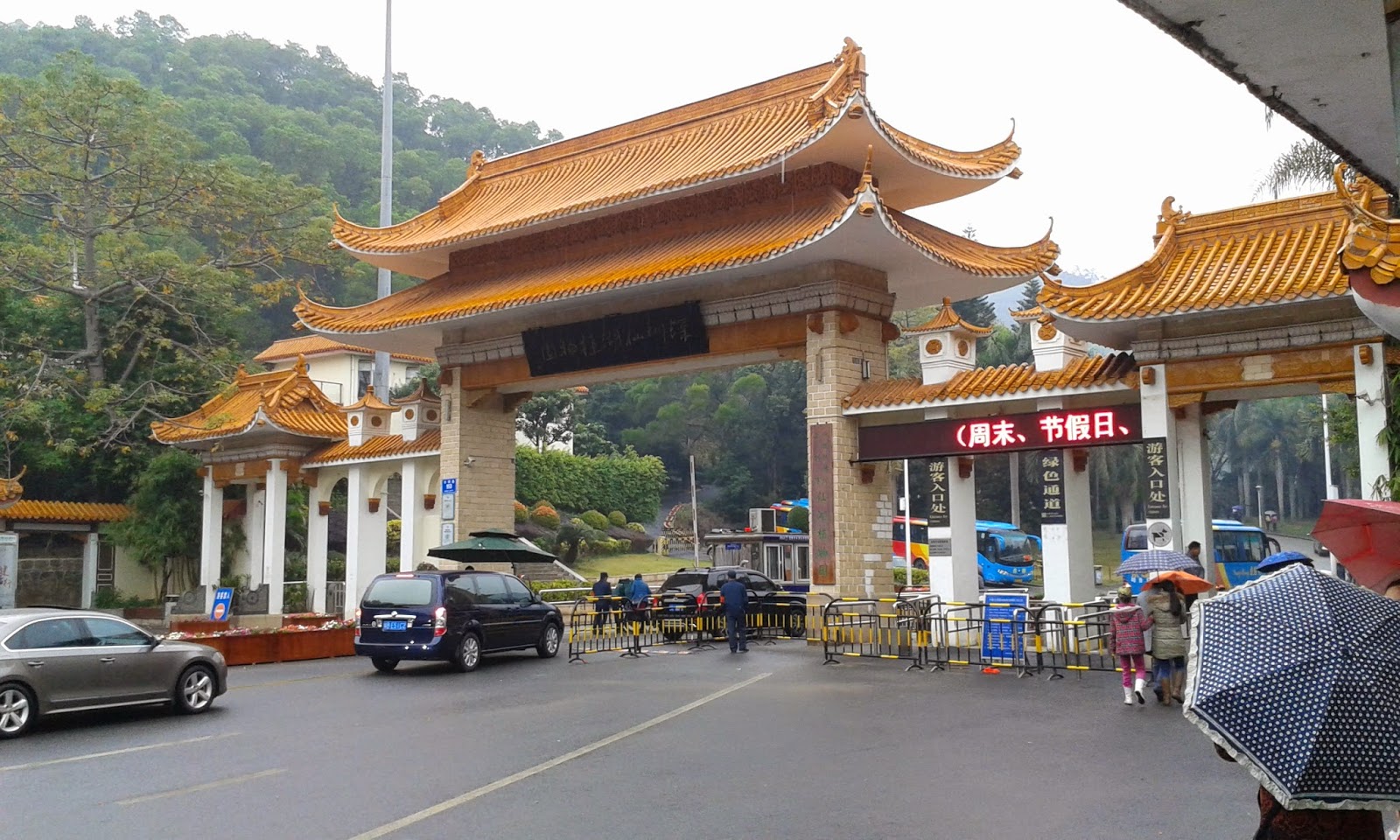 In the morning, there were some drops of rain. In the day before, I was lucky to find a group of people taking a taxi together to get to this place. This place usually had an entrance fee, but orienteers were exempted on that day, given that they arrived on time.

We walked about 30 minutes to get to the event center, which is shown in the picture below: 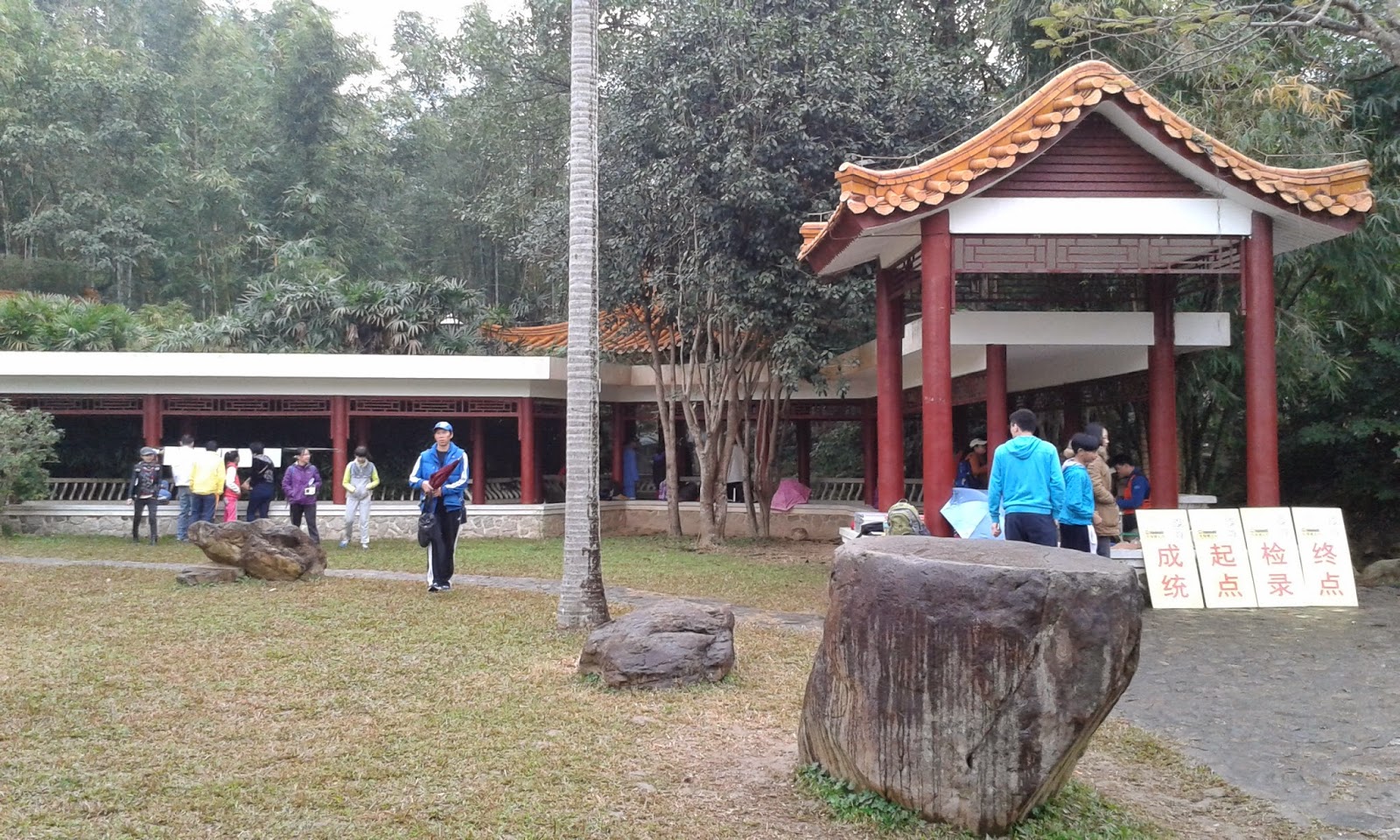 At the start, I could see a pagoda on the hill. 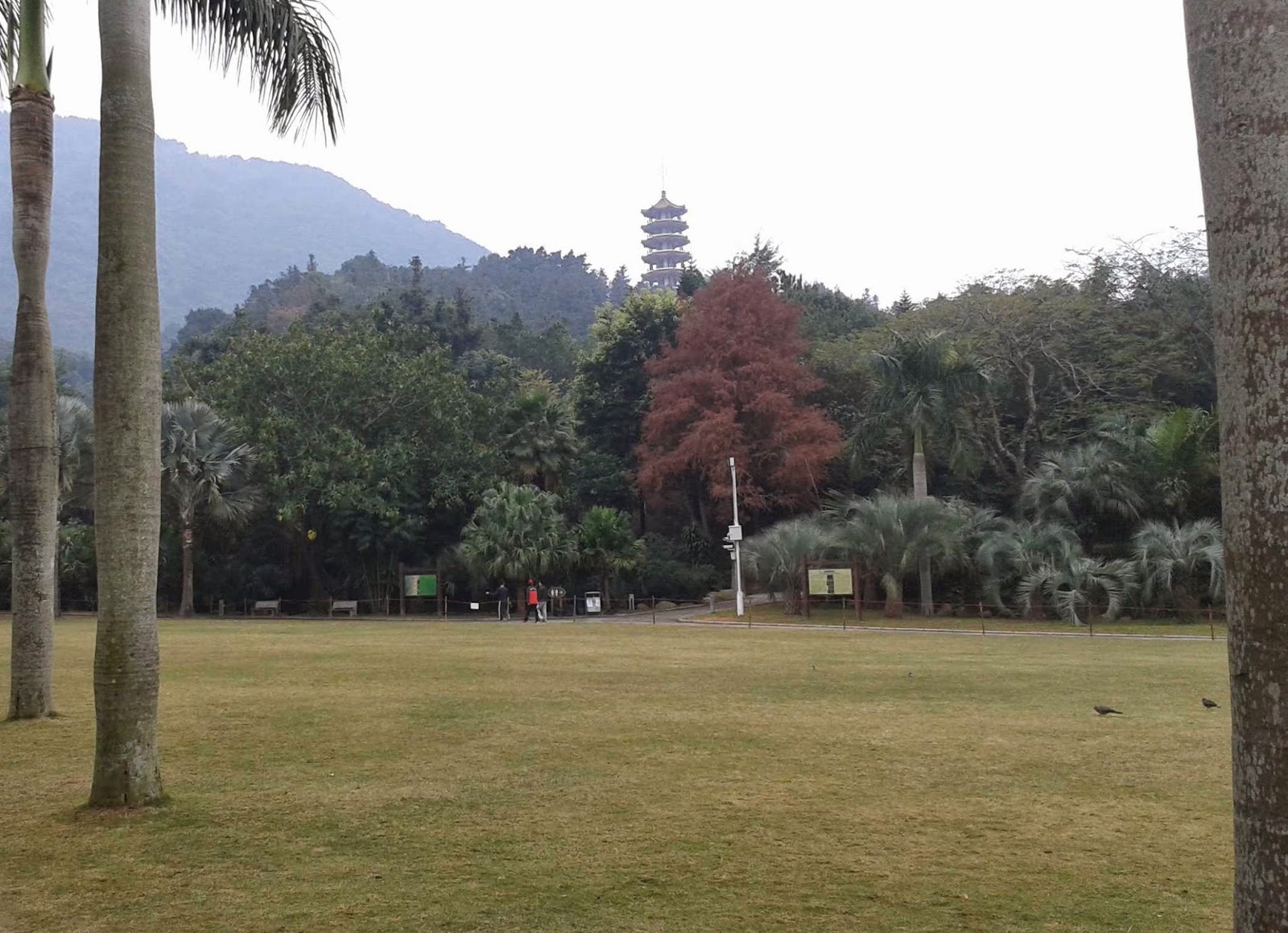 Today’s course was middle distance, which supposedly tested navigation skills. Here is the map for the ME course: 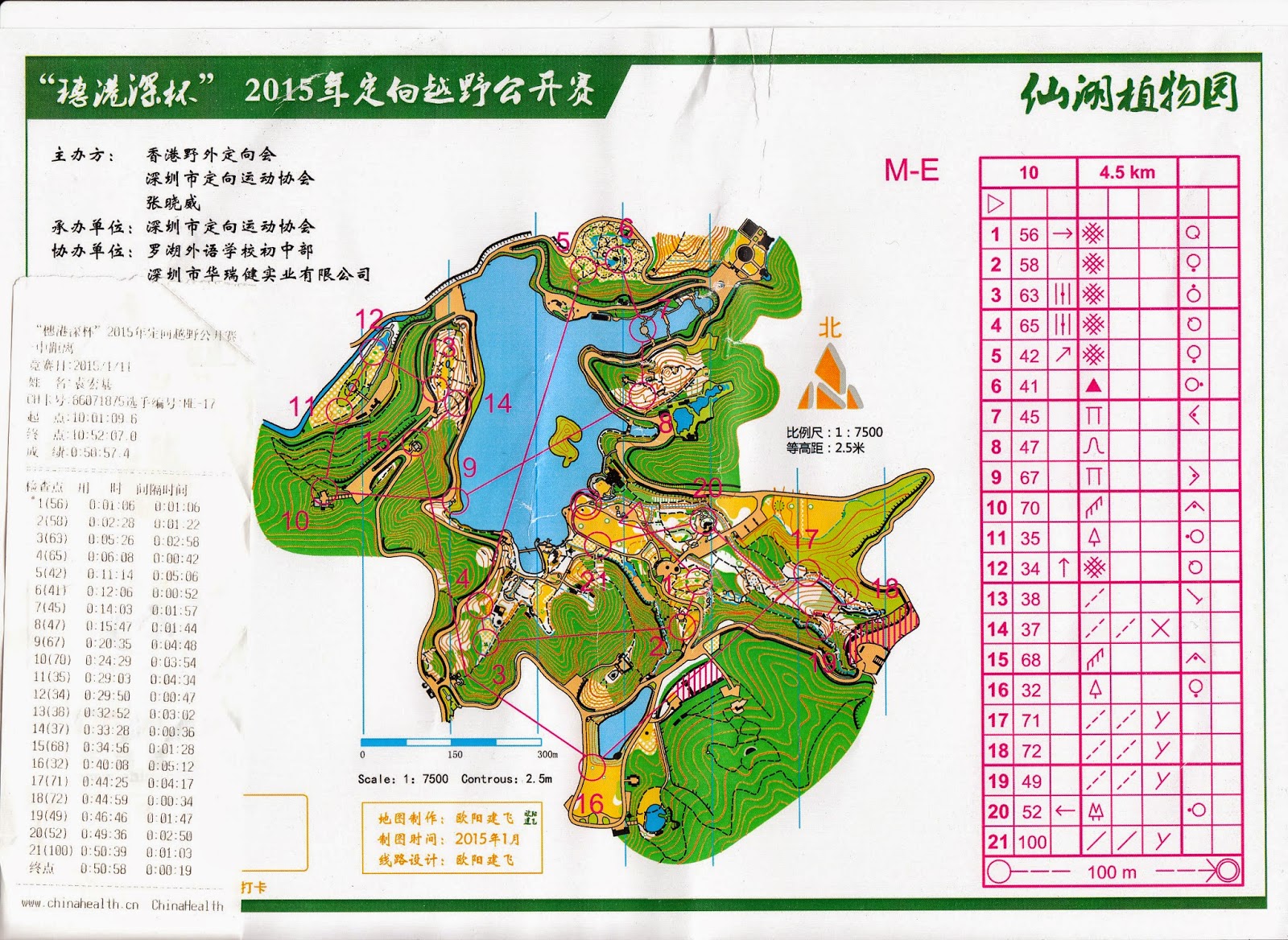 This course had more fun than yesterday. Control #1 was in a relatively confusing area, and control #3 required some thinking of the best route.

At control #5, I got into a very interesting area that I returned after the race. When I checked the electronic punch, why was the number incorrect? When I turned myself to the opposite side, aha, there was another control that was mine! 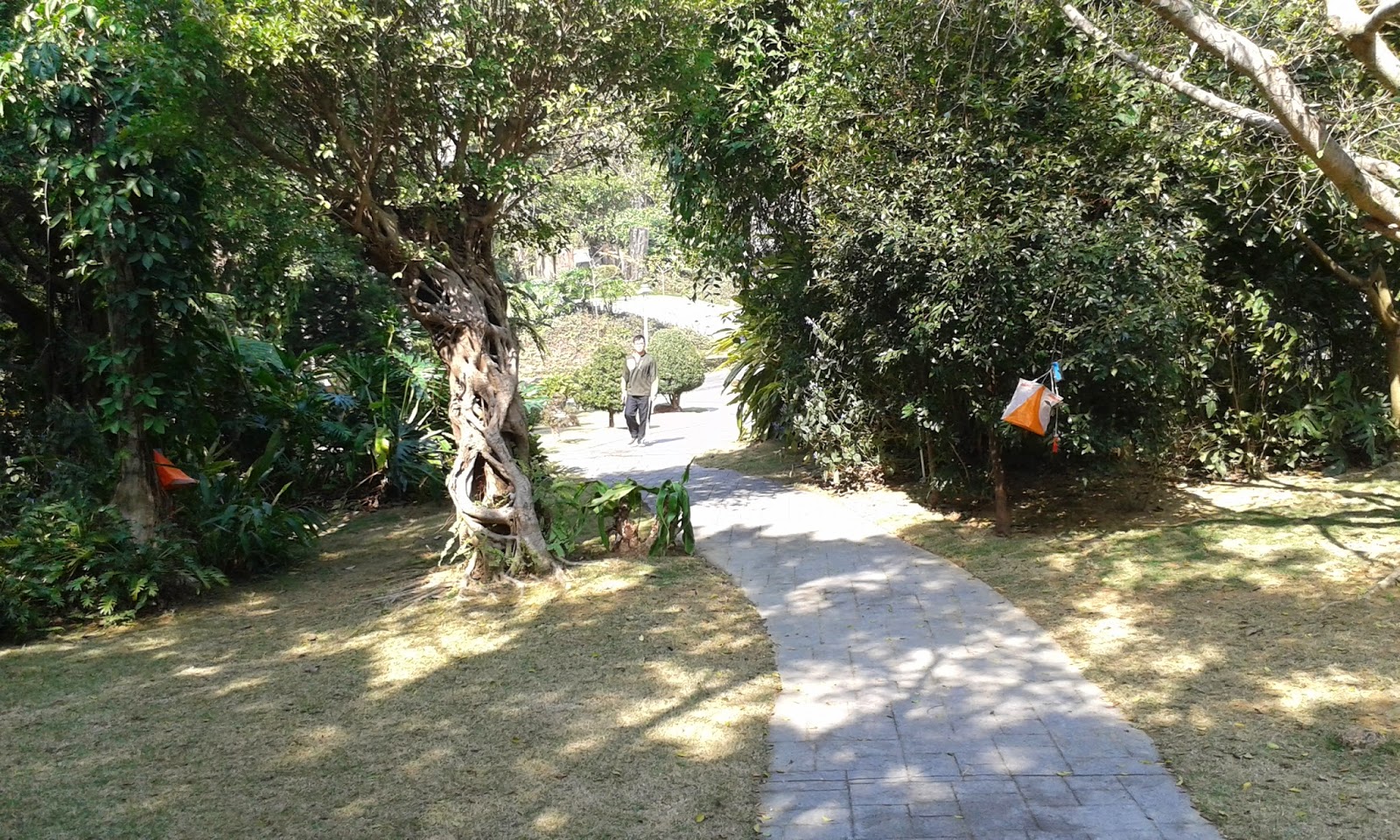 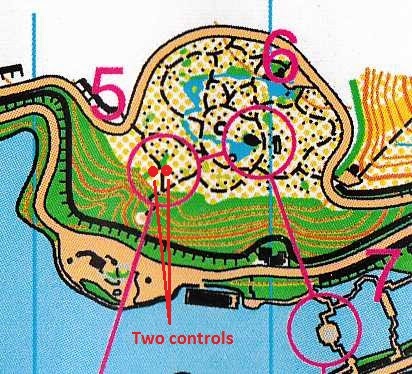 After the race, I realized that the WE group has the other control. However, these two controls were so close that I could take both in one picture. Isn’t that there is a control proximity rule, when controls cannot be too close to each other? I have a habit of checking the control number before punching, but I think the course should not contain two controls that are too close to each other to trick people.

The following picture was control #6. The person was removing the control after the competition. It was also located in an interesting area. 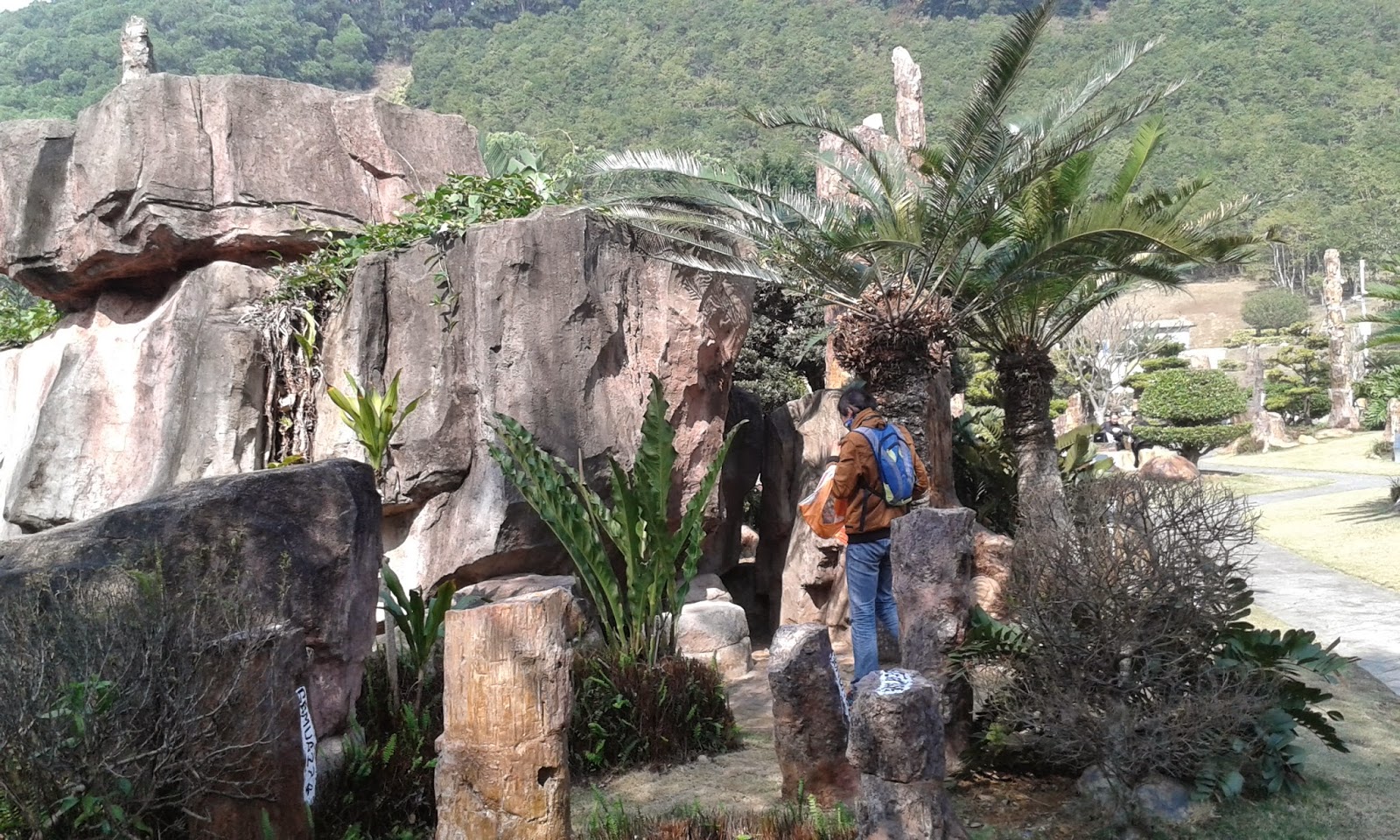 Then, this is a picture of control #7, at a pagoda in the middle of water: 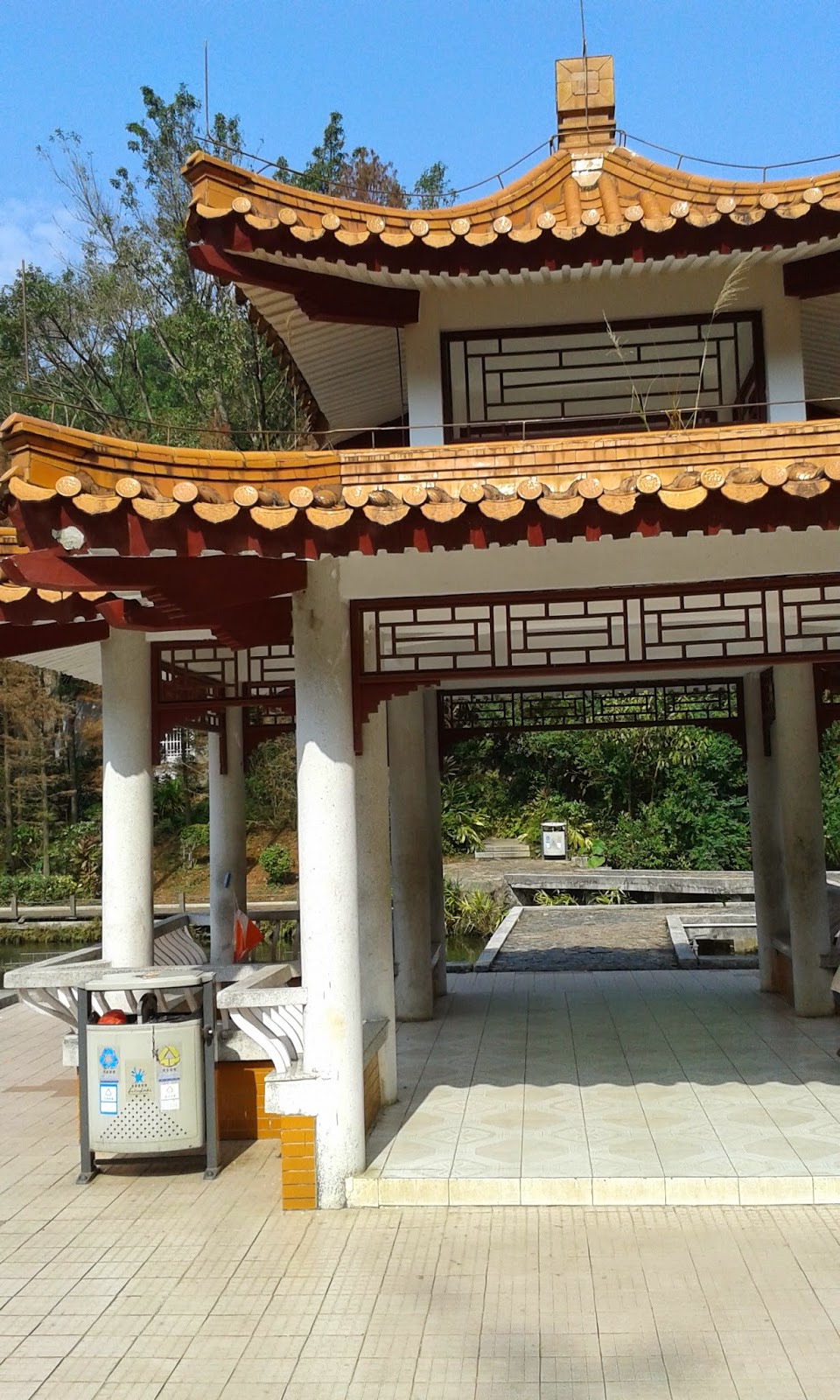 I like the design of control #8 to #9. There were some decisions to make.

After that, there was a lot of physical exercises, in the form of going uphill, downhill, uphill again, and a long run on road.

Here is my GPS data on the map: 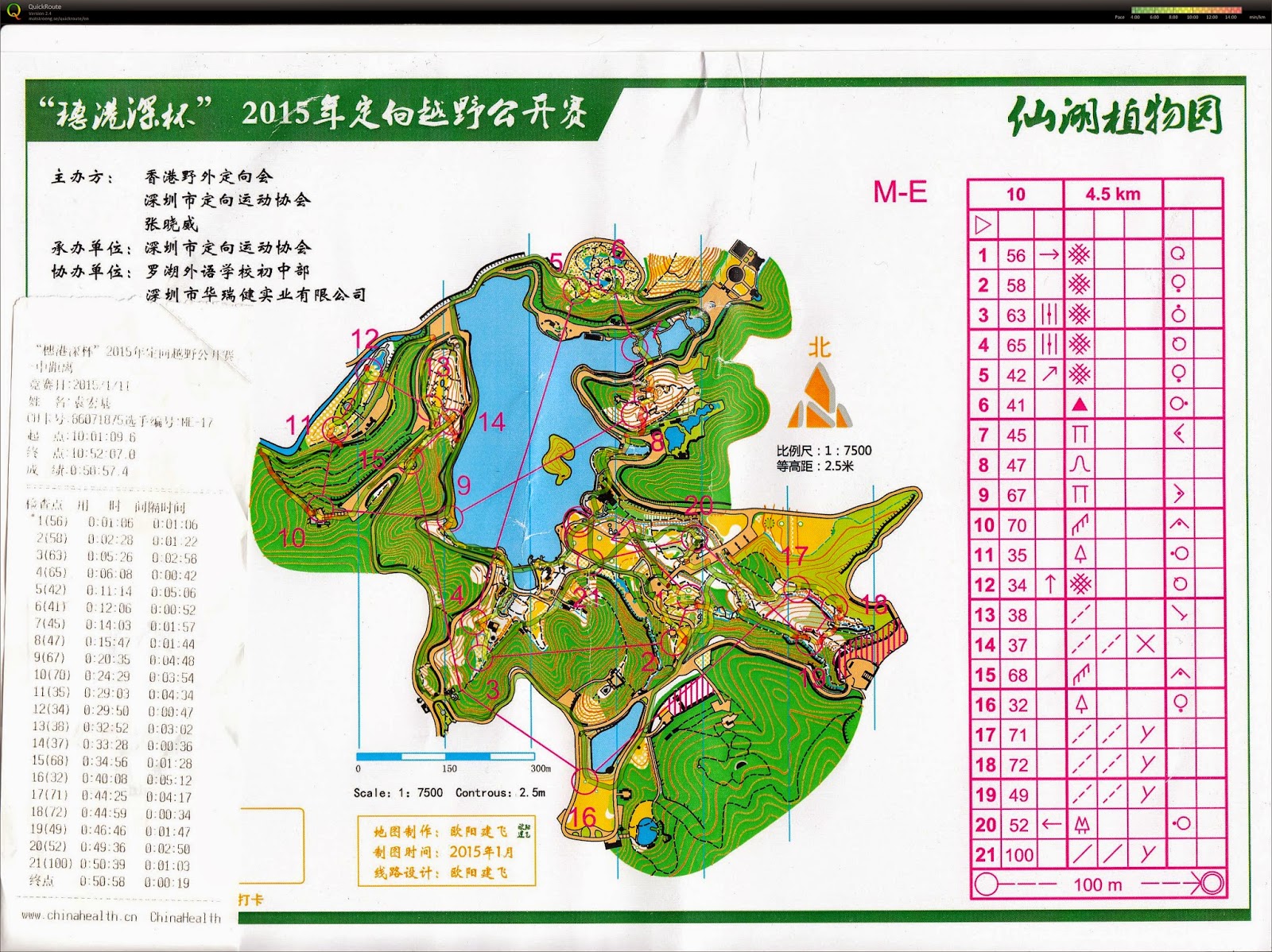 My results were below. I was number eight in both courses. I must like eight a lot. 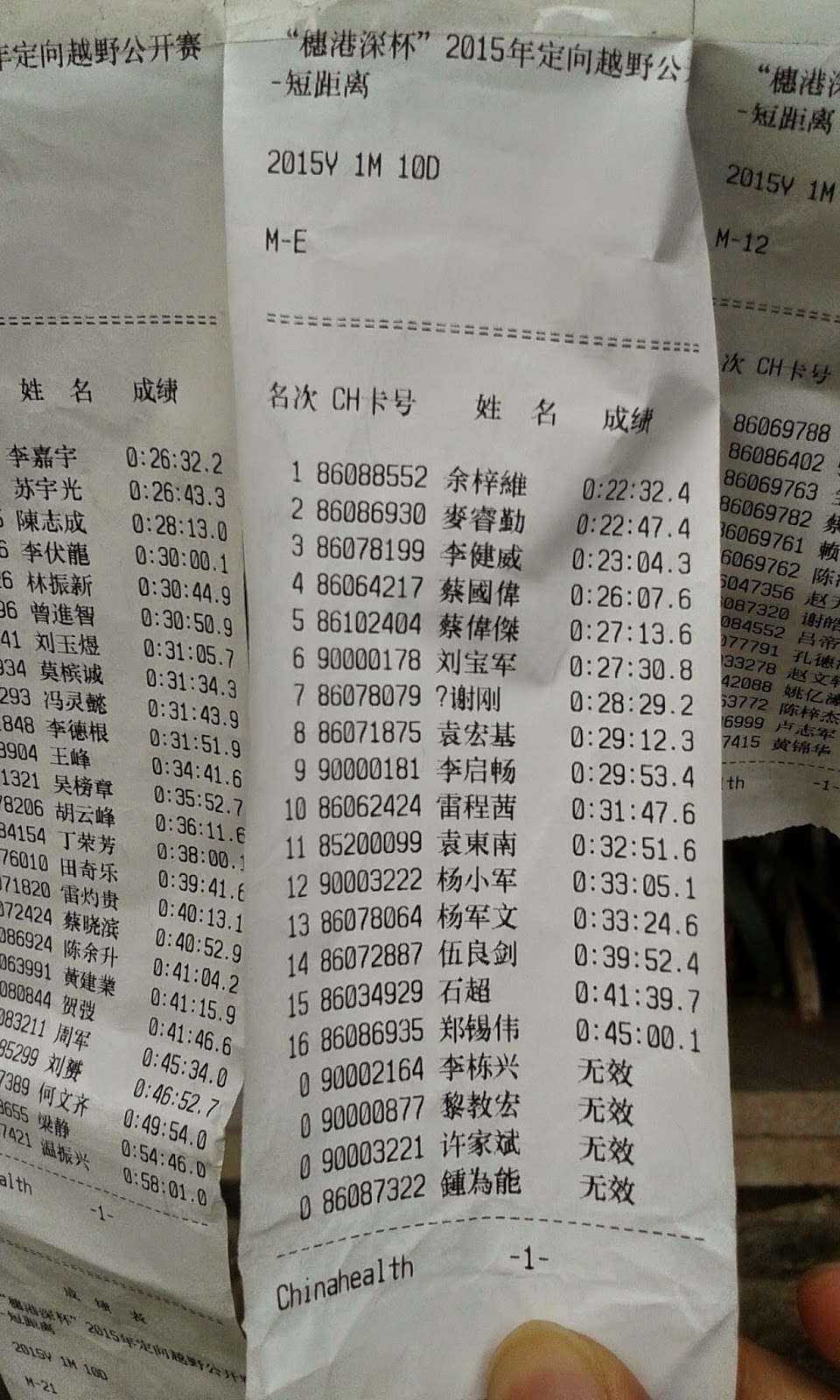 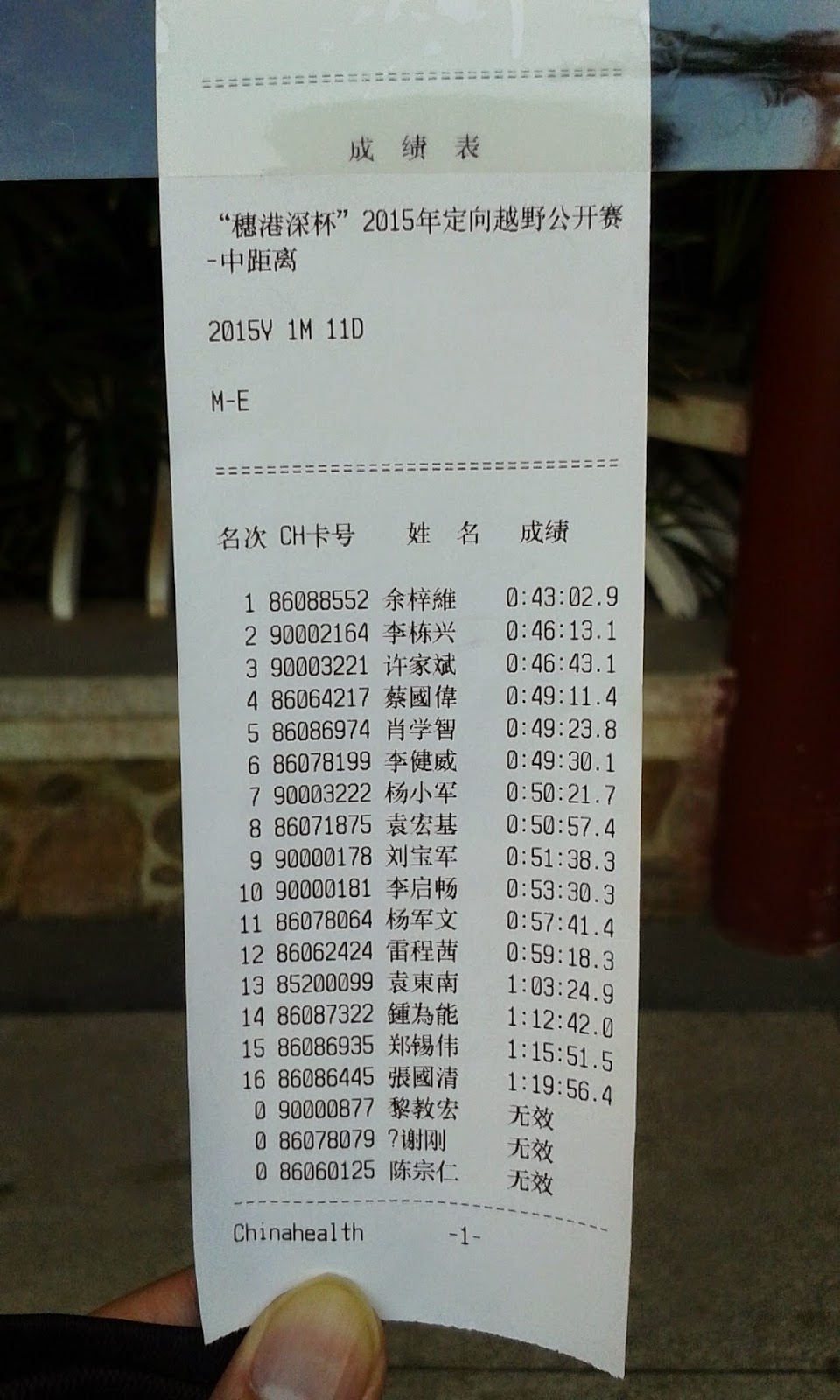 After everyone finished the course, I walked back to several areas to check the map accuracy. Several people expressed that the map could be improved. When I walked back, I did agree with this comment. I will use an annotated excerpt of the map to discuss:

On my way to #7, I was lucky to find a path that led down to the water earlier. However, when I was in that competition, I did not see that path on the map. My hypothesis was that the purple line that shows the next control on the map covered the path. 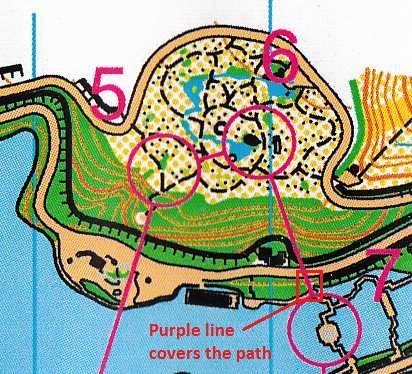 Also concerning the route choice to #7, there was a trap that led runner down to some objects, but not totally to the road (see the map excerpt below). The object is the picture below: 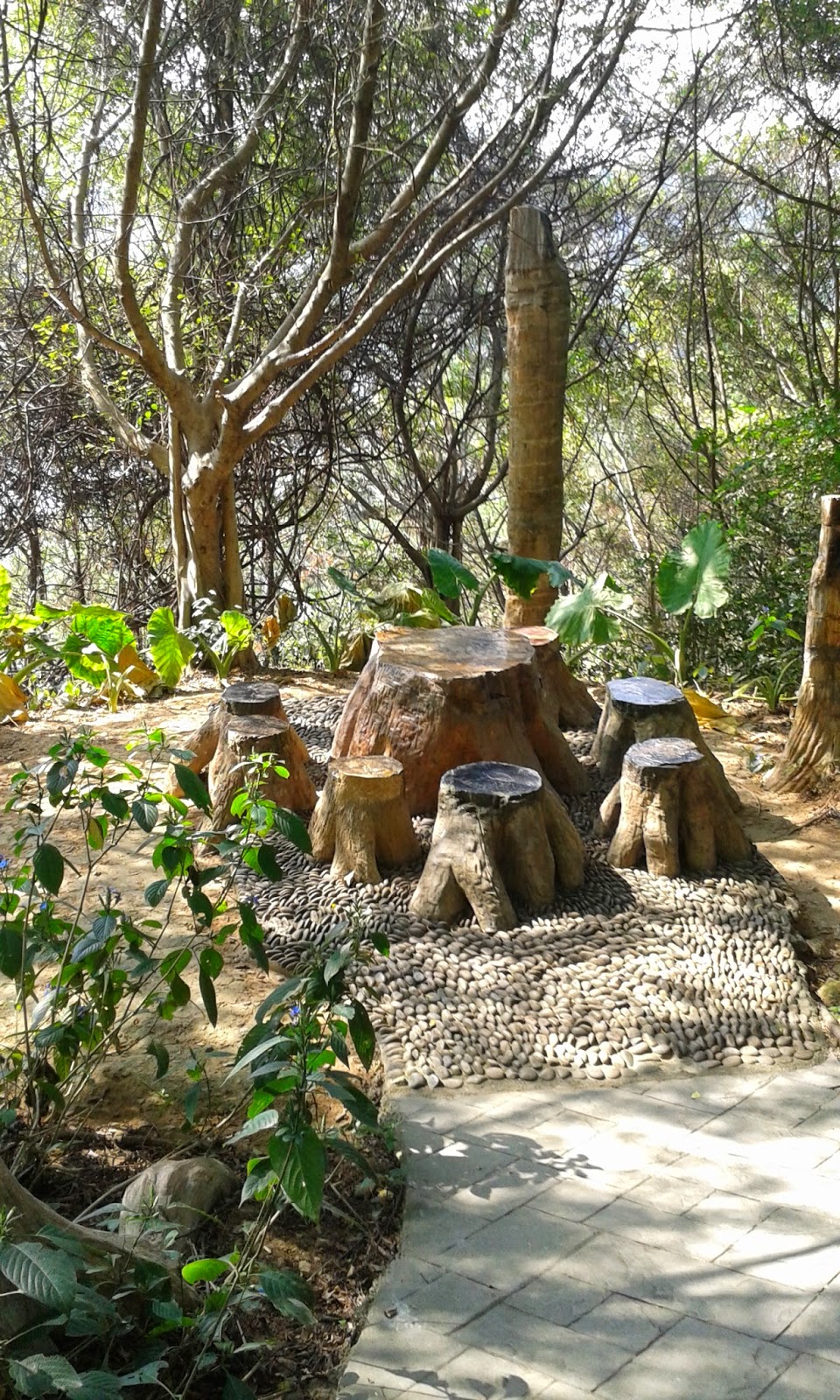 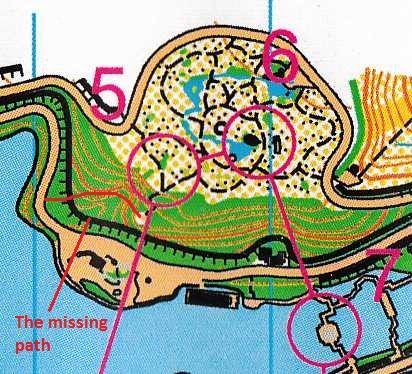 However, to the north of this object, there is a path. In fact, I used that path from the road to get to this object. However, the map did not show the path. 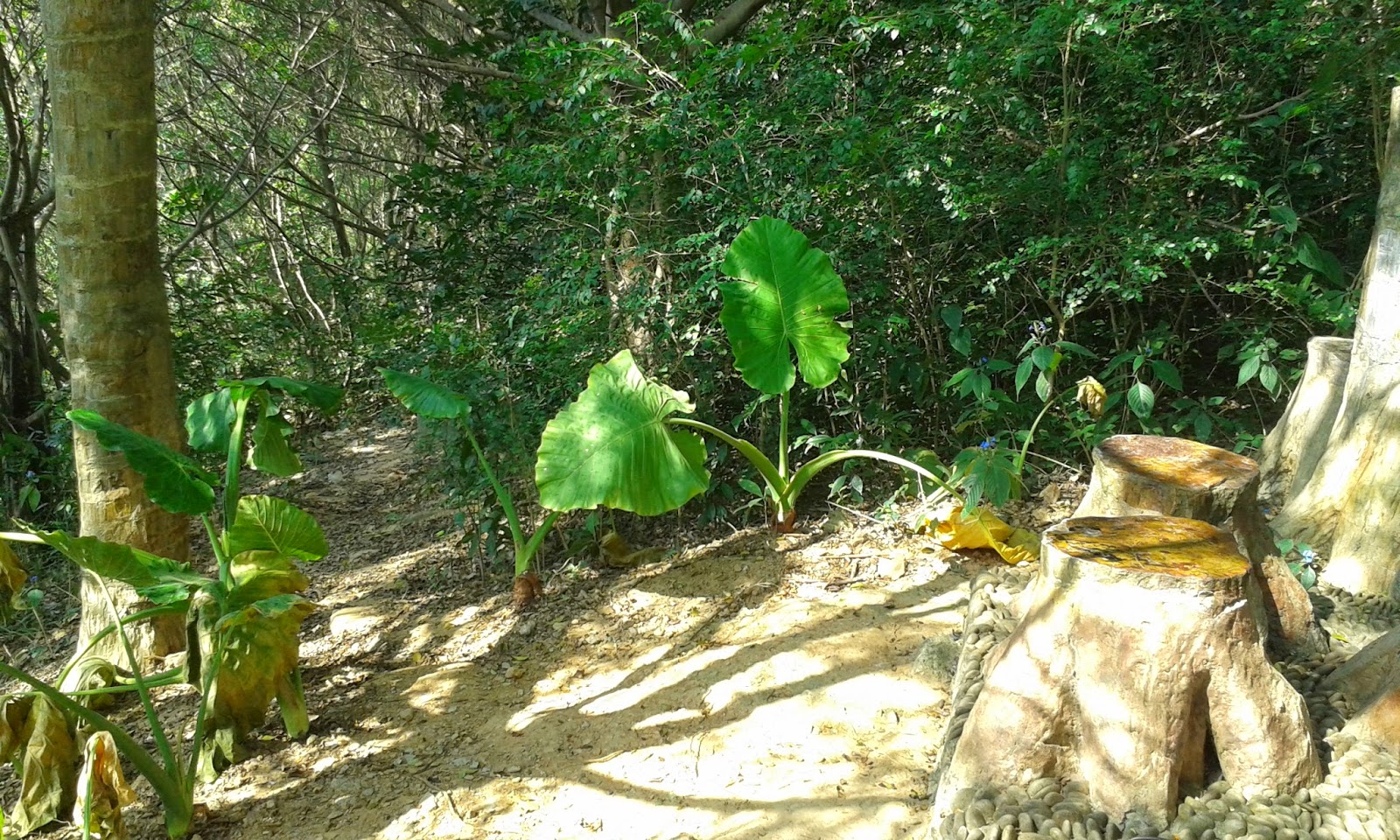 This one is not about the inaccuracy of the map. I would even praise the resourcefulness of the organizer. Possibly, the organizer did not have enough control bags, so they used a cloth bag that has an orienteering symbol to act as a control bag. The location of this control is shown in the annotated map excerpt above. 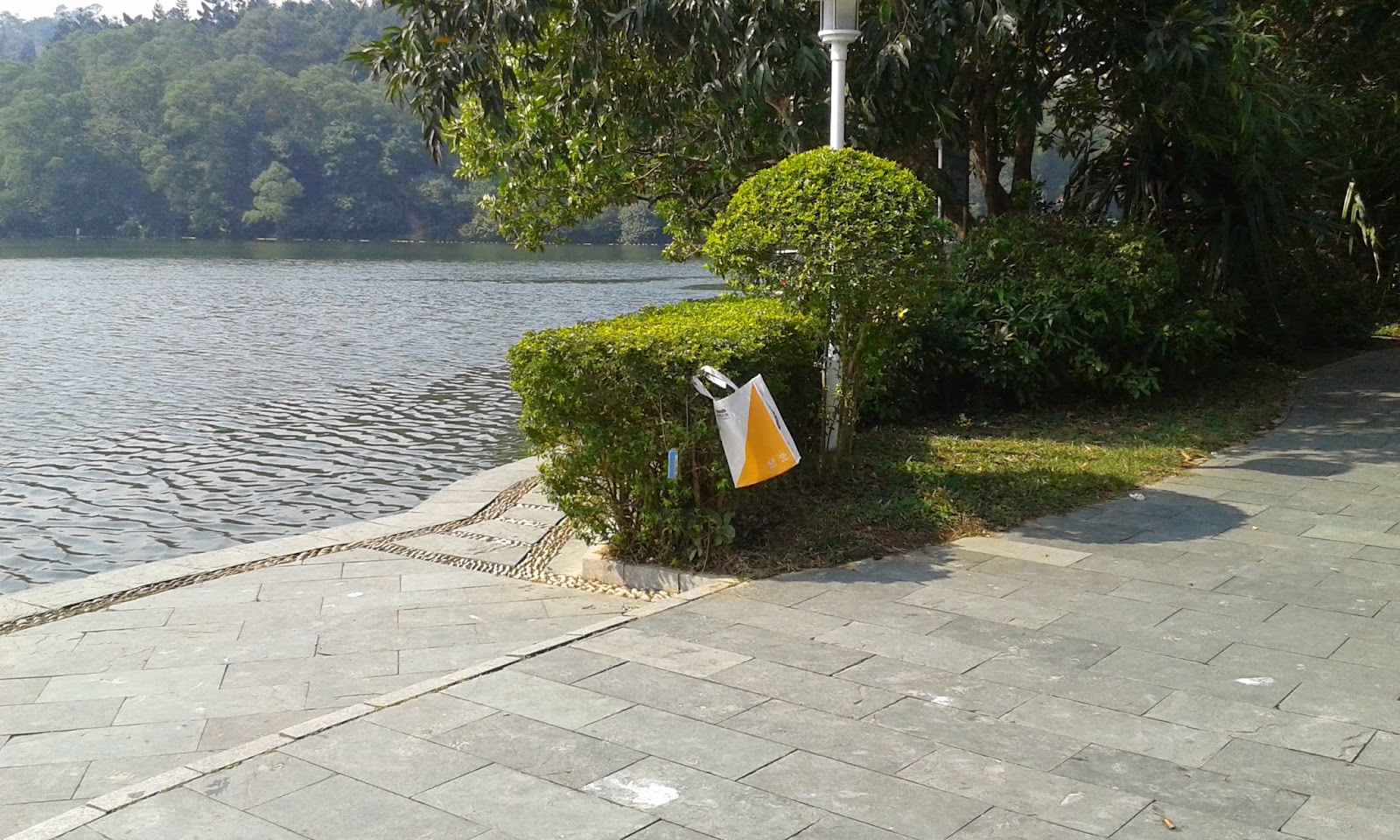 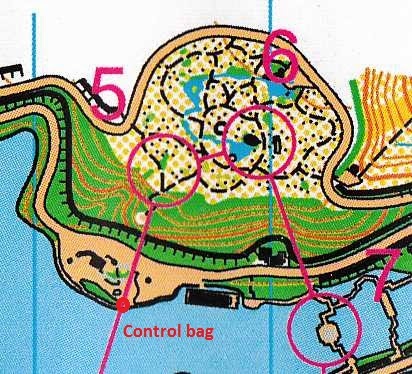 I also heard that from #9 to #10, some people used the straight line route to climb the dark green area. It turned out that that area was not as dark green.

Besides walking back to check the accuracy of the map, I also went back to that interesting area. This area contained a lot of fossilized trees. These fossils had a lot of history, and I would like to learn a bit about these. I really like being a tourist after being an orienteer. 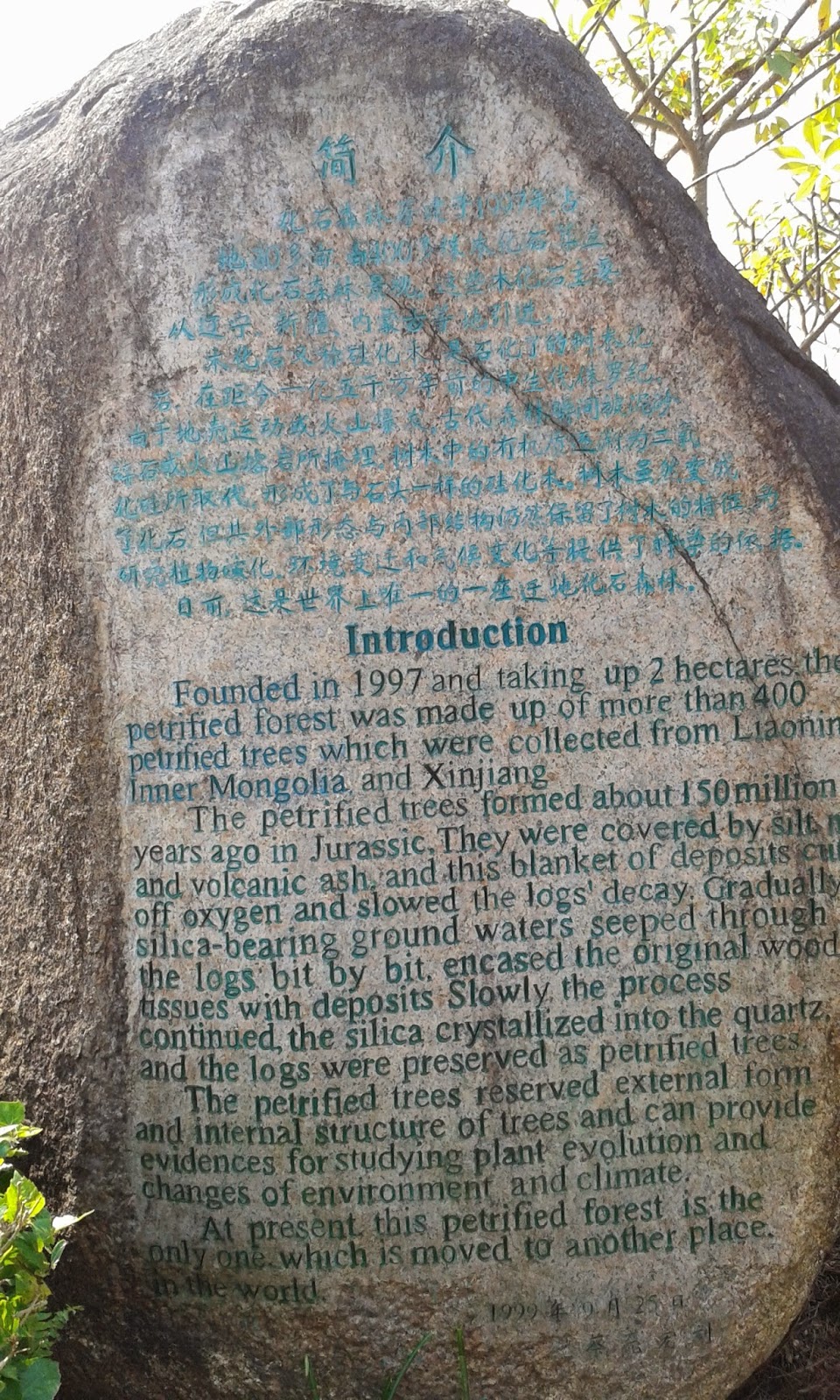 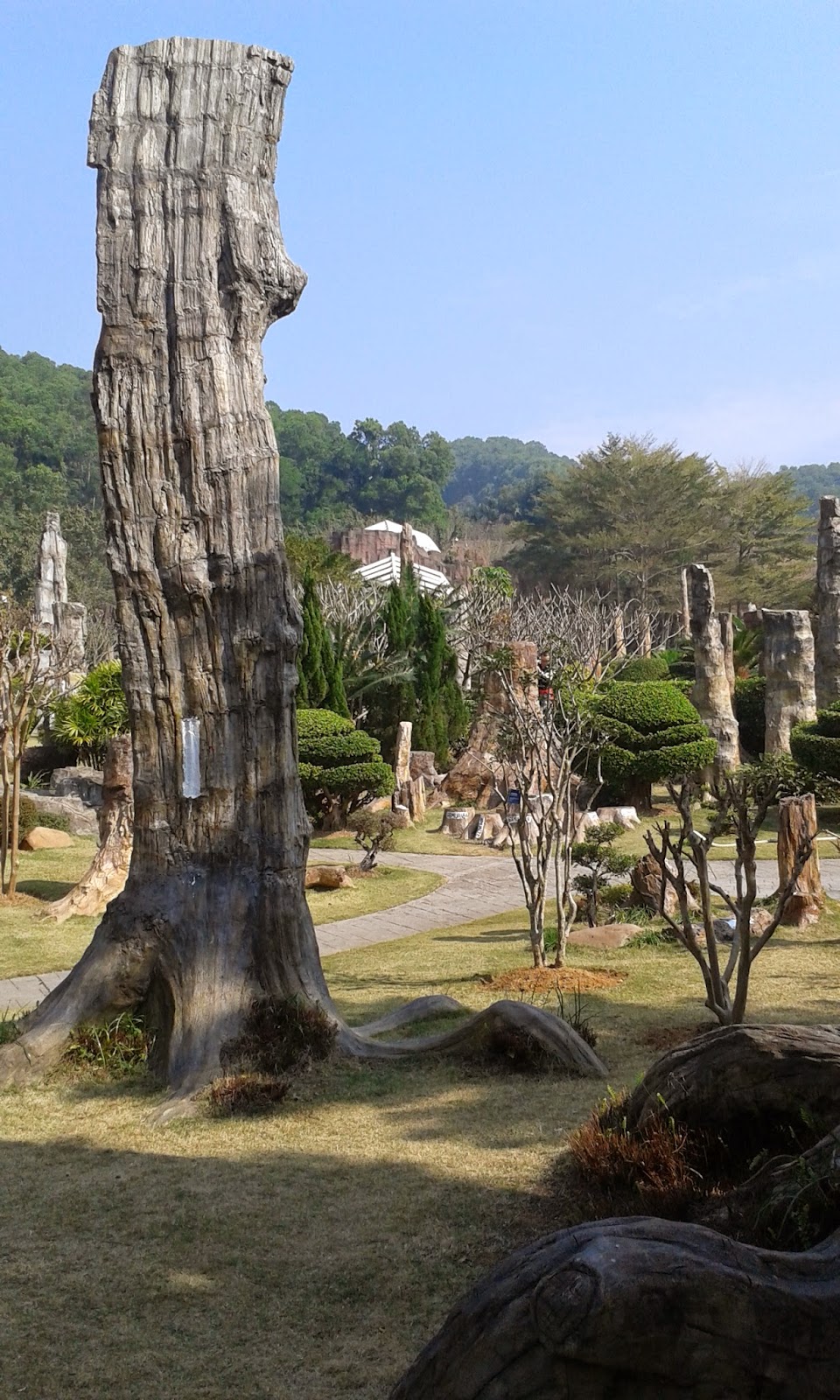 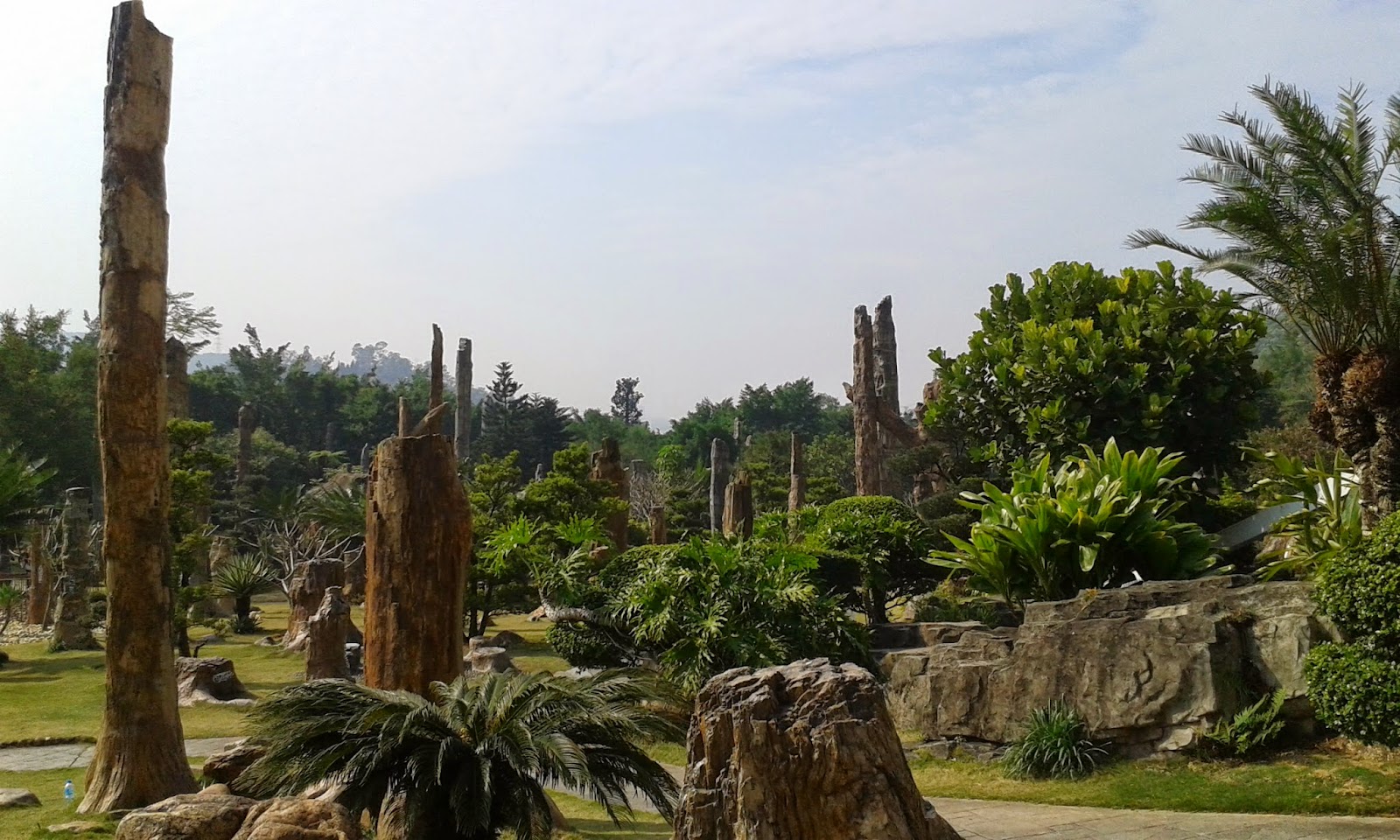 I think these two races were still decent. There were no obvious control placement errors. Some controls led to interesting places. A few legs needed some thinking. The sprint could be made with more thinking and less pure running. The middle distance map can be more updated.

What I did not know was that on the same two days, there was another orienteering competition in Shenzhen that was less publicized in Hong Kong. There was also a sprint on one day and a middle-distance on another day. Both of the courses looked more technical than the competitions that I participated. There were more white woods and more intricate contours. I wish I could have joined the other competition! 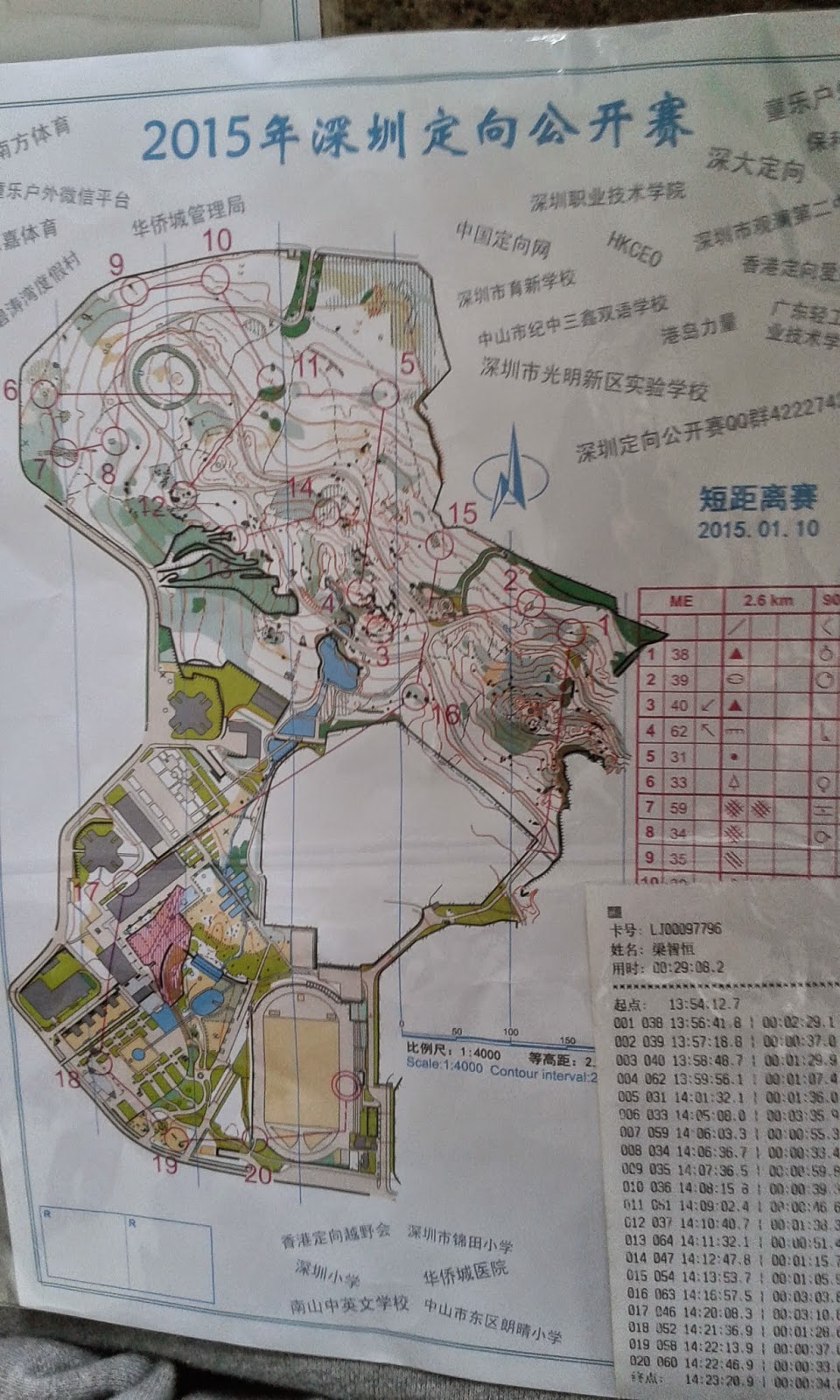