1.       The event
I remembered that I had high expectation on this event. This place is about 40 miles south of Indianapolis, IN and near Bloomington, IN.  The area is hilly, which is very different than the generally flat terrain in Chicago area.  Still, the forest is generally easy running (i.e. white forest in the orienteering map).  Moreover, a blue course is expected to be seen in this event.  In the US, a blue course is the advanced course with the longest length (i.e. > 8 km).  I am willing to enjoy running in the hilly forest for longer time.
Therefore, I attended this event.  It was a day that was well below freezing.
Map showing the location of Yellowwood State Forest.  It is close to Bloomington, IN, where Indiana University is located.

I took a lot of pictures in this event.  Therefore, I would rather put more pictures than words in this entry. 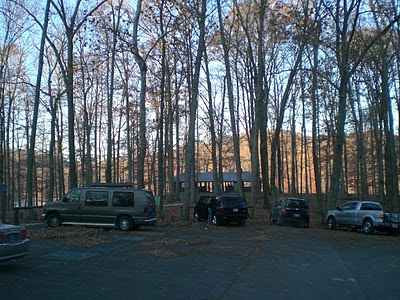 In ICO events, we usually have to copy the course from a mother map 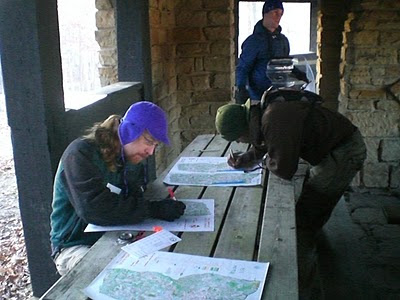 I took some pictures of the other courses.  For the beginners, try reading the White and Yellow course and think about how you would tackle it.
White – the easiest 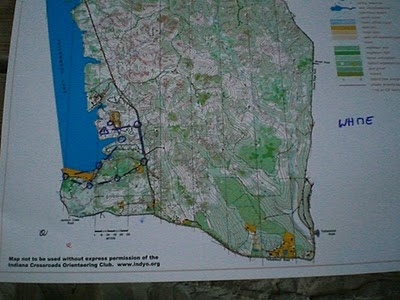 Yellow – for the advanced beginner 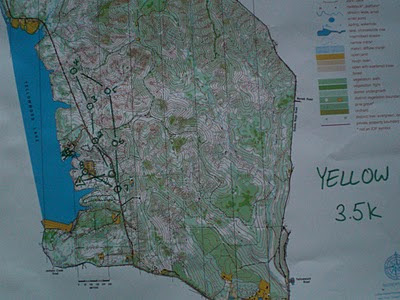 Orange – for the intermediate orienteers 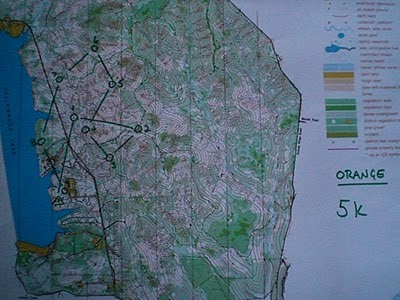 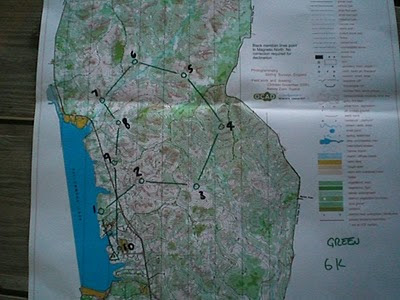 Note that the map is huge.  The map had a size of almost four A4 papers. Last year, a 6 hour/12 hour rogaine has been organized in this area.
Now, the featured blue course that claimed to be 8.5 km long (and my route): 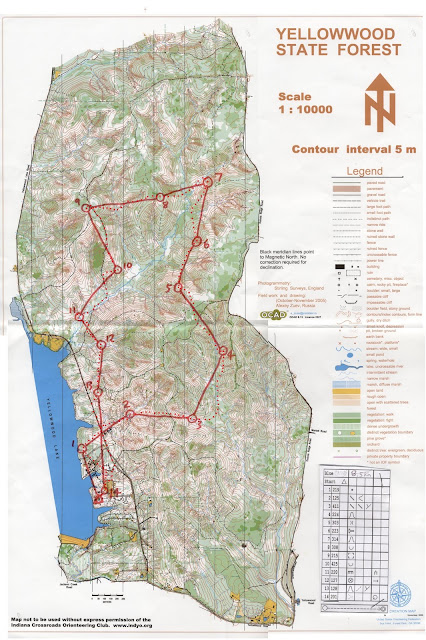 This course was the same as the green course, but controls 6-9 were added.  After drawing the map, I somehow felt that the course was shorter than 8.5 km…
As we drew the map, someone helped to start a fire.  Warm… 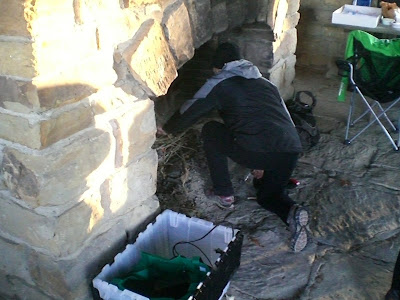 This is the first time to see ICO to test a e-punch system.  The orienteering events by ICO usually used traditional punches to verify visits of controls.  ICO only had a few of these e-punch system, so I arrived the event center early to ensure I could test the system.  It turned out that this e-punch was the largest I had ever seen. 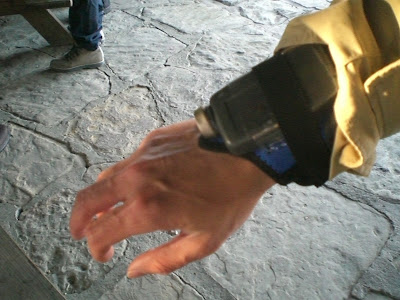 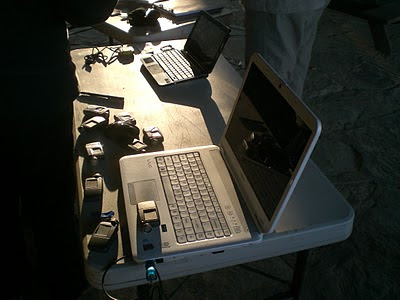 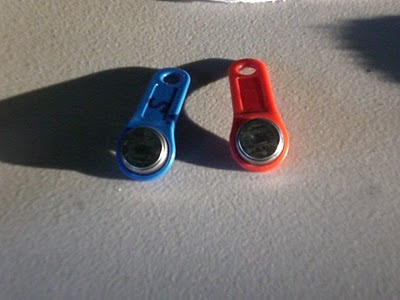 So I had finished drawing the course on the map and I could start at any time! 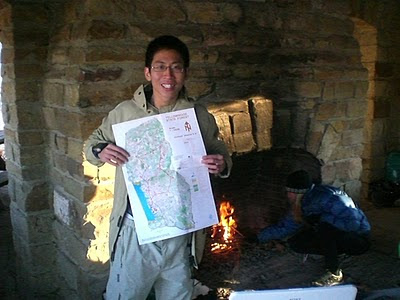 The location of the control 1 looked like the picture below 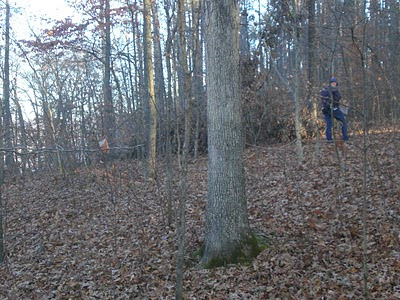 A picture on how the control looks like.  There was a metal piece attached to the traditional punch, which is for the e-punch purpose. 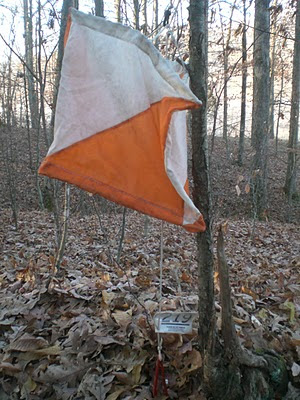 On my way to the second control. 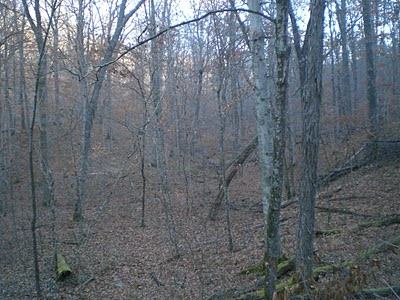 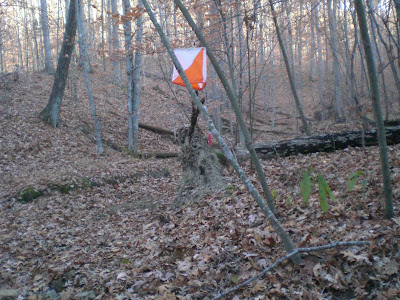 On control 3, I had to go uphill.  I did not see any better route other than going up and then going down.  Control 3 looked like this. 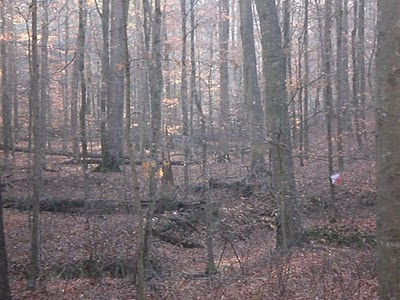 I followed the stream to guide me to the control 4.  Now I could think how I could be sure which re-entrant contained control 4. 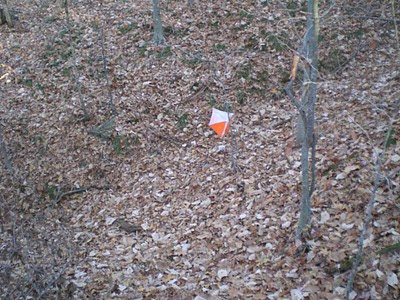 I also needed to go uphill in control 5.  Once I got to the other side of the hill, the ridge became easy to find.
Control 6 posed a classical question: should I take shorter route but have a lot of hill climbing, or a longer route but with much less hill climbing?  (see the picture below) This was a question that I was not able to answer in the past.  Like this one, I did take the shorter but more strenuous route.  When I compared my result with the others who took the longer route, the longer route is faster. 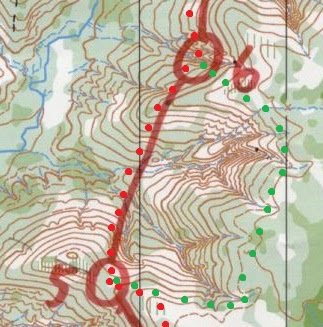 Here is a picture of control 6. 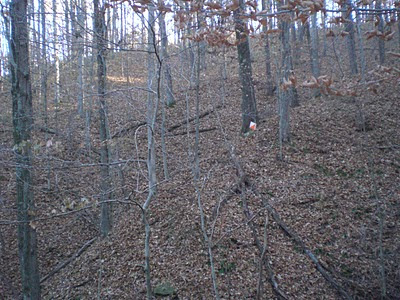 By that time I did not know how strenuous is to gain a contour line (i.e. going uphill).  Now I felt that I should not go uphill and then downhill for control 7.
A picture of control 7. 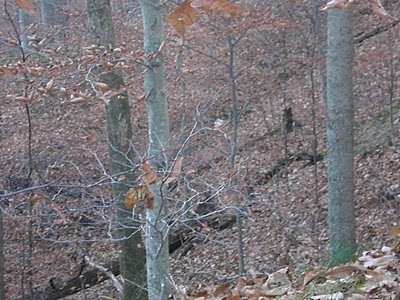 Control 8 was another one that going uphill was unavoidable.  I tried to take a picture that showed the steepness of the hill: 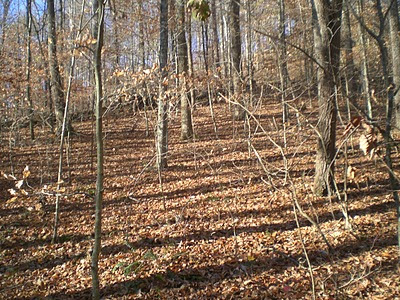 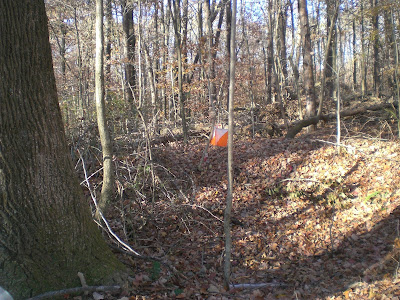 Since then, I did not take any more pictures along the course, since I almost lost my camera after control 8.  I found out that my camera disappeared, so I backtracked to see if I could find the camera.  The effort was not successful.  Then another orienteering person passed through the control 8 and said he found a camera nearby, and that was indeed my camera.  I felt so lucky that I got my camera back.
Control 9 was actually another tradeoff question that was similar to control 6.  Someone took a much longer route to northwest and followed the route back to southwest (see picture below).  I did not ask for his time on this control, so I could not have any comparison.  Nevertheless, now I think such route choice could be a valid one. 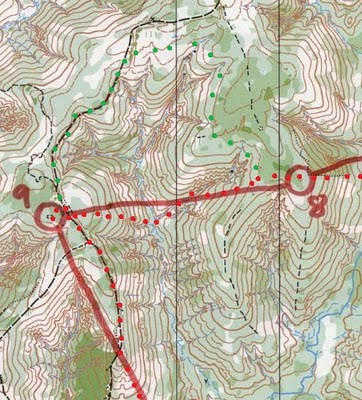 Somehow I felt that I did not have much to say for the rest of the controls.  They looked easy to navigate using the shortest route.  I felt kind of anti-climatic after finding these controls.
I did take a picture when I ran along the road from control 13 to 14. 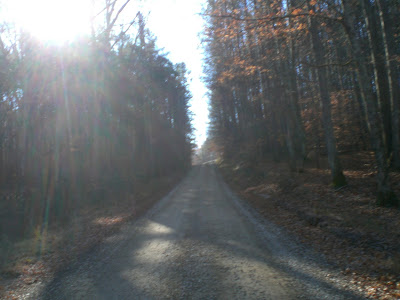 One more thing was that I was excited to see the new e-punch system before the event.  However, along the course, many metal pieces at the punches were missing, so I could not use the e-punch in many controls.
Therefore, my high expectation became some disappointment because 1) the course was actually not 8.5 km long.  I went home and used a ruler to measure the course length, and it was about 7.5 km.  This explained why I felt I only ran a orienteering course like a red course in Chicago.  2)  Controls in the later part of the course can be more challenging.  3) I could not enjoy the use of the new e-punch system because many punches were missing (I hope they will keep improving the e-punch system, though).  The cold weather, however, did not affect my mood in doing orienteering.
2.      Geocaching
Before leaving, I searched 4 geocaches near the start/finish line.  The locations of these geocaches are marked on the map below.  Supposedly, one may do geocaching without a map, since GPS is the only essential tool.  A map, however, helped me to travel around the wood faster.  Marking the locations of these geocaches also encourages me to be aware of my location all the time, so that I can mark them at the right location. 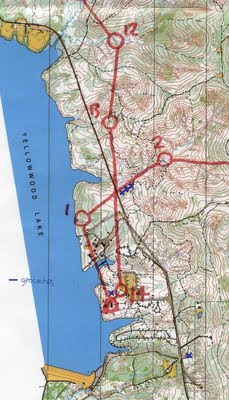 One of the caches was almost next to the start/finish line.  I also took some pictures of some caches.  These caches were just typical finds. 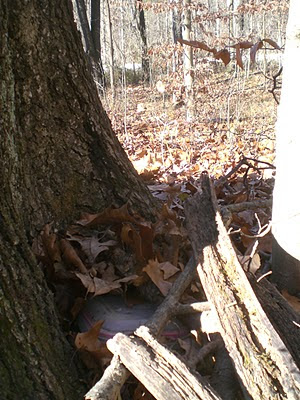 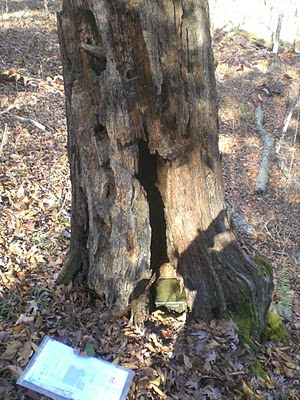 Posted by johnayuen at 7:16 AM