1.      The event
Let’s see if I could shorten the report so that I can catch up with the following orienteering reports.  This orienteering course was done after 2 full days of West Coast Swing (WCS) dancing.  Let me attach a short video to show how the professional did a routine of WCS.  If I have time, I would write a short report about that 2 days of WCS workshops.
Deer Grove is in the northern Chicago area (Palatine, if someone is familiar with Chicago area).  A picture was taken at the start/finish point.  That day was Halloween, so you can see a pumpkin in the picture. 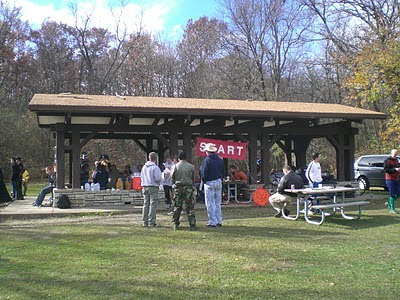 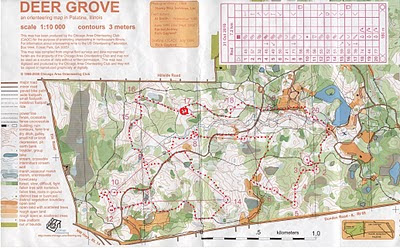 There were nothing much to comment in the short leg section.  It seemed that these controls helped me to warm up.  I could use compass bearing to visit each of the controls.
There were some comments on the medium legs A.  Some of the legs are route choices.  Would there be a better route so that I can run faster?  Moreover, would the route be unsafe? Examples of unsafe routes include lack of features for navigation. Some route is also harder to navigate, so looking at map fewer times and concentrating on running a longer route may be quicker than a shorter route with complicated navigation.
6à7: Which route should I choose?  I wonder if the following alternative route would be faster and still be safe (see the green dots): 7à8: I had some difficulty in finding this control, but I did not know any better ways to tackle this leg.
9à10: Perhaps running along the river is faster without sacrificing safety? (see the green dots) 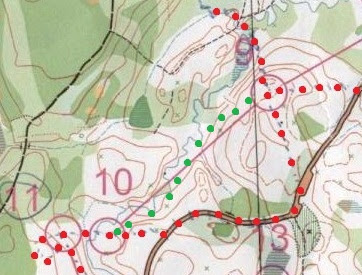 10à11: Weird thing happened in this leg.  This leg should be easy, but I thought I visited the wrong point.  I saw 95 at the first time.  Feeling that I visited the wrong control, I left that place and searched the other area.  However, I did not see any other controls.  Given that leg 10à11 is so short, I felt that control number 95 was the correct control.  Therefore, I went back to control number 95 and suddenly realized what was going on: the control number was actually 56.  I read the number upside-down.
Let’s move on to long legs.  What alternative route choices do I have for control 14 and 15? 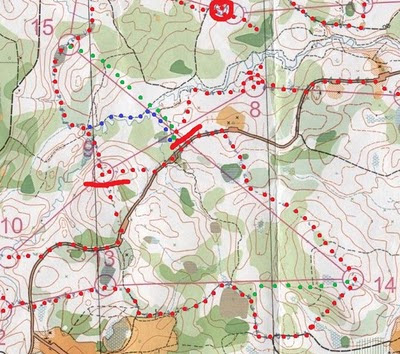 13à14: I think I should run on the trail in the first half of this leg.  In the second half, should I leave the trail early to take a shorter route (see green dots)?  It looks like I only need to run over a ridge and find a re-entrant to locate the control.  The height of the climb is not much – ~10m (note that the contour lines are 3m apart).  Therefore, I think that running on this shorter route may save some time.
14à15: I think I just need to get back to the road on the first half and use the road to re-orient myself, so a rough running direction would be enough.  In the second half, I think I should avoid the hill and use the trail instead to reach the stream. Then I can either go to the west side of the hill and follow another stream (blue dots), or to the right side of the hill that is shorter but has nothing else for navigation (green dots).  Personally I prefer green-dotted route because the hill can roughly help me to re-orient myself.  The control is not far away from the hill.
Finally, on the medium legs B, I only have one comment on leg 16à17.  The rest of the course was mostly trail or fence following.
16à17: I did not take many pictures during this course.  This picture was the only one that I took.  See the green arrow on the map below the photo for the photo taking direction. 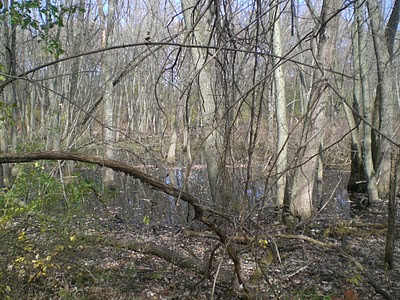 Then, I believed that control 17 was misplaced.  The map showed the control was at the stream bend that points south, but the actual control location was before this bend (i.e. west of the bend).  I did not follow the stream and went for the bend directly, only finding that there was no control.  I went farther away and then felt that I went too far, so I backtracked along the stream and found the control.
2.      Geocaching
Many caches were found when I drove along the road to Chicago.  Here I will just mention two caches that I found within the orienteering map.  The approximate locations of the caches were marked with orange crosses. Both caches were close to the start/finish point in the map.  Both caches were regular caches, but the one on the island was supposedly much more difficult to reach.  A 5 out of 5 difficulty was shown for this cache.
Some previous finder commented that the island was actually not an island.  There was a marsh that connects the island and the rim of the lake so that one does not need to get wet to reach the cache.  I found this marsh (see green dots on the map above) that took me to the island.
The next part was supposedly a lot of breaking of bushes.  Perhaps there was already some people went for this challenge.  Some indistinct trails were within the island so that walking through the bushes was less difficult than I thought.  The hide of the cache was also not too difficult.  Therefore, this cache with 5 out of 5 difficulty was not as difficult as I thought.
Posted by johnayuen at 2:35 PM