On a Wednesday night in Hong Kong, I went to the Grappa's Cellar at Jardine House in Central. It is a bar restaurant, where the center of the restaurant has a wooden floor that is suitable for dancing. The floor is not large, so careful floor craft is needed. There is no cover. I was just reminded to buy at least a drink (a glass of sprite is HKD25, ~ USD3).

This is a place that I have been to twice. Three times before this temporary visit in Hong Kong, I had been to this place to experience swing dancing in Hong Kong. By that time, I was inexperienced in swing culture in general, and I just felt that swing was also fun in Hong Kong (I did notice that it would great to have more local people involved in swing). Now, I know that the swing that I am doing is vintage swing, which is different from west coast swing and ballroom swing in the US. Okay. I will do better to respect the vintage swing community. 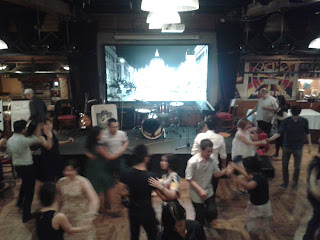 I only had four weeks in this temporary visit, and I tried to participate as much as possible. In this week, there was a band consisted of 4 or 5 people playing music with us. In this swing visit, I observed the people in this dance scene, and tried to dance with several people. It was great that there is a wide range of dancer skills. On this Wednesday dance, there was also a 30-minute beginner lesson for first-timers to try. I hope these first-timers will consider taking a few lessons to explore swing dancing more!

On another Sunday night, there was another live band. This time, however, the band is big! 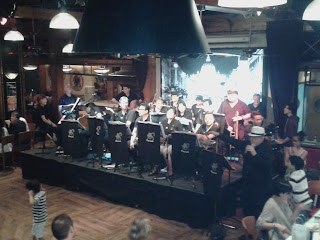 At this point, I started to get acquainted with several dancers. There was a lady from London called Lottie. She was fun to dance with and fun to talk to! I wondered if she was one of the swing instructors in Hong Kong. If some of you who reads this know some famous swing instructors, she is like Evita Arce. When people started to leave as the live performance came to a close, she remained staying to support them.

After going to the dance events a few more times and having some conversations, I began to think if more assistance can be done to promote the spirit of swing dancing. I checked the Hong Kong Swing website, and found that there is a swing alliance in East Asia. Unlike the U.S., where a few hours of driving can get you to another swing scene, one needs to fly to get to the next swing scene in East Asia. Here is a list of East Asian cities that have swing scene. At several dances, I heard about a workshop that will take place in Taipei, and another one in Singapore. It takes 1 and 4 hours to get to these two places from Hong Kong, respectively. One experienced dancer, who used to be in a scene in Midwest (Indianapolis, I think), told me that attending workshops is much more convenient in the US.

Another question in my mind is how many swing regulars started learning swing dancing in Hong Kong? I went to salsa dancing in Hong Kong for a few times, and I did see several guys and gals that appeared to be local. In swing, however, not as many. (I started to feel that I may write something insensitive concerning ethnicity here, but I would take a shot to be neutral.)  It seemed to me that most swing regulars had danced swing for a long time (>1 year, at least, guessing based on feeling the connection between partners). Only a few seemed to be beginners.

The ratio of Asians and non-Asians is okay, around 4:6. I still hoped that more locals can involve in this dance, though. I knew Hong Kong people of my age doing amazing group dances. Perhaps swing jazz is too obscure in Hong Kong, which is more difficult to raise interest. However, I also heard that in Taiwan and South Korea, there are more locals involved in swing dancing. Something can be done to promote to the locals.

Another observation is the lack of guys. There were a lot of times to find female leads guiding female follows. I wonder if it is because leading is usually harder than following. This is especially true for swing, where the learning curve for lindy swingout is steep. I also wondered if it is a culture thing about dancing for men, but perhaps it is not true, since I did see more local male leads in Hong Kong doing salsa.

I was amazed on the number of French people in Hong Kong swing. I guessed there is 40% of the total swing people, based on my consistent asking of where they are from. If a Hong Kong local comes to this dance scene, (s)he may think swing is a French thing! With a little knowledge of French from Duolingo, I tried to comprehend what they are saying and failed. Later, I learned about the explosive growth of French community in Hong Kong in the last decade. Nevertheless, most of them are nice. If I have more time to stay, perhaps I should learn some French from them! (end of possible racial insensitivity) 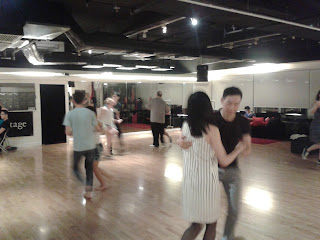 Besides the bar restaurant dance floor, I went to another place in Tin Hau area on Friday, which is a dance studio, and there is a HKD 60 cover (~USD 7). Each time, there was a different DJ. The quality of the music depends on the DJ. Occasionally, there were some excellent music playing. What I remembered the most was the Shim Sham music. If one wants to dedicate his/her time in a swing scene, learning this Shim Sham line dance is important, since it is danced everywhere. In Hong Kong, I learned a few more music pieces that are suitable for Shim Sham, and I found them so fun that I asked the DJ for the source of the music.

Although it was overall fun to see a swing scene different from where I am currently at, there were some occasions where I felt the loneliness in the dance. This was akin to the sad experience in the past. I am now in Hong Kong, but when I get into a swing scene in Hong Kong, I feel that I am not in Hong Kong. Most of the time, I spoke English in the dance scene because I could not assume people in this scene know Cantonese. Moreover, swing dancing in Hong Kong brings me to a social circle that is strange to be in: there are more Asians than non-Asians. Perhaps I feel strange because when I grew up in Hong Kong, I seldom met people out of Asian origin. There seem to be a disconnection between where I am and what I am doing. 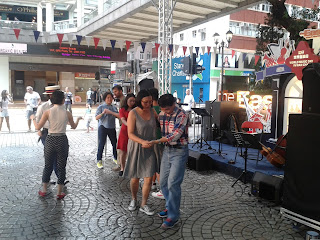 In my last Sunday in Hong Kong, there was a swing band live performance in Wan Chai. This was organized by Alliance Francaise, which, once again, gave me a geographical disconnection between the origin of swing dancing and the actual event. Nevertheless, the band sounded more like a gypsy jazz band, which closed up the geographical disconnection gap. Except the humid heat, it was still a nice outdoor dance event. Between the band and the audience chairs, there were some space that made swing dancing possible. At each band break, there was an short introduction class on swing dancing. Not many people jump in to learn. Perhaps for those who has never danced before, it can embarrass them on a busy street? Perhaps this short class was mostly taught in English, which might scare away some people?

I began to use Cantonese to talk to strangers on what swing dancing is. I also met a few more people who can speak Cantonese and are beginner to swing dancing. I feel more connected to where I am. At that moment, I had an urge to spread the swing culture to local people, but I also understood that I did not stay in Hong Kong for long.

The day before I flew back to the US, I went to the Wednesday swing for one more time, bidding farewell to people that I got acquainted with (like, adding people on Facebook). The trip left me thinking on how to make an international scene grow. I believe that swing dancing can be a lot of fun, especially for people who are interested in dancing in other types (ballroom and street dances seem more recognizable in Hong Kong).
Posted by johnayuen at 1:56 PM