May 7-8, 2016 Ontario Orienteering Championship (short summary: a lot of fun, but not good runs)

(I started to write this a week after this orienteering event, but other matters made this unfinished. After a month, I just wanted to finish this without giving too much thoughts...)

One day, Jan from Czech Republic said hi to me, asking if I am interested in the Ontario Orienteering Championship in early May. Jan once helped me a lot in maintaining the new university orienteering club in the University of Illinois, but he left two years ago after his exchange ended. Before we parted, we went to Florida for a fun trip and did an orienteering there. We learned that in Florida, off-trail choices could be scary, since we met numerous snakes. Jan even met an alligator before.

Now, he stayed in Toronto, asking me if I could visit him. Yes. The drive was long (10 hours one-way), but from my spying of Ontario maps, I would enjoy navigating through this area. He even told me that Canadian dollars were very cheap now. Thus, I participated this orienteering championship and the road trip.

(Side note: he showed me a Toronto park map that he set the course with and asked me opinions on route choices. The map looks nice as a city park!)

On May 6 (Fri), I rented a car for this long road trip, stayed at a friend's place in Michigan for a night, crossed the Canadian border the next day, and arrived at University of Waterloo area.

One and a half hour before the first orienteering event, I felt very hungry in the car. Thus, I went to the rest area for a burger meal. It filled up my stomach, but I made a big mistake for not drinking enough water.

When I got to the race venue, my start was within 30 minutes. While I managed to carry basic items for orienteering (plus the GoPro camera), I did not realize the need of water before the race. Before starting, I was excited to see a new map. When I actually got started and saw the map, I was still happy that I went to the right place to challenge my orienteering skills: 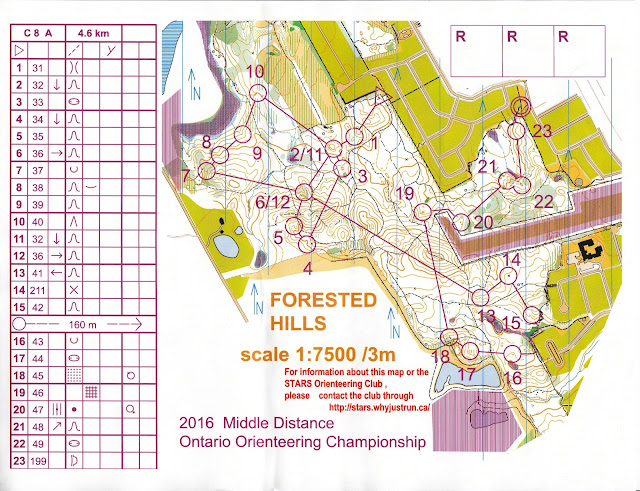 The map has a lot of contours to play with. The small map makes this a great middle-distance orienteering location, where the test of navigation skills is the focus.

Unfortunately, I felt the roughness of navigation at the beginning. To #1, I could not navigate at the correct angle, and needed the trail to reorient my direction. To #4, I made the wrong trail choice. To #5, my angle of attack deviated again. To #6, I walked back and forth to find the right gully (re-entrant).

After finding #6, my mouth started to get very dry. I started to feel that I just wanted to survive in the course, and started walking. Then, controls were not too difficult to find, but I lost the competitiveness.

Still, I overshot at #16, climbed to the highest point when going to #19 (I thought of using the ridge to reduce the climb), and to the finish, I was attracted to the wrong control next to the apartments.

To show that I did not totally rely on my GPS watch to recall my route, I drew on the blank map first. Then, I overlaid the GPS data on the map: 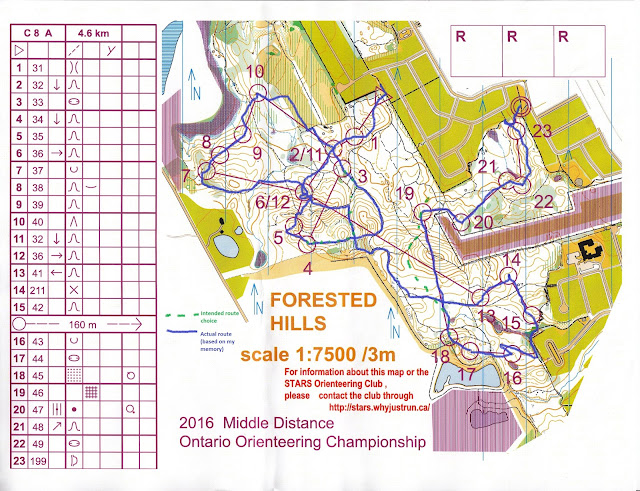 Here is the GPS data. I think I forgot how I went from 12 to 13, thus I made such mistake on my hand-drawn route. 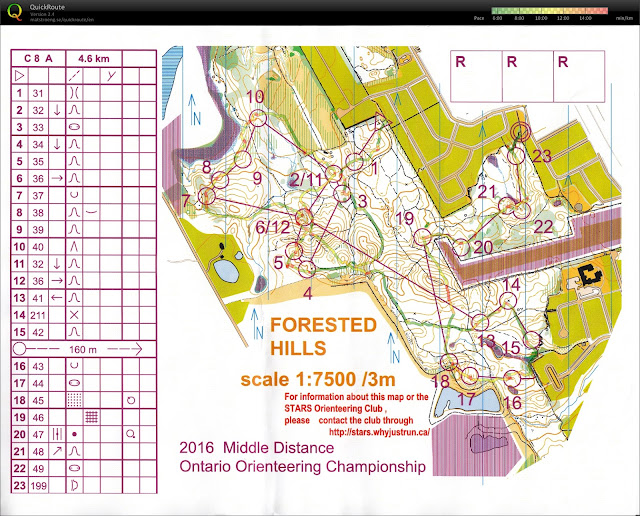 The result was not worth mentioning... 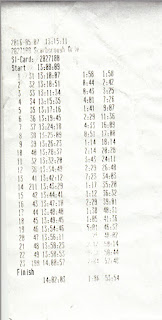 Below is the video:

I was the first to start. Still, I had some time to prepare because there was a 20-min delay in start times. Before starting, I took a picture with Jan. 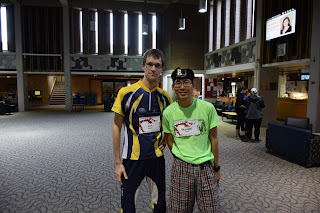 This time, I was well hydrated, and I could run as fast as possible. When I got started, I found a troublesome leg for Control #1-#2: 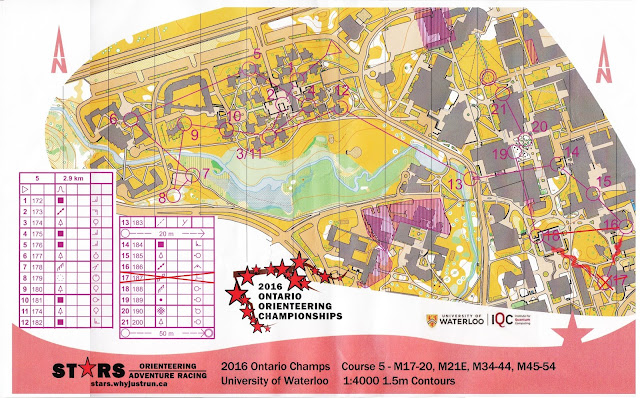 This is probably the hardest leg of the race. Finding the shortest route to #2 took time. I overshot when going from #3-#4. I thought even if I overshot one block, at least the second block should have an entrance to pass through. However, the second block was not passable. I think there is a mapping error there.

After #4, things went smoother. I could find the best routes without much of the problem. There were still detours from point to point, but the choices are just either go right or left.

I did find this sprint was fun.

Here is my hand drawn route: 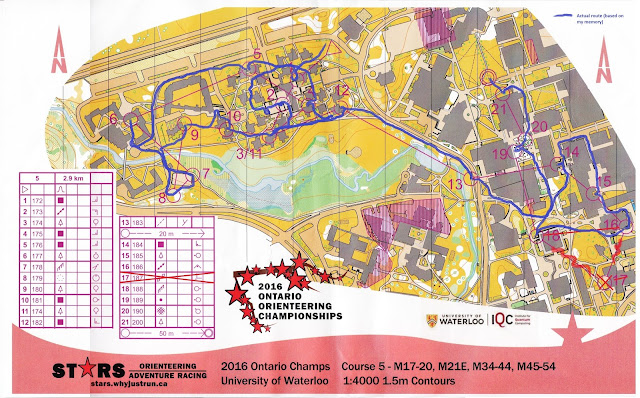 ...and here is my GPS record. I think they virtually match exactly. 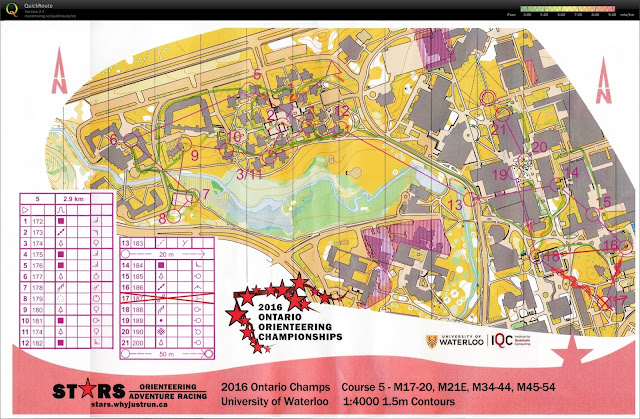 The fastest person finished in 16 minutes, though. 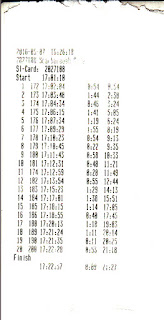 Here is the video on the sprint:

After the sprint, Jan guided me to his home in Toronto. He showed me an area that I had never been. We got some good food, and I could stay at his place for a night.

Seeing that I could handle 10 km course last time in Cincinnati, I decided to take the M21 course, which is ~11 km long. The map, Mono Cliff, is at ~1 hour north of Toronto. I had an impression that maps in Canada are fun (read: complicated) to navigate. I hope I should at least enjoy the map.

At the start, we once again took a picture together. This time, the start was delayed for >40 minutes because course vetters came back late. 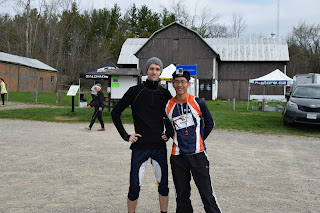 Here is the map. It was not as complicated as I thought. Still, at some local areas, there were still some navigational challenges. The course seems to have many short legs in the complicated area, and then one long leg to go to a new area. 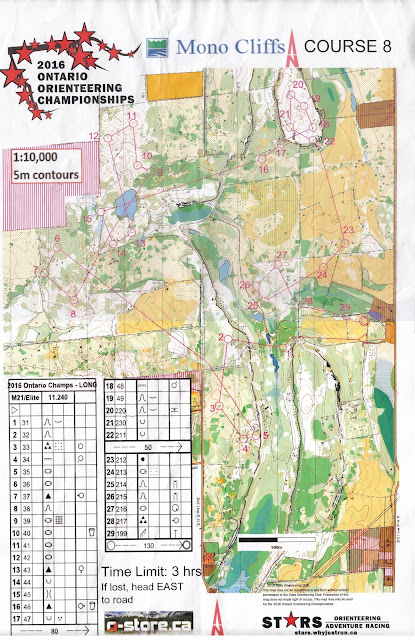 It was a good warm-up to Control #1. When going to Control #2, a girl asked me what to do if the control punch did not beep. I told her to use the spare mechanical punch and report the faulty control after completing the course. Then, I moved on.

I feel the first big mistake when going to #6. I was thinking of taking the more direct route through the open land, but I failed to find the path that led to this open land. Thus, I just went for the less desirable plan: run through the trail, but I still needed to climb hills twice to get to #6. Not a good route choice for me.

Then, to #13, I failed to get back to the trail as early as possible, and I failed to see that the path east of the lake is a better route choice.

At #16, I started to feel tired. From that point on, I felt that I could only walk. This set up some of the biggest mistakes happened in later legs.

To #18, there were two cliffs that were so deep that there were ribbons to forbid people to pass through. The hilltop between #17 and #22 is quite an interesting area.

Then, I felt that #23 was truly my first big mistake. Even I could locate the large and shallow depression with a man-made object on the open field, I was lost when I went downhill. It took me a long time to realize that I overshot.

Later, there were a final rounds of short legs, which I thought I navigated through them well just because I walked. In fact, overall, I thought I did fine for those technical short legs. I still had a few smaller mistakes (e.g., when approaching #7, I overshot), but I did not feel fatal.

However, I could not believe that #28 took me so long to find. It was the kind of mistake that I had not made for a while: circling through an area several times, but I still could not find the control. I thought I could use the fence to guide me to the control, but later I found that I went to the wrong fence. I tried to find the right fence, but was not successful. I also tried to use the stream to guide me to the control, but it did not work, either. Finally, I just wanted to overshoot to the open area, so that I could backtrack to #28, and found it. It took me >30 min to find this, which was unacceptable in my standard. If I did this leg again, perhaps I should trust my ability to read contours?

Here is my hand drawn route: 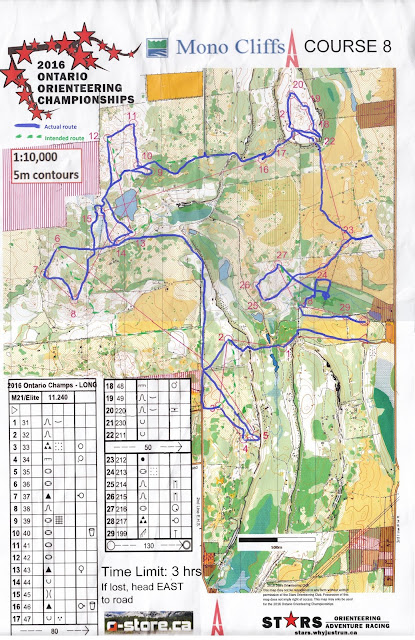 Here is my GPS record: 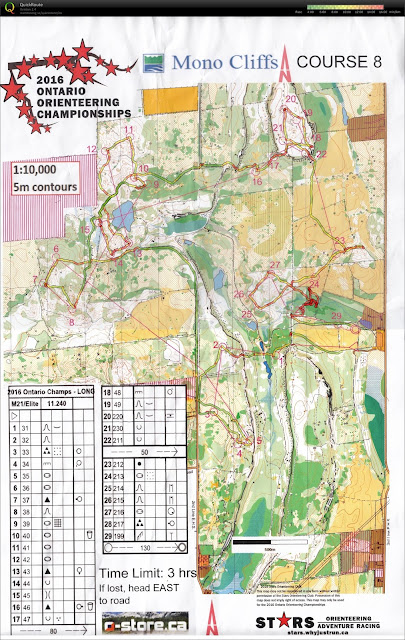 I barely finished within 3 hours. I felt that I could finish this within 2 hr 15 min if I felt well.

Finally, here is the video. If I did not make such big mistakes, I should have the whole course taken.

Despite the negativity of my performance in Toronto area, I still enjoyed the orienteering courses in these three days. The maps, while not as complicated as I thought, still offer enough navigational challenges that I considered fun. I still felt that these 10 hours of long drive were worth of my time.
Posted by johnayuen at 2:52 PM