(Note: as I wrote, I think I no longer just write about the event itself, but out-of-town dancing in general...) 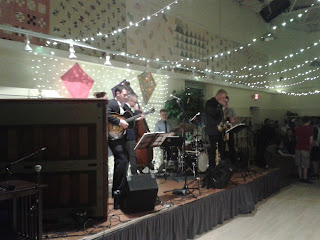 The night before the trip to Ann Arbor, I was busy finding articles on attending lindy exchange. I would like to forward such articles to those who were their first time to attend it. For example, bringing a lot of clothes is important. Getting water and food is important. Moreover, I had to research on the bands that would play in the lindy exchange. In particular, I needed to decide whether I should buy some albums from them. I slept at 2 am that evening.

The next day at 12:30 pm, I picked up Charlie and Vivian and began the journey. Charlie nicely prepared lunch for all of us. It was a different road trip than my previous road trips with other people, since the trip made me feel young again. We played many car games, stopped at a piggy ice cream place at Michigan border, slowed by the traffic due to a multi-car accident on I-94, and finally arrived at the dance place in Ann Arbor an hour later than we expected.

Then, just like any other lindy exchanges, you dance with a band till midnight, and continue blues dancing till the sun is almost out. Then, repeat on Saturday or Sunday. I would like to add that I really like the band on the Friday night (Chelsea Reed, from Philly), and I did buy a few albums for collection and swing band support. Moreover, the river dance on Sunday was cancelled because of the storm. There were unofficial river dance later in the afternoon, but I only knew about this after we got back to Illinois. The rest of this report is just a few thoughts appeared during this lindy exchange:

After running several half and full marathons, I found that dancing the entire weekend gave me a similar feeling of running long distance. Now, if I feel tired during the dance, I sit out for a couple of dances. Volunteering to prepare food and guard the door helped me to stay away from the obligation of dancing for a while. In a marathon, one has to gauge his/her speed constantly. If I run too fast, I need to remind myself to slow down. Dancing the whole weekend is similar, in that dancing too much will cause a dancer to feel tired and pain. Surprisingly, in this lindy exchange, I could stay in late night dances longer. In the past, I would skip the late night as much as possible.

The analogy can also be extended to runner's blue. In Haruki Murakami's book "What I Talk About When I Talk About Running", he mentioned that he had a runner's blue after a marathon, which caused him to stop running for a long time. He did not know why it happened, although he could speculate a few things. I think I experienced such runner's blue after the race also. I have not run for months after the marathon in April. This lindy exchange gave me a similar feeling. I just feel that I do not want to dance for a while. Probably I would not stop dancing for months, but I did feel the lack of motivation to dance in the next few days. On the way back to Illinois, there is Vivian who wants to make me happy. While I really need to be grateful about this, there seems to be something chronic happening, and I think dancer's blue is part of the reasons.

Asking people to dance in a lindy exchange event still tests my human decency. Perhaps I was trained in the first day of dancing that rejecting a dance improperly hurts people emotionally, I felt extremely irritated if a person consistently rejects a dance without a reason. The word "snob" came into my mind quite frequently if this happens, and I do have a mental blacklist that not only I will stay away with this dancer, but also tell other beginners to stay away as a warning. Unfortunately, the concept of a snob was experienced first in a swing scene, which seems to happen a lot in my region. Thus, asking people to dance is not my strength now because of the fear of rejection.

Still, sometimes I hope that it is wrong to assume "elite dancers = snobbish dancers". Thus, I sometimes still intentionally walked to an elite circle and asked someone that I trust to dance. When they said yes, the experience was amazing. Now, when I dance with a person, I can feel his/her level. Sometimes, I feel a bit regretful that I cannot harness the potential of an advanced follow, a kind of feeling that I lead something too basic to them. (Actually, recognizing that I do not know enough can be a good thing. Some people feel that they already know a lot on a topic, but actually are not.)

Conversely, when I dance with someone who shows signs of inexperience, the instinct of a perceived bad dance will come up, and I need some way to suppress it, since I do not want to be that snob. There needs to be a way to learn from the beginner so that I would be happy to dance with anyone. My experience with salsa told me that I should challenge myself the following way: lead the simplest moves such that even the true beginners will know what the lead movement leads them to do. I still feel that I do not know a lot of stuff about lindy, and leading properly in lindy is still a challenge for me.

Ann Arbor And Its Art Fair

There is no need to be nostalgic with Ann Arbor. Somehow, after the graduation in Ann Arbor, I still have opportunities to come back for various reasons. In particular, my last trip through Ann Arbor was two months ago. Nothing much is changed in such short window of time.

A happy change in the last few years is that Ann Arbor has its bikeshare stations: 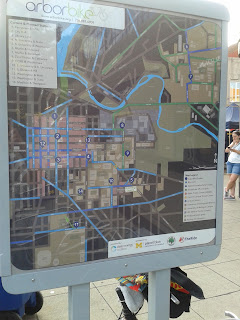 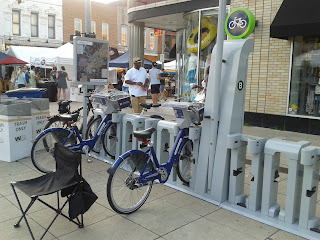 Then, KissMe Ann Arbor overlapped with Ann Arbor Art Fair. From my faint memory, the Art Fair happened in the north side of the Central Campus. However, my memory may be wrong, since the Art Fair covers much larger area than I thought: 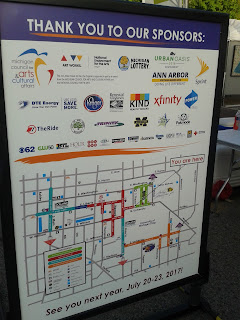 Charlie and I have lived in Ann Arbor before, so we gave a tour to Vivian, including the quietest study places in Central Campus and told her about the "M" that she might be fine to step on. We went to Pinball Petes that I still remember, but we also went to Stucchi's ice cream that I forget.

Most of the art stalls sold typical art stuff. There were still a few that attracted me to stare longer.

There are rings for geography: 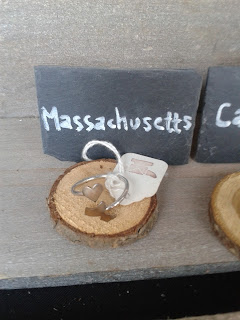 There are piggy banks: 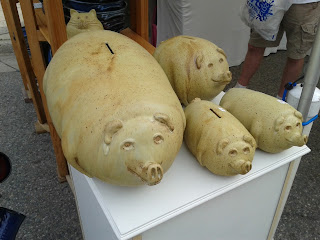 And Sulley. Monster Inc. is still the best Pixar animation in my mind. I really like this guy that usually has a good heart. 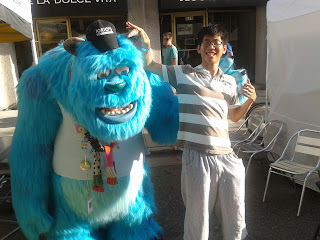 I would like to thank Kenny to host most of our UIUC folks for these two nights. He is also one of the organizers and MCs of this lindy exchange. He did an amazing job!
Posted by johnayuen at 1:16 AM