One morning, I received an email saying that I got a job interview in Hong Kong. While I was excited, I knew I might need to spend a lot of money to come back, since I had to buy tickets at the last minute, and end of May was probably considered as high season for air tickets (some students still need to travel back home after the end of an academic year). Upon the initial search online from kayak.com, I found a ticket that costs only USD 1,000 from SWISS, which looked quite inexpensive to me. However, the route included the first flight to Zurich for 8 hours, having a long layover, and then another 11 hours of flight to Hong Kong. I checked with my frequently-used travel agent in Detroit on conventional flight routes (i.e., direct flight to Hong Kong, 14 hours, by Cathay Pacific or United Airlines), and none of them were <USD 1,000. Since (A) I had never been to Europe before, (B) a connection in Europe is even cheaper, and (C) the layover is all in the daytime, I thought it would be a good idea to make a one-day trip in another continent. I know that my passport does not need a visa to visit most (if not all) countries in Europe, so this one-day trip can work out.

Thus, I confirmed the ticket. My plane left Chicago at 2:45 pm (local time), arriving at Zurich, Switzerland at 6:40 am the next day, having some fun in Zurich until the second flight that left at 10:45 pm, and arriving in Hong Kong at 4:30 pm the day after.

When the flight descended to Zurich, it was overcast, but snow-capped mountains could still be seen. I thought: with the lakes around this area, this looks like Seattle in the U.S (or Vancouver in Canada). 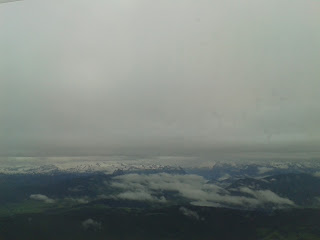 After the arrival, I had to cross the immigration check. I found that people with passports from European Union have a special line for them. After half an hour of queuing, I walked through the baggage claim, with nothing to claim, since my checked baggage could go through Switzerland to Hong Kong. I only had a backpack for these 16 hours.

Public transport is across the airport. There is a travel info center, where I could buy a one-day Zurich card. It costs CHF 24 (I could pay USD 26), and it can be used to travel to Zurich downtown, and one fare zone surrounding it, without additional cost. The airport itself is one fare zone from downtown. Moreover, it could be used for museum entry, which is mostly free, while some has discounts. Sadly, I went there on Monday, when most of the museums were closed. I still used the card to travel around a lot, though.

The train only took two stops to go from the airport to downtown, which is the train station. Some of the platforms are on the ground, while others are underground. Most of the times, buying the ticket is under honor system. I did not encounter anyone checking the tickets at all. However, according to Wikitravel, the penalty is heavy if you are found that you do not have the ticket.

Next to the station, there is the Swiss National Museum that I hoped to visit, but it is closed on Monday. Thus, I walked along the river to examine the city layout. Zurich is the largest city in Switzerland. Yet, the city did not look big to me. It is difficult to find buildings that have more than 10 floors. Perhaps this is how people live in Europe.

After playing with Duolingo for two years, I think I had the ability to guess the texts in Spanish and French. I did not get to German, which was what I needed here. In this trip, I could still decipher some words in German, like Bahn=train, Bahnhof= train station, and Bahnhofstrasse (the main street in Zurich) = Station Street. "Bahn" is everywhere in Zurich. On the ground level, there are many streetcars (trams) that are also called Bahn. It was a delight for me to figure out what train to take.

My first plan was to go to a hill called Uetilburg. There is a train going there, from an elevation of ~400 m in the city to ~ 800 m at the last stop. From the stop, one may continue to hike up to a hotel with an observation tower. There were also several hiking trails. One could already find a great view of Zurich city and the large Lake Zurich from the top. Farther away, the snow-capped Swiss Alps could be seen. 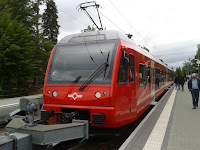 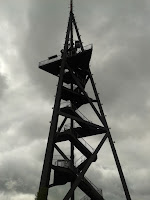 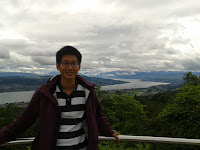 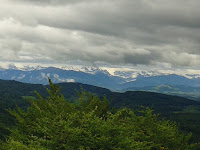 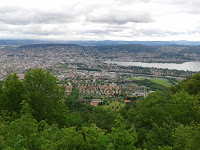 I went for a short hike to find a geocache. The trails nearby were pretty steep, but guardrails and chains were there to protect people from falling. It seems to me that there would be a lot of fun to hike in Switzerland!

On the way back, I went to a bakery to buy and try a pastry. I did not eat it until in the evening. It costs ~ CHF 3-4. When I was at the airport, I went to Starbucks to see the price of a mocha. It was almost twice the price in the U.S. Later, when I checked the prices in Burger King at the train station, the same pattern of twice the U.S. price was also observed.

I saw several grocery stores called Coop - at the airport, at the train station, and on Bahnhofstrasse. Some of them looked like a supermarket (grocery stores much smaller than Walmart). Another one looked like a to-go food court, selling only food for lunch. The one on Bahnhofstrasse is like a department store (like Macy's), selling all kinds of clothes and having a food court on the top floor. I got a lunch there, seeing that I could use the restroom there. Most of the public restrooms (WCs) need CHF coins to use, which I did not have. Just ordering half rice and half meatballs with sauce, it already cost CHF 10. Yes, the price in Zurich was like doubling the U.S. price for everything.

After lunch, I checked the price of chocolate at this Coop basement. Some of the cheaper ones were ~CHF 2-3, while those in boxes could go up to CHF 10-15. What makes them so different?

In the afternoon, I went to the river and took a river and lake cruise. Zurich card covered the cost. I felt that I wanted to sleep, but I could still see the river and Lake Zurich when I tried to keep my eyes open. 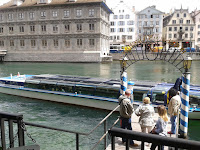 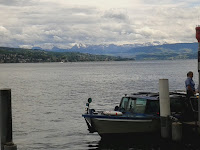 There were several ferry lines on Lake Zurich. The fares are like the trains, which depends on number of fare zones crossed. On the lake, I could find the familiar mallards, but there are some ducks that I had never seen, and big white birds that are probably swans. 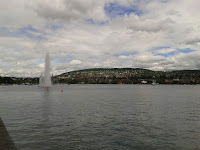 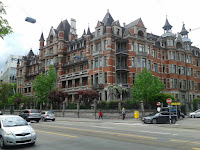 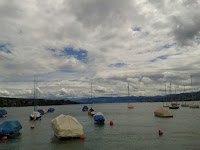 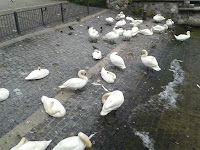 I was tired and my brain was not functioning. I found a large building with historical architecture. Thinking it must be a museum, I went in and being asked what I was doing. After several back-and-forth responses, I found that I was actually in an office building!

I walked back to the downtown area, where a large part is the historical Altstadt (Old Town). There are several churches in this area that are worth visiting (e.g., St. Peter's, Fraumünster, and Grossmünster). They looked huge and old.


I walked through the narrow streets that only allow pedestrians. 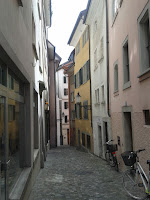 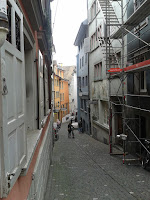 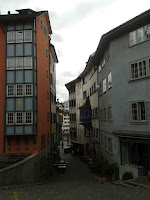 There is a cable incline train (Polybahn) that moves people to an university area. 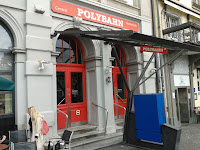 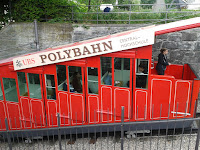 At this point, I found that I had not seen places for charging phone battery for a long time. Before even getting to the issue that the plug in Switzerland is different from the U.S., I found that a lot of public places do not have power outlets at all. I saw the first power outlet later in the afternoon (like 3 pm). Yes, it did not matter, since I did not have an adapter. I did not see any USB charger throughout the Zurich trip. This is good to take note of if I come to Switzerland again and use the phone often.

There is also a challenge in using free Wifi outdoors. In Zurich, to use free Wifi, one needs to provide the phone number, but visitors outside Switzerland do not have one. In this trip, I only found that Starbucks has a way to get around the phone number, and only had internet access in Zurich when I was near Starbucks.

I was happy to visit one Swiss gift shop that has many creative toys. The manual music box that can be customized is one of them. I think each of these products is also an art. 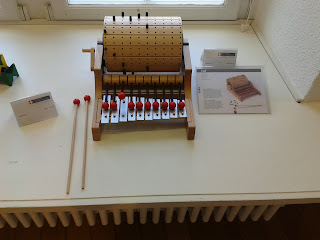 I walked up the small hill of Altstadt called Lindenhof, which provides another view of Zurich. I saw several people playing chess outside. 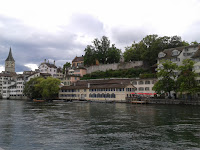 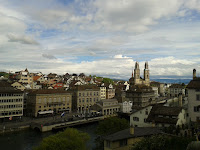 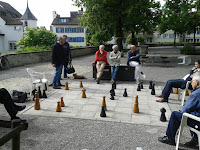 This is the transportation hub of everything in Zurich. Long-distance, international trains can be found on the ground floor. 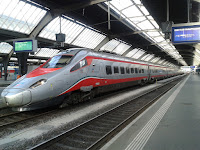 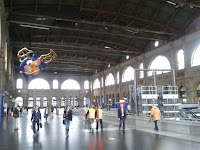 Below the ground floor, there are many underground shops. I peeked the Asian restaurants to see if there are any differences in interpreting Asian food between the U.S. and Switzerland. I was not sure. This place looked like Panda Express in the U.S., but the food served seems different to American Chinese. 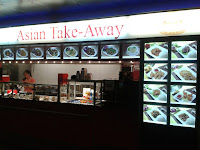 One more floor below, there are many regional trains. Many goes to suburbs of Zurich, and some goes out of Zurich (e.g., S-Bahn).

Back to the airport

It was 8 pm. I should buy some chocolate before heading to the airport. When I went to the Coop department store, there was already a guard gesturing that the shop was closed. Argh! I forgot from the travel guide that Swiss people close shops early. Thus, I caught a tram back to the main station, knowing that shops there are the exception of closing at 8 pm.

After buying a few package of chocolate in a supermarket called Migros, I got on this train back to the airport. 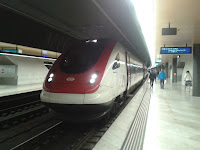 It is interesting to find that at the airport, I went through first round of passport control and baggage scanning, walking through several terminals, and getting another passport control again. I guess this is how Switzerland deals with local and international flights in one airport.

It was rare for me to sleep at least 4-5 hours on the plane before waking up. The night I got back to Hong Kong, I had a wonderful sleep. It seems that having a day trip in Europe helps overcoming jet lag!

(This later proves untrue, since I did not sleep that well in the next few nights)

I still feel that if the air ticket that makes a stop in Europe is as expensive as a direct flight, I may consider doing such bonus trip again. Perhaps I would allow myself staying there for one more day.

Concerning Switzerland, I sense that the best of the fun would be outside Zurich. Upon some research, in about 2 hours of train from Zurich, I can get very close to the lakes and Swiss Alps.

Posted by johnayuen at 5:54 PM

Email ThisBlogThis!Share to TwitterShare to FacebookShare to Pinterest
Labels: Travel