Flying Pig Orienteering Championship is an annual national orienteering event in Cincinnati, OH area. This year, I signed up all three races. Friday was a sprint course, which is supposed to be short and quick. For M21 (i.e., men open), Friday course was only 3.1 km. Both Saturday and Sunday courses were classic (or long). I usually signed up for a course one level lower than M21, since I felt long courses were too long for me. This year, however, I signed up M21 long courses for both days. Both of them were almost 10 km long.

On Friday, I drove almost 4 hours to the Friday sprint event. Few months ago, I learned that I can borrow GoPro headcam from the university library. Thus, I borrowed one to take video record.

I was in a rush when I got to the event center. I was already late, and the start was going to close soon. I did manage to put my GoPro camera and get the approval from the organizer. However, I was unfamiliar with the headcam. I pressed the button to take a picture instead of taking the video. Thus, I did not have a video record for the sprint, which is reasonably short enough for watching.

Nevertheless, I had the GPS watch record. There was not much to say about this course. Most of the navigation was easy. Controls #6-#15 were quite fun to go through, since this forested area has a lot of man-made trenches. 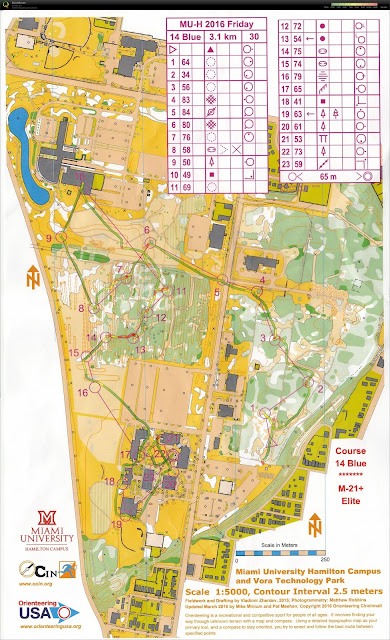 I did take a video of the campus area, where the last few controls were located:

On Saturday morning on the charter bus that brought competitors to the start, I met Rob Minto from ICO. Rob has the whole family coming for orienteering, and we meet often when there is an orienteering event in Indiana. Rob told me that this was the best map in Cincinnati area. Before this competition, I found this map online to get an overall idea of the terrain. It gave me a typical feeling of re-entrant (gully) system. It is hilly, but navigation should not be difficult. Yet, Rob said, "you will see". 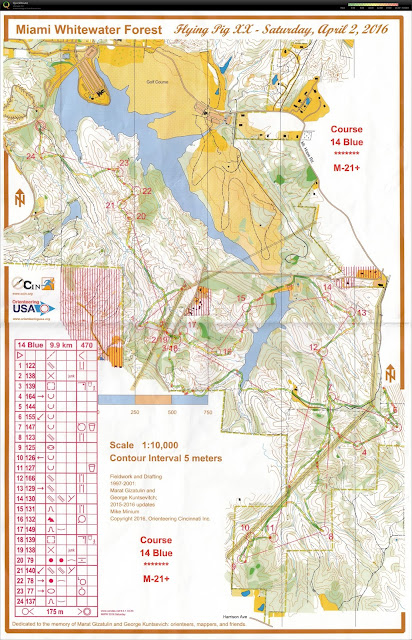 I also have a video of the course. However, the battery of the headcam lasted only ~1:30:00. I only had a video up to Control #19. The video with the route can be found in this link.

I struggled at the beginning. At the start, it took me 10-20 seconds to find the start triangle. Since there were 3 paths at the start, I could not walk until I found where I was. Then, the long leg to Control #4 , and then Control #5, were terrible. I thought I went east, but I actually went south and got out of the map. After this 90 degree mistake, I tried to take the safe route for this leg. Then, towards Control #5, I tried to aim off to the south to find the re-entrant and then went north. However, I had compass problem again. I still went too far north, hitting Control #6 first and did not realize that at first. I would even say this was a parallel error because I did hit a re-entrant, but it was the one north of what I needed to find.

After Control #5, however, I felt that I was in control of the course. Even though the decision was not perfect, I executed the route that I planned.

To Control #9, I already planned beforehand that I would rather run a more indirect route to reduce climb and reduce navigation uncertainty (red line). However, after the race, I was convinced that I could do one more climb with moderate uncertainty in navigation, while increasing the directness of the route (blue line). Some people did take the most direct route and climbed hills three times. 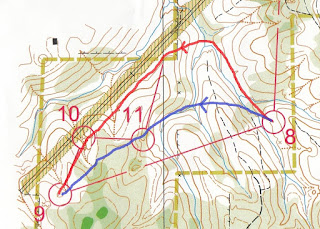 At Control #9, Maricel from CAOC caught up on me. He is one of the fastest orienteer in that club, and he started 16 minutes later than me. I hope I would not see him early, but I know this is difficult for me to avoid. He pointed me the location of the depression for Control #9, then he ran away. I knew my way to Control #10, since I saw Control #10 first. Then, I saw that Maricel did not run to my direction. When I went to Control #11, I saw him again. From the direction he ran, he clearly missed #10. I told him, with some reservation, "you missed the last control!" However, he did not hear me and ran away. Perhaps he knew what he was doing, so I did not yell at him any further. After all, I should probably not help if I was serious to the competition.

This course has several long legs. Besides the miserable Control #4, Control #8, #12, and #20 were also long. I tried to be safe when tackling long legs.

I thought Control #20 was fun enough (later found that using the trail east of the stream was a better choice than running along the stream), but the next three controls reminded me what Rob said. The terrain at these three controls is complicated, making me excited!

After the completion of the course, I looked forward to the competition the day after. I also checked the result, and found that Maricel did miss a control - the one that I yelled at him. Even though his time was the fastest, his result was invalid due to mis-punch.

On Sunday, I thought I had a charged GoPro camera because I charged it the night before. However, before starting the Sunday course, I found the headcam was out of battery. Did it turn on by itself due to internal impact? Anyway, I did not have the video for this course. Look like I should double check the battery of the headcam next time.

More fun navigation happened today. After the run, I found out I made a lot of decision errors. I was aware of the options, but I still chose the wrong one. I also felt that this course was more on navigation than route choice. 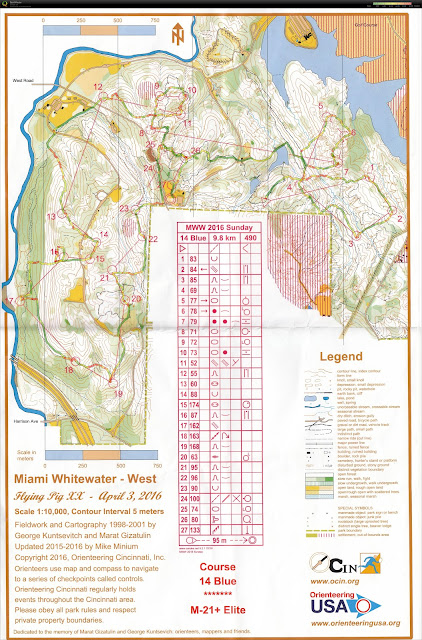 There were still some route choice problems (e.g., Control #1, #8, and #12). I made bad choices on all three. For #8 and #12, I had thought about using roads -- longer distance but can do mindless running. However, I also thought that I would not run fast anyways. Why not taking a more direct route. After checking other people's route, I realized that I was wrong. Using roads were definitely faster.

The start was tricky. The best way to see the right route is not to run immediately, since the best choice was to leave the starting trail immediately. I was tricked at the start. 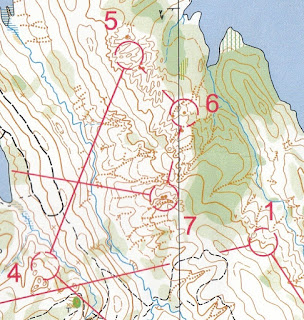 Then, there was an area with complicated terrain that we needed to visit twice: at the early half and at the end. 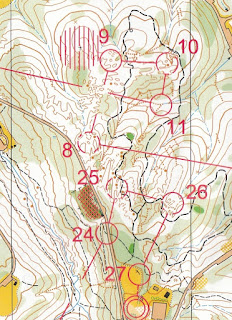 I did not quite know why I did not see control #16. I could not think of a better way to ensure a clean run for control #16.

In the later navigation legs, I found that I should take more direct routes to control #22 and #24.

My friend from Toronto invited me to come to his place for an orienteering weekend. In a few weeks, I will do a sprint, a middle, and a long course around that area. Based on a sample map, there will be a lot of fun...

Posted by johnayuen at 5:03 AM