I woke up and walked around this Ming Fai Camp, which is on the top of a small hill. When I was young, I found this place pretty huge. Now, I did not quite remember how the camp looked like. It seemed to me that the building was extended. The interior was definitely furnished differently. 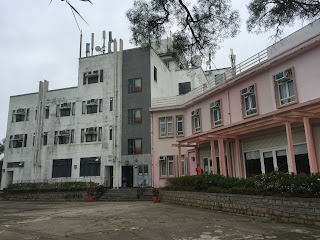 This is the playing field, where the finish of the last night's night-O was located. 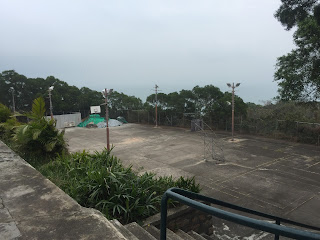 At 7:35 am, I proceeded to the event center of Oi Fai Camp to prepare for the team competition. Look like the organizer will put checkpoints near Ming Fai Camp, so all participants need to leave the Ming Fai Camp area by 8 am. 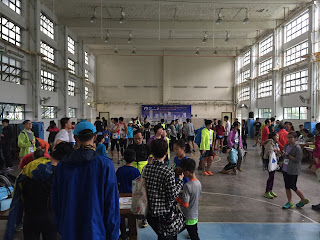 He said there was a overall performance prize that combined the result from the night-score-O last night and the team competition today. He would help me to finish the race without disqualification to get this prize. Why does a qualified result is enough? There were only 2 teams, including our team, in the ME (male elite) group. 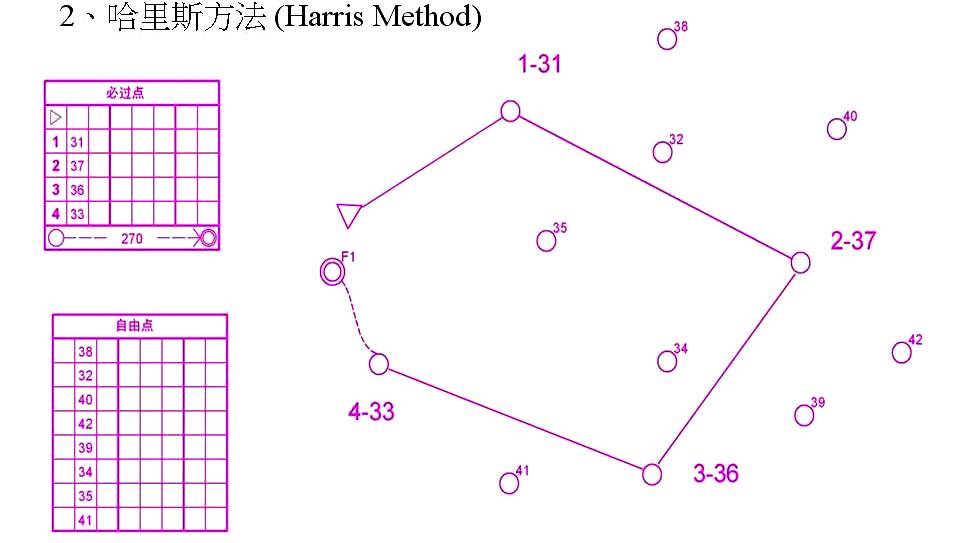 Before the race started, the race officials explained the rundown of the competition, especially on what participants had to do when they finished their course segments. 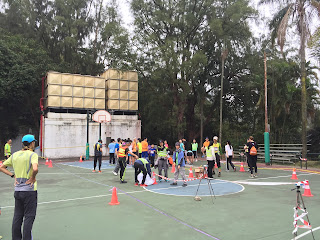 The race was a mass start for all teams. Teams of different groups got different maps. 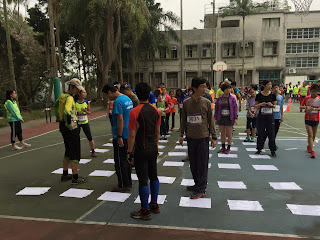 Teammate #1 was ready to go: 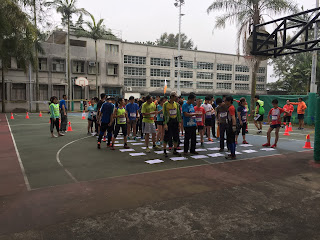 After my partner left, I waited in a designated area. I knew that for the ME course, each relay segment is ~ 2.3 km. I bet top finishers could finish such segment in 15-20 minutes. However, after 30 minutes, my partner still had not come back. Around this time, the other team already passed through a spectator checkpoint (a checkpoint meant for the partner to know his/her course is almost done), and finished the course segment 5 minutes after.

Fortunately, I saw my partner passing through the spectator checkpoint right after that. He later told me a mistake that cost him a lot of time.

When he finished the course, I could start with the following map: 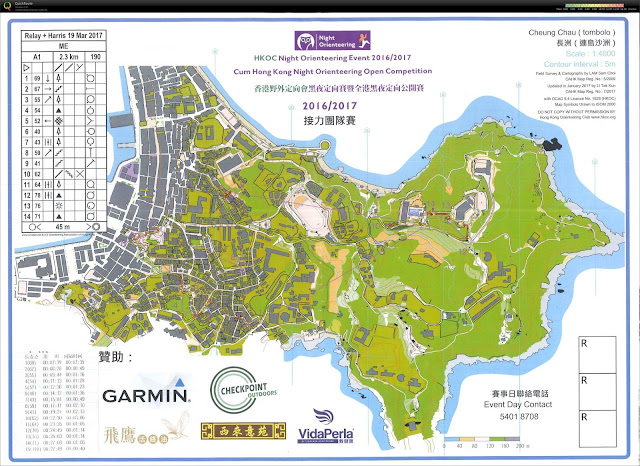 The course was focused on the village south of the island. Although those alleyways can be confusing, I found pretty smooth in visiting the checkpoints within this area. I could plan 2-3 checkpoints ahead, so when I reached a checkpoint, I immediately knew which way to exit. The only concern was the dogs around, where I switched from running to walking.

After passing through the spectator checkpoint (#11), there were a few more checkpoints at Ming Fai Camp. They were not too difficult, but it was quite a bit of uphill and downhill. When I finished my segment, it took me ~ 23 minutes. I felt pretty good because I did not feel like I made any major mistakes (i.e. getting disoriented). 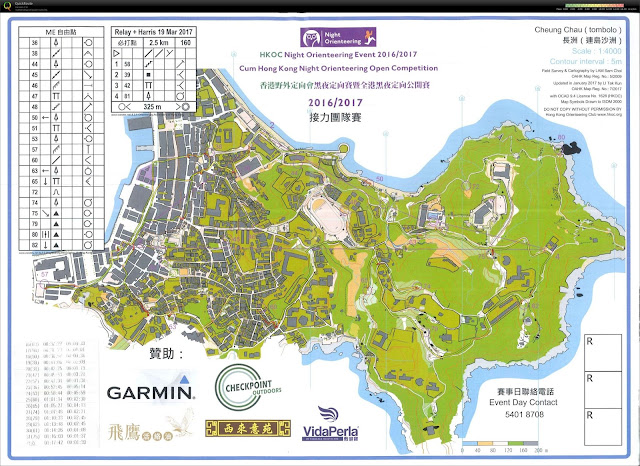 The final plan was the following:

We distributed the checkpoints based on the shortest two paths that traveled between compulsory checkpoints. For example, #50 went to the beach, while #48-47-44 went into the interior. This increased the planning time, but the resulting route will be more optimal.

The execution of the plan was fine. However, when I visited #57, I kept feeling that I might have missed a checkpoint. I walked and read the map, double checking whether I missed any checkpoints on my side. Then, I found that I punched #38, not #36. My mind must have mixed up, convincing myself to get my partner's checkpoint. To not get disqualified, I wasted 7-8 minutes of time to run back to #36, and then returned to #53. It was a long way back and forth.

I could handle the rest of the course. I just felt sorry that I almost ignored a checkpoint that I had to punch.

As expected, when I got back to the finish, my partner waited for me. The time when the slower person punches the finish is counted as the finish time. After finish, he told me that he waited about 5 minutes for me. I told him the mishap.

At the event center, our team found that the other ME team was disqualified because they did not punch #57 and #80. Thus, if we punch all the checkpoints properly, we win. 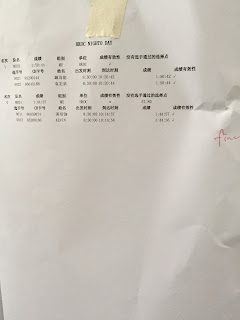 Thus, our team won because there were only two teams competing and because we were more careful in completing the course. My partner told me that when I got back to finish for the relay, the other team just passed through the spectator checkpoint. This may make them plan the Harris section in a rush and overlook some checkpoints on the map. My partner was even concerned if I punched all the checkpoints in my relay, since I came back so fast.

We got the skincare product, again for me. 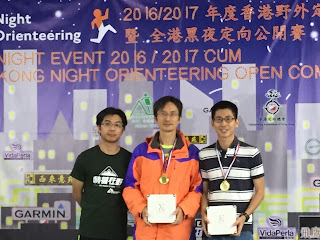 There was also an overall performance award that was based on the combined results of the night-score-O and the relay-Harris-O. I, who particpated in both races and got placed, got the first place for the overall performance award. The prize was a Garmin Forerunner 630 GPS watch. This is a high-end GPS watch, and I like it, but I had my current Garmin GPS watch only a year ago. I probably will sell it to someone who needs such high-end GPS watch (note: I already have a potential buyer). 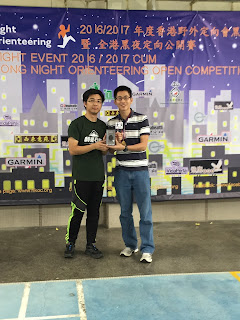 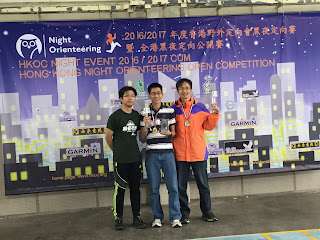 After the award ceremony, the rain got heavier outside. Nevertheless, my partner and I had lunch in the village center. I also bought some dessert, before leaving the island.

Back home, I had to take care of the awards: medals x3, skincare products x2, GPS watch x1, trophy x1, plus another trophy cup that will have my name engraved. I have never got so many awards in an orienteering event before! 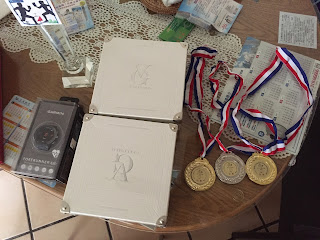 This made me wonder: where were the true elites. I only saw a few familiar faces, and several of them were not in the elite group. I treat the awards that I got as participation awards.