(Note: this is Part 1 of the orienteering report for Cheung Chau. Part 2 is here.) 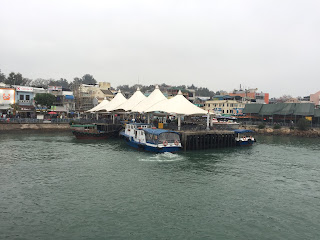 Cheung Chau brought me back a lot of childhood memories. When I was a kid, my parents often brought me to day camps or night camps here. I swam at the beaches there, and Cheung Po Tsai Cave always brought me excitement to walk into.

In a geography class during secondary school, the teacher talked about Cheung Chau as a tombolo -- an island formed by connecting two islands by a deposited sand bar. The natural deposition results in a dumbbell-shaped island.

Since I went to the US for my study, I had only been to this island once, and that was ~7 years ago. When I started being more serious about orienteering in these years in the US (at a point that I started a college club), I talked to Jan, a Czech guy, about the orienteering map of Cheung Chau and how nice a sprint orienteering place it can be.

Last week, I got an opportunity to run on this map. There were a night orienteering (night-O) on Saturday and a team orienteering on Sunday. Like many other orienteering races in Hong Kong, one needs to register a few weeks ago in order to participate.

On Saturday at 4:15 pm, I took the slow ferry to Cheung Chau, which takes about an hour (the fast ferry takes about 30 minutes).


The event center was where the childhood memory kicked in: Oi Fai Camp. which is at the middle of a small hill. Ming Fai Camp, which was where I would get a sleep, is located on the top of the same hill. The two camps are connected by a long stairway. It took about 20 minutes to walk to these camps from the ferry pier.

On the way, there were many lover's locks that looked like recent world phenomenon -- in many places around the world, someone likes to open up a space for the existence of locks. 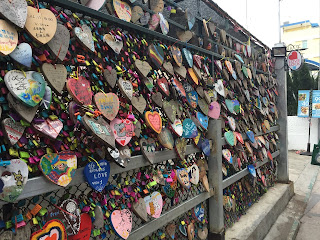 I only came here for a geocache, but the cache was obviously stolen (aka muggled). 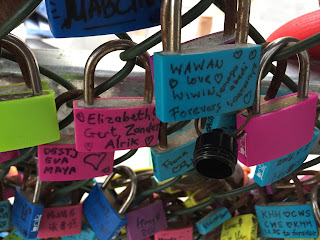 Walking slightly further, there is a famous sushi roll that costs HK$10-$40. I gave it a try, treating it as a pre-race meal. 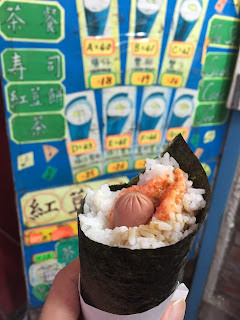 In the event center of Oi Fai Camp, participants were getting ready to start. When I was there, it was already close to 6 pm. Some participants had already started. I would start in the latest group at 6:55 pm. Before starting, I needed to pick up my bib and the e-punch (the Chinahealth punch that works similarly to a SI punch). Then, I had to change my clothes. I found a person with a nickname 40,000 giving beginner clinic to some participants (actually, he gave directions to places most of the time). 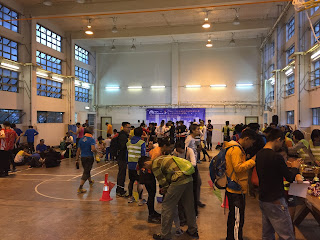 It took about 5-10 minutes to walk to the start. This was a good place to warm up before the run. 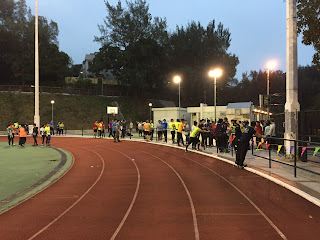 This was a night-score-O. In a score-O, each checkpoint (control) has a fixed point value. One can visit the checkpoints at any order (s)he wants, and one can skip checkpoints. The goal is to get as many points as possible within a time limit. In this race, 90 minutes were given. If two participants have the same points, who reaches the finish first wins. If someone overtimes, there is some kind of penalty. In this race, anyone finishes over 90 minutes would be disqualified.

This race was a mass start in batches. Participants within the same group started at the same time. Here, people were waiting to start. 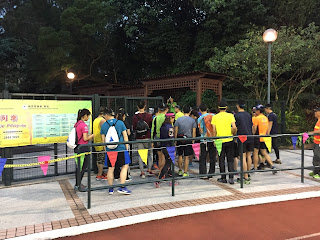 One minute before they start, each participant was given the map, and they could plan how they visited each checkpoint. After a long beep, they could start.


Before start, each person needs to bring a whistle, a compass, a e-punch, a headlamp, and a bib.

The ME group (men elite) map is as follows. My route is also shown. 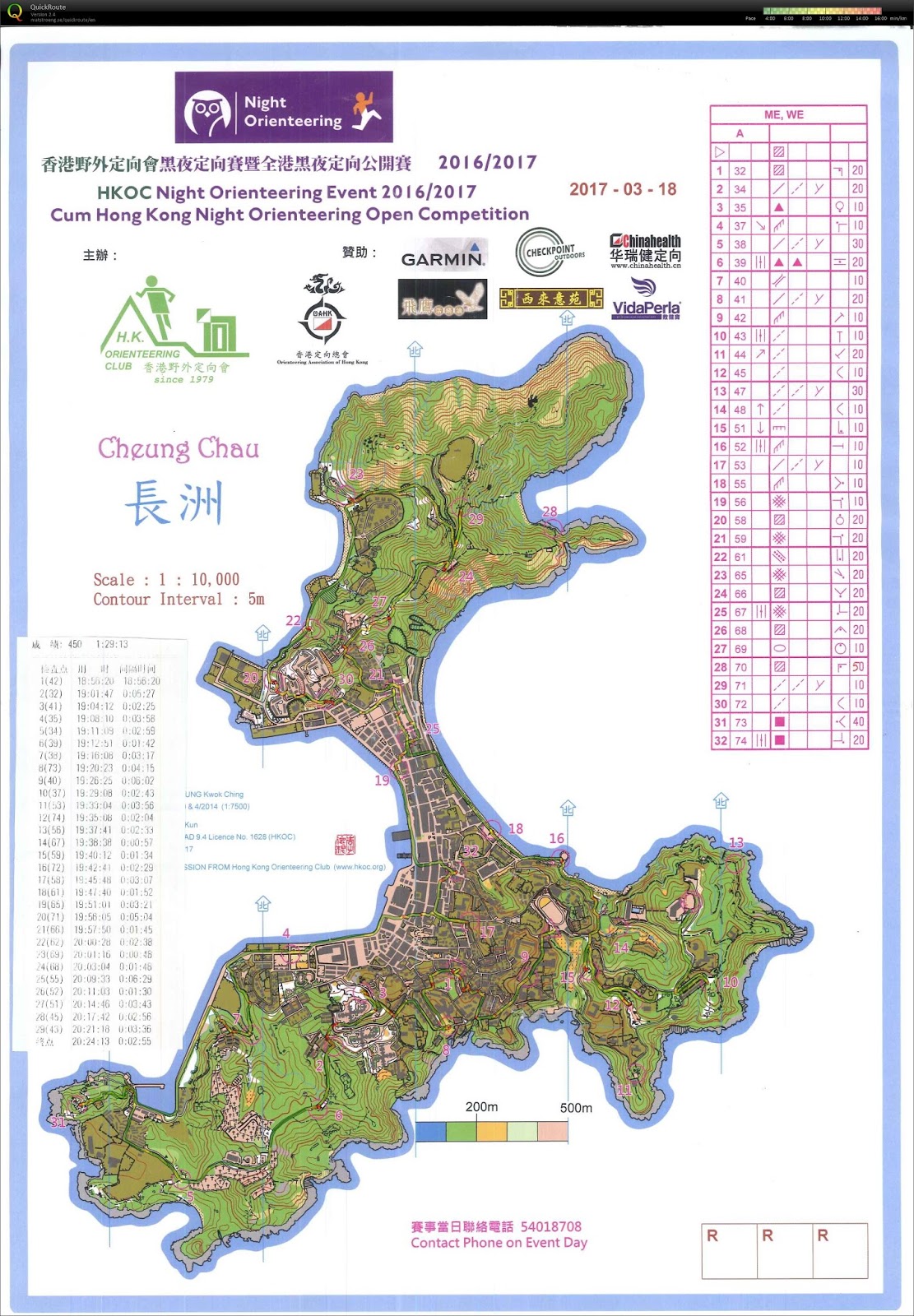 When I first looked at the map, I slowly found where the start (triangle) and the finish (double circle) are. Then, it took me a while to see the distribution of checkpoints. I only had a general approach: sweep the checkpoints on the SW side of the map first. Then, I go to the north if I have time. Finally, I leave some time to find the checkpoints close to the finish.

I was very slow in the first few checkpoints, since I had to adjust with seeing with the headlamp. Moreover, I was still deciding the optimal way to sweep the checkpoints on the SW side. The checkpoints for my earlier stage were located inside confusing alleyways. Thus, I almost stopped at every path junction.

Once I got to checkpoint #3 (35), the order for the rest of the SW checkpoints was pretty much set until checkpoint #4 (37). After leaving the village area, I could run pretty fast. I just needed to pass through a cemetery in the dark.

After #4, slightly more than 30 minutes were passed (i.e. 1/3 of the given time). I did not plan as far ahead, seeing 2 to 3 checkpoints at a time. I was back to the village area, so I had to be careful not to get lost.

For the checkpoints in the north, the order was pretty much set, seeing that I had plenty of time to sweep them. The exception was the 50-point #28 (70). It was far. I needed to go down and climb back with almost 100 m elevation. I also had <30 minutes at that point. Why not just go near the finish and sweep the checkpoints there?

When I reached the SE part of the map, there were only 10 minutes left. I forgot to pick up #14 (48), the one that was close to Oi Fai Camp. Then, I used to remaining to pick up the checkpoints with smaller values. I did not see that the two checkpoints (#11 (44) and #13 (47)) that I did not have time to pick had higher point values.

When passing the finish line at Ming Fai Camp, I had slightly <1 min to spare.

I went back to the event center to print the results, pick up the key for lodging in Ming Fai Camp, and pick up a cup noodle (without a fork), a cake, and a carton of juice for tonight's dinner and tomorrow's breakfast (certainly not enough for me). Then, I looked at the preliminary results. Huh? Nobody got over 400 points? Even when the result was final, there were only 2 people got over 400 points, and I was one of them. 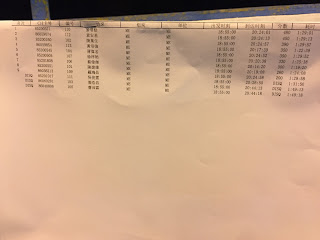 Where were the elites? I felt that the true elites could sweep the whole course except getting #28 (70). There were actually more people in the MO (man open, in pairs) and the MC (man challenge, single) groups to compete with than the ME group. I also knew some people in the MO group ran much faster than me.

I did know that some elites went to the north first and picked up #28 (70) for the 50 points. In their situation, it was less obvious that this point was not worth of the time.

Anyway, this was the first time that I got into the first 3 places in an orienteering that needs running (i.e. not trail-O). Let's see what I would get.


As a second place, I did not only get a medal, but I also got a cup and ... VG Cellumed - Swiss Skincare Product. Who would like to use it? I guess females are more likely to be interested in such products. 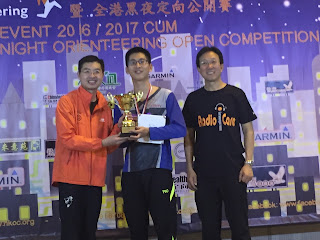 I finished the cup noodles (using the straw from the drink as fork) and the drink before the award ceremony, but I was still hungry. I went back to the village and found only several dessert shops open. After getting dessert, I went to a store to buy a drink for tomorrow's breakfast.

I returned to Ming Fai Camp that I had not been for >10 years. The place seemed to look very different now. I remembered that the rooms were segregated by cutting one half of rooms for the guys and another half for the gals. Now, the rooms had no such distinctions. 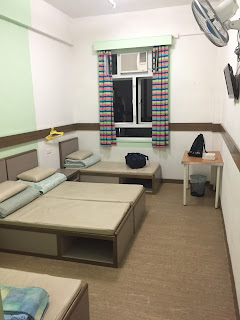 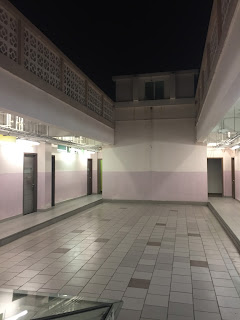 Before sleeping, I thought about if I could optimize my route more to get more points. However, I could not think of any unless I could run faster.