1.      The event
After 3 weeks of orienteering break, I came back to Chicago again for another orienteering event.  I was in the southwest of Chicago this time.  Looking back, I have done several orienteering events around this area, although each time I was in different part of the forest.  The map below shows the entire forest with orienteering map boundaries defined. 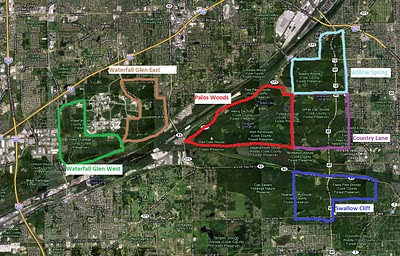 I arrived at the start point early, so I decided to find a few geocaches before the main orienteering event.  There are some interesting geocaches around this area, so I will talk about this later.
When I got ready to start and glanced at the clue sheet, I saw 21 controls.  I was happy to see that because this was the most number of controls I had even seen (except score-O events, where 40 to 50 controls are not uncommon). 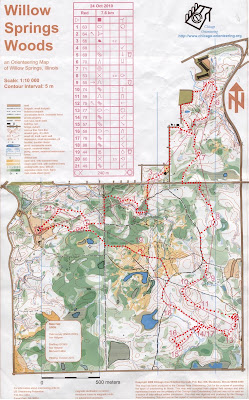 Because of the number of controls, I am not going to describe each control.  Instead, this course was divided into several distinct sections.  I will name these sections as follows:
a.)    The long way north (control 1-5)
b.)    The long way south (control 6-9)
c.)    Southeast short legs (control 10-18)
d.)   The long way back (control 19-finish)
Part a.  The long way north
I was satisfied with what I had done in the first 5 controls.  Perhaps they were relatively easy to reach because simple handrails (i.e. distinguishable linear features such as trails and streams) were available in these 5 controls in most of the segments of the legs.  For example, from start to control 1 was a long way, but I could run mostly on trail and then I ran next to the stream when I got close and was west of control 1.  Control 2 to 3 was also mostly on trails.  I could use the roads for control 3 to 5 for the most parts of the legs.
Although I had tried learning to use the compass to walk to the control when no easily identifiable features are available, I felt that I started getting used to the compass with this course.  The technique that I learned to walk/run using compass is called Silva 1-2-3.  The general principle is that first I copy my intended moving direction on my compass from the map, then I can move to the correct direction with the needle of the compass alone.  The catch was just that I needed to practice several times so that I could perform these procedures correctly and quickly.  For example, when I ran north on the road from control 3 to 4, I copied the direction from the end of the road to control 4.  Then when I got to the end of the road, I could run confidently into the forest using the adjusted compass without looking at the map.
Part b.  The long way south
I think many of my errors occurred in this section.  Moreover, I almost DNF (do not finish) because of a fundamental error.  I will describe each control in this section here:
5à6:  this leg was short and I planned to use compass alone to lead myself to control 6.  However, I forgot to copy the bearing from the map, so I ran in a slightly wrong directly at the beginning.  Fortunately, I realized this later on, so I did not think I lost too much time on this leg.
6à7:  this leg was challenging because the leg did not have obvious handrails to use in straight line, and the leg was not short enough to rely on compass bearing only.  Since it is difficult to walk perfectly in one direction when inside a forest, the deviation from the true location can be large if I walk by following the compass alone for a long distance.  Therefore, this leg took me some time to think.  I finally used the southwest branch of the stream to guide me to a place close to control 7.  I did not realize the following at that time, but I saw control 4 by luck when I found my way to control 7.  Control 4 was close to control 7, and I saw a re-entrant that could help me to get close to control 7.  From there, I could start using compass bearing to get to the control.  I felt a little bit lost in this leg, but eventually managed to find the control. 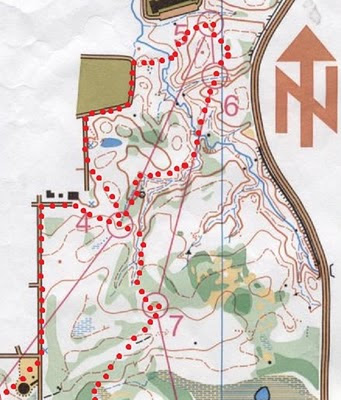 7à8:  I lost a lot of time on this leg for two reasons. 1) From control 7 to the road south of the control, there is a lot of undergrowth, or specifically, thorns.  Now when I look back, I think I may move faster if I run southwest to the N-S road.  Then I may use the E-W road to reach the stream, which is the second half of the leg that I actually ran.  Alternatively, I may also use the major trail to run to a place very close to control 8 (the tiny peak shown by form line may be a great place to go off-trail).  Then, I can avoid a lot of overgrowth.  2) Then, when I climb above some fallen trees somewhere on the stream, I accidentally threw away the e-punch. I swung my arm to keep my balance and then I felt my finger had something missing.  This is the fundamental error.  Without the e-punch, I had nothing to record my status of visiting controls and I would be disqualified.  I also had to pay for the e-punch because I rented it.  Therefore, I stopped and searched for the e-punch.  Fortunately, I found the e-punch after ~5-10 min of search.  You know, I was in the middle of the woods.  The e-punch could be anywhere. 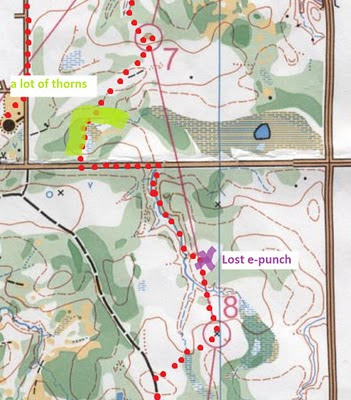 8 à 9: this leg was uneventful
Part c. Southeast short legs
There was nothing much to write about these legs (control 10 to 18).  These controls were not too hard to find.  I think I can do better on some of the legs (e.g. 11à12, 16à17).  I did not hit the right spot when I went to control 12, and I hesitated my running to control 17.  Perhaps if I ran close to the re-entrants from control 11, I could identify the location of control 12 more accurately. 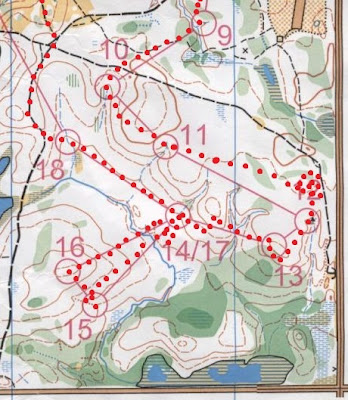 Part d. The long way back
The last few legs were not as hard.  In 18à19, I used the trail for most of the part and I almost got the fastest time.  I could also use most of the trails in the 19à20 leg.  For the control 20à21, I avoided the green area (forest that slows you down) and then used the stream to lead me to the control.
2.      Geocaching
There were some interesting geocaches near the start/finish line.  The locations of the “caches” were marked with orange crosses. 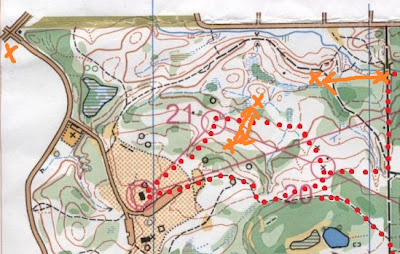 On the left was a regular geocache that was in the woods.
In the center, the two crosses marked the same series of caches that we called them a multi cache.  In this one, I had to visit the first location and found a locked ammo box marked with another GPS coordinates.  Then, I went to this location and found four letters.  I had to figure out that these four letters were the password for the lock in the first cache, unlocked it, and claimed the find of the cache.
On the right, there was a mystery multi cache.  Before I went here, I had to solve a puzzle that involves Scrabble to find the first GPS coordinates.  At the first coordinates, I found more Scrabble tiles to solve another puzzle and find the final cache location.
Posted by johnayuen at 11:16 AM