Classes are of course an important part of a dance camp. There are many world-class instructors coming to this camp to teach. For me, however, I think Herrang Dance Camp offers something unique, making classes a bit less of an importance. Thus, I signed up for the half session classes rather than full session.

Half session has the following advantages:
- Classes start at 3 pm at the earliest and end at 7:30 pm at the latest. Thus, I can stay in the dance party longer. On average, I left at 3:30 am, and then I could still get a decent amount of sleep. I could get 8 hours of sleep if I wake up after noon time.
- It is cheaper.
- There is no need for audition, but the half session class is supposedly at the int/adv level. 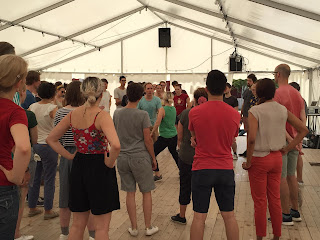 Yet, I think I miss some cool stuff in the full session. I think in the full session, all the lindy instructors stated in the weekly schedule would be eventually met. Not in the half session, though. I was expecting to see Skye in the Week 2 half session, but it did not happen. Thus, I sometimes looked into the tent in the early afternoon to see his way of teaching.

According to those who took the full session, the full session also had at least a class of African dance (because jazz dance comes from this), and a class of swing history from the Herrang's point of view. As a person who would like to know more about the history of swing dancing, I feel that I miss a bit by just taking the half session.

This does not mean the half session is bad, though. Somehow, the classmates in the half session were pretty good. The swingout basics of the follows were mostly solid. Not surprisingly, they were the people that I often danced to in the dance parties. Normally, as a lead, I would meet more follows in the class than the other leads. This time, however, I also got acquainted with several leads. Besides Phillippe from Switzerland and Drew, I met Ivars that is from Latvia. I had his photo swimming in the middle of a lake. 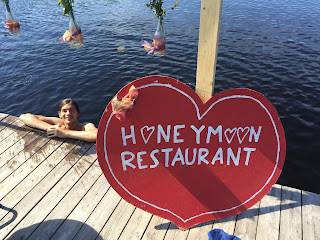 The interactions with instructors in Herrang are quite different from the other workshops. They not only appeared in the classes and dance parties. They were around everywhere during the class breaks. One of my favorite instructors in this camp, Katja, could be met several times in a day in the Ice Cream Parlor (ICP). She seemed to need coffee every day before teaching the classes. She might get my attention because her red hair style is unmistakable. I eventually got to dance with her in two different days! Skye was another instructor that I randomly passed by a lot. He gave me an impression of humbleness. When he danced, his upper body gave me attention, since he seemed so relaxed with the movement.

In Week 3, there were more instructors that I could recognize. I somewhat feel that it was too bad that I could not take classes in Week 3. Peter, Naomi, Remy, Pamela, and Ramona were teaching. Laura was also there, although she was just enjoying the dance parties. I sometimes watched briefly on how they taught the classes. In the dance party, I also watched their dance style characteristics.

By the way, in the Herrang Dance Camp's audition, students first dance with several people, and they rate each other the dancing ability. The score for each student is calculated, so that a rough draft of the level cutoff is made. On the second day of the audition, the instructors come in to fine-tune the levels in each group. Normally, there are only 3-4 people being moved up or down the levels, meaning that peer audition is quite effective.
Posted by johnayuen at 1:35 AM