On my first day in Herrang, Phillippe and Vicky, from the scene of my hometown Hong Kong, were already there. Since they are experienced about the camp, I learned about some rooms for general accommodation are quieter than the others. I also needed to queue up early to get the room that I wanted. 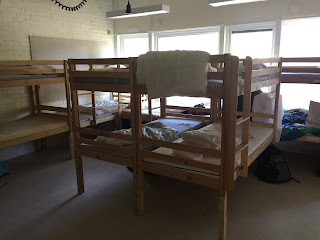 Phillippe from Hong Kong showed me the room that is supposed to be quiet. I chose the bed next to the window without good thinking. In the following days, I had to sleep with the rising sun at 3 - 4 am.

Yet, this is probably my only complaint. Power outlet was next to me for charging the phone. Best of all, the people who stayed around me gave me great Herrang experience.

Above my bed, there was already a girl staying there. We introduced ourselves. Her name is Ella. She is from London, already stayed in Week 1 of the camp, and she will stay for the entire Week 2 also. When I introduced myself, I once again felt that "John" is too generic, so I switched back to introduce myself as "Wangki" -- you know, "Onekey".

Every day from 9 pm - 10 pm (except Friday), there is a daily meeting of the camp. Yet, a better name for the meeting is probably "the Daily Show of Lennert". It is far from a boring list of announcement. Instead, a long-time organizer of the camp, Lennert, hosted the "meeting". On top of announcement, there are interviews and performances, some with great surprises. On the first day, I was with a new friend to attend the meeting.

On the next day, there was another guy from Switzerland joining this company. His name is also Phillippe. His general accommodation was far away at the marina, which is about 1 km from the main facilities. Thus, he rented a bike for a week. He had the same class schedule as me, which was the half-time session lindy. The key for the half-time session is that the classes would not start until 3 pm at the earliest, so we could party more in the evening. It is of course less expensive than the full-time session. Besides, one does not need an audition to enter the half-time session, but it is expected that the class is at the intermediate-advanced level.

Since this next day (Sunday), Ella, Phillippe (from Switzerland, same below unless stated otherwise), and I always attend the general meeting, standing or sitting at the back of the second-floor ballroom. After that, we usually either attend the Library Talk or the Crash Courses together. Throughout the day and the evening, we often sat together, and talked about what we had learned and what we had done. Of course, we danced during the evening parties.

We became closer friends each day. Phillippe asked me suggestions on where to fly to after his Week 2 in the camp. He said he would like to go to Singapore. I told him it is a good idea, since the world is hot everywhere anyways, so going to a city near the equator is not too bad in comparison. Plus, I told him about the inexpensive and good food there. In the end, he got his ticket to travel to the SE Asia.

Wednesday is the cultural activity day. According to Lennert, Wednesday used to have masquerade party, but low number of people dressing up for the masquerade led to a change to the cultural activity day. On that day, the two swing VIPs (how I called those who are old enough to live through two ages of swing dancing), Sugar and Barbara showed us a routine that they did in the Savoy Ballroom (?), the place where the dance was evolved. After the one-hour lesson, there was originally a plan to take recap video of the routine. Even Phillippe from Hong Kong asked me to get the recap because he was leaving. Yet, the two VIPs became the photo booth with the students, and eventually there was no recap from them. Since Ella also learned the routine, we asked someone to take a video of us dancing this routine. Thus, we both had the routine with ourselves performing it.

On one occasion, the original plan was to take a Crash Course of a fast dance routine, Mama Stew. Yet, it became watching the World Cup semi-final, since England was in it

We also got pizza together in the evening party. The pizza was sold out fast, and it could take 30 - 60 minutes between the order and the pizza. Pizza became our dance breaks.

Here is a picture of the Friday Savoy Night, the last night of the week: 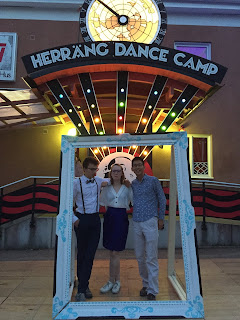 Good things eventually come to an end. On Saturday morning, they left the camp by different bus. I also needed to move my luggage to another place to stay for Week 3. We had a farewell photo: 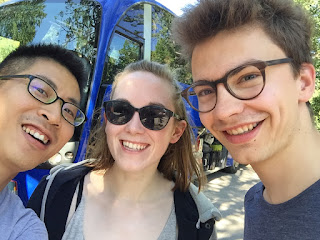 This did make me feel a bit sad. It is really great to have friends around during a week-long workshop. Now, we do not know when our paths will meet. Going to Europe is a trip too long for me.

Besides, next to my bed there were also 3 Americans. Two of them are from Oregon and one from Hawaii. The closest swing scene that I have been to near these states is probably in San Francisco or in Seattle. I met Drew (the guy) more often, since we took the same half-time session of classes. 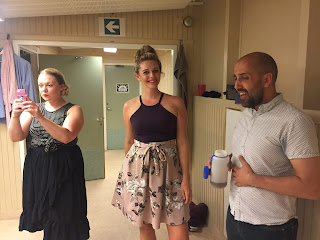 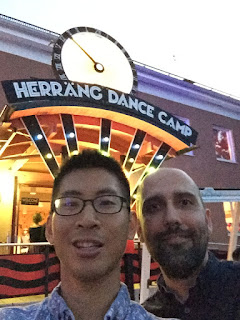 There was also a German girl who lived near me. I now forgot the name. Nevertheless, we sometimes talked about the classes and danced together.

I feel that if I go to Herrang for a week in the future, I will definitely choose general accommodation again, since I had a great experience with this housing option. General accommodation is a great place to meet new people and may forge friendship (classes are of course another place to meet new people, but I will not discuss this further here).
Posted by johnayuen at 1:38 AM