The 10th Illinois Marathon in 2018 -- the unexpected finish

After successfully defending my research, my co-worker, Emily, asked me if I would run the Illinois Marathon at the end of the month. At first, I was against it. I may be able to run a half marathon, but I could not run a full marathon without extensive training. Yet, Emily emphasized how active I am, and she was doing a full. Since she did a full with me before I left, and this Illinois Marathon was in the 10th anniversary, I decided to register for a full if I could finish a half in a weekend.

(Besides, I felt that I would like to know my physical limit. Doing a full marathon without enough training would likely result in an unpleasant experience, but how it was like? I would like to find out. If it results in walking the second half of the marathon, or even results me to quit the race, I think it will be an experience, too. Still, I would not push myself to death.)

Thus, I ran a dog route half marathon in the weekend, and I could finish it, and registered for a full. 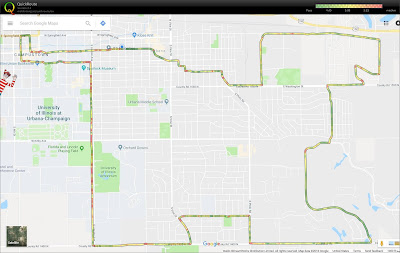 As expected, there was no marathon training at all.

I still tried to run every Tuesday to Thursday, in a 4 mile (6.4 km) - 6 mile (9.6 km) - 4 mile (6.4 km) schedule. However, I never did long distance training (more than a half marathon distance) in the weekend ever since. My weekends were either orienteering or dancing. On the week before the race weekend, I traveled for the whole week, doing a lot of dancing and orienteering, and some biking, but not any running.

Thus, I was really under-trained for this full marathon. I did not run any distance more than a half. I was not sure whether I could even finish the race. On the day before the race, I went to Courier Cafe to have a creamy soup, a piece of lasagna, and a butterscotch milkshake for the dinner, so that I could have energy to run on the next day.

On the race day, I had to run/walk about 2 miles to get to the start. I registered in the Corral C, where people expected their marathon finish time between 3:45:00 and 4:00:00. The race used a wave start. Corral A would start the race first, followed by a couple of minutes of wait. Then, Corral B started and had another couple of minutes of wait. Then, Corral C, Corral D, and so on.

There were also pacers. I was thinking of following the 3:40 pacer, but they were in Corral B. Since I was supposed to stay in my corral, I went to the front of the corral. When the race started for Corral C, I at first ran slowly to avoid hitting other runners, but I soon ran at my comfortable pace, which meant that I passed a lot of the people to the front.

In Mile 1 and 2, I was running with only 2 or 3 people, until I caught up with the people in Corral B. After Mile 2, I saw the 3:40 pacer, and I stayed with the pacer for a while. Yet, I found myself that the pace was too slow for me, so I passed. Later, I also stayed with the 3:35 pacer at Mile 5. I went to pee, which was not good because it could take more than a minute, and I lost the tempo of the race. Yet, I caught up with the 3:35 pacer again. I eventually passed it, and found the 3:30 pacer at around Mile 9.

I stayed with this pacer for quite a while. At the halfway point, I found that I used 1:40:XX, which was almost my personal best (PB) time for my half-marathon. I knew I was running too fast for a full marathon, and I guessed something wrong would happen soon. I passed the pacer a bit after the halfway point, but I went to pee for a second time in Mile 14, and the pacer passed me again.

I began to feel tired at around Mile 17. At Mile 19, the 3:30 pacer finally passed me. I could still run, but very slowly. Besides, my tummy started to feel hurt, and would like to go to the toilet for an extended period of time. I guess it may be because of the milkshake last night. At Mile 19, I got to ask for a toilet at someone's place. It was nice that the race sometimes passed through neighborhood, and spectators were willing to offer help. Based on the split time, I was in the toilet for more than 5 minutes. I thought I should just focus on finishing the race. My quads were hurt, but after going to the toilet, I felt easier to run again.

In the last 6 miles (note: a marathon is 26.2 miles), I suddenly felt a new stream of energy in my body, and I could push myself to continue running. I might not be as fast as in the beginning, but I could at least run with reasonable ease. When I passed the finish line, I found my finish time to be 3:34:XX. This was faster than my previous marathon in Chicago by at least 2 minutes!

That was great, but I also felt that my result was horrifying: with minimal training and being in restroom for three times, I could still beat my previous PB. I was quite sure that if I got to train seriously, I could easily beat the 3:30 mark.

This race also told me that:

1) I do not need to slow my current half-marathon pace to finish a full marathon.
2) Having a milkshake may not be good the day before the marathon.
3) Even without running as a training, other cross-training (e.g., biking, orienteering, dancing) helps me to stay fit to finish the race.

After the race, I first got a lot of food that was served to the runners. This included unlimited pasta, pizza, cookies, and bananas. There was also Gatorade provided.

They also had chocolate milk: 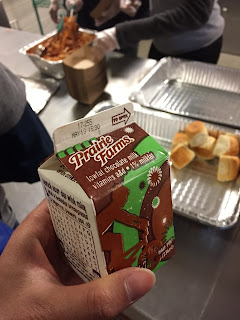 I was waiting for Emily to finish, so that we could take pictures together for this final race. Yet, I knew that she was in trouble because from the racer status, she took almost 2 hours to reach from 13-mile point to 20-mile point. Thus, I went out to get free beer for the racers. This was not surprising for me. Along the course, I had seen unofficial refreshment like beer, or even margarita. 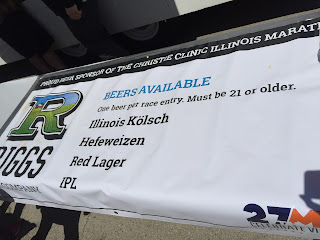 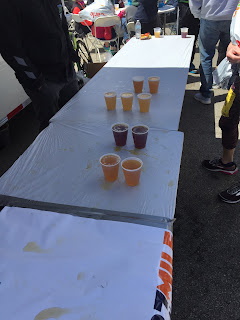 Later, I found this booth for taking picture. I did beat my PB (or PR) today! 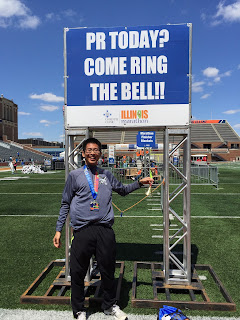 Emily finished almost at the 6-hour mark. She talked about the leg cramping at the halfway point. I think we both did something crazy. She challenged me to finish a full marathon with minimal training, and I accepted it. 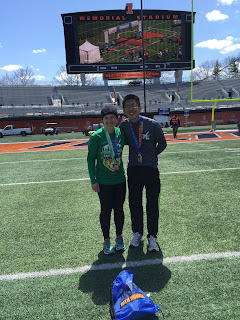 After this marathon, I probably would not aim for a better time in the future for now. There are many things in life more important than finishing a full marathon under 3:30, and I do not think I can put time to train for a better marathon time.

Still, this daring marathon experiment should be kept in my life record.

(P.S. as per previous tradition, after finishing the Illinois Marathon, there was a swing dancing event in the same evening. Thus, I went swing dancing in that evening, too. I was too tired and could not dance much, though. It might be because I became old, or because I did it after finishing a full marathon. In the past, I only did a half before the dance night.)
Posted by johnayuen at 11:54 PM