A proposal of zero-answer tolerance in trail orienteering

One of the most highly debated topic in an elite trail orienteering competition is that what constitutes a zero answer for a control point (i.e., among all flags placed around the control point area, none of them is correct). The reason is that a flag slightly placed off the correct location can be interpreted as a zero answer, even though it is not the course setter's intention. Since all measurements bear uncertainty, having some rules to specify what conditions should the answer be zero is important.

However, simply putting a distance uncertainty (e.g., zero means no flags are within 5 m from the correct location) is a mistake. For example, if a flag is put at an inside corner of a fence, but the control description says outside corner, even though the correct location is touching together, the placement of the flag is still incorrect. If only the distance uncertainty is used, the answer will be considered correct (not a zero answer). Intuitively, there are other factors that affect how the answer for a control point should be zero.

Thus, by considering other factors, I propose a flowchart on the zero tolerance. Note that the distance uncertainty is considered after the control description and height are considered, not the other way around. 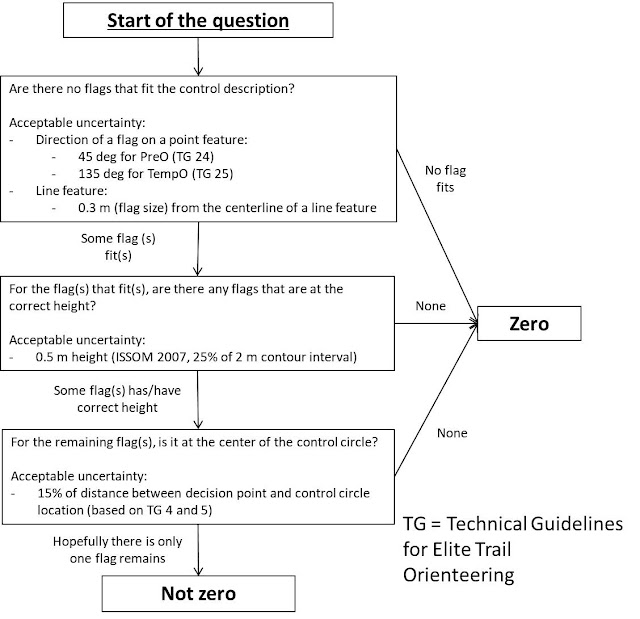 I was informed that there is a comment on the above flowchart. The comment comes from a person who is experienced in trail orienteering in the world:


I'm afraid these tolerances are far too close for me.


The "one feature, one kite" philosophy is maybe a bit extreme for me, but it has the advantage of being easy to understand.


For the height example then for a Z I'd want the correct kite to be clearly in at least the next contour up or down AND for it to be at least a horizontal distance according to the tolerance specified (and that for me is an absolute minimum, there will be others who want things a lot further apart than that).


Also note that I think 45 degrees is too close since canes can lean in wind, flags can get blown around and Planners shouldn't want to plan controls where the control is SW or SE instead of S - in fact I don't believe having N vs S is good planning since if it is a point feature then by accurate map reading you've found the right feature so it is anoyign (sic) when you are tricked by the planner (although in TempO if BOTH are present then that is OK to pick the right one).

The bottom line is that Zeroes should be obvious, you should never have to think "is that close enough".

An ideal flowchart would be [is there a kite clearly at the correct location with the correct description] / YES: choose letter; NO: Zero.

After reading it, I think I should explain the following items:

1) The difference between course planner's and participant's perspectives

The zero tolerance flowchart is intended to be for the participants only. For the organizer, the distance between two flags (kites) may be increased to make answers (including zero) clearer. I agree with the commentator the tolerance flowchart should be the absolute minimum. I also agree with the commentator that "the bottom line is that Zeroes should be obvious", which echoes with TG (page 39). Yet, how the course should be set (course planner's perspective) should be different from how the question should be answered (participant's perspective).

The reason is that I notice that some course planners do not necessarily follow "one feature, one kite" philosophy. This usually happens when the question is intended to be solved by distance judging or by sighting lines. If examples are needed, go to page 13 and 15 of the TG. It is known that some course planners require participants to be more precise, while others think that "identifying the correct location with the correct description" is good enough. However, the participants may not know the type of course planer beforehand. I think that for fairness, there should be a maximum requirement of participant's map reading accuracy in a competition, whether we know the course planner or not. As long as the participants know that the flag is off because of placement location uncertainty, and not because of intended zero answer, then I am happy with it.

This is one of the reasons why I take the risk to write out the zero tolerance, even though I know this is a hot topic. This relates to my point #2.

2) The reasons to quantify uncertainties

- The commentator raises a good point that the zero tolerance flowchart may be abused by the course planner for setting questions to trick participants, like intentionally put a flag on the SE side of a boulder, even though the Pre-O question asks for the S side (45 degree separation is the allowed uncertainty in Pre-O, TG 24). I think it is good to add a few sentences for the above flowchart to say that "the zero tolerance flowchart is intended for the participants to decide whether an answer is zero; the course planner will nevertheless make the best effort to place the flags as accurately as he/she can".

- Concerning the flowchart may scare away the trail-O beginners, we may still say up front, qualitatively, that the basic for zero answer is that it is supposed to be clear (bold it if needed). Then, for the details, read the flowchart.

- Concerning the height example, I put height as a higher priority than distance because some places in Hong Kong can be pretty steep. As an extreme example, one flag is placed above a cliff, while another flag is placed below the same cliff. Even though the horizontal distance between them is perhaps just a flag size away, the location can be intuitively interpreted as different. Separate the height element from the distance element allows height judgement questions in trail-O, where distance plays little part.
Posted by johnayuen at 11:58 PM