A sub-class of trail orienteering

Trail orienteering (Trail-O) tests participants' map reading skills without the need of running fast. Currently, there are two major competition styles -- Pre-O (Precision-O) and Temp-O. The flow and strategies of a Pre-O have been discussed here and here. In this article, Temp-O will be discussed.

In Pre-O, there are usually a few timed controls (TCs) that are used to break ties in ranking. Participants need to correctly answer TCs as fast as possible. A wrong answer gives a large time penalty.

In Temp-O, all controls are timed. Participants go to several stations. Each station has 4-5 control questions. Similar to TC, participants need to identify which flag correctly show the location in a map as fast as possible. Each wrong answer adds 30 seconds time penalty.

There are some differences between Pre-O TC and Temp-O. Pre-O TC usually has 5 flags to look at, while Temp-O usually has 6. Moreover, in Pre-O TC, one of the flags must be correct (i.e. no zero answers). In Temp-O, the "none-of-the-above" zero answer is allowed.

Now, we will look at a full Temp-O event, which was happened in 10 Dec 2017 in Sai Kung Outdoor Recreation Centre, Hong Kong.

Example questions in a Temp-O event

Note that all maps are set to the north. Thus, the photo view direction is close to the top of the map. 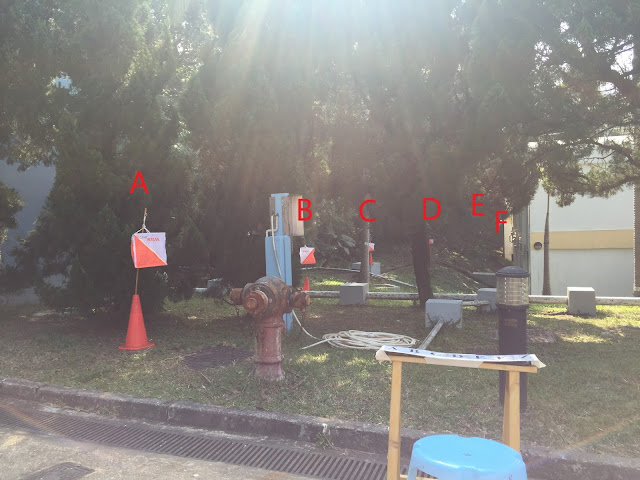 Question 1: control description says building SE outside corner. There seem to be only 3 buildings in front, which are also shown on the map, so being tricked by parallel error is unlikely. The middle building does have a flag at the SE corner, so the answer is E.

Question 2: control description says building SW outside corner. Flag B is close, but is not put at the corner at all. No flags are at this corner, so the answer is Z (none of the above).

Question 3: control description says pipe west end. I see the pipe, but the west end of the pipe is hidden from the view, so the answer is Z.

Question 4: NE end of the hedge. Flag C looks like it is at  the NE end. However, the end means the flag should be placed at the mid-point of the width. However, Flag C is put at the corner of the hedge, so the answer is Z.

Question 5: W end of the closer pipe. Flag D shows at the right place, so it is the answer.

Question 1: The fence has 2 semi-circles. Flag B is placed at the closer semi-circle, but the map points to the farther one, so the answer is Z.

Question 3: At the closest light pole. Flag C fits. The side where the flag is placed is also correct. Thus, C is correct.

Question 4: The hedge near the building has a Flag E. The side the flag is placed is also correct.

Question 5: Flag F is placed at the closer hedge. It is good.

Question 1: The thicket is in front of a building, so it is very close to where I sit. Flag A may not look exactly north of the thicket, but as long as the description is not at the opposite side, the answer is considered to be correct (in Temp-O, a +/- 90 deg of error in a control description is allowed). Thus, the answer is A.

Question 3: The two canals meet closer to me than the building. C looks correct.

Question 4: If the participant cannot figure out Question 2, they have another chance to answer this. The answer is F.

Question 5: The circle is quite far away from me. E is the furthest and the location looks close. I cannot clearly see the re-entrant, but I should still say E quickly.

Question 1: It takes me a while to find out where I am. Which paved oval am I at? Once I find where I am (the oval at the bottom), the circled location cannot be seen, so the answer is Z.

Question 2: The tree at Flag A is too close, since it should be near a path bend, not at the junction of the path and the paved oval. B is the right tree.

Question 3: It is hard to say whether a flag is at the part of an open land from afar, but based on the distance and direction, Flag D is close. Since time is precious, it is okay to guess D without further examination.

Question 4: I have to judge whether Flag C is on the right terrace. C is correct, but somehow I think there is a terrace before C, so I get this wrong.

Question 5: The map suddenly brings to another area: near Flag E and F. By counting the ovals on the building, Flag E is not at the right oval. Flag F is not next to the building. The answer is Z.

This was my second Temp-O experience. I got 4 questions wrong, and I did not expect any prize in this competition. I still think I could make less mistakes using the similar time. For each station, I used around 40 seconds. Elites can finish a station in around 20 seconds.

It was unexpected that I got a third-place. Since there was a trail-O clinic instructed by Owe, who is an experienced trail-O official from Sweden, he was invited to give the prize. I was grateful to receive the prize from him. 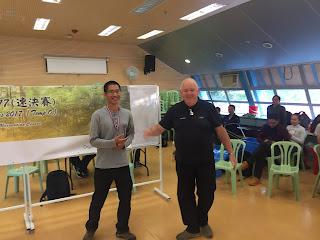 I probably still enjoy pre-O more than temp-O because I can take more time to interpret the flag choices. To do well in temp-O, I have to be trained to make decision fast without making mistakes.
Posted by johnayuen at 10:48 PM