On June 9 (Fri), 2017, I was with a group of swing dancers from Hong Kong to take a train to Guangzhou for a swing event - Swing Canton Anniversary. The train ride was about 2 hours. When I was a kid, taking a train for two hours was very long. After travelling in the US often, I feel that such trip is now not a big deal. 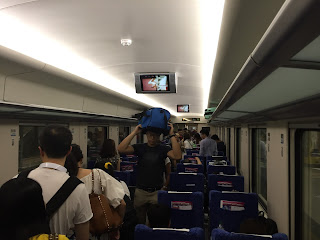 Once we got to the Guangzhou East Station, it was already past 9 pm. We lined up for taxi and went to our places to stay first. 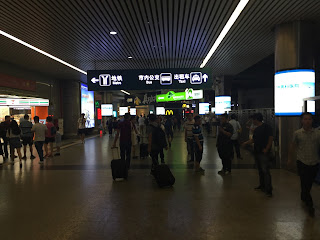 I was with 3 other guys - Toby, John Lie, and Angus, living in an interesting service apartment. The place is a typical multi-floor apartment building. However, since there are often rooms in the apartment that are not sold, there is a kind of business of renting these empty rooms for travelers. Our plan were to have 2 people per room. Each room has 2 beds. In reality, there were 3 beds in one room, and the place was large. The rent was inexpensive. It was ~ RMB250 per person per day. 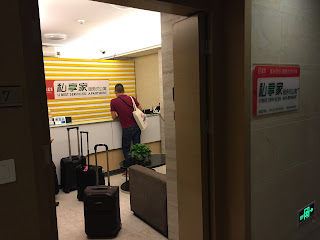 When we got to the dance venue, it was already 11 pm. The distance between the service apartment and the dance venue is quite long. The Jack & Jill competition (some may prefer the term "Mix & Match") was already started. I wish I could be early to participate, since I like this competition format the most. I am not very serious about the competition, but this competition format has some social aspect that I like. I probably do not know the partner, but we can introduce ourselves before we make the dance work. To maximize the worth of going outside to dance, I think it is important to dance with people that I do not know. 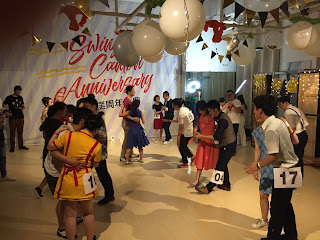 I stayed and watched the competition. The three guys that came with me decided to have dinner first, since we all did not have dinner before the train ride. I was hungry, too. However, I found snacks and drinks on the side of the dance floor, so I made use of them to maximize my dance time in Guangzhou. The mission of this trip was to dance, and not anything else.

The following video was taken during the Jack & Jill competition:


During the open dance between the heat and the final of the competition, I chose to dance with people that I did not meet before. It was great to see some HK dancers thought in the same way. At one point, I randomly met Yancy, who was one of the instructors in the HK swing scene. She immediately asked someone else to dance, and told me something that I should dance with other people. I was not only not offended, but I felt that should be the spirit of attending a foreign dance event!

While this event was organized as a weekend workshop format, most of the people from HK (including me) would not participate in the workshop. I was told that the workshop was tailored towards the beginners. Since workshop costs extra, I would just treat this event like a lindy exchange. Still, when there are instructors participating in a workshop, I would be happy to dance with them once.

This time, I met someone who seemed to be a pretty good dancer. We danced a song, and she seemed to like it a lot. Thus, we introduced to each other. When I heard that her name is Ari, I felt that I was honored, for I was dancing with one of the instructors in this workshop. I guess Simon and Ari are on the way to be famous in the world of swing dance professionals. They won the advanced strictly competition in the Camp Swing It 2017 in South Korea, and they seem to have a tour of instruction. They taught in the Swing Canton workshop. The week after, they also give a workshop in Hong Kong. Ari would like to dance one more song, so we danced one more.

Toby, John Lie, and Angus could watch the Jack & Jill final after their dinner. A few more songs later, however, the dance concluded and we needed to go to the late night dance venue, which was within walking distance from our service apartment. The venue is a bar. We danced till 3 am there. The organizer wished the dance could be longer, but bars in Guangzhou closes early.


On the next day, the Hong Kong swing people met at a dim sum place in the afternoon for brunch. As usual, people would be still sleeping in the morning. The food was not only good, but was also decorated well. This is something I seldom see in Hong Kong dim sum. 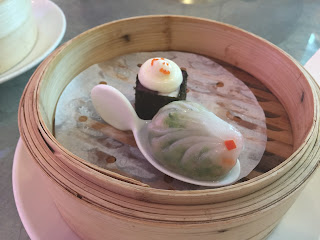 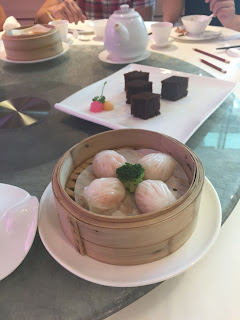 We four guys were then walking around. This is the Guangzhou Tower. I was just leading them to a geocache nearby. 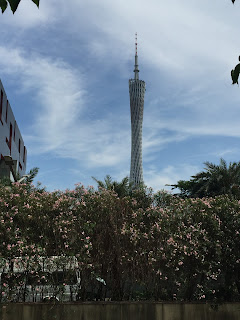 In the afternoon, people split. Some would like to get massage, while others would like to go shopping. I just went back to sleep, since I wanted to spend as much time for dancing in Guangzhou as possible. Before taking a nap, I took a picture from where I stayed. 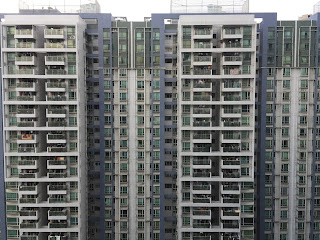 In the evening at 6 pm, we four guys went to a Sichuan restaurant for food. It was great that all four of us could eat things that are a bit spicy. Great restaurant choice! 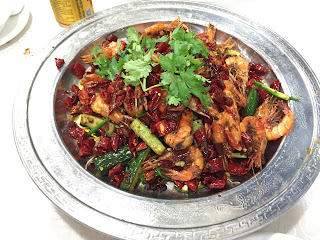 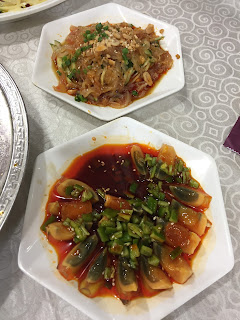 The Saturday dance and late night dance were quite similar on Friday. There were strictly competitions. There were performances. There were a fast lindy competition that I thought about joining, but seeing that no Hong Kong people join, I held back and did not do it. This thought made me feel strange. Having a group to do things together is great, but having a group for everyone to conform to a standard is something that I have a feeling of concern.


This trip, I also met a person that I knew I have seen him before, but he probably did not know me. His name is Yulai.

I heard of his name before I left swing for a while in the US. In 2013, when I was with a group of swing dancers from the UIUC travelling to Purdue, I saw him often got into finals of the competitions, along with my UIUC fellows who became advanced dancers so quickly. I was amazed with what they could do, but I knew that I could not do yet. We did not formally talk. I thought that I was not inside that swing circle.

Now, I met him again in another country, but my thought about swing dancer was a bit different than 4 years ago. I felt that I could say hi to him, and he is actually pretty nice. Although we still did not talk too much (if he wants to know about the recent swing scene in Purdue, I could say a few things), I feel that we may still meet in the future, if I attend more swing events around Asia.

On Sunday, before I left Guangzhou. We four guys had a good lunch for many baos. 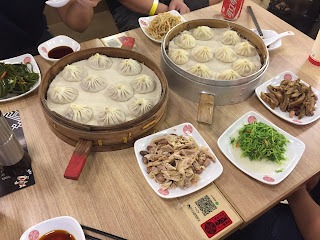 Then I went to the Guangzhou East Station alone. While waiting for a train, I found this booth for karaoke. Interesting. 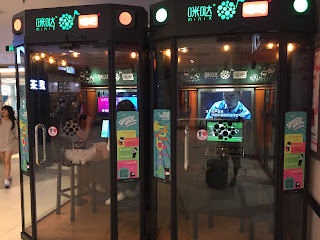 Then, I took a fast train back to Shenzhen, and then back to Hong Kong. 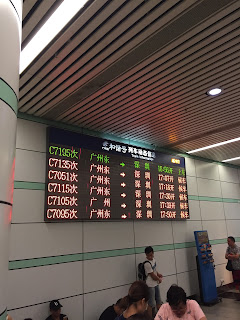 After this trip, I got an experience on how I fit into a swing dance scene in Asia, and what possible issues that I may face.