This year in March, I briefly mentioned an engaged couple participated in MSF Orienteering in Lamma Island. It turned out I had heard both of the names, since both had some publicity in orienteering. The groom, nicknamed "40,000", had discussed with me on orienteering matter when I was still in the US. The bride, Julie, was not introduced to me yet, but I thought I had seen some orienteering blogs written by her some years ago. Since the orienteering community looks like a big family, I got a FB invite about their wedding ceremony.

The wedding was in 5/20/2017 (Sat). To Chinese, this is a lucky date because 520 sounds similar to "I love you" in Mandarin Chinese. The wedding was organized in a Chinese restaurant, which I think is a common way that Hong Kongers organize wedding. During the reception, there were places for taking pictures, signing names, accepting gifts for the couple, and having marjong tables. What was unique was that since both were orienteers, someone also promoted orienteering by laying out electronic checkpoint punches on tables, and allowing everyone to use a map to punch these checkpoints in a certain order, as fast as possible. 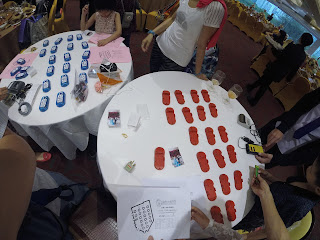 After finishing the tabletop orienteering game, each person could get a card, with one side printing the wedding picture of a couple, and another side printing the map layout of the Chinese restaurant. Each person also got a result sheet showing the finish time and split time. 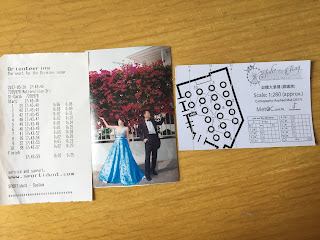 I also found that there were also several board games near the marjong table. Perhaps this is the younger generation style for the wedding reception?

The following video summarized the above:


Near 6 pm, more and more people came in. There seemed to be at least 3-4 tables reserving for the orienteering family, so I could recognize many faces in this wedding. Some people brought the maps from a city orienteering event on the same day. Another person brought maps from the World Master Orienteering Championship (WMOC) in New Zealand. There were also some people coming late because they had to prepare for the Sprint-O Ranking Event on the next day.

I thought I would only stay in the wedding ceremony, take a few group pictures, and leave. While I was invited in the FB event, I did not receive an official invitation for this wedding, so I felt that I should not stay for the dinner. However, a few orienteers did want me to stay. A couple of them even helped me to ask if there was room for one more dinner seat. Thus, I left the restaurant for a while to get the gift from the bank. In Hong Kong, it is acceptable to give gifts in a form of cash.


At the dinner, I was invited to sit with an experienced course setter/ mapper in Hong Kong. We had some great conversation while eating. During the dinner, we saw their young pictures and how they met. They had their sharing time, the moment of singing Karaoke, and the cheers to each table. I felt happy for them, and wished them good luck for the next stage of life. Group pictures were returned to each guest during the dinner, which seemed fast, since the pictures were taken about an hour ago. When guests were about to leave, the bride, the groom, and their maids and men formed a line to say goodbye to each one. After watching the video on what they did in the morning, they must be very tired at that moment.

Besides having 3 pictures with the couple, there were also souvenir from the orienteering in the restaurant. Thank you for your FB invitation. Congratulations and wish you both having better future! 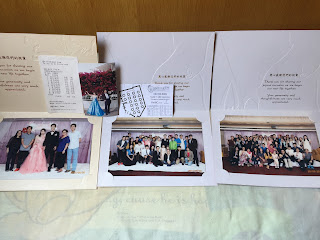 Posted by johnayuen at 8:04 PM