This ranking event occurred in Tsing Yi. The event center was at a school. The following video shows the surrounding of the event center. It showed the official time, the result processing station, the real-time result display, and the number bib station.

Yesterday's VIP, 40,000, was also in the race, despite the wedding ceremony: 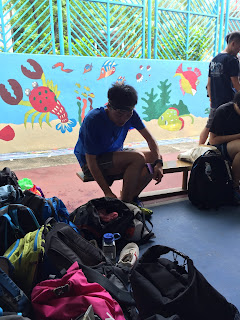 The start was outside a park. Each lane was for different competitive group. 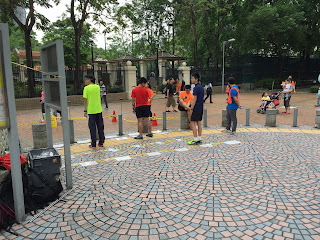 The map for M21 is as follows (see the enlargeable map here): 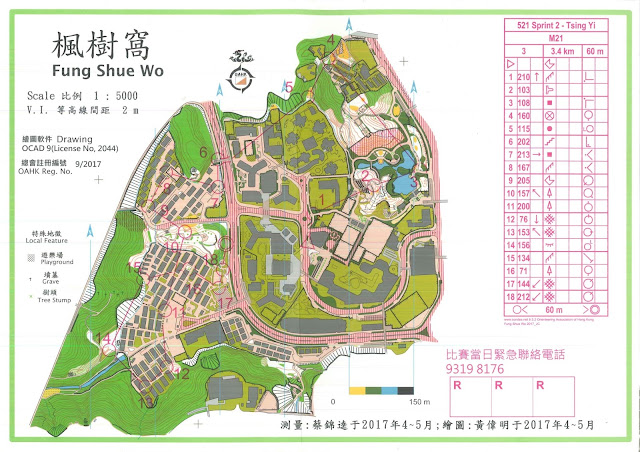 Before the race, I did not check who was 1 minute before me. When I checked the video, I realized that he was one of my orienteering mentors: Ricky Law. In fact, I followed him most of the time, but I did not realize it. Thus, I will refer to the annotated map and the YouTube video often.

The annotated map (enlargeable map here) shows my route in orange, but I also show alternative routes in purple and red. 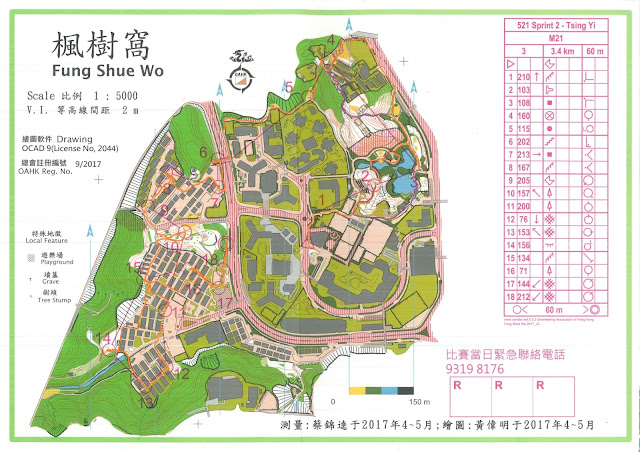 
To #1, I suddenly stopped in the middle of the road because I thought the road was not legal to cross (red vertical lines mean forbidden areas). Upon more careful reading, the red lines did not appear on the road, so I proceeded.

To #2, I did not know whether I broke the rule. When I saw my checkpoint, there was a small wall that was easy to step up, and it was mapped. I expected the wall in the map should be gray in color. However, it was black. In International Standard of Sprint Orienteering Maps (ISSOM) 2007. Black walls are not legal to pass, while gray walls are okay to pass. In this case, I would rather map it as a gray wall, but I did not know it was the mapper's intention. If the mapper thought this 50-cm-tall wall is impassable, then I broke the rule. 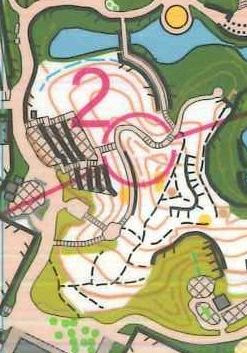 To #3, I still thought that the northern route was faster. Anyone ran the southern route (in purple)? Moreover, in the north, I should use the red route to shorten the running length.

This was the point that I met Law Sir. Here, it is nice to see that we used different route to #4. Law Sir used the purple route (I guess), while I used the orange route. However, I made a 1-min big mistake when approaching the checkpoint. In the end, he was ~10 seconds faster than me. Without the mistake, however, I think my route was better.

When going to #5, I think I saw Gilbert taking picture of me. When approaching #5, I saw Law Sir leaving #5.

Seeing that the drainage was dry, that route to #6 should have an absolute advantage. Thus, there were just a lot of running going to a different area of the map.

#8 I did not know why I took the orange route. Taking the purple probably needed less thinking, and slightly faster.

#10 is somewhat tricky because it was intentionally a dog leg (same route when going in and out) when coming in and out of the checkpoint. This was the point that I caught up with Law Sir. Then, I felt that I followed him most of the time at #11 - #14. I tried to run a different route if possible, but sometimes following was the best option. After #14, I ran ahead of Law Sir and I was on my own.

To #15, I think I broke the rule by crossing the yellowish-green area (permanently out of bounds). Sometimes I was not sure how these permanently forbidden areas were mapped. Common sense should tell me not to walk into hedges and flower beds. However, when someone mapped the grassy areas as yellowish-green, I might absentmindedly enter an area that I should not step in. Part of the reasons was that I simplified the map for this leg.

To #16, I made another mistake by running too far out. I think I was tired and not memorizing my personal reminder properly. I told myself to run two more blocks after a small park-ish area. Then, turn left and keep running to another park-ish area to find the checkpoint. However, I did not memorize that the park-ish area was on the left, not on the right. Thus, I made probably another 30 sec mistakes here.

Finally, I got to the finish: 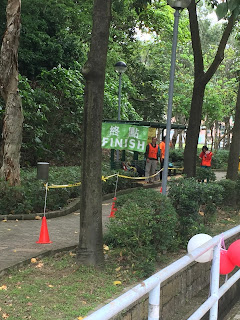 At the finish, I thought the first place could finish at 17:xx. However, I was surprised that first place was only <1 min faster than me. What happened to them? 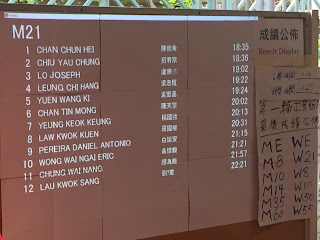 Thus, while I was at top 5 of my group, I felt lucky that my two substantial mistakes did not affect my ranking too much.
Posted by johnayuen at 12:12 AM