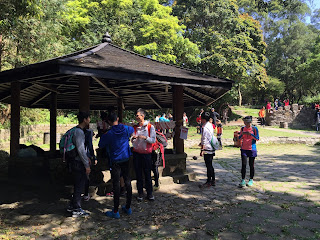 Last Sunday, I went to Tai Mo Shan for another orienteering race. Perhaps many people going there for hiking, the only bus that got there skipped the bus stop because of the full bus. Eventually, five people going there shared a taxi.

For the intermediate and advanced course participants, baggage were collected at the start, and could be claimed at the finish.

At the start, I sold the awarded GPS watch to an elite orienteer. I was thinking of using the money to buy another gadget that can be used in orienteering -- action camera (e.g. GoPro). With it, I will have more videos and still frames to show the competition progress.

The following is the MO (Men Open) map, applicable for M21 participants. My GPS route is also shown on this map. 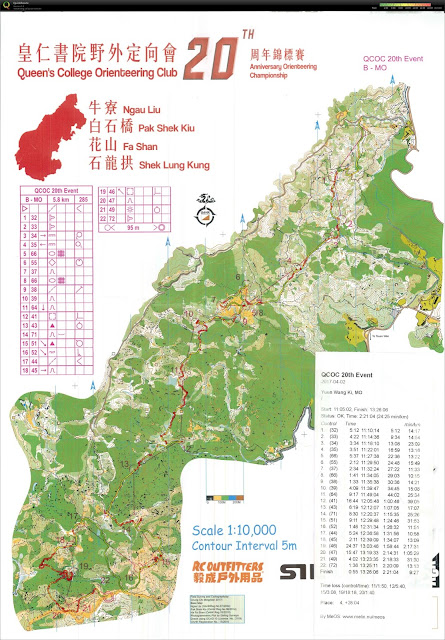 I felt I did pretty well in the first 9 checkpoints (controls). The first few points were stream-following. Then, there were several short legs. At #9, I only used 30:36. When getting to #5, I passed through a truly "refreshment station". Usually, a "refreshment station" means just "water station". This time, however, there were Gatorade and Coke besides water. I did need a cup of water and a cup of Gatorade to refresh myself, since I did not think I drank enough water in the morning.

I think I made a routine choice mistake to #10. I used the red line route, thinking that going back to the open land (blue line route) may not earn me too much time. However, I think I am wrong. Nevertheless, I don't think this would cause too much time loss. (Let's make a guess. 1 minute?)

Since then, I made more and more mistakes along the way. When going to #11, I somehow thought that the trail to the south was on top of the hill, so I went back up. However, it was not. Thus, I was at the top of a hill, fighting unnecessarily with the thicket. This was likely a 2-3 min mistake.

Then, to #12, I could not resist my urge to do cross-country, like how I did more in the US. I considered the safe trail route (blue line, right map below), but I was also curious if the course setter was aware of the route that I chose, and checked this route properly. The route that I used may not be too slow, since there was no need to go back uphill, and the route was direct. By comparing the unmarked map on the left and the marked map on the right below, I think I followed the intended route. My thought: the last 1/3 of that open land strip was fine, but the beginning 2/3 took me a lot of time to pass through. 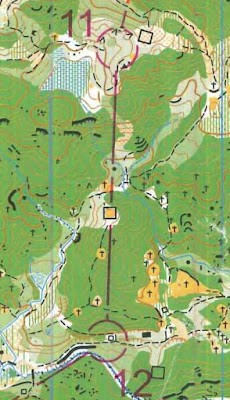 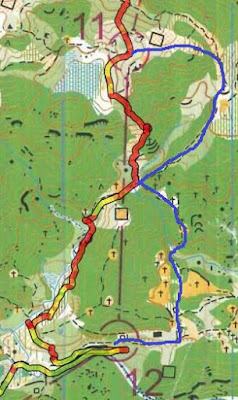 On the second stretch to #12, I tripped and felt a leg cramping. I then walked most of the time. After all, the trail was not very clear. I followed the stream instead. I guessed I made 7-8 min mistakes in this leg.

The trail that led to #13 was quite unclear. I thought as long as I observed the surrounding (first, a trail bend that I could see a big rock, and then passing through a marsh), I would find the point on the trail. However, I stepped in the marsh and could not find the trail. I saw several stone walls around, but the map did not indicate those. Fortunately, I saw a person walking fast, so I followed him to find the trail. That was 1-2 min mistake.

I got to another refreshment station with the similar choices of drinks. This station was situated at an abandoned school. See the Google Maps picture below. There was a stone slide!

When leaving #14, when I followed a trail and ran, I felt that something was wrong, since the compass pointed to a different direction. I stopped for a few seconds to diagnose that I went to a wrong trail, so I went back. I learned that one less-experienced orienteer went through the purple line (in the map below) all the way, before he found something was wrong. I told him that he should be able to identify the mistake faster. 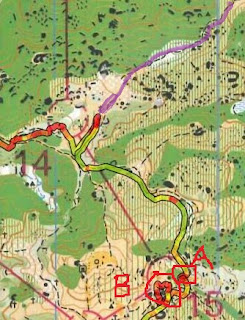 I did not do well in leg #15. First, at A, I tried to fight through the dark green unsuccessfully. I should have run around the wood (to the south) and attack back to the north. Then, at B, I forgot that the checkpoint was right next to the dark green wood, and went up too far for another large rock. The location of the actual checkpoint was quite well-hidden, if not knowing what to look for. I guess it was a 4-5 min mistake.

For #17, I recognized the blue route possibility, but I did not want to risk not finding the route in the end, so I took a larger red route. I wondered how many minutes were lost in taking the red route. I also noticed that by using the red route, there were many checkpoints along the way, presumably for the beginner courses. A good number of beginners were walking against my running direction. I hope that the course setter now realized that this possible route choice caused the beginner and advanced sharing the same route, which is not a good practice. 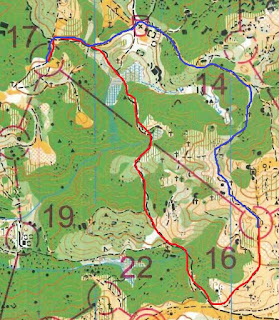 It was #19 and #20 that killed me. To #19, I wondered if anybody was scared of the wood, and took the light blue route. These people will certainly be faster than me. I was totally at fault for #19. I thought about going west a bit, and when I saw a trail going south, I took that route. I did not see that, but I saw the open area (circle A on the left below). That was still not too bad. I could just find a way to go south.

I did not go south. I went into the thick wood. I decided to keep fighting the wood until I hit the trial downhill. It was a long time before I found a trace of trail, so I kept going east, hoping that I could eventually see some buildings on the left. It was not only a long way, but at some point, I could not find the trail, and was stuck among large boulders. It took me a while to find that I did not go far enough to the east. Once I saw the buildings, I was finally relieved, but I could only use walking speed now. I bet this was a 19-20 min mistake. 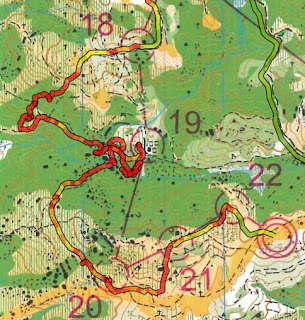 For #20, it did not make sense to go through any route except the route that I used. However, it was very difficult to find the trail junction (circled in B in the left map above). There were many boulders along the trail, and there was a river in parallel with the trail. However, how do I know where the trail could be found? it took me a while and some luck to find it. I even wondered if the end of the trail should touch another trail when drawing this map, since I could not see a clear trail among the boulders. However, once the trail head was found, the rest was not so difficult. I probably had spent 10 min to find this trail head.

The rest of the legs were fine. I was just tired. The result was something that I was not proud of. I felt that it was possible for me to finish this course within 2 hours.

When I got to the bus station, I met KK Yeung, a very experienced orienteer. He told me that the courses were overall quite fun, but he also noticed the opposite traffic flows for different courses, which should be avoided. In the FB group, some said that the winning time was too long.

Back home, I found from the FB group that someone was missing in the course area. This was later in news on the next day. Missing a person in an orienteering event is rare. In fact, it was the first time for me to hear such thing happen. When a person did not report at the finish before the event end time, the organizer would form a team to search for missing people, and seek assistance from the civil service groups from the government. Fortunately, the missing person was found at 1:30 am without injury.

Will this happen to be someday? I hope not, and I should not worry too much, since this was the first time that I heard missing in the woods happened in an orienteering event.

To summarize the performance of the organizer:

Things that do well

- the truly "refreshment stations" that offer different drinks
- the course is quite fun
- the efforts in dealing with unexpected events, including baggage lost in transportation and missing of a participant.

Things that can improve

- try to have just one event center, so that a family can come together.
- the course flow design and the winning time management

Thank you for organizing this long orienteering event!

(P.S. In the future, I do think about getting a sport camera. Hopefully, I could take the video when running the course, especially for sprints)
Posted by johnayuen at 6:52 PM