1.      The event
In the Thanksgiving weekend, I decided to go to Missouri to attend a 3-hour score-O event.  Hawn State Park is about 1 hour driving time south of St Louis, so it is quite far away from Champaign.  However, I had never been to Missouri to do orienteering.  In addition, this location featured some US national orienteering competitions in the past, which means the map can be challenging for navigation.  Therefore, I drove 4 hours to this place.
Because of carelessness, I was locked out of my car during the trip.  Although I eventually found someone to open the car door, that was an hour later.  By the time I got to the start point, I was already late for an hour to start.
I prepared to leave quickly, forgetting that I had not had food for quite a long time.  Then I found myself feeling hungry in the forest, forcing me to go back to the start as soon as I can.  They served snacks at the start point.
Therefore, I did not go far from the start to get to the controls, and the results were as expected. 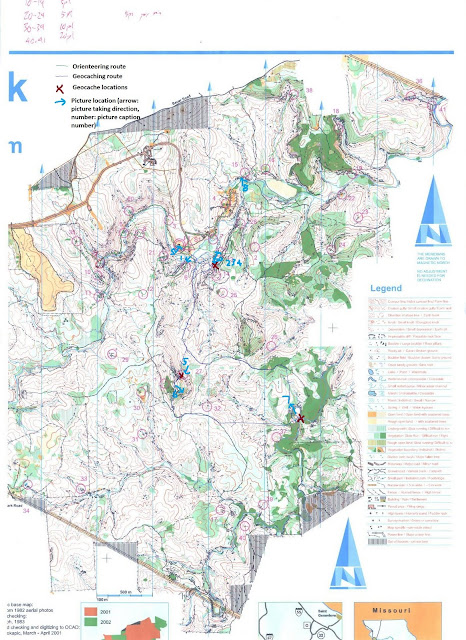 The map was really huge.  The map is in a scale of 1:15000, and the club only used half of the map to organize this Thanksgiving 3-hour events.  When I ran the area near the start point, I found a lot of rocky cliffs in this area, a terrain that looked new to me.
The scoring of this orienteering event was also quite interesting.  There are 41 controls that had point values distributed into 5 groups: the 1-point (control 1-9), 3-point (control 11-19), 5-point (control 21-29), 10-point (control 31-39), and 20-point (control 40, 41), but getting all controls from1 to 9 (all 1-points) would give you an extra 11 points.  On the other hand, each minute late would result in a 5-point penalty.  Thus, the bonus getting all 1-point controls was not much.  In addition, these 9 points were sparsely distributed, so it was challenging to visit all 9 points.
Therefore, this course seemed to encourage runners to visit controls as far as they can.
After people came back from the course, I found several familiar faces.  There were several from Chicago Area Orienteering Club (CAOC), such as Chris, Charlie, and Rich.  To my surprise, I saw Michelle and Brian from environmental engineering, too.  They had a family visit in Missouri, and came to the event to learn about orienteering.  Perhaps my previous presentation in CASE about orienteering helps!
After enjoying food and discussion, and some people began to leave, I decided to walk into the forest deeper and did geocaching.
2.      Geocaching
The first geocache was not too far away.  It was at a cliff 200 meters from the start point (between control 13 and 14).
After finding it and taking some pictures, I walked south to go to a place very close to control 27.  I met a person who was ready to collect the control 27 after the event, and he was interested in what I was doing, so we found the cache together.  The cache was near the top of the hill, so took more pictures of the surrounding area.
Then, I went farther away to find the last cache.  This cache was challenging because it was located deep in the forest with no trail access.  The cache was located close to a river.  I had to cross the river to reach it.
The hike for geocaches gave me more idea about the terrain of this area.  I thought I would come back again to this place to do orienteering if I had an opportunity.
Here is one more picture near the start to show you the rocky cliff feature.
After the orienteering event, I went to St Louis to try some toasted ravioli.  I also got a picture of the Arch at night.  Then, I started the long drive back home. 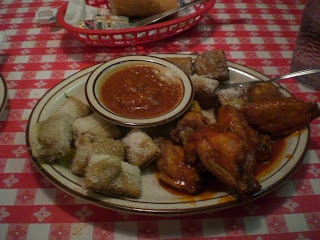 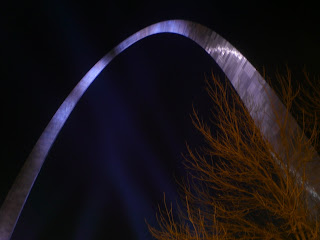