1. The event
On the day of my sister’s birthday, the fall season of orienteering began.  In the first trip, I paid a visit to southwest Chicago to run in another map that I have not been to – Waterfall Glen East.  Here I will only focus on the event itself.  There are many miscellaneous items to talk about before, during and after this event.
This is my first time to do a red course in Chicago.  It is the longest advanced course that is offered.  I hope I can get maximum experience in the wood by doing the longest course.  The length of this course is 7.4 km. See the map and result below.
I took a few pictures at the starting point to show how the orienteering events are organized in Chicago:
This course puts the first 6 controls on the south side of the map, and then another 6 on the north side of the map.  I did not have many memorable events in the first 6 controls because I can use roads, paths, or streams to lead to most of these controls.  The followings were my plan to tackle each of the control on the south side:
Start à 1:  Run open land at all time.  Use the main roads.  Use compass to locate control #1 when I got very close to that. 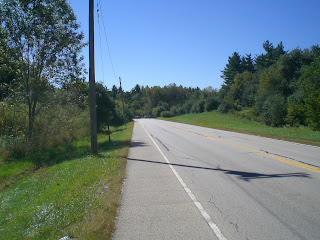 1 à 2:  Use the stream to go back to a trail.  Run along the trail until I went to a building, then use compass to lead the way.  Use the intermittent stream and contour to check how far I had run. (Note: using the indistinct path may shorten the route, but I cannot guarantee that I can find the path.  I decided to not take risk to increase my confidence of the area). 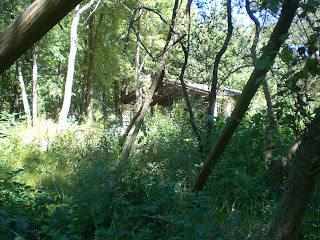 2 à 3: Go back to stream and use the stream to get on a road.  Run along the road and path until I got close to control #3.  Then use compass to lead myself to the control.  (Note: I got a little bit lost when I used the compass.  Fortunately, the small path at the far end as well as a distinctive re-entrant (i.e. a valley) helped me to reorient myself.  I finally found control 3 without losing too much time (perhaps I lost 10 minutes because of getting lost).
3 à 4: A short leg.  I can run to the path on the south and then reorient myself to find control 4.  Easy.
4 à 5: Use the trail all the way.  The part did help me to practice running.
5 à 6: Run the path for most of the time.  Pay attention to the major trail.  This is also an easy leg. 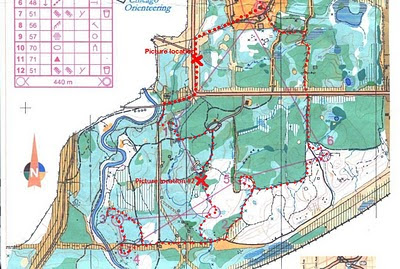 My major problems concerned with the controls in the north part of the map.  I certainly killed myself when going to control #8.
6 à 7: The orienteering nightmare began after I crossed the north half of the map.  I did not look at the compass and ran west instead of north.  I wasted time at open land area. 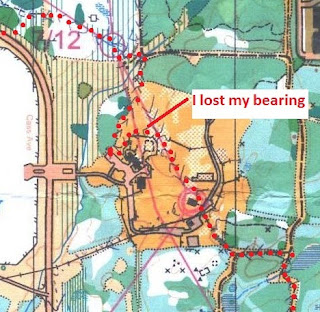 7 à 8: This is the feature story of this orienteering experience.
First I hoped that I could find the indistinct path.  It was unsuccessful, so I went back to the road.  I knew that I had to run quite a distance before I dug into the wood again.  Where I should go into the wood is a question.
Perhaps I should identify the bend of this main road?  The bend of the road is too gradual.  There were actually a driveway and a small structure on the west side of the road that should be really helpful in orienting myself.  However, as you can see from the map, the driveway and the small structure were not shown in the map.
Therefore, I entered the wood inaccurately at the place where the road started to get bent.  I hoped that if I went too far north, the stream above control #8 could warn me that I went too far north.
It turned out that using the stream as a catching feature (i.e. warning sign that I went too far) did not work out.  When I reflect what I did, I think the stream was dry and the stream looked like a major path.  In the map perspective, at the area a little bit south of control #8, there was a narrow clearing that I considered that as a possible path.  Therefore, I continued to go north to search for control #8.  I did not realize that I made a parallel error (i.e. I mistakenly identify my current location because I incorrectly identify the geographical features).  In the end, I went to the road in the north, and I knew that I wasted too much time on this control. 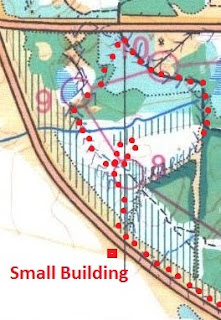 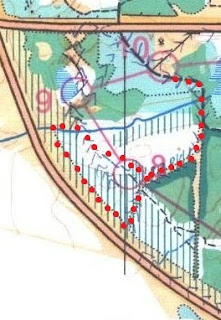 Even though I had so much difficulty in finding this control, I still thought that the location of the control was correct.
8 à 9: With this huge mistake in finding control #8, I guessed I should be familiar with northwest area of the map and should have no difficulty in finding control #9.  However, I once again went too far north and got on the road.  Therefore, I had to go south through the open land to get back to the marsh in order to retrieve control #9. 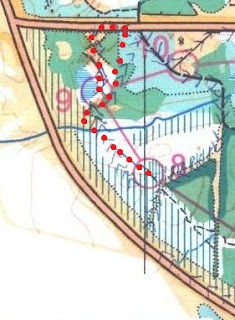 9 à 10: I knew how to get to it after the major control #8 mistake.
10 à 11: I already knew that I did not do well in this first red course, but let’s try to finish.  This control was easy, which was running on the road most of the time.
11 à 12: Another leg that practice running on a path.  Everybody should know that taking the straight line distance is not always the best bet.
12 à finish: I had run on this part before. 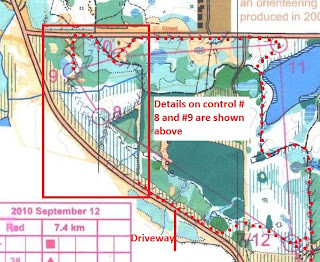 My first red course took me 2 hours 9 minutes to finish.  I guess I can consider this to be a time below average for me.  However, perhaps I should do several more red courses so that I can feel my average finish time.
Overall, I think I ran trails for the most time, so the red course was just long and not as hard as I thought (except control #8).  Perhaps this area has too much forest area that is not easy running (indicated by a lot of deep green on the map).
Moreover, I probably spread a lot of seeds along the course (see picture below).  This is probably the characteristics of orienteering in the fall.  Besides these spiky seeds, we also have spiky thorns.   Thorns had pierced me many times, but as long as I had fun in orienteering, I did not care. 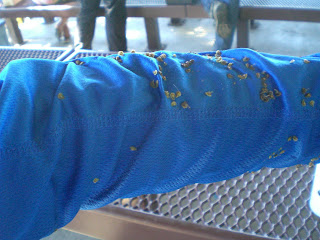 2. Miscellaneous
a. Geocaching
To increase the treasure hunt experience, I began to do geocaching on my way to Chicago, after the orienteering event, and on my way back to Champaign (where I live now).
What is geocaching? There are millions of secret containers hidden somewhere in the world.  Each container has its associated GPS coordinates.  Your job is to copy down the GPS coordinates from the geocaching website (e.g. http://www.geocaching.com/).  Then use a GPS device to locate these containers.  There are usually log papers in these containers so that one can write down what date the person has visited the containers.  Some larger containers also contain some items.  You may check http://www.geocaching.com/ for more details about geocaching.
On this day, I used an alternative route to go to Chicago.  Instead of I-57, I drove to Mahomet and used IL-47 to connect to I-55 so that I passed through western suburb of Chicago.  There were 4-5 geocaches that I planned to search along IL-47.
Then, I had two geocaches to find within the orienteering area.  I marked the approximate locations of these two geocaches on the map, too.  I met another geocacher who would like to find the same caches, so we searched together.
As a side note, I knew that my cousin just came to the US to do an exchange program for a year.  She was placed somewhere in Chicago that was very near to where I was doing orienteering (i.e. Bolingbrook).  At this point, however, I would not find her so that she can gain maximum experience in living with a host family.  I should bring her to Champaign sometime later in the school year.
There were some people in Chicago to meet after orienteering.  There was also some dinner time in Chicago.  I went back home in Champaign late in the evening.
Posted by johnayuen at 2:39 PM