After the final stage of Orienteering World Cup 2019 in China, someone mentioned online that several places in the sprint map do not follow the minimum requirement of spaces between building (0.4 mm on map).  This is 1.6 m in the actual world for 1:4,000 scale, a standard scale for sprint orienteering map.  This minimum requirement is important because below this distance, the orienteering competitors will find difficult to see the difference between a space and a line, thus affecting their decisions of route choices.  This issue happens in many Chinese village orienteering maps because there are many narrow pathways in these villages.

The following is the drawing standard for building according to International Standards for Sprint Orienteering Map (ISSprOM) 2019:

So, what if there exists pathways that are less than 1.6 m wide in actual world? One possible solution is to exaggerate the width of these pathways to 0.4 mm on map.  The figure below shows pathways that are about 0.3 m to 0.6 m wide, which is difficult to run through.  Yet, if these very narrow pathways are enlarged, should other wider pathways be enlarged, too?  Sometimes, the width of the pathways gives hints on where one runner is.  Moreover, these very narrow pathways may not be a good route choice because competitors cannot run inside.

Then, we have this type.  For the top photo, the width is between 1 m and 1.6 m.  The pathway can be run through easily, but the width is below the 0.4 mm on map requirement.  (Actually, I don't think the bottom photo has any problem.  The path is over 1.6 m wide, and that little gate may just be shown as a canopy on map with a bit of exaggeration, or not adding the canopy at all)

For these narrow pathways, I proposed the following:

1) Still exaggerate pathways if the width is between 0.8 m - 1.6 m, and they are just drawn as 0.4 mm width on map.  If these pathways cannot be passed, still give olive green (impassable area) as usual.
2) For pathways below 0.8 m, introduce lines between buildings.  These lines mean narrow pathways that are too narrow to have thickness, but they have the potential for passing. Something like this: 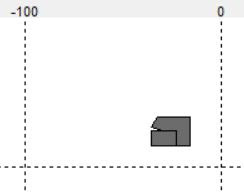 These lines are shown to signal the competitors that: there is a pathway that is too narrow.  It is not worth passing through it.  Pass at your own risk.

To show that the path cannot be passed, add short purple lines on both ends to show they cannot be passed. Now there is a flexibility for the mapper to indicate whether a narrow pathway can be passed or not. 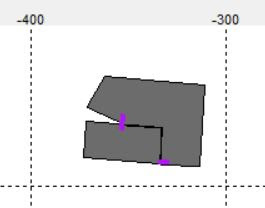 Please feel free to give comments!
Posted by johnayuen at 3:22 PM