After about a month staying in Hong Kong, I went to a swing workshop in this weekend, taught by Nalla and Jessica from South Korea. It costs HKD 1000 (~USD 125) for 6 sessions totaling 8 hours of classes. I began to accept the fact that such cost is reasonable in Hong Kong, seeing the cost of place rental and inviting international-renowned instructors. Before the workshop, they came to the Friday social. Nalla showcased his DJ set that I found amazing. 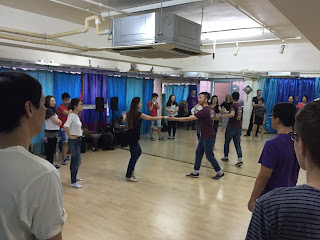 My comment after the workshop: I was happy to pay such money. All sessions have common themes that I agree on. They are:

1) Swing dancing is not about memorizing a routine.
2) Feel free to experiment on the basic moves, including changing the footwork, rhythm, and contrast. (Assumption: you know the fundamental techniques)

Thus, the class has many lindy swingout variations. I was revisiting scissors kick that I found a hard time to do last year in another workshop. Now I feel better. Then, there were legs circling around, and legs crisscrossing behind. The class also explored many variations of Texas Tommy. There were swingouts that go around 360 degrees. I found some moves manageable, while others may not be easy for me at the time of the workshop, but I believe I can do it with more practice.

Part of the workshop points out the stylistic difference between Savoy style (fyi: Savoy was once a ballroom in New York, where lindy makes it famous) and South California style. The former looks more stretchy, while the latter relies more on counterbalance. This makes me think about West Coast Swing, which looks less dynamic, and may relate to the more "polite" look of the South California style. After all, West Coast Swing is the direct descendant of lindy. 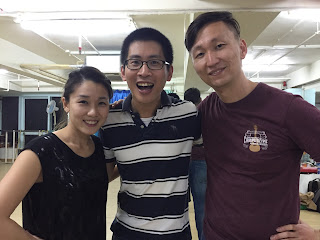 Other than the workshop material, I sometimes kept an eye on the instructors' son. He is probably 6-8 years old, but he could stay in the four-hour workshop each day, watching his own videos. He seemed to be entertained enough by himself. Sometimes, I wondered if I should say hi to him to make him feel less lonely, but it looked like that is not needed.

Someone already talked to me about finding a time next week to review the workshop material. I found this to be a good thing that a Hong Kong swing scene tries to organize. Six months ago when I came back to Hong Kong for an interview, I saw a workshop review session that I was thinking of joining (although it was later cancelled). I hope there will be more people joining such workshop review, so that some secrets of these moves can be (re)discovered.

I hope that I will see them again in the future. Perhaps this will be one reason that I will visit Seoul.

Nalla and Jessica gladly allow us to share the following video that includes two session of class material! In some sense, I was happy that they were generous about opening up such class material. In another sense, I wondered what caused them to be generous, seeing that they are dance professionals and they rely on the planning of these material for a living.

* Note: the instructors have explicitly mentioned that the following videos can be shared.

Posted by johnayuen at 1:17 AM