The story once again begins when I was in Hong Kong in June, when I received Facebook invite on this event. Seeing that the early bird price is not too expensive, and I have not been to any Salsa workshop before, I arranged the trip quickly, including finding an Airbnb place to stay.

The only non-lindy dance workshop that I have been to was years ago in Chicago for West Coast Swing. Now, looking back to the name of that workshop: Swing City Chicago, it makes me wonder why the swing world is so confusing. If not examining closely, one would not know whether the swing refers to West Coast Swing, East Coast Swing, Vintage Swing (e.g., lindy), or perhaps Ballroom Swing. Outsiders will probably do not know that each of the above swings has very different techniques (e.g., connection, pulses). To extrapolate, the University of Illinois has a club called Illini Swing Society. Should we make the name of the club clearer?

Back to Salsa, on Friday evening of the workshop, I went to the social dancing in downtown Indy called Riolo. I was here just two weeks ago for the Saturday late night dance of SwingIN (referring to Vintage Swing). I did not know anybody doing salsa in Indy except Susan, who used to be in the salsa scene in Champaign. Thus, I tried to dance with everyone, feeling that they were at different range of levels. In one extreme case, I felt after the dance that my level of dancing cannot harness this follow's ability. I wish I could dance with this follow again, but I guessed many people would like to dance with this follow also (sidenote: in SwingIN, I also got such feeling when dancing with a couple of advanced follows).

I did the same thing on the Saturday evening dance. After having several dances, however, I got the feeling that it is easier to ask the beginner- and intermediate-level follows to dance, but harder for more advanced follows. There are usually times when I, as a lead (or follow sometimes), would like to challenge myself by dancing with people better than me. However, they are either popular (people are in line asking for them to dance) or tired (need to skip a dance to rest). I did not dance for several songs just to hope that I could dance with a follow better than me. I hope that such reality would not deter me from asking more advanced people to dance. Days ago, I read from a list of comments about elitism in dancing. I agree that many of the elitism in the dance world is perceived (see the underlined text for why). To conclude that someone is a snob requires a burden of proof. Still, I guess the perceived elitism, whether it is real or not, may already scare beginners away in asking more advanced dancers to dance.

Each evening, there were a couple of performances. They are simply amazing. 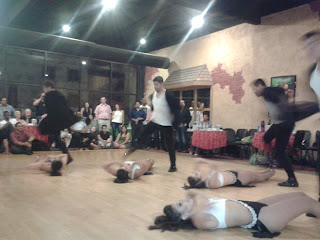 Such performances reminded me ballroom dancing performance in the past, when professionals wear costumes. I had some unorganized train of thoughts about how feminism activists would feel about this. Somehow I felt that the female rights are more respected in the world of swing. I am not planning to dig into this topic further. I do feel that I like vintage swing more than salsa, and perhaps gender stereotypes are one of the reasons. I would just give an example: it is rare to see a guy as a follow in Salsa (except for the advanced dancers, which I have only seen once in the evening dances). 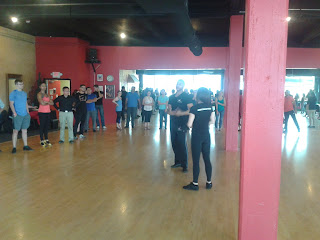 They are my favorite instructors (besides their amazing performances). Although they taught a sequence of moves, these moves highlighted certain techniques in executing them. The sequence was not too long, so they had time to dissect these moves in details. These moves were also challenging while manageable, possibly because of the previous statement. Their class concerning the partner connection in salsa was excellent.

One concern of salsa classes is that too many moves are included, and students can do them as a routine, but cannot lead them as individual moves. I think it is because technique instruction is not adequate. Years ago when I paused my swing, I kept thinking how the techniques learned in swing can be transferred to salsa. It turns out that many techniques are universal to partner dancing: provide resistance opposite to partner's moving direction. These words once again were heard from their workshop.

(Dance technical note: In a lindy swing out, the feeling of maximum resistance happens at count 4, when the follow cannot go further back because the lead's arm resists the follow's backward movement. I do find that a lot of beginner follows fail to resist the lead's arm, so they do not feel the leads changing their direction to go forward. Similarly, in a salsa cross body lead, the feeling of maximum resistance happens at count 3, and the principle of resistance on both partners is the same: to change the movement direction from in place to forward) 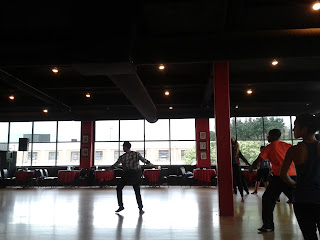 His salsa sequence was more challenging, partly because this sequence is on-2, which is not what I am used to. Most places teach salsa on 1, where the left foot moves forward first. However, the salsa in New York is mainly on 2, where the left foot moves backward first. I think I can do the whole sequence with practice. He probably overestimated the ability of students in the room, and played pretty fast songs for our practice.

This guy can really spin. There were a solo dance class and a spinning technique class. These classes looked good, although I was too tired to keep spinning.
Posted by johnayuen at 4:16 PM