When the event details came out, I saw several gimmicks that attracted me to come.  Although the drive was long (5 hours), there was a lodge that cost $99 for 5 people, including three meals.  There was a sprint course on Friday and a 3-hr Score-O on Saturday.  The map of Shirley Quad itself was also interesting.  The map was quite old (published in 1991), but this was only the third time in use.  For the first time, I saw a map where magnetic north is not pointed upwards.  In the 3-hr Score-O, there were two separate maps with two different scales.  This event was just interesting in many ways.

The four people were Boon Chong, Ramreddy, and his friends Subbu and Rajkumar.  We left Champaign at 9am on Friday, the day after thanksgiving.  I introduced Ariston Café in Litchfield, IL for a meal.  It was an old restaurant on the historic Route 66.  We passed through St Louis.  Then we still had 2-hour drive to the remote Mark Twain National Forest.


Once we arrived at the lodge, the time was 3:45pm.  We hurried to find the start point of the sprint, since we concerned that the course will close soon.  When we got to the start point, we knew we had time to prepare to start running.  Nevertheless, my other friends were ready to start, but I needed to change my shoes for running. 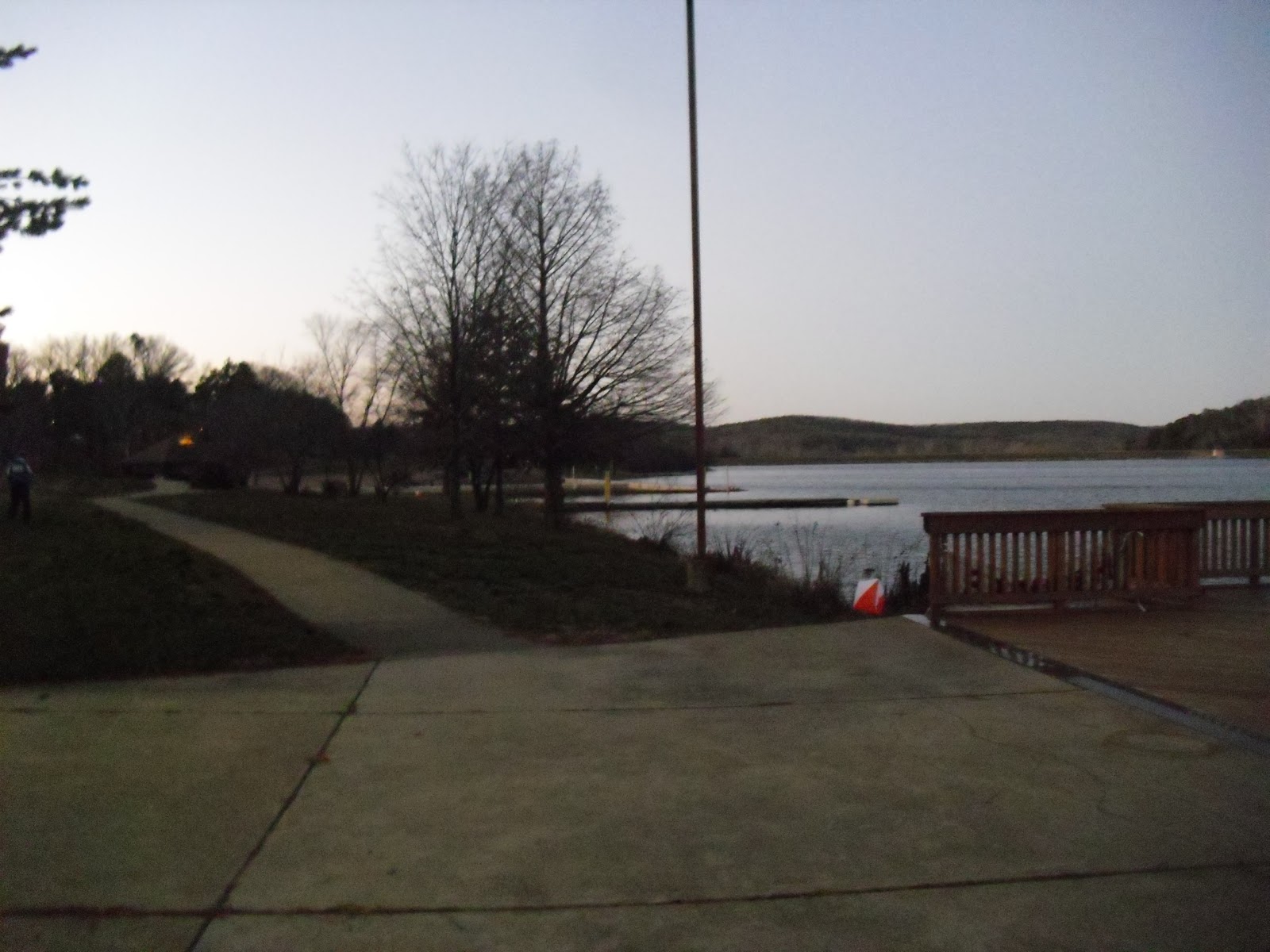 The course was quite tricky.  There were several control points that were very close to each other.  I was trying to run as fast as I can, so I saw Ramreddy and Boon Chong on the course.  They were amazed that I was so fast.  I had not seen Subbu and Rajkumar in the course (they did the course together).  Since this was their first orienteering experience, I hoped they did not get seriously lost. 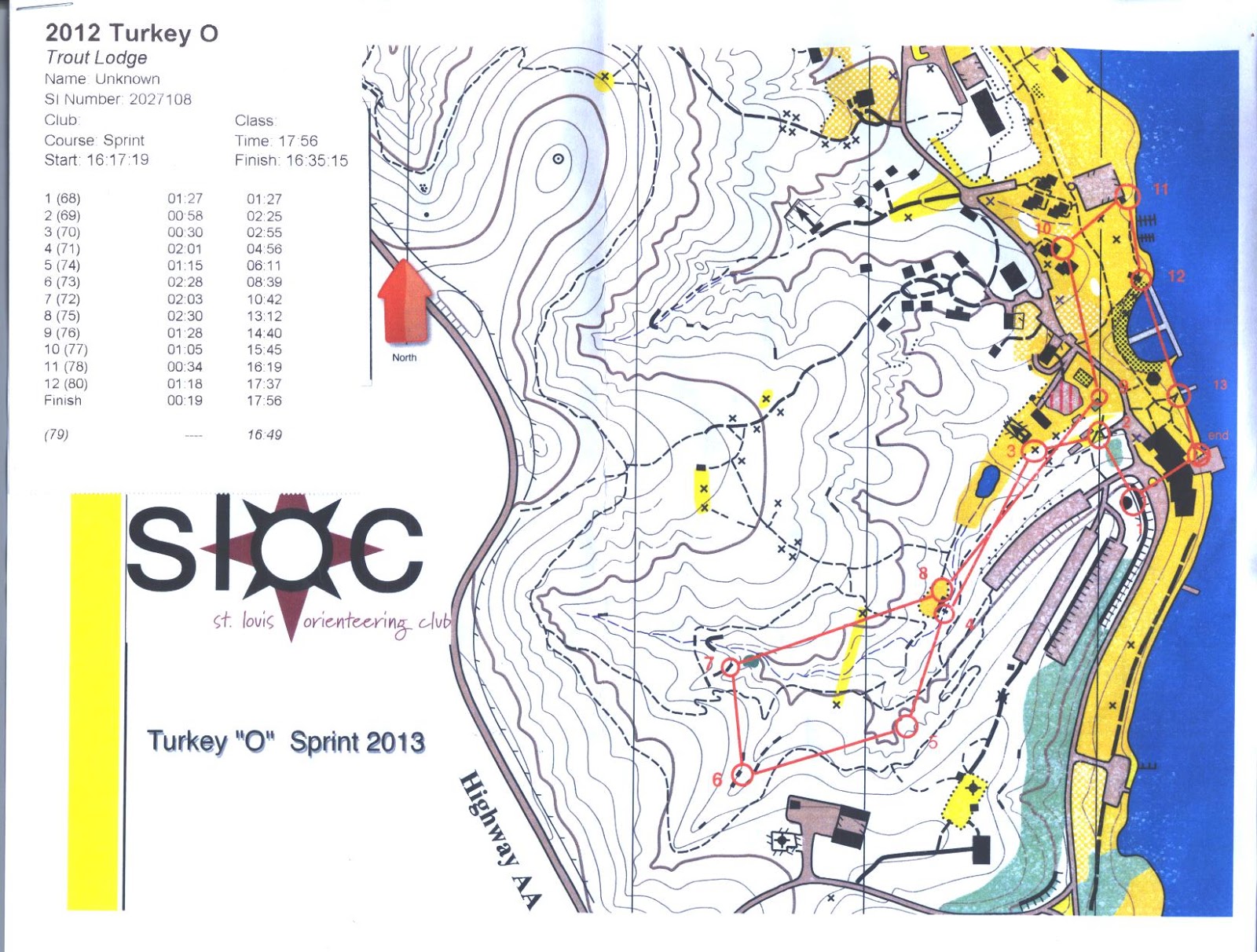 Below is my GPS watch data for the sprint. 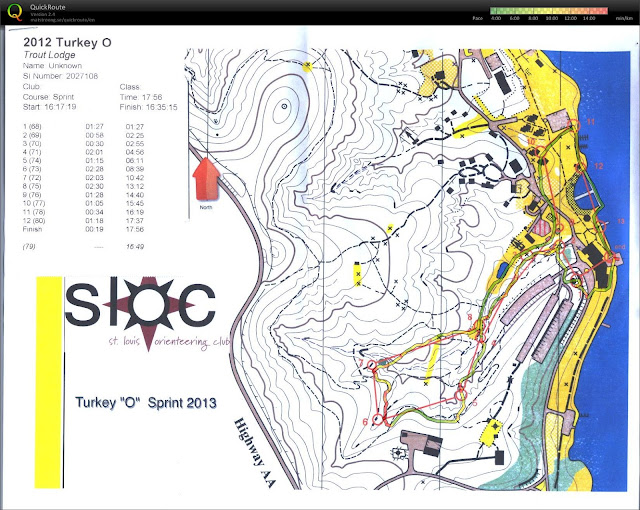 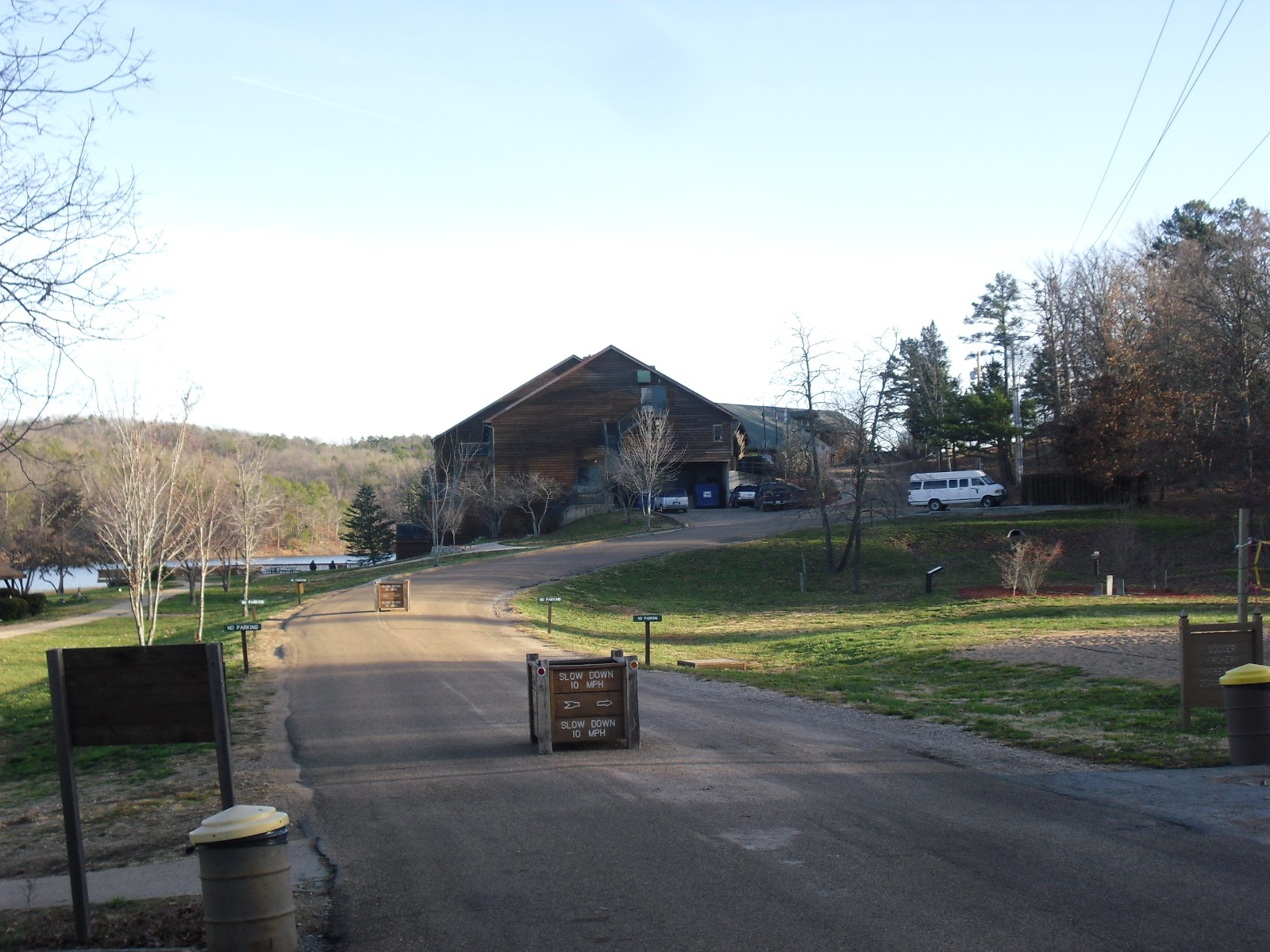 After crossing the finish line, I went to the reception to check in the lodge.  The lodge was warm and cozy.  With the cold weather outside and the warm fireplace inside, somehow I felt romantic at this place.  There were also family games all over the lodge.  This lodge was a nice holiday location. 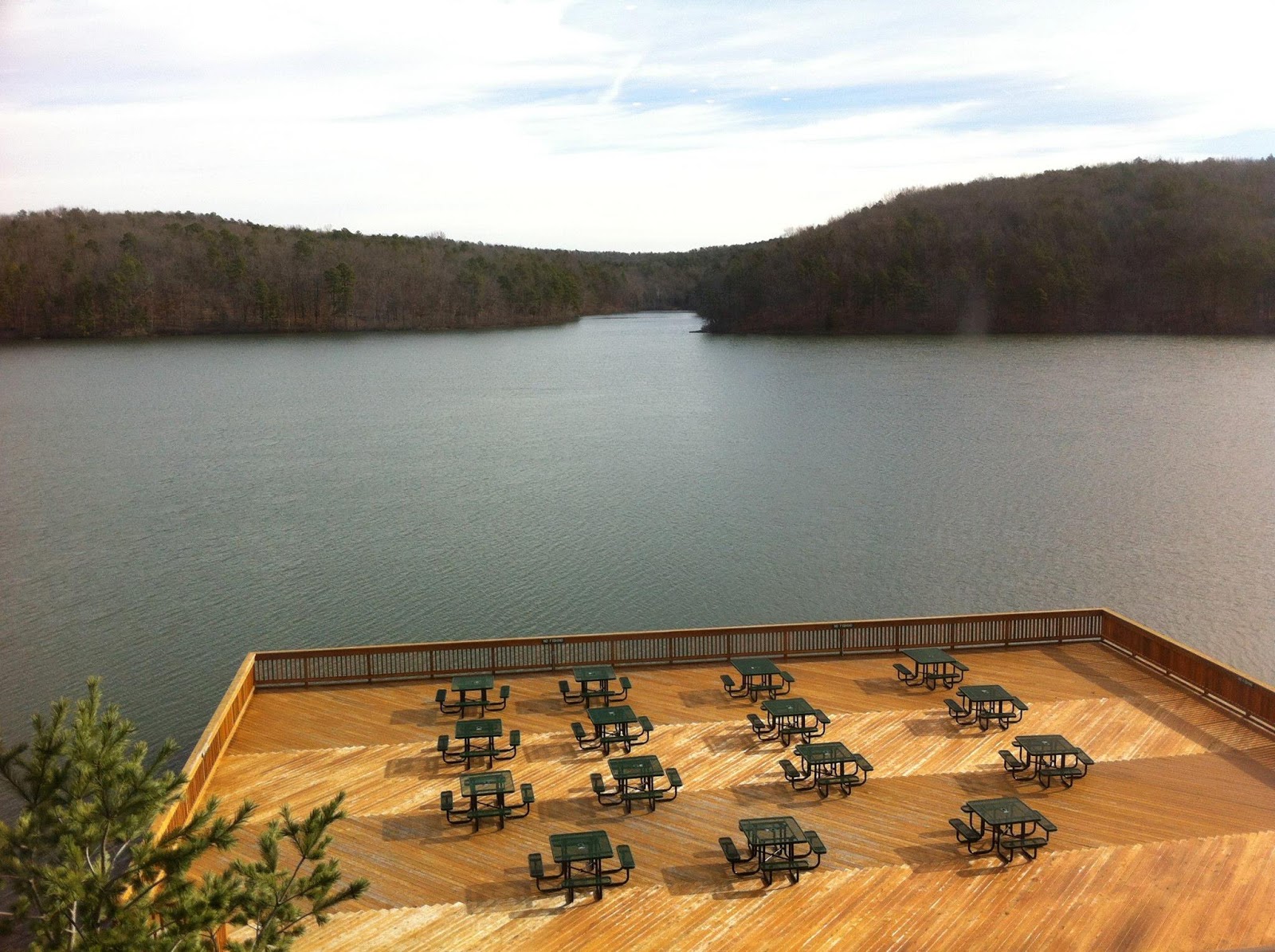 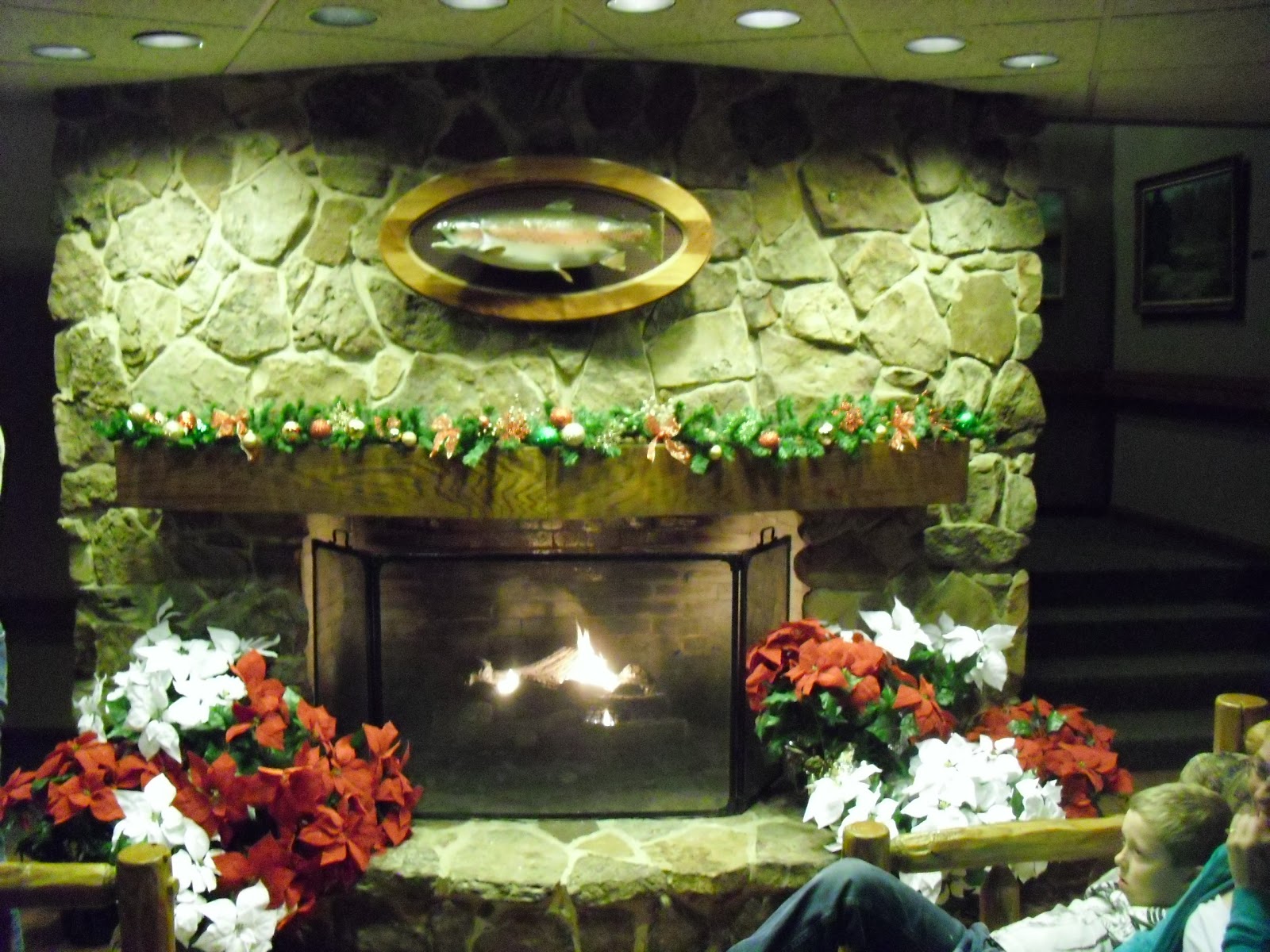 Our room had two queen-sized beds.  The room was in a hotel standard, but the room was inexpensive.
When all of my friends were back to the lodge, the sky was dark.  We explored the lodge, and it was actually small.  After we had a buffet-style dinner, we were informed that the 3-hr score-O map would be given after dinner. 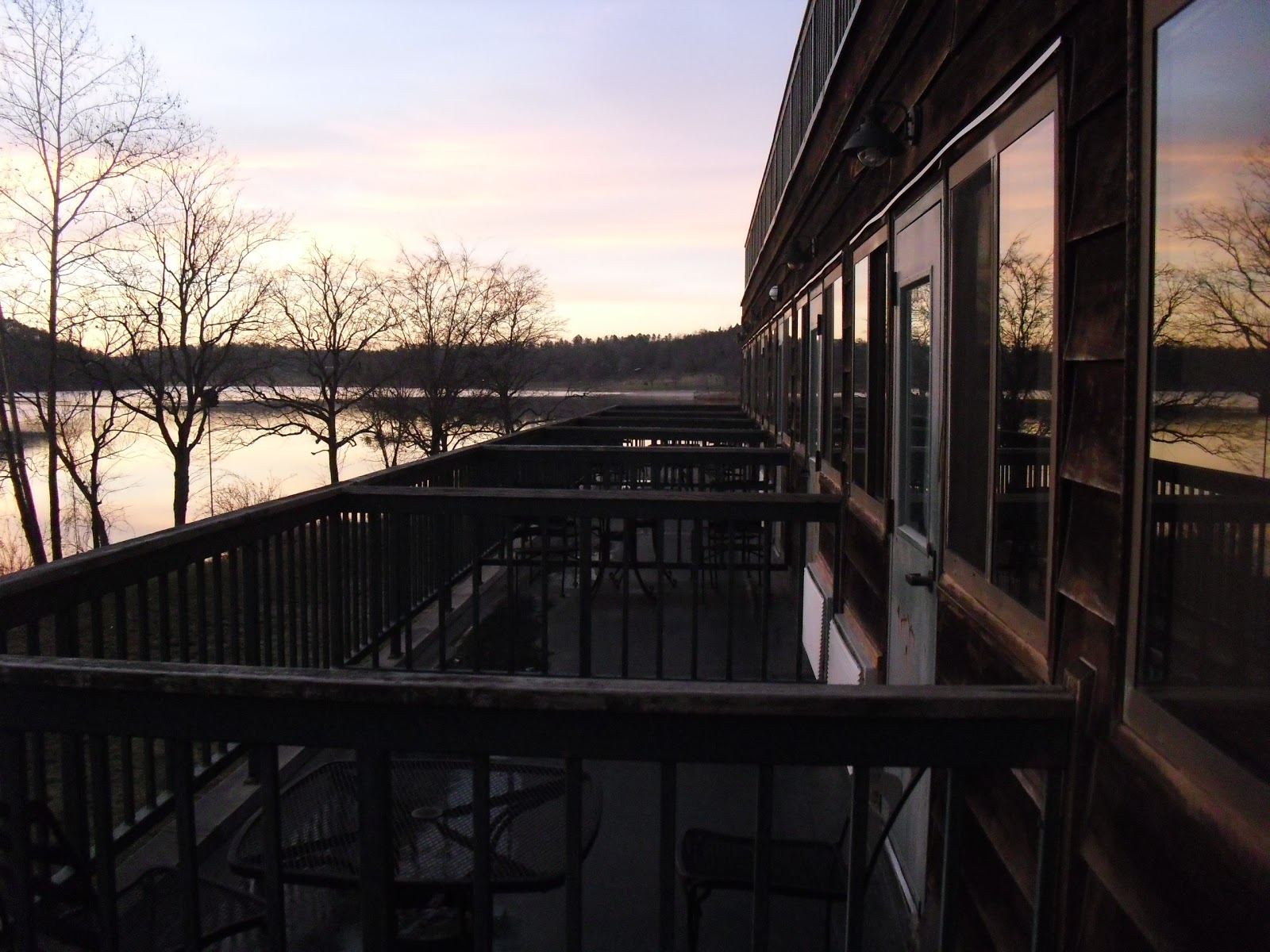 During the dinner, I also found the many people in Chicago Area Orienteering Club (CAOC) came down to this place.  Chris, Charlie, Natalia (Champion of the World Master Orienteering Championship three years ago), Maricel (the fastest runner in the club, Natalia is his coach), Jeff (who wants to beat me in orienteering), Patrick, and Victor were all there.  I showed them the sprint map, since they just arrived.  A drive from Chicago to this place will probably take 7 to 8 hours. 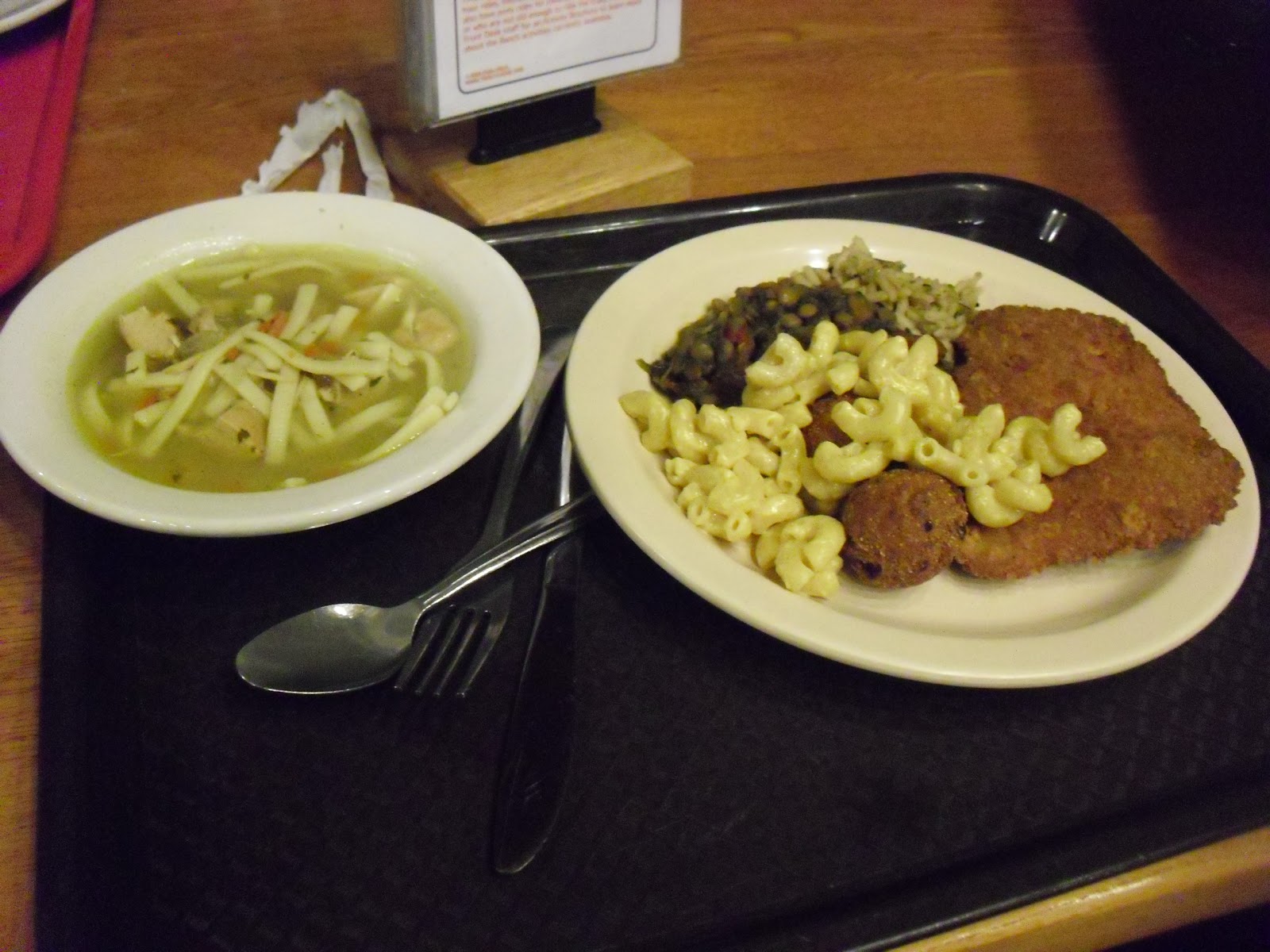 We were given two maps.  One map was the area near the lodge, with 7 control points already marked on the map.  The other map was Shirley Quad, and we were provided a blank map.  We had to copy the map.  Besides circling 29 control points on a huge map, we also needed to update the trail information on the map because the map was old.  There were some trails disappeared and some were newly created during these 20 years. 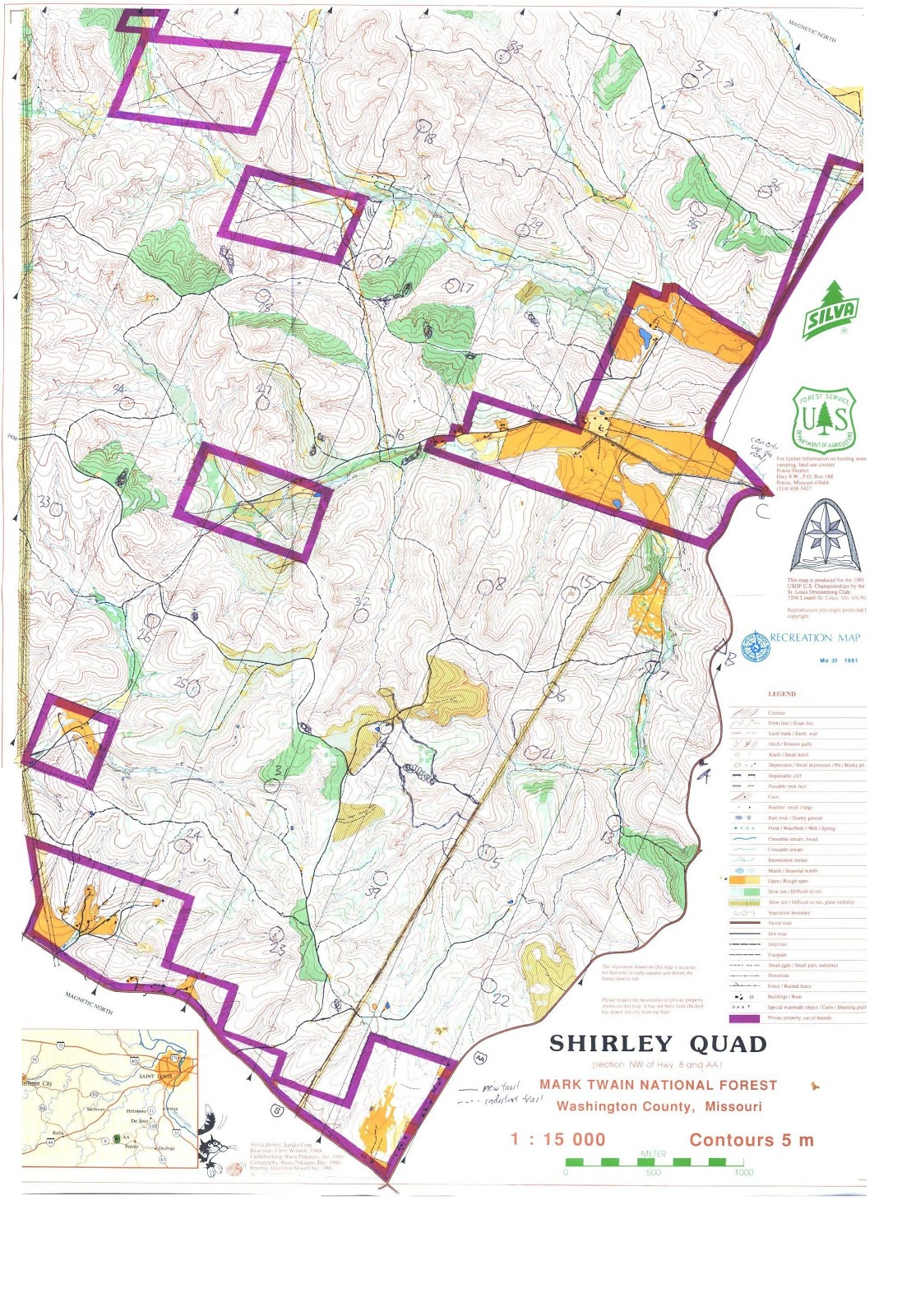 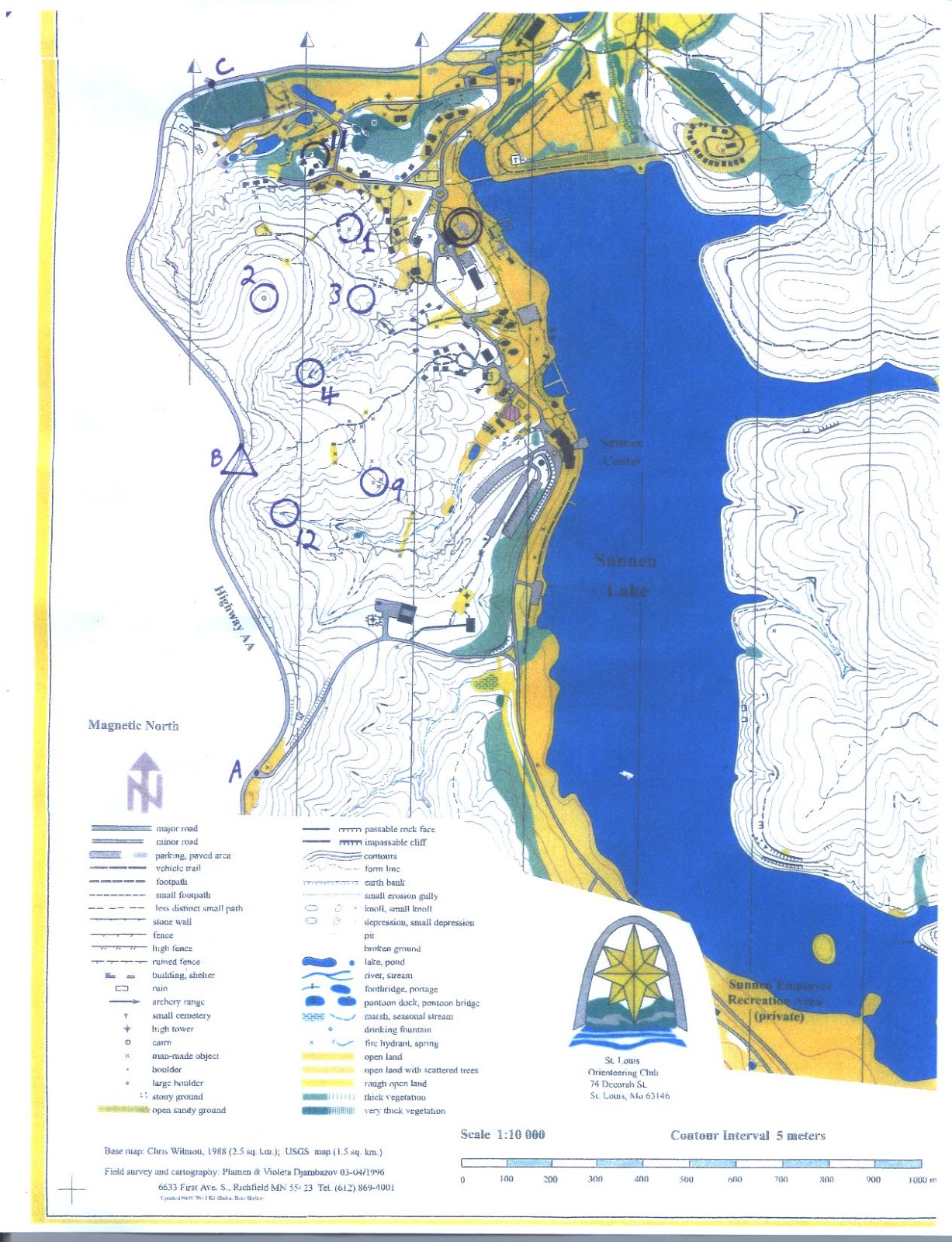 As a reminder, a score-O is a race that has a time limit (3 hour in this case).  Each control point has a score.  Usually the farther and more difficult the control point is at, the higher score the point is.  Racers can grab as many points as they want in any order.  The key is to finish the race on time, since the penalty for being late is steep.

The point distributions are:

After completing the copying, we started to plan the route.  I was quite worried about my friends, not too sure if my friends were too confident in finding controls.  I not only needed to plan my route, but also need to know if my friends plan a route that was too ambitious for them.   The good thing was: we had a night to think about our best route for the 3-hr Score-O the day after.

At first, my dream route would be the following: 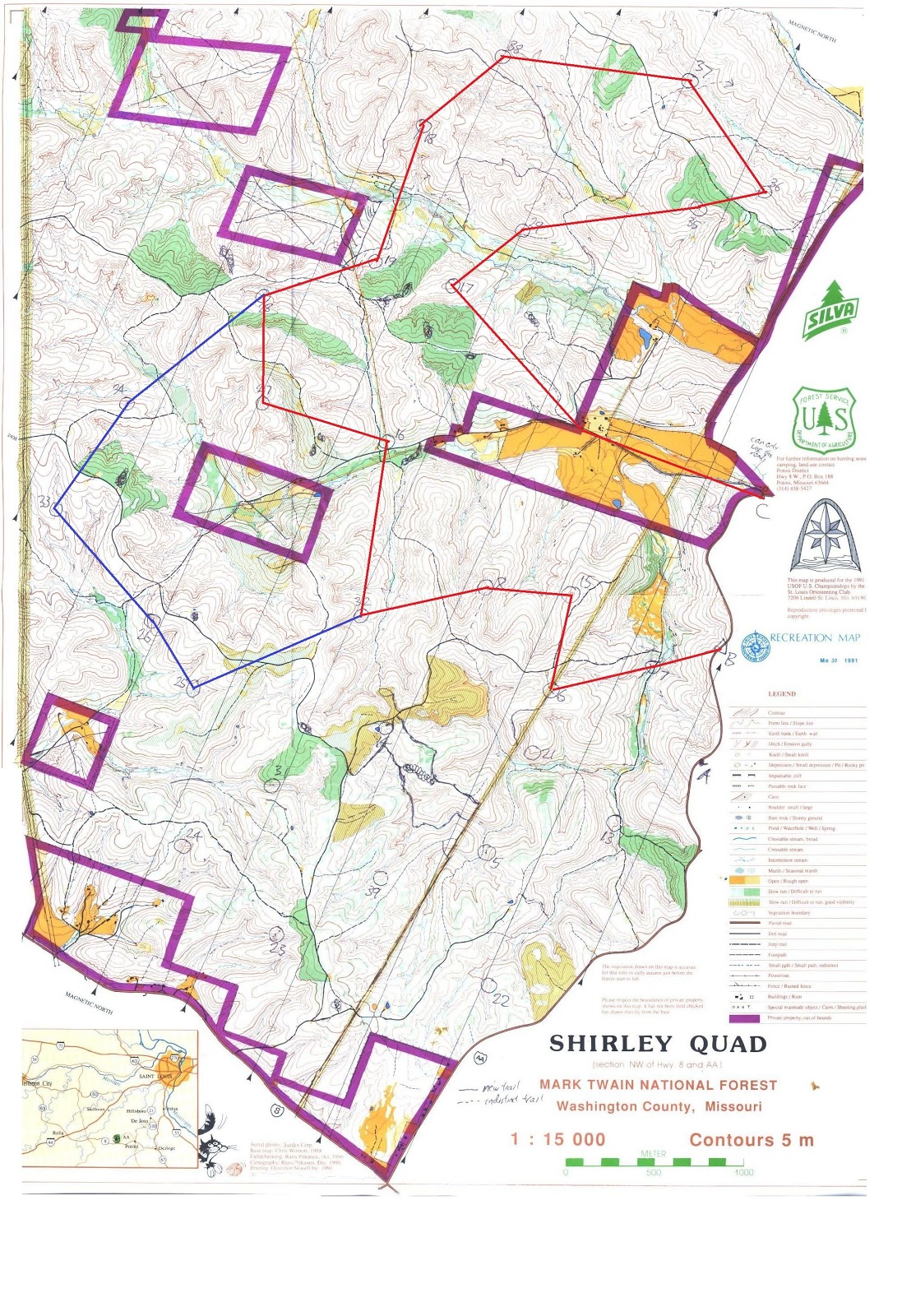 The control points in the north part of the map look attractive.  There were 4 40-point control points clustered in this part of the map.  However, the routes that can reach these points were limited, thanks to the restricted areas nearby.  I also had thought about a more ambitious route (extended by blue lines).  However, the route looked too long to me.

I tried to fine-tune the route.  Another way was to find the controls in the north counterclockwise.  That was what Maricel, the top runner in CAOC, chose to do.  He told us his plan, which was all in red lines.  He really tried to get as many 40-point controls as possible.  However, this could not be my plan.  The route was too long for me.  In fact, by getting to control #19, the distance covered was already 10 km.  This distance would take me 2 hours to complete for this terrain.  I also did not have a lot of flexibility to change plans if I had a bad day in finding controls.  It seemed that there might be a better route. 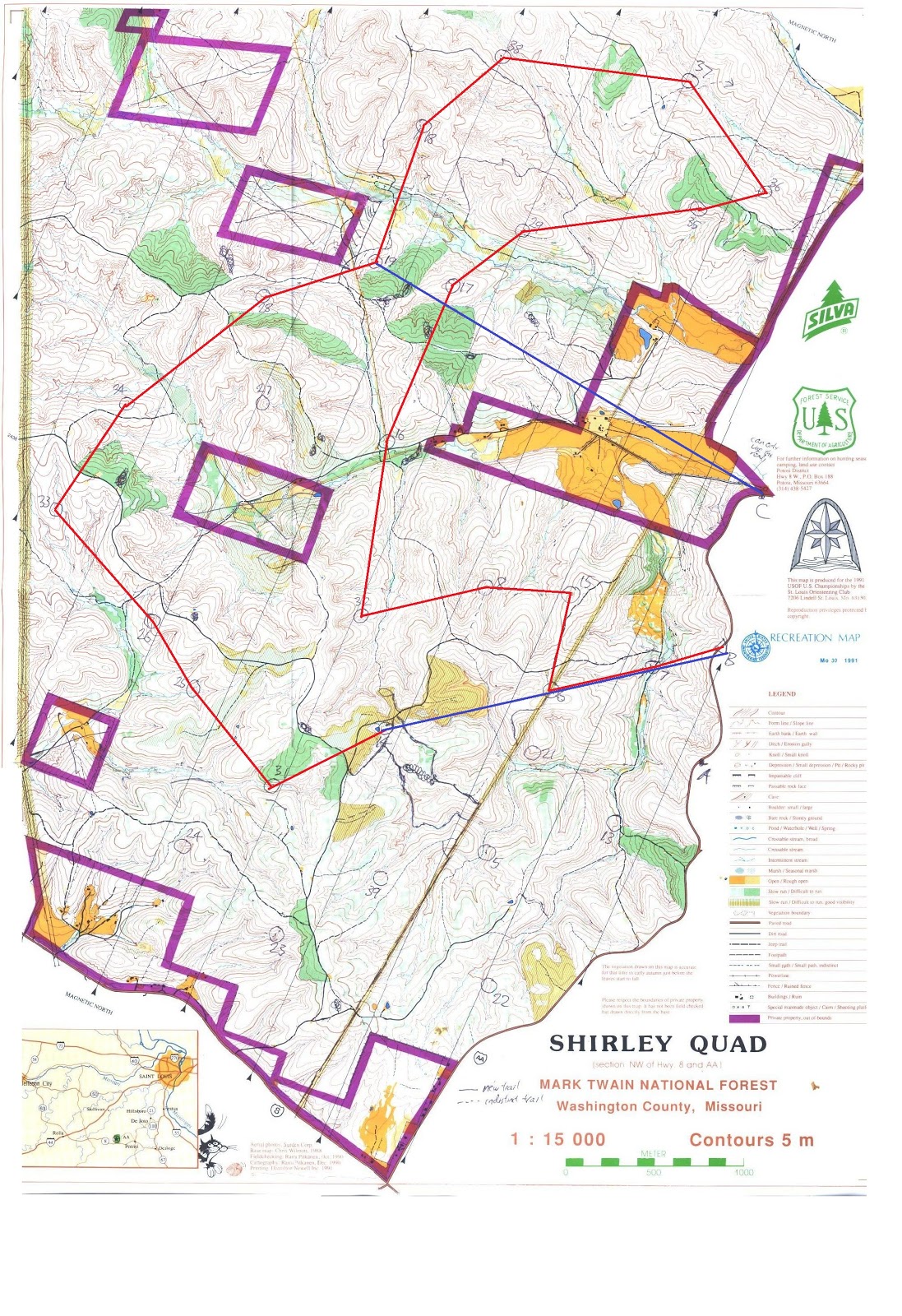 In the next morning, I tried to think if it was better to only get to the control points in the south part of the map.  It turned out that not only there were more score points in the south, but the route was shorter and I had some flexibility in the later part of the route (see blue lines for possible sidetracks of routes).  Therefore, I was satisfied with my final plan. 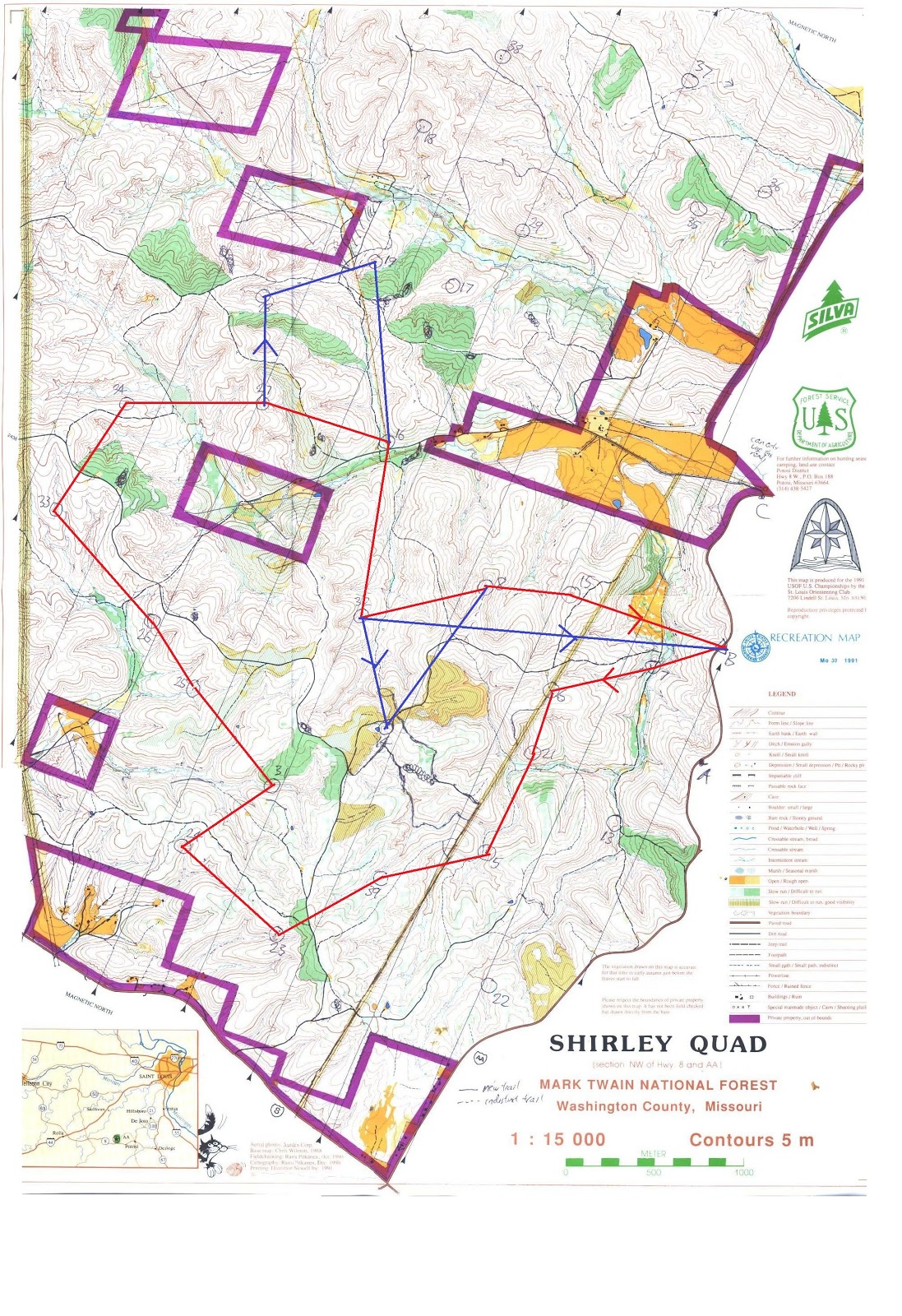 I needed to think about my friends also.  Two of them were first-timers, and I was concerned that there route might be too ambitious. Therefore, I marked the area in red that beginners should stay at, and in blue that the beginners might feel safer.  They should attempt all points in the smaller map, of course.

On Saturday, the day was cold.  Since the lodge was facing east with a lake, I tried to take pictures of the sunrise. 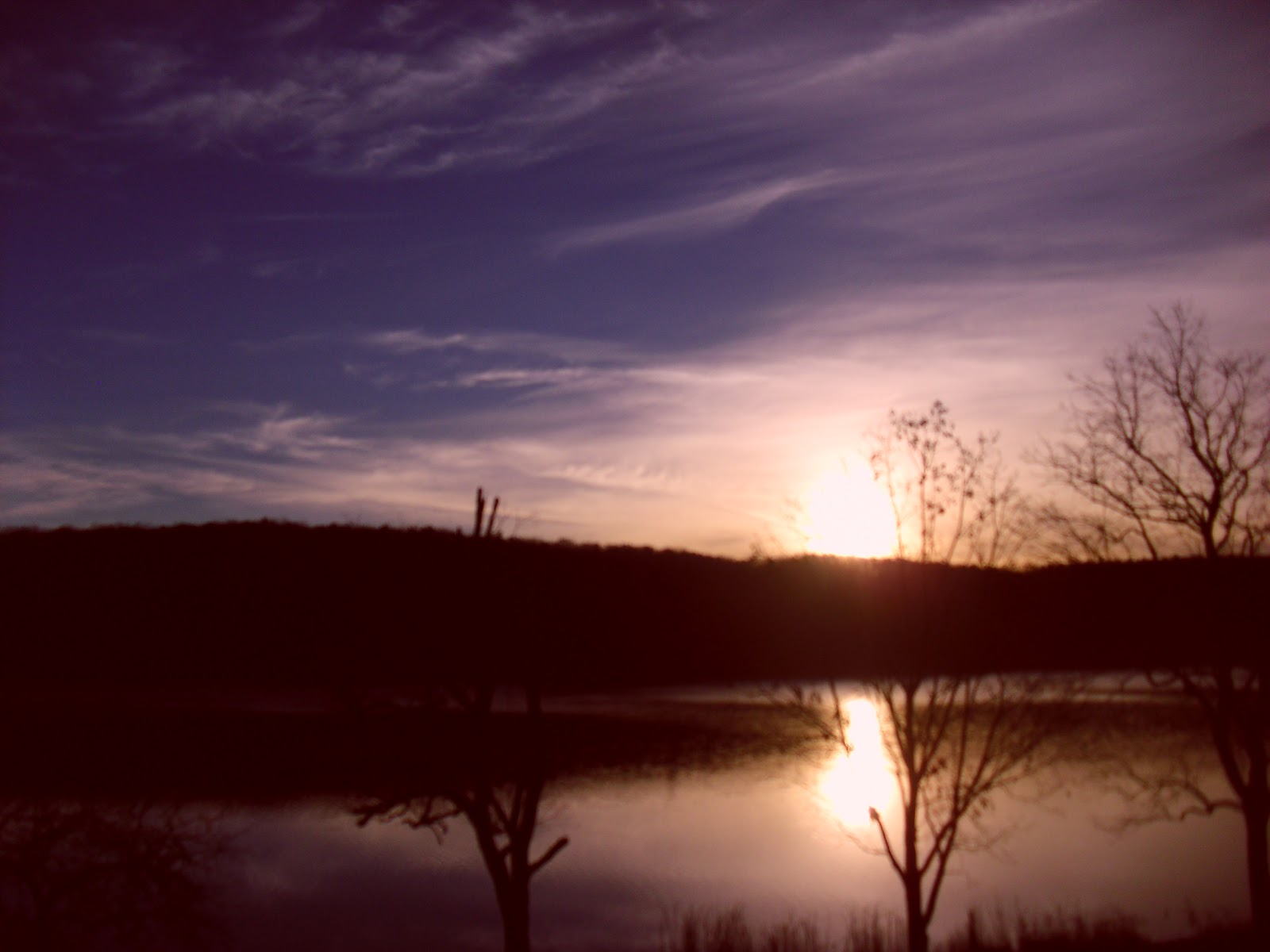 It was a cold day.  The temperature was below freezing point.  Fortunately, we could inside a building before we started the race.  Moreover, the finish point was next to this building.  I grabbed a banana at the cafeteria after breakfast and planned to put it in my pants pocket so that I could have food during the 3-hour score-O
The race started at 11 am.  Boon Chong took some picture of us a few minutes before we started.  We were using traditional punch cards.  Hopefully I would not lose my punch card, so I stapled the punch card on the map.

Once the race was started, many people ran down on the re-entrant (big gully/valley).  I think everyone went to control #7 first.  After this control point, I did not see people as often.
I felt quite well in the early part of the race.  Then after leaving control #39, I made a big mistake.  I knew a safe way to the next control (i.e. go back to trail on the south side), but I decided to take a more challenging way (i.e. use the reentrant system to bring me to the road on the west).  I got on the road.  I saw a trail going northwest.  I made a mistake by running on this trail.  Around that segment of the road, there were two trails that were going in northwest direction. I went on the north one and not on the south one.   This error took me some time to figure out.  This was the beginner mistake!

Then, when leaving control #24 to # 31, I made another mistake that was quite epic.  It was another parallel error.  This time I did not recognize the directions of the reentrant system, so I was running in the wrong reentrant!

After leaving #31, I found that my banana in the pants pocket burst inside, forcing me to finish the banana quickly.

It was good that I did not make any more epic mistakes for the rest of the race.  However, my legs started to feel tired at control #27.  At that point, I only had 45 minutes left.  I did not want to climb that hill after leaving control #27, but because of the restricted area, I played safe and went uphill.

I successfully attempted to find control #32 also.  At this point, I only had 30 minutes left.  Given the pain of my legs, with the potential of cramping, I did not attempt the rest of the controls unless the control was on my way.  Still, I needed to climb two hills and cover 3 km of distance to get to the finish point.  I tried to run when the road was leveled or downhill, but I could not sustain my run.  At the second hill, one of my legs was cramped.  I needed to sit for a minute before I could move on. 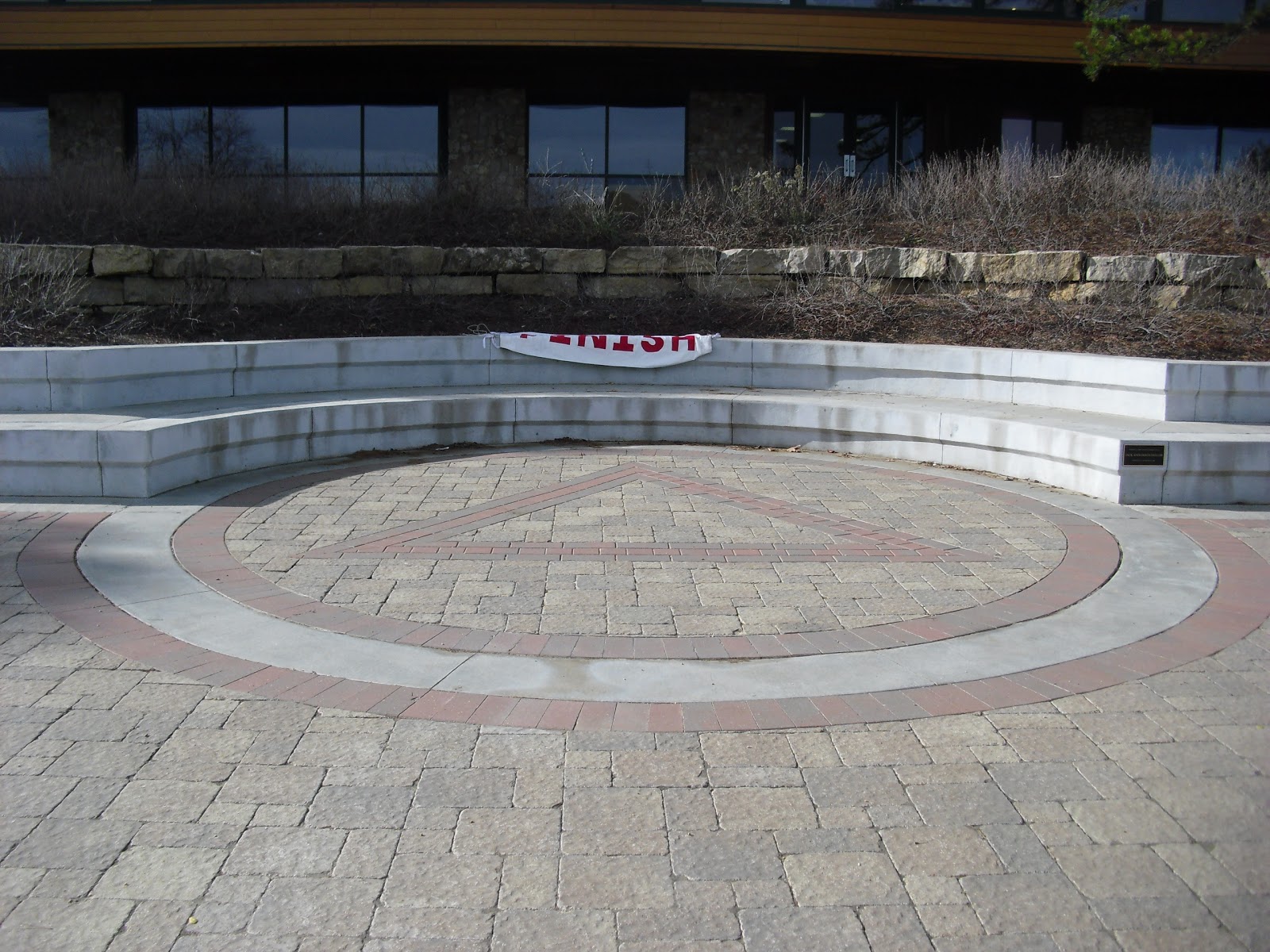 It was good to see that Boon Chong welcomed me back at the finish point, meaning that he was on time.  Only one of my friends was late by 2 minutes.

There was food right after the event.  I thought I ate a lot of food.

I counted how many points I have got in this race: 440 out of 900. I jokingly told my friends that I failed the test, since I still did not pass the 50% mark!  However, from the preliminary results, only three people got more than 450 points.  The first place, who was Maricel, got 700 points.  So, was I in fourth place? It was unbelievable because I made some epic mistakes in this course, and my long distance running was not as good recently.  It turned out that there is one person who got 450 points, and that was Natalia, so I was unofficially in the fifth place.

Our group took some group pictures and went for some gift shopping before we left this beautiful place. 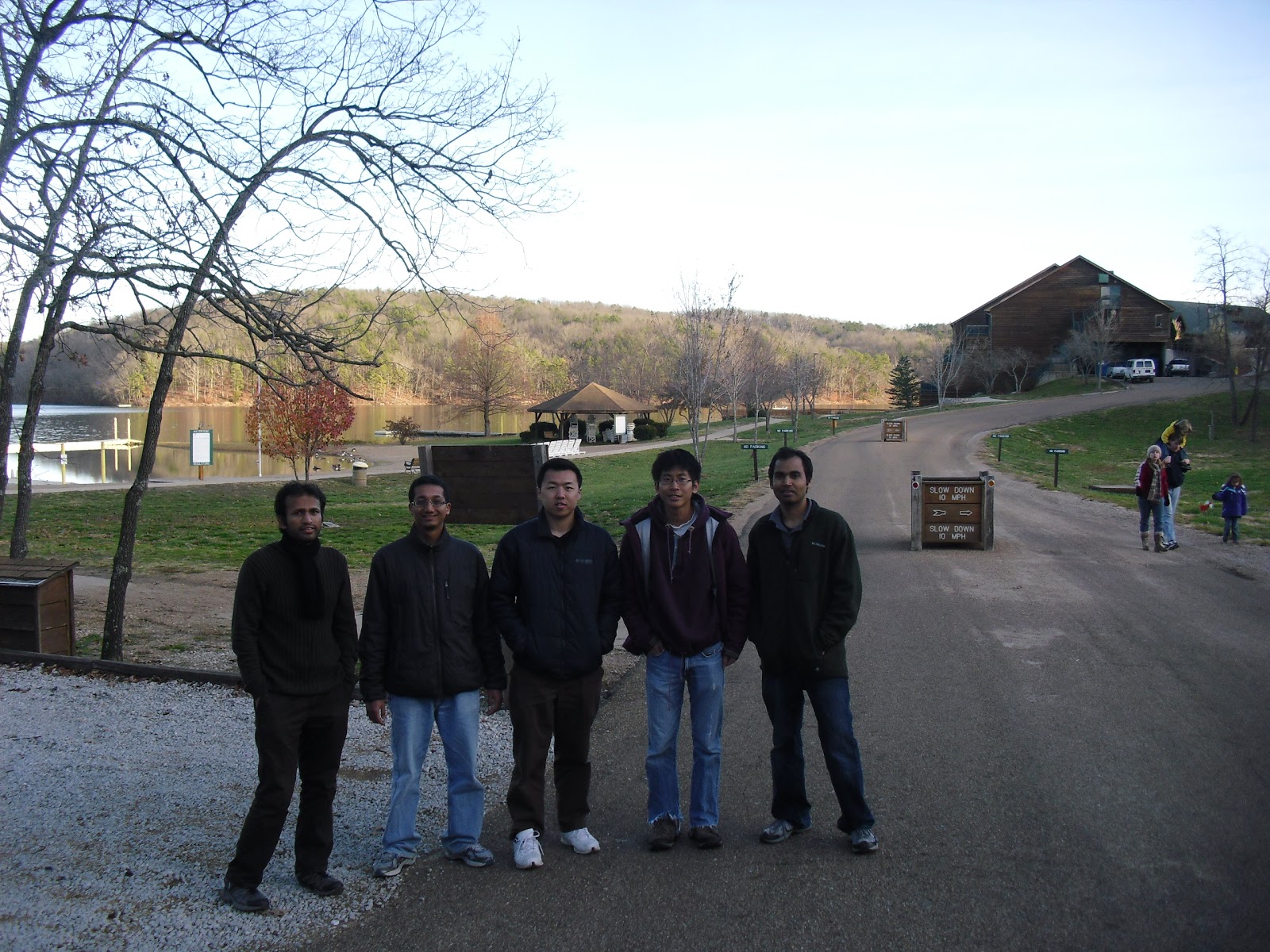 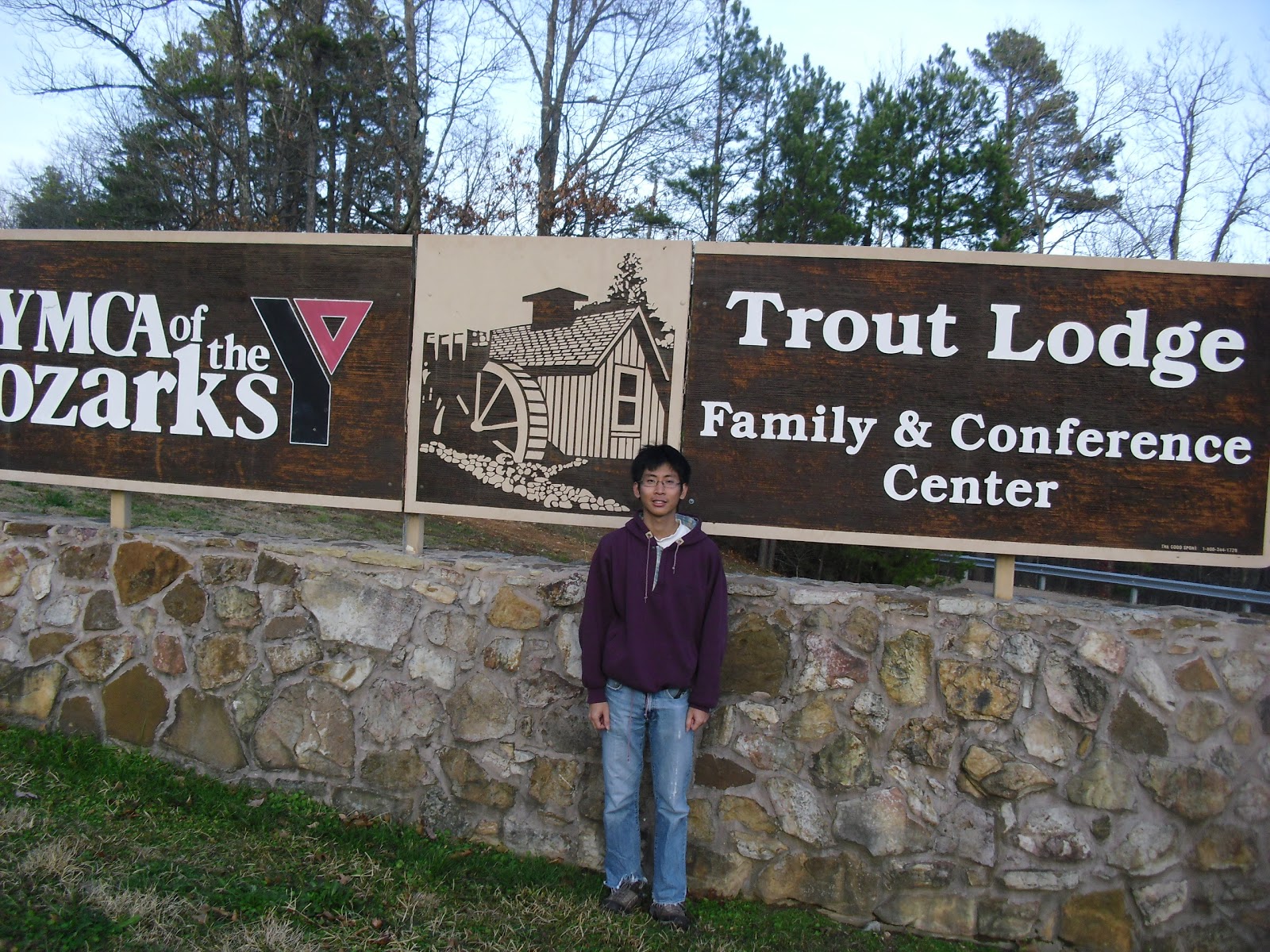 At first we planned to go to a BBQ place in St Louis for dinner, but we left the lodge too late and we expected there would be too many people, so we went to St Louis downtown to look for food instead.  I suggested a restaurant that I was there 3 weeks ago, but I forgot the name.  Now we found out the place was called the Bailey’s Range.  We had some good burgers and shakes. Then, we drove back to Champaign. 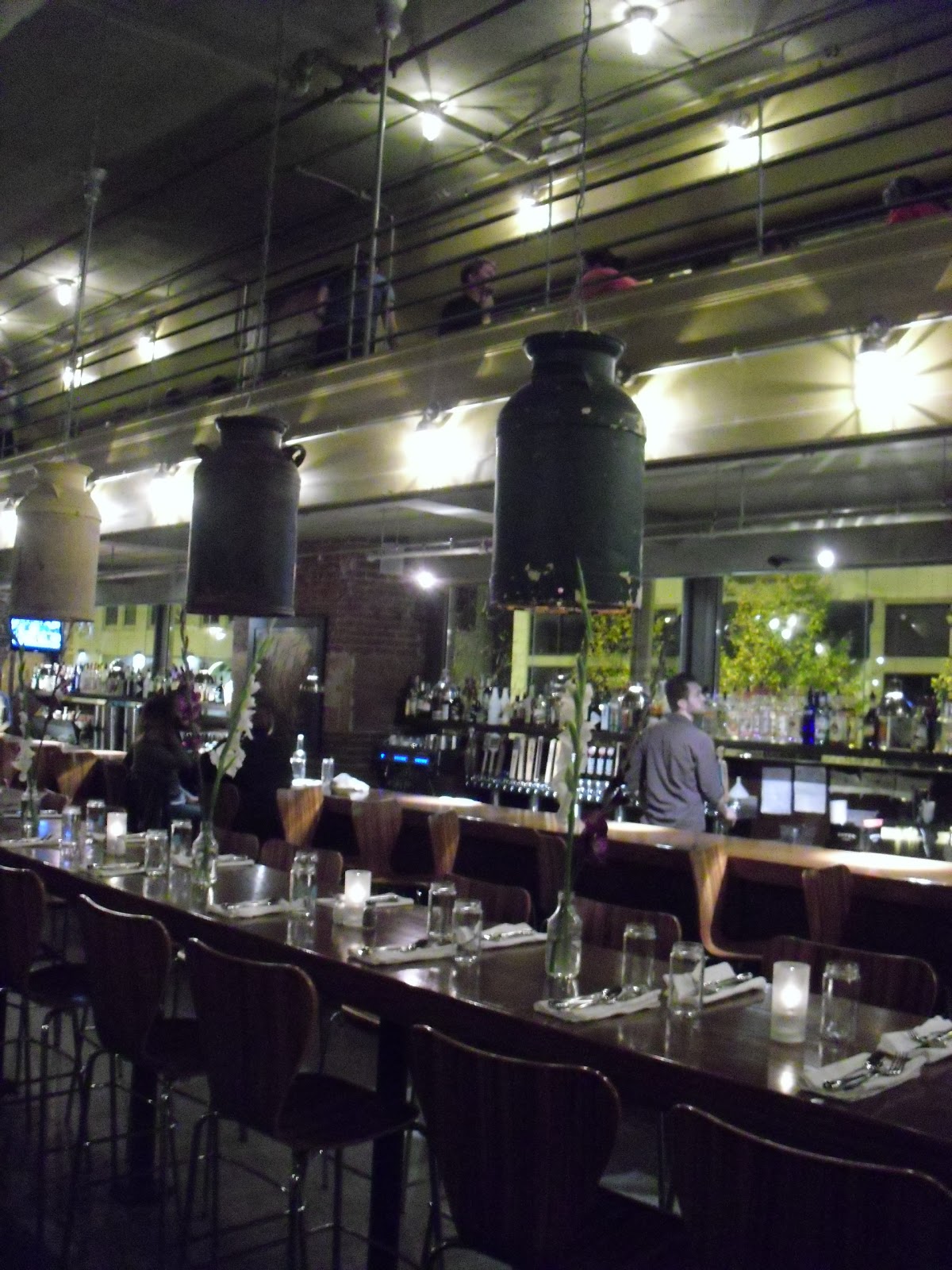 The day after the event, I scanned the maps into the computer and overlaid two maps.  The other map looked so small compared to the large map!  This gave me insights on how I could improve my route choice: even if I did not get lost and run longer, I should not use the blue alternate routes.  I should go back to B after finding #32.  Then, I should try to sweep the points on the small map.  The control points on the small map were very close to each other, even though their scores were 10 or 20 points.  It may worth sweeping them to get 90 points without covering too much distances.

In summary, I was excited with this event before, during, and after this event.  Somehow I think this was the best St Louis thanksgiving orienteering event (Turkey-O) that I had even been.  Many strange things in this event made the event special.

(Acknowledgements:  Thanks for Boon Chong's pictures!)
Posted by johnayuen at 4:23 AM